Home Foodsguy Noodles Vs Pasta – What’s The Difference?
FoodsguyThis vs That

Noodles Vs Pasta – What’s The Difference? 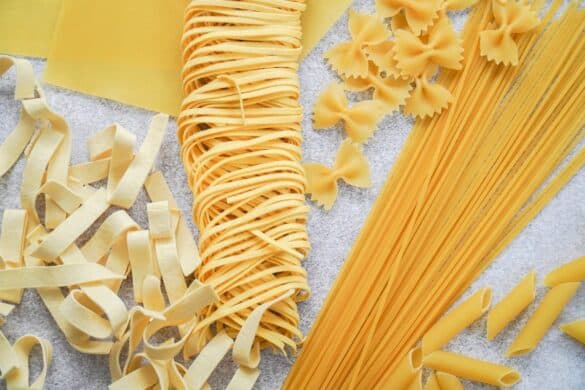 When you’re cooking spaghetti, do you refer to it as pasta or noodles?

There are a number of different types of pasta and noodles out there and they are very similar but not technically the same thing.

Noodles and pasta can both be incredibly versatile and are easy to mistake for one another because sometimes they look exactly the same.

When it comes to picking out noodles or pasta, it can be important to know the differences.

While they have subtle differences, those characteristics have the potential to dramatically affect your dish and how it turns out in the end.

In this guide, we will walk you through a complete review of noodles and pasta.

We will take you through an overview of each of these items and share things like the ingredients used in them, their textures and shapes, and even the types of dishes they can be used in.

All of this will be covered to help give you a complete understanding of just how different they are.

Stick with us to learn more about the differences between noodles and pasta!

We mentioned earlier that noodles originated from Asia. Noodles are typically made to be softer because the type of wheat they are made with is also softer.

What happens is that softer wheat actually makes noodles have a lighter color, while also feeling silkier to the touch as well. Noodles tend to cook quickly and they get very soft very quickly.

Noodles don’t usually have sauce on them but they may be served in broth or potentially a stir fry or soy sauce as well when they are prepared. It’s not like traditional pasta sauces.

With that in mind, there are always changes and new recipes available that may incorporate sauces into the recipe.

One of the biggest differences between noodles and pasta is how the noodles are made. This is what makes them different in the end.

It can be done by hand but is typically done by rolling machines now. They can create different forms of noodles with varying thickness and sizes as well.

At the end of the rolling, the noodles are cut to a specific length. After cutting, they are placed for drying.

They dry for a minimum of 30 hours and then are cut further and packed up for distribution or use. Of course, with modern technology, there are quicker production methods out there as well.

Noodles typically are made in long strings that closely resemble spaghetti pasta. We name spaghetti here just for comparison. The texture will be different, being more silky and smooth as compared to the robustness of spaghetti.

Noodles are traditionally not made into different shapes. They are typically just long strands of the noodle. However, they may be cut into different lengths and different thicknesses as well.

There are several different types of noodles such as udon or soba noodles, which are different based on the thickness of the noodle itself.

There are quite a few different types of dishes that can be made with noodles. They are really versatile. What you will find is that most of the dishes made with noodles are Asian dishes and that is because of the origination of the noodle.

Here are some common dishes that are made with noodles that you might recognize:

Now, let’s move on to pasta.

Pasta originated from Europe and it may look very similar to noodles at times. However, pasta comes in all sorts of shapes, sizes, and textures, and there are a myriad of options that fall into the pasta category.

Pasta is typically made with a durum variety of wheat, which is harder than the wheat used for noodles. This durum wheat gives pasta that golden tone and it makes it slightly harder to the touch and firmer to bit into.

Cooking it does soften it but it will still be slightly more firm and also have an almost elastic texture to it.

Pasta generally is served with a sauce of some sort. The sauce may be something as simple as oil and parmesan or garlic or it may be much more complex.

There are a ton of different sauce options that can be paired with pasta. Italian dishes are great examples of pasta uses and sauce options.

Pasta dough is extruded to prepare the pasta. The dough is created and mixed together and kneaded. The dough is then pressed and extruded into whatever shape or size is necessary to create the specific pasta in question.

The texture of pasta is slightly elastic to the touch, particularly once it has been cooked. It is firmer than noodles but still pliable and versatile. It will be slightly stronger because of the nature of the durum wheat used.

In addition, pasta is made in such a way that the sauce actually sticks to it and mixes with it well. It absorbs and holds the sauce in some manner.

Here are some of the most common types of pasta

These are just a few. There are numerous pasta types and shapes that are not in this list but it gives you some of the most common ones.

Now, let’s compare some of the dishes and uses for pasta. Pasta is versatile and is typically paired with a sauce.

Here are some of the most common dishes:

Again, there are a number of dishes and recipes that can be made with pasta. This list really could be endless. Feel free to try new things and search for inspiration as well. These are just some popular options.

Ok, now that we’ve talked about the differences between noodles and pasta let’s do one final comparison and review of them.

Noodles and pasta can be similar but they really are very different and are used differently.

Noodles come in just a few varieties and are primarily used for Asian dishes. Noodles are used for things like stir fry, soups, and similar dishes and are usually paired with a broth or soup of some kind.

Noodles tend to be soft and tender and maybe slightly silky in texture and touch.

In contrast, pasta is slightly harder but is still soft when cooked. It just has a firmer overall texture and build.

Pasta is a much larger category than noodles. Pasta comes in a ton of different shapes and sizes.

Pasta is also typically served or paired with some sort of sauce. It can also be served with something like oil and parmesan or along those lines.

Up Next: The 7 Best Substitutes For Mustard Seed

The 7 Best Substitutes For Mustard Seed