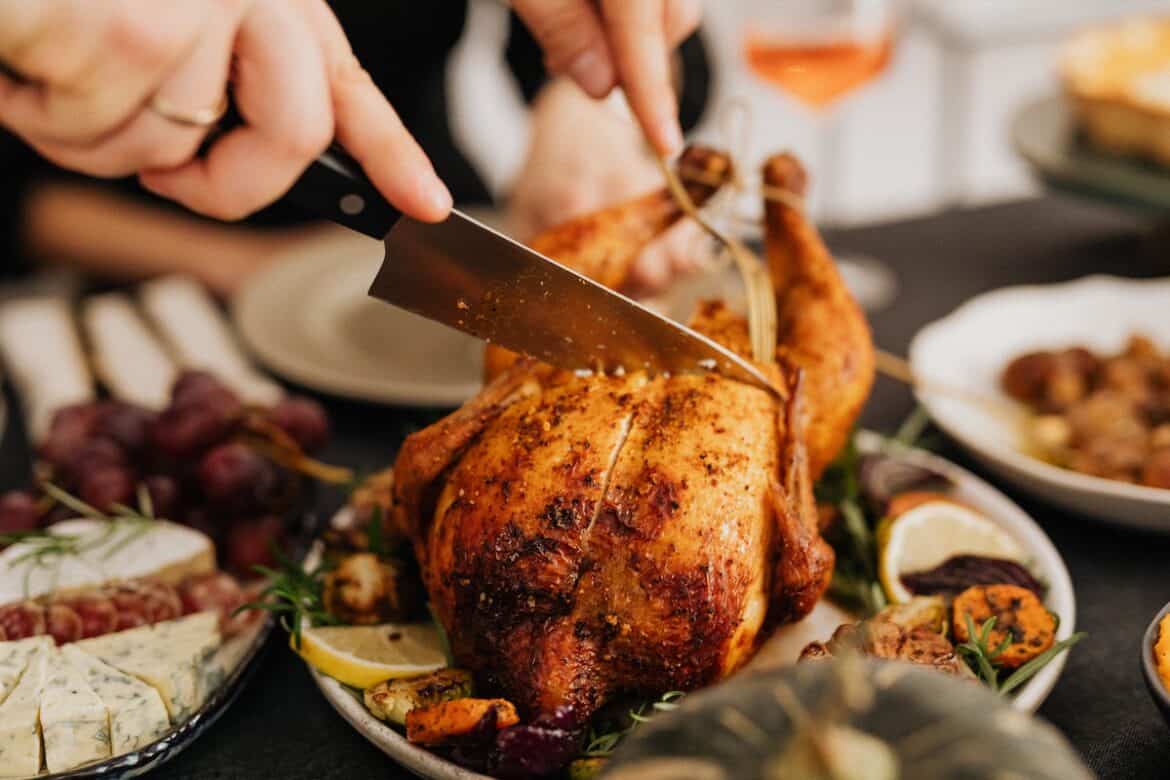 For years we’ve been referring to chicken as white meat, but what if the classification of chicken meat actually falls into a grey area?

Or have we just completely gotten it wrong all this time? Can you even imagine chicken as being red meat?

The answer isn’t as simple or straightforward as a simple yes or no. There are many factors to take into consideration.

Still, confused? Don’t worry! We were just as confused about all of this; it’s like your world is turned upside down, but everything will make sense in a second.

Today, we will be looking at this much-debated topic. We will first discuss what exactly makes white meat and red meat different and then look at chicken specifically. We will also look at how they differ in structure and even uses.

What Is Red Meat?

What is the first thing that comes to mind when thinking about red meat? Probably a nice thick piece of juicy steak, a delicious roasted leg of lamb, or even a rack of smoky ribs, right?

The most obvious visual characteristic of red meat is that it is red when it is raw and has a much darker red-brown color once it has been cooked. Red meat traditionally includes beef, lamb, pork, veal, goat, and venison.

Red meat has a red color because of the high amounts of myoglobin in it. Myoglobin is a highly pigmented protein that has the ability to hold oxygen in the muscle.

According to nutritional science, any meat that contains a lot of myoglobin proteins is defined as red meat. White meat has low amounts of myoglobin meaning the meat itself isn’t as pigmented and lighter in color, aka white.

Some have even questioned whether or not pork classifies as red meat due to its lack of color. Pork contains more myoglobin than traditional white meat and fish and therefore is seen as red meat.

It has been considered bad for your health because it often contains saturated fats and can contirbute to high cholesterol. This can be controlled by eating lean cuts of red meat rather than the fatty parts.

Processed red meats that are pumped full of hormones should be completely avoided. This meat often tends to hold little nutritional value.

We would highly recommend choosing organic red meat products which are rich in a wide variety of nutrients and tends to be less fatty. This is also a more environmentally friendly option.

What Is Chicken Meat?

Chicken meat is probably one of the most popular animal products around the world. It is used in virtually every single cuisine in existence! This is mainly due to the fact that it is much more affordable compared to larger animals.

Other reasons for its popularity are that it is easy to come by, it has a very neutral flavor profile that pairs well with a wide variety of other ingredients, and because it is very easy to prepare and cook.

White fibers are used for movements that are quick and short. The fibers convert carbohydrates into energy within the fibers.

Red fibers on the other hand are used for movements that are prolonged and energy consuming, such as standing and walking—all the parts that are basically constantly active and being used.

Fat fuels these fibers, which is also why these fibers tend to be more flavorful than parts that contain only white fibers.

Chicken meat usually contains a combination of both types of fiber, although one fiber will be more dominant than the other in certain parts and this will then also determine whether it is white meat or red meat.

Red meat versus white meat has been an ongoing battle for decades. Everyone has their own opinion on this matter based on their personal preferences and diets.

Some diets eliminate consuming red meat and others promote it. In our opinion, everything consumed in moderation is good.

Red meat has both pros and cons, just like white meat. Red meat contains protein, vitamin B12, iron, and zinc. However, red meat also tends to be higher in saturated (unhealthy) fat and lower in polyunsaturated (healthy) fat.

White meat has always been considered to be a healthier protein option and is also much more affordable than red meat.

Overall, white meats are considered leaner types of protein due to their lower fat content.

Neither is “easier to prepare” compared to the other. Each has easy parts and very difficult parts. Both can be undercooked or overcooked, and get a variety of unappealing flavors and textures.

Red meat tends to be tougher than white meat because the red fibers perform prolonged actions, toughening the muscles.

Overall, time-wise, red meat has tougher protein fibers which will take longer to cook compared to white meat. The protein fibers of white meat aren’t as tough so they will cook relatively quickly.

It is widely known and agreed upon that red meat or dark meat is more flavorful compared to white meat.

This is because of the myoglobin protein content. These protein fibers are exercised more and therefore much more flavorful.

This does not mean that white meat isn’t delicious, but when eaten as is, it is less juicy and flavor-packed. All sorts of tricks need to be used to enhance the flavor of white meat.

Chicken has always been classified as white meat, but it is technically incorrect. Although the majority of a chicken is white meat, some parts of the chicken are classified as red meat because of its high myoglobin protein content.

Red meat contains more myoglobin protein fibers that are developed in areas that are constantly being used. So, by that definition, any part of the chicken that is actively being used for prolonged periods of time is probably red meat.

This includes its legs (and various sections of the leg like the drumstick and thigh). These pieces contain mostly red fibers and are red meats.

Other parts of the chicken that aren’t used as often or actively, as the chicken breasts and wings, are considered to be white meat. They contain much less myoglobin and are whiter in color.

White chicken meat (breast and wings) and contain only 10% red fibers which are why it is known as white meat. White meat’s flavor is very mild and contains little fat, which is also why it overcooks quickly.

The lack of fat also means that white chicken meat is lower in calories compared to red chicken meat.

Red meat is found in the chicken legs and contains about 50% of red protein fibers, which is why it is called red meat. This explains why you sometimes bite into a perfectly cooked piece of chicken and it still has a slightly pink hue.

The red chicken meat cuts are more juicy and flavorful due to the higher amount of fat present and can be cooked for longer periods of time.

Red meat contains more calories due to the higher fat content, but also has higher levels of iron, zinc, and vitamin C.

How To Prepare And Cook Chicken Meat

White and red chicken meat both have different properties, therefore it is important to prepare and cook each in a different way to ensure you get the best qualities (flavor and texture) of each.

Regardless of which type of meat it is, always cook your chicken until it reaches an internal temperature of 165°F.

This will kill any harmful bacteria including Salmonella.

Always remember that the chicken skin contains a high amount of fat. Using it with your chicken piece will help add moisture and juiciness to the final product, but will also add fattiness which isn’t too good health-wise.

How To Prepare White Chicken Meat

White meat, which includes the breast and wings, contains less fat, therefore the meat will dry out much quicker.

White chicken meat shouldn’t be cooked for long periods of time – you still have to completely cook it!

Added fat or a basting sauce can help prevent the chicken from drying out by adding extra moisture. When white meat becomes dry, it gets a very rubbery and bland texture and flavor.

White meat is also has a much milder flavor, so make sure to add enough seasoning ingredients to help enhance the natural chicken flavor.

This is one of the reasons a ton of people prefer red chicken meat over white chicken meat.

Quick methods such as grilling, sauteing, and stir-frying are recommend for white meat. Ensure that the chicken is cooked all the way through (the meat should be white and not pink when cut through).

How To Prepare Red Chicken Meat

Red meat, the chicken legs, contains much more fat, which means the meat can be cooked for a longer period of time without drying out. This means this type of meat is perfect for roasting or slow cooking!

Red meat is juicy and flavorful, so less seasoning and flavoring ingredients are needed to add extra flavor.

Red meat tends to be tougher than white meat due to the fibers working harder, therefore it is recommended to cook the meat longer, so it is more tender. Red meat is almost impossible to overcook, so make sure to cook it until it is tender!

Methods such as deep-frying, roasting, stewing, and braising are recommended for red chicken meat.

Up Next: How To Use A Toaster

How To Use A Toaster – The Complete Guide