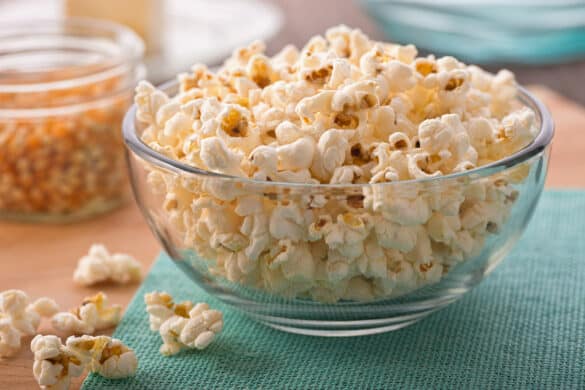 Nothing compares to the light and fluffy texture of popcorn! But what about the times when you’re craving something to snack on while watching a movie, yet want to eat something healthier than popcorn?

Continue reading to learn more details about these healthy popcorn substitutes and how each of them compares to popcorn in terms of flavor and texture!

What Is Popcorn Anyway?

Popcorn is one of the most popular snack foods. Many people even think that popcorn can be made from popping any kind of corn. This isn’t true!

Sweet corn on the cob, along with some other varieties of corn, will never pop.

Corn varieties that pop are cultivated specifically for that purpose, so there are several types of corn that pop.

The Zea mays everta variety is the most popular variety used for popcorn. Each popcorn kernel is filled with starch and contains a droplet of water.

The process of making popcorn is always fun. It is interesting to watch how the tough yellow kernels pop into cloud-like crunchy bits. How does this happen?

When dry corn kernels are heated, the moisture inside them turns into steam. The steam creates pressure and the kernels pop. The white fluffy stuff that is our favorite part of popcorn is actually the starch!

The flavor of plain popcorn is quite neutral. It is most often salted and flavored with butter and various other ingredients, such as spices or sugar.

Popcorn is a whole grain rich in fiber and antioxidant polyphenols. Air-popped popcorn is a great snack as it is low in fat and is more filling than most other snacks.

The high antioxidant content of popcorn makes it good for blood circulation and digestion. Popcorn also contains such vitamins and minerals as vitamins B6, A, and E, thiamin, calcium, potassium, etc.

So, popcorn can be a healthy snack option if you prepare it right, i.e., air pop it instead of using oil or butter.

If you eat pre-made popcorn, or pre-popped, make sure to check the ingredient list for any preservatives and artificial additives as well as to make sure it doesn’t contain a high amount of salt or sugar.

Are There Any Popcorn Substitutes?

You may need a popcorn substitute for a few different reasons. Maybe you’re allergic to corn or simply in need of a new movie snack that is even healthier than popcorn!

Luckily, there are a few great snack options that work great as a popcorn substitute. Some of them even pop and puff like popcorn!

If popcorn is one of your favorite movie snacks but you want to change it up a bit from time to time, here are some of the best substitutes for popcorn.

While these foods don’t have the same unique texture as popcorn, they are still healthy and fun to snack on!

We recommend you consider the flavor, texture, method of preparation, as well as nutritional value of the popcorn substitute you want to use.

Sorghum is one of the few grains that can be puffed like popcorn.

Similar to popcorn, sorghum is also low in fat but high in fiber. This cereal grain is a good source of vitamins, minerals, and antioxidants.

Just like popcorn, you can pop sorghum on the stove or in the microwave. Once popped, sorghum looks pretty much like popcorn, but smaller. Because they look similar, it’s easy to guess that popped sorghum has a texture similar to popcorn!

Unlike popcorn, which has a neutral flavor, sorghum is mildly sweet though you can use your favorite spice mixes to flavor it.

Quinoa seeds can also be popped, though they don’t puff the same way popcorn and sorghum do.

When quinoa seeds pop, they become slightly bigger than unpopped quinoa. The best method to pop quinoa is the stovetop method.

Popped quinoa seeds lack chewiness, but are light and crispy with a pleasant nutty flavor. Just like popcorn, you can flavor it to make it sweet or savory.

Like popcorn, popped quinoa is gluten-free! It is rich in protein, but is considerably higher in calories compared to popcorn.

For comparison, a cup of popped popcorn contains only 31 calories while the same amount of puffed quinoa contains nearly 280 calories.

Another seed that pops and can be enjoyed as a snack instead of popcorn is amaranth.

Amaranth puffs like popcorn, but it doesn’t get as big as popcorn. You can pop amaranth in the microwave or in a heavy-duty pan.

Puffed amaranth is softer than popped popcorn and slightly nutty in flavor. You can season amaranth using your favorite spices.

Amaranth is rich in fiber and protein. It is also a good source of such minerals as iron, phosphorus, and magnesium. Amaranth is higher in calories than popcorn.

Millet is a small, round whole grain that can be popped and puffed the same way as popcorn.

Heat a pan on the stovetop, add some dry millets into it, and shake until you see the small grains pop!

Millets pop like popcorn, but they are a lot smaller. They are gluten-free, rich in protein, packed with antioxidants, and very high in calcium.

You may be surprised to learn that you can pop buckwheat, too!

Buckwheat seeds are smaller than popcorn kernels. When they pop, they look like very small or barely popped popcorn.

Popped buckwheat seeds are perfectly crunchy and light and have an amazing nutty and toasty flavor.

Popped buckwheat is low in calories and carbohydrates. It is also gluten-free, rich in fiber, vitamins, and minerals.

Puffed barley doesn’t look much like popcorn, but it tastes similar to it. When you heat barley, it puffs and splits.

Unlike light and crispy popcorn, barley puffs are soft and chewy. But they both have a nutty and toasty flavor.

Puffed barley is low in calories and high in fiber. Barley is also a good source of B vitamins, yet is high in gluten.

To make barley puffs, simply put a handful of barley in a hot pan just like you do popcorn kernels!

Cauliflower popcorn is not the closest popcorn substitute in terms of flavor and texture, but it is certainly one of the healthiest.

This cruciferous vegetable is incredibly filling. It is rich in fiber and B-vitamins as well as minerals and antioxidants.

Cauliflower is very low in calories, but provides a high amount of protein which keeps you full longer.

To make cauliflower popcorn, all you need to do is to cut the florets into popcorn-size pieces, season them, and then drizzle with olive oil. Bake the cauliflower florets in the oven until they are crispy!

Water lily seeds are not as widely available as most of the options on this list, but these seeds are a great substitute for popcorn as they puff like popcorn and have a similar texture.

Puffed water lily seeds are crunchy and airy. They have a mild flavor that can be customized with the help of various spices.

Despite the similarities in texture and flavor, water lily seeds are said to be healthier than popcorn as they contain less fat and more protein.

The name “wheat berries” refers to the edible part of the whole wheat kernel.

Though wheat berries don’t puff like popcorn, they do crack and turn into a healthy and crunchy snack.

Wheat berries have a mild nutty flavor. You can season them with salt to make them resemble popcorn. You can also get creative and make a sweet snack out of popped wheat berries by mixing them with some honey and cinnamon!

You can buy pre-puffed rice instead of popcorn next time you organize a movie night.

Puffed rice has a light and crispy texture. It has a neutral flavor and can be used to make both sweet and savory snacks.

Puffed rice contains antioxidants and various nutrients. Puffed rice is low in calories, but higher in carbohydrates. If you are trying to cut down on carbs, puffed rice may not be the best popcorn substitute for you.

Kale chips don’t offer the same texture and flavor as popcorn, but they are still an amazing snack!

Unlike the potato chips we all love, kale chips are rich in fiber and antioxidants. These green chips are crunchy and chewy and taste amazing when properly seasoned!

Kale chips are higher in vitamins and minerals than popcorn — this is the main reason we recommend you eat kale chips instead of popcorn from time to time.

Kale chips are low-calorie, fat-free, and rich in fiber, antioxidants, and a range of vitamins and minerals.

Can Popcorn Expire? – Everything You Need To Know

Hulless Popcorn – Myth Or Fact (And What To Buy)

Is Popcorn Vegan? – And The Best Vegan Popcorns