Home Foodsguy Rye Berries Vs Wheat Berries – What’s The Difference?
FoodsguyThis vs That 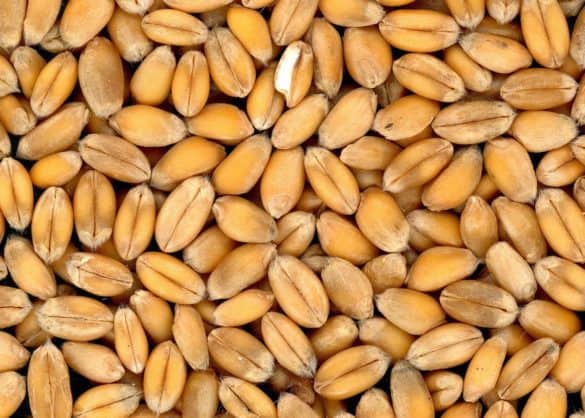 If you’ve ever gone shopping for bread, you’ve probably come across common white bread and rye bread. They’re both made from grains within the wheat family, though rye is a lot heartier and is considered an ancient grain.

This article will look more closely at the differences between rye and wheat berries.

What Are Wheat Berries

Simply put, wheat berries are the whole grain of wheat, with the hull removed but no other processing done to the kernel.

They have a complete germ, endosperm and bran, and all the nutrients that can be contained within the grain.

The more processing that is done to wheat, the more nutritional value is shaved off.

Common wheat has been altered over the generations to produce a strain of wheat that has a high yield, bringing costs to manufacture as low as possible.

About 95% of the wheat produced worldwide is common wheat.

This genetically altered, domesticized wheat has short stems, allowing farmers to use a substantial amount of fertilizer without worrying that the plants themselves are going to grow too large.

Only the wheat berries flourish, highly compacted into the ears of the wheat.

The combination of genetic manipulation and excessive use of chemical fertilizers and pesticides dramatically impacts the nutritional value of common wheat, making it not just less healthy, but in many cases unhealthy for consumption.

You can find hard red wheat berries on Amazon.

What Are Rye Berries

Rye berries, in contrast to common wheat berries, have been somewhat domesticated but are still considered an ancient grain, not manipulated by science.

Because of this, it has retained a more complex and diversified nutrient profile than common wheat.

As a crop, it doesn’t have as high of a yield as common wheat, but it does have some significant perks.

It grows well in soil that is considered poor for the majority of other cereal grains and it also weathers the cold quite well.

They can be bought and used in much the same way as most other whole grains – as the grain itself and as flour, which can be used for any style of baking.

As a whole grain, the nutritional profile of rye berries is quite similar to hard red wheat berries, the most common class harvested in the US, though they are slightly lower in carbs and have a bit of a higher density in their vitamins and minerals.

100 grams of red wheat berries has the following basic and approximate nutritional profile:

Rye berries have much the same macro-nutrients, vitamins, and minerals as wheat berries, but they’re lower in gluten, so it can be easier on the digestive system for anyone with a slight intolerance to gluten.

Rye berries also have a lower glycemic load, which means they’ll have less of an impact on your blood sugar levels, which is good news for diabetics and anyone who is insulin resistant.

Whole wheat and rye berries also have plenty of additional vitamins and minerals that are highly beneficial to a balanced diet.

Thiamin and niacin are both B vitamins that you can get in good quality and quantity in wheat berries, along with B6 in slightly more limited yet still significant supply.

Wheat berries of all varieties are excellent sources of the minerals manganese, selenium, magnesium, phosphorus, copper, iron, and zinc.

The variation in nutrition between a high-quality wheat or rye berry is minor, so your best bet is to get the highest quality berry that you can, of either variety.

Organic is always going to be best, especially when it comes to a crop that is traditionally subjected to a lot of synthetic fertilizers, herbicides, and pesticides like wheat.

If you do have a slight gluten intolerance, you may find that your body adapts and digests rye berries and rye wheat products better than common wheat, though there is no guarantee.

You also might want to try both varieties and see which one pleases your tastebuds more, as rye tends to have a richer, more nutty flavor than regular wheat berries.

How To Eat Wheat Berries

You can eat both common hard red wheat berries and rye berries as a whole grain, much like you might eat a serving of rice. They work really well in soups, stews and chili dishes because the complexity of a whole grain stands up well to liquid and it won’t turn into mush, but will retain it’s slightly chewy texture.

Wheat and rye berries also make for interesting risotto, pilaf, and tabbouleh dishes, giving you a bit of a break from your traditional presentation style.

You don’t have to relegate wheat or rye berries strictly to savory suppers, either, as they’re just as delicious at lunch or even breakfast, and they’ll keep you feeling full and satisfied through your busy day.

Many people also enjoy wheat berries made into a type of porridge, combined with their favorite flavors like apples and cinnamon or peaches and coconut cream. A serving of rye berries also adds a lot of filling satisfaction to a simple salad or creative wrap for lunch.

How to Sprout Rye Berries

Another interesting and tasty trend in the world of wheat is sprouting it. Sprouting your grains can help make them easier to digest and increase their nutritional value.

Sprouting is exactly what it sounds like – turning a grain, much like a seed, into a tiny, growing plant. It’s relatively easy to do and only takes a few days.

The result is delicious wheat berry sprouts that can be used in salads, sandwiches, breakfast cereals, and even turned into flours for bread.

To sprout your wheat or rye berries:

The Difference Between Wheat and Rye Flour

As you can probably imagine, when wheat or rye berries are ground up, they create flour. This is where the nutritional profile really begins to separate from each other.

Common wheat goes through many additional processes to create “white” flours, such as all-purpose, bread or pastry flour.

White flour makes up the bulk of all baked goods around the world, but the process to create it strips almost all of the nutritional value out of the flour, leaving you with a lot of carbohydrates and calories and very few vitamins, minerals, or even protein and fiber.

Whole wheat or rye flour is made by using the entire wheat berry, bran, and all. This creates a heavy final product with a lot more nutrition left inside as well.

To give you some hard data, 1 cup of all-purpose white flour has the following nutrition:

Both whole wheat flour and rye flour, in comparison, have fewer calories and carbohydrates and substantially more protein and fiber.

Just as importantly, the antioxidants, vitamins, and minerals that are stripped away entirely in the process of creating white flour are mostly retained for consumption in whole-grain flours like rye.

How long do wheat berries last?

If you’ve got whole grains, the full berry whether it’s wheat or rye, it will last up to 6 months if properly stored. To ensure freshness and keep your wheat safe from mold, store them in an air-tight container in a cool, dry place out of direct sunlight.

Cupboards or pantries are perfect. You can also keep them in your freezer, in which case they’ll last for up to a year.

Can you cook wheat berries in a rice cooker?

Yes, you can absolutely cook wheat and rye berries in a rice cooker! Whole grains are tougher than simple white rice though, so they will take longer to cook.

It’s helpful to soak your wheat berries for an hour or so before draining and then putting them in your rice cooker. You’ll need 2 cups of water for each 1 cup of wheat or rye berries and they’ll take about 35 minutes to cook.

Can you eat raw rye berries?

While cooking rye berries are the most common way to enjoy them, they can be eaten raw, yes. If you’re following a raw diet or would like to eat them raw for any other reason, you’ll want to first either soak and, preferably, sprout them first to make them more digestible.

If you have a sensitive stomach, however, raw grains of any kind are likely to aggravate your condition.

Can You Reheat Kebab? – Is It Safe?