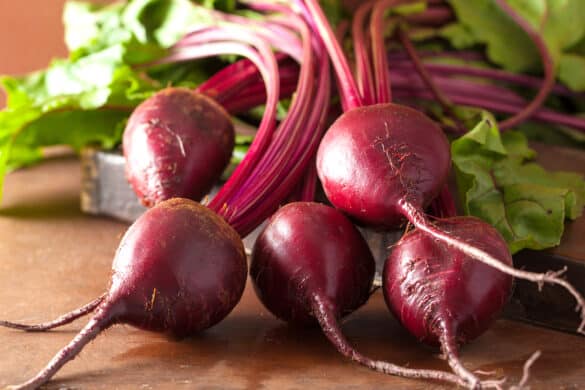 Beets are a scary food for many people because it is widely rumored that this root vegetable tastes like dirt. This is a completely unfair characterization that this article aims to correct.

What do beets taste like? When beets are washed and prepared properly they have an earthly, almost floral flavor with a hint of sweetness. Depending on the variety and the preparation of the beet, that sweetness may be more pronounced.

Raw, roasted, pickled, and canned beets all have different flavors and in this article, we’ll do our best to describe them all and give you tips on how to cook and prepare them.

Did you know that a huge portion of the refined white sugar you eat is made from beets? It’s true!

Sugar beets are admittedly not the same as the red or purple beetroot we’re used to buying to cook with dinner, but they are in the same family.

Beetroot is not as sweet as sugarbeets, but it does have a remarkably high sugar content that comes out beautifully if you know how to prepare your beets right.

Many people are terrified of beets, determined to believe that they taste like dirt. And, in all fairness, they can be a bit earthy in flavor, particularly if you are not used to them.

They’re a root vegetable and the soil will cling to them. If they’re not properly washed and cooked, your beets could have a dull, earthy flavor that verges on muddy.

But this is when beets are done wrong.

A beet that is properly prepared is sweet, with an almost floral hint of flavor and a juicy crunch that is undeniably purple.

If you enjoy spinach and mushrooms, you’re more likely to enjoy the flavor of beets as well. If you’re highly sensitive to the smell in the air after a rainstorm, you may be less likely to enjoy beets.

A compound called geosmin is responsible for the earthy tastes of spinach, mushrooms, and beets and it’s also what creates the smell after a rainstorm.

Some people are more sensitive to this aroma and flavor than others, and this could influence your preference for or against beets.

Golden beets taste pretty much exactly like traditional purple beets. If you notice a difference in the flavor, it’s probably in your head, and that wouldn’t necessarily be unusual.

We enjoy our food with our eyes and noses almost as much as with our tastebuds.

Most of us have a preconceived idea of what certain foods taste like and our brains, powerful organs that they are, will influence our tastes to give us what we believe to be true.

The lighter the color of the food, the lighter flavor it often has. Of course, this is not always true – certainly not for onions or garlic.

A golden yellow beet may be slightly less earthy and marginally sweeter, but mostly, it tastes the same as a purple beet.

Canned beets are much sweeter and softer than their fresh equivalents. The crunch is muted and somehow that seems to impact the flavor of the beet.

Canned beets have a much milder flavor and are even less likely to retain the ‘dirt’ flavor many associate with them.

Beets are commonly home canned, and that process may involve either salt or sugar. So the end result may be more sweet or savory, depending on the preferences of the canner.

Pickled beets, depending on how they’re pickled, have a very sweet and sour profile.

The pickling process can be done with added sugar. In this case, the sweetness of the beet will be the defining flavor, with only a hint of fermented tang.

However, beets can also be picked with dill and garlic, similar to the ever-popular dill pickle. This will still be sweet, but the overwhelming flavor would be dill and garlic.

Many people also enjoy pickling their beets with spicy peppers or pepper seeds.

The hot, spicy, sweet, and sour combination is almost confusing to your palette, but it makes an amazing addition to tacos or Mexican food when diced finely and used as a garnish.

How to Cook Beets

Cooking beets can be a messy ordeal if you’re not sure what you’re doing. Beets will stain hands, wood, clothing, and nearly anything else they come into contact with. So be careful not to get the raw juice all over your kitchen.

There is a secret to saving yourself this frustrating hassle: Wash your beets well and then cook them with the skin on.

Once they’re cooked, they will leave some color, but it does not stain as quickly nor as permanently as raw beet juice. Also, the skin will rub off effortlessly, taking with it much of the woody, muddy flavor.

If you peel your beets before cooking them, the flavor of the earth will still be on your beet and it will steep in the water, flavoring your beets.

If you leave the skin on, the dirt flavor will be pulled out into the skin and the water but the flesh of your beets will be protected against it, rather than soaking in it.

The only time you’ll want to peel beets raw is if you’re eating them raw. Even then, blanching them for 2–3 minutes in boiling water then submerging them in an ice bath will make the process much quicker, easier, and less of a mess.

There are many different ways to cook beets. For us, boiling them to half-cooked first, then peeling them and prepping them for the final dish is easiest.

Once peeled you can steam them whole, slice them, fry them, roast them, or puree them and cook them into a soup. Beets are very versatile and their flavor will change depending on how they’re prepared.

How to Make Beets Taste Better

Hopefully, we’ve convinced you to try beets for the first time or give them a second shot. But you’re probably now wondering, aside from cooking them in their skin, how to make beets not taste like dirt?

To bring out the natural sugars in your beet, you want to expose it to heat. Roasting or frying will caramelize the sugars and soften the texture while enhancing the rich earthiness of the root.

If you want to enhance the floral notes of your beets, steaming the beets will brighten the flavor and give you a satisfying crunch.

Tossing the beets in high-quality olive oil and adding some dill or other fragrant herbs like rosemary will tie all the flavors together nicely. This combination is just as good served cold as it is hot.

If you puree the beetroot and cook it in a rich broth, finishing it with heavy cream or full-fat coconut milk, you’ll bring out a more delicate flavor that is quite sweet, yet tempered by the cream.

If your beets are on the older side, they may develop a bitter flavor. To counteract that, you can marinate them with something slightly acidic, simmer them into a red wine sauce, or smother them in a rich, salty garlic sauce.

Beets are root vegetables, so they consist of a sturdy, round root and a tall mass of green leaves.

The root grows under the ground and the leaves, of course, grow above it. The root itself is purple, though the shades range between red and pink. The older beets get, the darker they get until they’re almost black.

A good-sized beet ready to be harvested will be about the size of a tennis ball, but they can grow larger, depending on the variety and how long they’re left in the ground. If beets are grown too crowded, they may not even grow that large.

Their green tops usually have a bright purple stem. Beets’ green leaves are quite similar to swiss chard, though with a thin stalk.

How Should You Eat Beet Leaves?

Beet leaves are packed full of flavor and nutrition and they can be eaten in all the same ways you might eat another type of dark leafy green.

You can swap beet greens for spinach, swiss chard, kale, or bok choy in any recipe, cooked or raw.

Our favorite way to eat beet leaves is very lightly sautéed with some olive oil, fresh-pressed garlic, and a squeeze of lemon juice.

What is the Healthiest Way to Eat Beets?

Almost all vegetables and fruits will lose some nutrition when they’re exposed to heat. Beets are no exception to this rule. To retain as much nutritional value as possible, you want to steam your beets rather than boil or roast them.

Boiling will let the vitamins and minerals soak out into the water. Roasting will break them down due to the extended exposure to high temperatures.

Steaming for 15 minutes or so will cook your beets with the least amount of damage to the vitamins, minerals, and antioxidants.

That being said, the healthiest way to eat beets is any way in which you will eat them. If you hate steamed beets but enjoy them roasted, eating roasted beets will be much healthier than not eating them at all.

Up Next: What Do Leeks Taste Like? – The Ultimate Guide

5 Best Garlic Salts You Can Buy