Home Cooking Tips What Do Leeks Taste Like? – The Ultimate Guide
Cooking TipsFoodsguyHow ToThis vs That 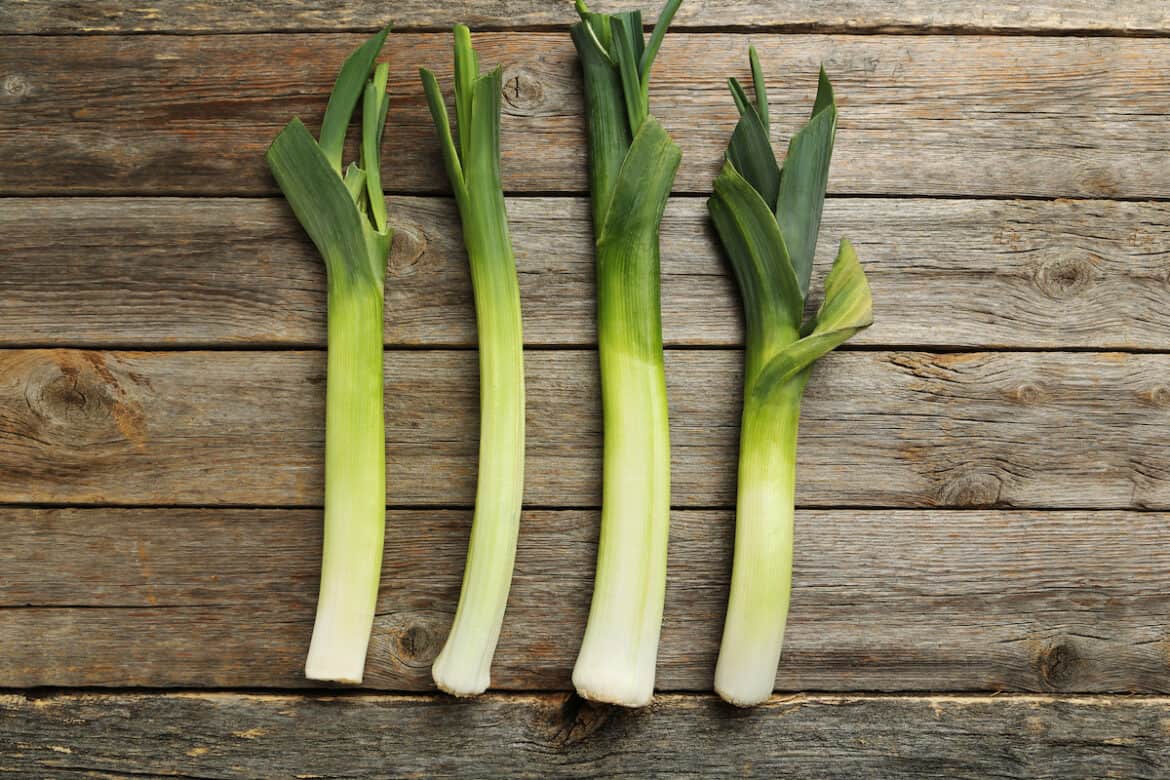 Leeks are undervalued as a vegetable, primarily because they’re misunderstood. They look like a giant green onion so many people assume they taste like one, perhaps more powerful. The opposite is, in fact, true.

What do leeks taste like? Leeks are part of the onion family so they do have an onion-like flavor, but it is quite mild. When cooked they become surprisingly buttery and creamy, adding just a hint of onion flavor to a dish along with a pleasing aroma and texture.

In this article, we’ll explain not only what leeks taste like when they’re prepared in different ways, but also how to properly prepare your leeks so that you can get the most out of the flavor.

Leeks are a member of the onion family though they’re quite unique as a vegetable.

Instead of growing a bulb completely separate from the green leaves that grow above the ground, leeks grow into stalks, with their layers densely wrapped around each other from top to bottom of the entire plant.

If you’re having difficulty imagining what leeks look like, picture a very robust bunch of celery. Leeks grow in much the same way, with each stalk tightly compacted around each other, getting thinner towards the middle of the bunch.

They have wide, flat leaves rather than stalks, however. So the bunch is much denser than you would find with celery and you have many more leaves per leek than you have celery stalks per bunch.

Leeks resemble very large green onions, but they are not the same plant. They are much larger and have a milder flavor.

Green onions have a single, oblong white bulb that grows upward into loose, green leaves compacted around each other.

Leeks are very similar, but they’re leaves are much wider, thicker, and more fibrous and they don’t have a distinctive bulb at the bottom.

Leeks taste very similar to green onions, as previously mentioned, but the flavor is less astringent and much sweeter.

They taste quite different raw from cooked, however. How you cook them will naturally also impact the flavor of your vegetable.

Raw leeks have a grassy, almost herbal quality to them, which is not surprising considering their close relationship to green onions. They can be eaten raw safely, but this isn’t the most common way to eat them.

If you would like to enjoy them raw, slice them very thin into half-moon shapes and add them to salads, coleslaw, wraps, sandwiches, or burgers for the onion flavor you crave but, with less bite.

When leeks are cooked, the flavor and texture changes turn this onion relative into a creamy, buttery vegetable that adds hints of mild onion flavor and a delicate aroma to anything they’re cooked with.

You can also roast or braise leeks, which adds a crisp texture, and the leaves almost melt in your mouth.

They become very buttery, especially if you actually use butter to braise them with. Just a hint of salt and fresh herbs like thyme or rosemary will bring out the caramelized notes from the toasted natural sugars.

Leeks can be used as a substitute for onion in any dish, especially if you find onion a bit too aggressive for your personal preferences or you’re just looking for a milder note for a particular recipe.

In the reverse, onions can also be used to substitute for leeks but the flavor will be much bolder and more striking. If possible, choose a white onion as they have the mildest flavor and are the closest to leeks.

How to Prepare Leeks

Preparing leeks is a bit of a process. They grow in very sandy soil. Dirt tends to accumulate inside the leaves and you definitely don’t want to add any of that to your recipe.

Before you get to the cooking stage you will first have to clean and cut your leeks properly.

How to Clean Leeks

If you’re slicing your leeks into rounds or half-moons, first cut off the dark green top leaves where they start to branch out from the main stalk.

These leaves are much tougher and more fibrous so you won’t want to eat them as is. You’ll still want to wash each leaf and save these tough greens to add flavor to your next homemade soup broth.

Next, pull off the outermost layer of leaves, at least 1–2 deep. Again, these are going to be more stringy and tough to eat, and they’ll also start to expose any underlying dirt.

You will have removed most of the dirt at this point, so you can cut your leeks and then give them a good wash once they’re sliced.

How to Cut Leeks

If you want sliced leek rounds, simply chop off the very bottom of the leek where the roots grow, and then continue making small slices up the leek until it’s all cut.

If you want half-moons, slice off the roots as before and then cut the leek in two, vertically up the length of your leek. Turn each half over so that the flat side is on the cutting board. Then slice them as normal to achieve the half-moon shapes.

Once your leeks are appropriately sliced, transfer them to a bowl of cold water. Use your hands to separate the pieces and gently coax off any remaining dirt, which will fall to the bottom of the bowl, and the leek slices will float.

Remove the leeks by pulling them up and out of the water. Do not pour them out into a colander as this will dump all the dirt right back onto your leeks.

If you’re cooking whole leeks, slice off the bottom very carefully, only removing the fur-like roots but as little of the bulb as you can. Slice the leek down the center lengthwise, starting 1–2” up from the bottom of the leek.

Rinse the whole leek in cool water in your sink, holding the bottom facing upwards so that any dirt can flow into your sink, rather than back into the vegetable. Gently pull each leave apart and rub the dirt off as necessary.

For those of you who prefer to learn by watching, check out this video by Clean & Delicious on how to clean and cut leeks. Enjoy!

How to Cook Leeks for Optimal Flavor

Leeks are lovely when raw, but they are luscious when cooked. The texture is creamy and buttery which brings depth to a collection of roasted vegetables as well as richness to creamy sauces.

Leeks temper salty dishes very well and lighten a heavy cream sauce or soup. If you combine these two qualities you’ll understand why potato leek soup with bacon is one of the most popular ways to cook with this vegetable.

Roasting leeks also brings out the flavor, slightly caramelizing the natural sugars so that the outer leaves get melt-in-your-mouth crispy while the inner layers turn to a buttery mash.

Of course, you can also saute leeks into a stirfry. But there the flavor is so mild that it will usually be lost in whatever sauce or seasoning you use.

They have thick green leaves that grow straight up, densely packed within each other, and a white bulb, cylindrical bulb. The bulb of a leek doesn’t go round, like an onion, but it stays in line with the greens.

The white of the bulb travels upwards, slowly turning to a light green and deepening as it grows up until it reaches a dark, rich green at the top of the leaves.

At the bottom of the bulb, there are fur-like root tendrils that should be chopped off before eating.

Can You Eat Leeks Raw?

Yes, much like green onions, leeks can be sliced up and added to fresh salads raw.

Or they can be sautéed, roasted, added to soups and stews, or used in nearly any other cooking methods you can think of. Most people, however, enjoy leeks best cooked.

Another common question is whether you can roast leeks – and indeed you can.

The simplest way to prepare leeks for roasting is to slice them in half lengthwise. Then use a basting brush to coat them with olive oil, and add spices, herbs, or garlic to taste.

Are Leeks Good For You?

Yes, leeks are full of vitamins, minerals, and antioxidants and low in calories. Because they’re eaten cooked more often than not, you will have to watch out for what you dress your leeks with.

If you add copious amounts of butter, oil, or cream sauce, while it may make your leeks unimaginably delicious, it may counteract some of the health benefits by adding a lot of fat and potentially salt to your meal.

On their own, however, leeks are generally considered one of the healthiest foods you can eat.

Their nutritional content has been shown to improve digestion and help balance hormones. They help your metabolism function correctly and protecting against heart disease.

They’re also thought to boost your immune system, protecting your brain, and helping to ward off infections.

Up Next: The Difference Between Green Onions And Chives

Can You Make Smoothies In A Food Processor?

Can You Put Hot Coffee In The Fridge?