Home Cooking Tips Should You Always Put Water In A Crockpot?
Cooking TipsFoodsguy

Should You Always Put Water In A Crockpot? 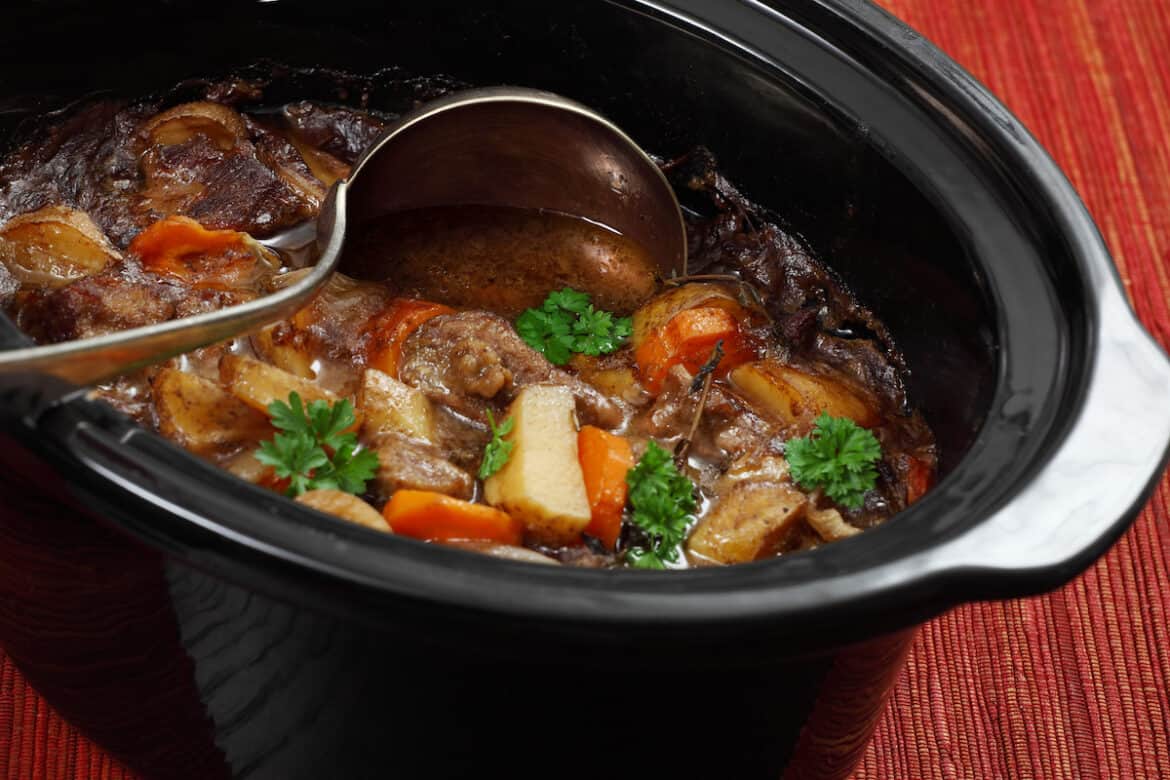 Cooking with a crockpot makes mealtime so much easier. Let’s face it, very few of us want to come home from a long day at work and have to slave over the stove to make dinner.

Using a crockpot lets you dump your ingredients in and cooks the meal for you so you don’t have to worry about it!

On the same note, cooking with a crockpot can sometimes be a challenge. It seems like no two crockpots cook exactly the same, and you have to get just the right ratio of moisture and ingredients to prevent burning or a mushy mess.

Should you always put water in a crockpot? You should not always add water to your crockpot. In fact, moisture evaporates less with crockpots than with other cooking methods. Adding more water than your recipe calls for can make your meal soggy or even too tough.

In this guide, we will walk you through when you should and shouldn’t use water in a crockpot.

We have some tips as to how to determine when you should use water and how to know when you don’t need water after all. It’s also possible to put too much water, so we will share some knowledge on that topic as well.

A Complete Guide to Water in Your Crockpot

It’s a common misconception that water is an absolute must when you are filling up the crockpot. It does make sense to think that water might be needed, but the truth is, there are many times you can actually skip the water.

Here’s another misconception. Some people are under the impression that you have to put water in the base of your crockpot.

While there may be some old styles of crockpots that are made this way, do not do this unless you have a specialty type of crockpot that requires it!

This is very important. It could actually be a safety issue or ruin your crockpot if you put water in the exterior base.

If you are going to use water, it should only be placed in the inner cooking pot that has a lid with it.

We will cover more about the circumstances that let you know when to put water in the crockpot and when you might not need it, but we wanted to touch on these basics first.

How Much Water Do You Put in a Crockpot?

Even when your crockpot recipe needs water, you must be very careful about how much water you put in it. If you put too much water, your meal could be ruined. The same could happen if you don’t put in enough water.

Sounds difficult, right? Don’t let any of this worry you! We know it seems complicated, but it really isn’t so hard once you know what to look for.

Follow recipes closely when they make recommendations, as you need the right ratio of moisture and ingredients. You want to avoid your food being dry and you want to avoid it becoming soupy when it isn’t soup.

Sometimes, the moisture needed comes from other ingredients or even the meat that you put in the crockpot, so you won’t need as much water in these cases.

If you’re following a recipe, we recommend sticking pretty close to it. Chances are the recipe has been tried and tested to determine just the right amount of water or other liquids to use in order to perfect the recipe.

There is not a set measurement to provide here. We cannot say that you should always put 2 cups of water (or some other number) in every crockpot recipe that you make.

It simply doesn’t work like that. You can make just about anything in the crockpot and it really boils down to what other ingredients are also used and how much moisture comes from all of it.

The truth of the matter is that unless you are making a soup or a stew, you probably don’t need extra liquid. The exception to this rule might be if you are cooking meat by itself with no other liquid ingredients.

Adding some water will help to keep your meat from drying out in this type of situation.

If you just add liquid because you think a crockpot requires liquid, you might be disappointed. You see, a crockpot actually evaporates far less moisture than your oven or stovetop.

Your crockpot recipe might actually end up with extra moisture even without adding water.

Try to understand the ingredients you are working with and whether or not those ingredients could produce moisture during the cooking process.

Meat and veggies tend to have quite a bit of moisture that draws out when they are cooking, so if your recipe contains these, you probably don’t need additional water – apart from soups and stews.

Are you ready for the secret? When you cook with the crockpot, you might actually be able to use less water than with some other cooking methods.

Rather than adding extra liquid, try working with about the same amount of liquid, or less, as you would if you made the dish outside of the crockpot and let the ingredients provide the moisture for you.

Can You Put Too Much Water in a Crockpot?

As a rule of thumb, you should rely on your ingredients to provide some natural water.

Things like poultry, vegetables, broths, sauces, and other meats and ingredients will have their own natural moisture, and adding water could have a negative impact.

We have it a little bit backward when we think that we must add water when we’re cooking in the crockpot. While there are certainly some dishes that will need water, most of the time you should need very little water to make your dish.

It’s almost ingrained into our brains that crockpots require extra water to cook sufficiently, but this isn’t always the case. Some of it really depends on the recipe and whether that recipe would normally require water.

This is significantly longer than if you cooked the same exact dish using the stovetop or the oven. But it saves you the time and hassle of doing that when you have a busy day.

While some crockpots have a small steam release, this releases a very minimal amount of steam throughout the day, which means the majority of the liquid stays right there in the crockpot.

There will be times using the crockpot when you don’t need to add any water at all and other times that you might need to add just a small amount of water. In the case of the crockpot, less water is typically the best practice.

That being said, you will find recommendations for ingredients with moisture and the addition of water to vary across the board.

This is because most of these recipes come from personal experience and not all of our experiences will be the same.

Remember that while crockpots all work in the same general manner, they are not all the same. Some cook hotter than others do and they are all designed uniquely from style to style and brand to brand.

Did you know that if you add too much water or liquid to your crockpot, it might actually make your meat tougher than if you had just let it be?

So, here is the general rule to follow: try cooking your recipes with equal water or slightly less water than if you were to cook the same recipe using the stovetop or the oven.

It may take some experimentation to get your ratios right, but this is a good place to start.

We hope that you have found this guide to understanding the proper use of water in a crockpot to be a helpful resource. Remember that less is more, and you may not even need to add water at all.

Take a look at the following question and answer section for some additional information.

How Full Do You Have to Fill a Crockpot?

It’s recommended that you fill your crockpot to at least half full when you are cooking. It doesn’t necessarily have to be liquid, but if the crockpot isn’t full enough, ingredients tend to end up overcooked.

Are 4 Hours on High the Same as 8 Hours on Low?

High and low settings on a crockpot ultimately determine the time that it takes to start simmering the liquid in the ingredients. High means the crockpot is cooking at higher temperatures and low is lower temperatures.

It’s not necessarily equal, but a recipe that calls for 4 hours on high might actually be able to cook up to 10 hours on low.

Up Next: The 7 Best Triple Slow Cookers

Cast Iron Sticking After Seasoning – How To...

How To Cook Alexia Sweet Potato Fries In...

How To Reheat Samosas – The Best Way