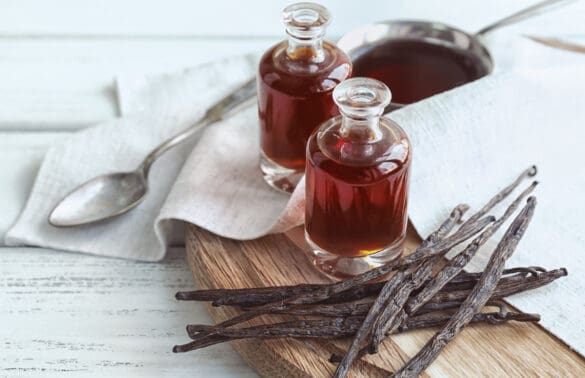 Though they are often mistaken for being the same thing, vanilla essence and vanilla extract actually have significant differences that affect the ways in which they can be used, their nutritional value, and the flavor that they create. These two products are made in very distinct ways, and one is markedly healthier than the other.

Though they sound quite similar, vanilla essence and vanilla extract are significantly different products.

While vanilla essence is a cheaper, synthetically produced product, vanilla extract is only produced from natural ingredients.

How Vanilla Essence and Vanilla Extract Are Produced

Vanilla essence is a synthetic, chemically produced substance that, though imitates vanilla, is not made of real vanilla.

On the other hand, vanilla extract is a natural product that is created by soaking vanilla pods in a solution of ethyl alcohol and water.

Vanilla extract gets its strong flavor from vanillin, a molecule that is found in vanilla beans.

The Difference in Ingredients

As mentioned, the big difference between vanilla essence and vanilla extract lies in their ingredients and how they are produced.

The ingredients that make vanilla essence often include all or some of the following:

Most vanilla extract is free of all artificial products, as you can see by its ingredients.

Though vanilla extract does contain some sugar, there is no need to worry. The amount of sugar that vanilla extract contains is insignificant, and its pure and natural ingredients are the more important component to focus on.

While both vanilla essence and vanilla extract are used primarily for baking purposes, their difference in quality and price lends to distinct uses.

Read on to find how exactly you should cook with vanilla essence and vanilla extract.

How To Use Vanilla Essence

Because vanilla essence is a cheaper product, it is convenient for those who are baking in bulk or need to use large quantities of it.

However, due to the fact that it is made from artificial ingredients, it has a less natural flavor, so you want to avoid using it in recipes in which vanilla is one of the key ingredients.

If you’re baking a large cake or a big batch of cookies that call for a dash of vanilla, you probably won’t be able to note the inferior flavor of vanilla essence.

If you don’t have vanilla and want to make up for the lack of flavor, read this article: The Best Substitute For Vanilla Extract in Cookies

Vanilla essence is also an affordable choice for bakers or chefs who have to feed very large amounts of people.

When baking with vanilla essence, add it in when you add the rest of the wet ingredients.

You probably won’t want to use it in cold desserts, such as a custard or a pudding, considering that vanilla extract is of superior quality and flavor.

How To Use Vanilla Extract

Vanilla extract, on the other hand, is a high-quality ingredient that you can use in a variety of recipes, baking and beyond.

While it can be used to add flavor to cakes, cookies, and pastries, it is also a great product to use when vanilla needs to be the star of the show.

If you’re making a custard or homemade vanilla pudding, add it in when your dish is done cooking and has already been taken off of the heat. The same goes for frostings or icings.

If you’re baking with it, add it in at the same time that you would add vanilla essence, when you are mixing your wet ingredients.

When cooking with vanilla extract, don’t be afraid to let it shine!

The Difference in Price: Affordable and Mostly Affordable

As previously mentioned, vanilla essence tends to be significantly cheaper than vanilla extract due to the fact that vanilla extract is made from purer, higher quality ingredients.

We recommend shelling out the extra few dollars that vanilla extract will cost you because though comparatively more expensive, it’s still a relatively affordable product.

However, a little goes a long way when using vanilla extract, so it’s sure to last you a long time.

If you can’t seem to get your hands on vanilla essence or vanilla extract, there are a few alternatives that you can use in their place.

Vanilla paste is most appropriate when preparing cold products, such as ice cream, frosting, or icing.

However, you’ll want to make sure that it is properly incorporated into the rest of your ingredients, as you are using something with a much thicker consistency than vanilla essence or vanilla extract.

If you’re looking for another creative vanilla project, consider placing some halved vanilla beans in a jar of sugar. Close the jar and let it sit for a few weeks in a cool dark place.

The sugar will absorb the vanilla aromas, and you’ll be able to use it in a plethora of baking recipes! Instead of adding regular sugar into your cookies and cupcakes, use this vanilla-infused sugar and omit any vanilla essence or vanilla extract that the recipe calls for.

If you enjoy vanilla lattes or vanilla coffee creamer, you could also combine this vanilla-infused sugar with milk or Half-and-Half to spruce up your cup of coffee.

This vanilla sugar will last a long time, making it an incredibly affordable alternative to vanilla extract.

For even more ideas to sweeten up your coffee, read this: The Best Coffee Sweeteners

Thanks for reading our carefully researched article about the differences between vanilla essence and vanilla extract! Now that you know the main differences, we thought we’d do you a favor and answer the most frequently asked questions. Enjoy!

Which is healthier, vanilla essence or vanilla extract?

As you can see, vanilla extract is clearly both a higher-quality and healthier choice.

Vanilla essence contains a plethora of artificial and chemical ingredients (sometimes even petroleum), and though it won’t make you sick, a natural product like vanilla extract is the much healthier choice.

Can you substitute vanilla essence for vanilla extract and vice versa?

Though vanilla essence and vanilla extract are very similar products, there are a few things that you must take into consideration when replacing one for the other.

Can you make vanilla essence at home?

Because vanilla essence is a chemically processed item, you cannot (and probably wouldn’t want to) make it at home.

That being said, you can make homemade vanilla extract.

All you need is a glass bottle or jar, vanilla beans, and clear liquor (preferably vodka).

Up Next: Does Vanilla Extract Go Bad? – How To Tell

All this chatter and repetition and I still didn’t find the answer to my question. How much Vanilla Essence is equivalent to 1 gram of Vanilla Extract?