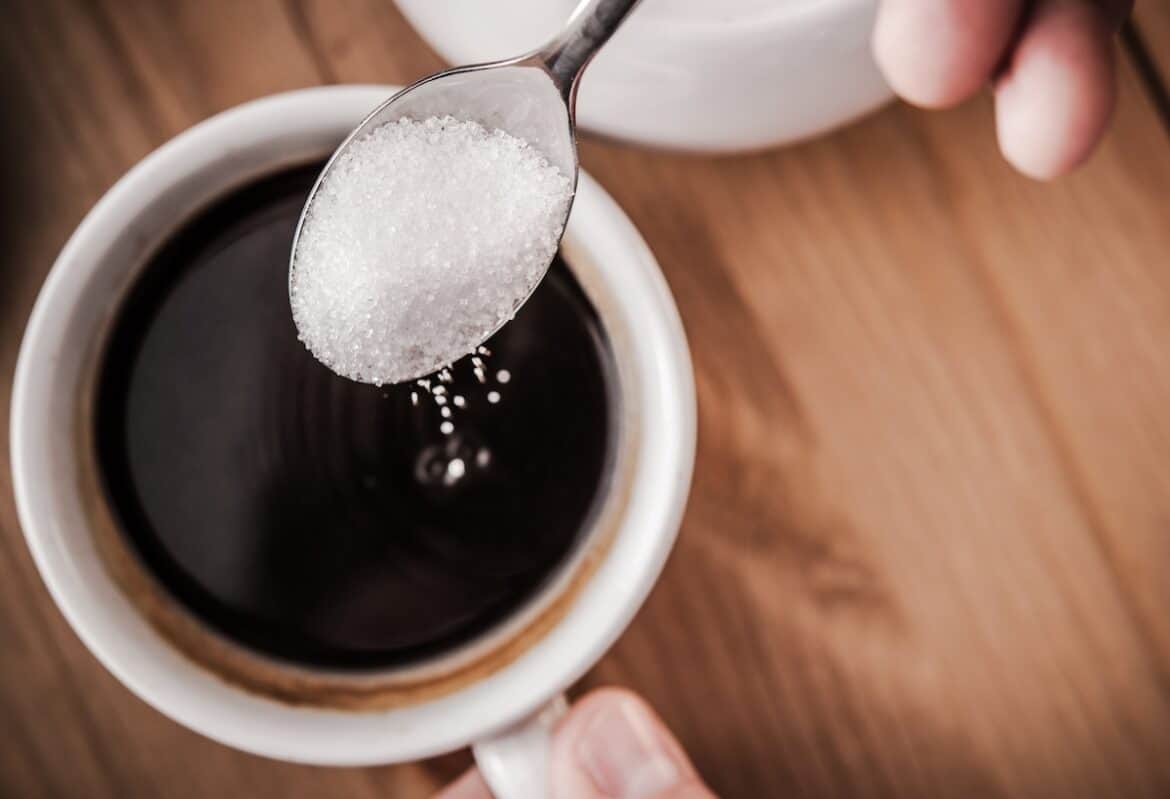 Coffee is one of the most popular beverages around the world and there are an almost infinite number of ways you can enjoy it, from simple and straight-forward black to triple-shots of espresso with a non-fat milk alternative, extra foam, super hot and added whip and a caramel design on top.

The most common additives, however, are cream and sugar. What if you’re trying to avoid refined sugar? The 5 best coffee sweeteners, outside the world of table sugar, are stevia, honey, agave nectar, maple syrup, and molasses.

Each of these coffee sweeteners has its own unique benefits, which you’ll learn all about as you read through the rest of this article.

Sugar is a common enemy of health and many people are trying their best to avoid at least the refined version of this commodity.

While too much sugar of any kind isn’t necessarily good for your health, there are refined sugar alternatives that bring a lot more to the table than just sweetness.

Fruit, for example, is quite high in natural sugar and provides a reasonable way to add sweetness to your day at the same time as adding vitamins, minerals, and fiber.

Fruit doesn’t taste great in coffee, however, unless it’s in the form of raspberry syrup.

Other natural sugars include honey, agave, maple syrup, and molasses, which do go well with coffee.

The healthiest artificial sweetener according to dietitians is Stevia. It has no calories and it’s plant-based, rather than chemical-based.

Each of the last-mentioned sugar alternatives made our list of best coffee sweeteners.

Drinking coffee black is a great choice. For me, it means that I can drink more of it without feeling guilty about calories or too much sugar, but it’s not for everyone.

If you drink a casual one or two cups of java a day, there is nothing wrong with adding a little extra flavor. Let’s dive in and learn how to sweeten coffee without sugar.

Stevia is our top choice for a coffee sweetener for several reasons. It’s a sugar substitute that is not artificial, for one.

It’s made from plants and comes with the benefits of plant products, such as added antioxidants and even anti-microbial properties. It looks and acts just like sugar, except for that it’s about 300 times as sweet, so a tiny amount goes a long, long way.

Stevia also has exactly 0 calories and a nearly unnoticeable effect on your insulin response. This makes it the best choice for weight loss and diabetics.

Packets of stevia are particularly useful when you’re a new convert to the product.

Because it’s so much sweeter than sugar, having it pre-measured out for you in packets that are equal to the sweetness of 2 teaspoons of sugar will help prevent you from making sickly sweet coffee.

In the long run, however, it’s a lot of extra packaging, so the liquid version is a better long-term solution.

Biggest Drawbacks: The most common complaint about stevia is the bitter aftertaste, which is not noticed much in this particular brand. For some, it has been known to cause bloating or gas.

Honey is not just sweet like sugar, it has a noticeably distinct flavor. Is honey good in coffee? Yes, though it may take some getting used to.

Honey is a very popular sweetener for tea and is delicious in coffee.

Depending on your reasons for choosing honey over white sugar it’s important to note that honey actually has more calories than sugar does.

It also has more antioxidants, but it’s still not a great choice for anyone avoiding sugar for reasons of weight loss or insulin management.

It comes in various flavors and qualities, depending on the types of flowers the honey is created from.

This honey is our favorite because it’s pure, raw, and unfiltered. This means you get the most benefits from the honey in its natural form!

Manuka honey is thought to be one of the healthiest products on the planet and it’s quite exclusive.

The manuka flower is native to New Zealand and only blooms for a maximum of 6 weeks per year.

Biggest Drawbacks: It’s expensive. Anything this exclusive will charge a premium price and for good reason. It’s a splurge, but it’s worth it.

Agave nectar or syrup comes from a cactus and, as such, is completely natural. It’s also very useful for diabetics and others with insulin sensitivity because it registers low on the glycemic index.

It’s usually classified as sweeter than sugar, but has a bit more flavor, somewhere between plain white sugar and honey. It’s a thin liquid that works well in coffee as it combines without a trace.

One of the best things about agave is that is cuts through bitterness, rather than adding to it.

Coffee itself is a bitter drink and some artificial sweeteners leave a bitter aftertaste, making your coffee less appealing. Agave doesn’t have that problem and it balances out coffee with a unique grace.

Madhava was originally a honey manufacturer, but ultimately their passion lies in providing top quality organic products, which is obvious in their Amber Agave.

They produce it in hopes that people around the world will start using less low-quality sweeteners that don’t do health any favors – refined sugar and corn syrup, for example.

Biggest Drawbacks: Agave nectar is a sweetener based in fructose, similar to that of high-fructose corn syrup. While you only need half as much, it’s still not a product you want to consume in large quantities.

Maple syrup is another nutritious and natural sugar alternative that tastes great in coffee.

Once again, it might take some getting used to because it’s quite obviously not plain sugar, but if you like syrup on your pancakes, you’ll love it in your coffee.

If you find a bottle of high quality, pure maple syrup, it won’t just sweeten your coffee, it will also add nutrition in the form.

It’s not as highly regarded as honey, but it has many similar health benefits.

Maple syrup can vary so widely in quality that it’s a product that is actually rated.

Before you reach for a high priced bottle assuming the price reflects the quality, look first for a few important factors: where it’s made, the ingredients, and the coveted “Grade A” stamp of approval.

The majority of pure maple syrup, not “maple-flavored” syrup, is made in Vermont, where anything less than an A would be a disgrace.

Biggest Drawbacks: Maple syrup is delicious and a healthier choice than sugar, but it still has a high glycemic index and plenty of calories. It’s called liquid gold for a reason though, and because it tastes so good, you may find yourself using more of it than is healthy. Moderation is key.

Molasses is a product of sugar production that is a more natural sweetener than table sugar, but is less popular because of it’s deep, earthy flavor.

It’s more commonly used in recipes considered traditional or old-fashioned, like gingerbread, but if you give your palette time to adjust to the interesting flavor, you may find it very enjoyable.

The lighter the molasses, the sweeter the flavor. The most common molasses on the market, however, is blackstrap, which is the darkest in color and most robust in flavor.

Biggest Drawbacks: Molasses isn’t nearly as sweet as some of the other sugar-alternatives, and the blackstrap variety that is most convenient to purchase is actually a touch bitter. It’s an acquired taste, but can be very addicting.

Coffee without sugar: What are the calories?

Black coffee is so low-calorie is usually considered no-calorie, and suitable for drinking while fasting. Technically speaking, 1 cup has approximately 2 calories.

The moment you add any other ingredient, the calorie count is likely to change.

How does stevia taste?

The most distinguishing flavor of stevia is sweetness. It’s so sweet that it’s almost overpowering.

Once your tastebuds recover from the shock, stevia sometimes leaves a slightly bitter, almost licorice-flavored aftertaste.

How to sweeten coffee on Keto?

Heavy cream is probably the most popular way to sweeten coffee if you’re following the Keto diet.

Dairy naturally adds sweetness but, more than anything, it cuts the bitterness of the coffee, making the taste more palatable for those who don’t like to drink coffee black.

It also adds a healthy dose of fat to your diet, which is always welcome in the world of Keto.

The Absolute Best Kosher Salt Of 2022

Pecan Vs Walnut – What’s The Difference?