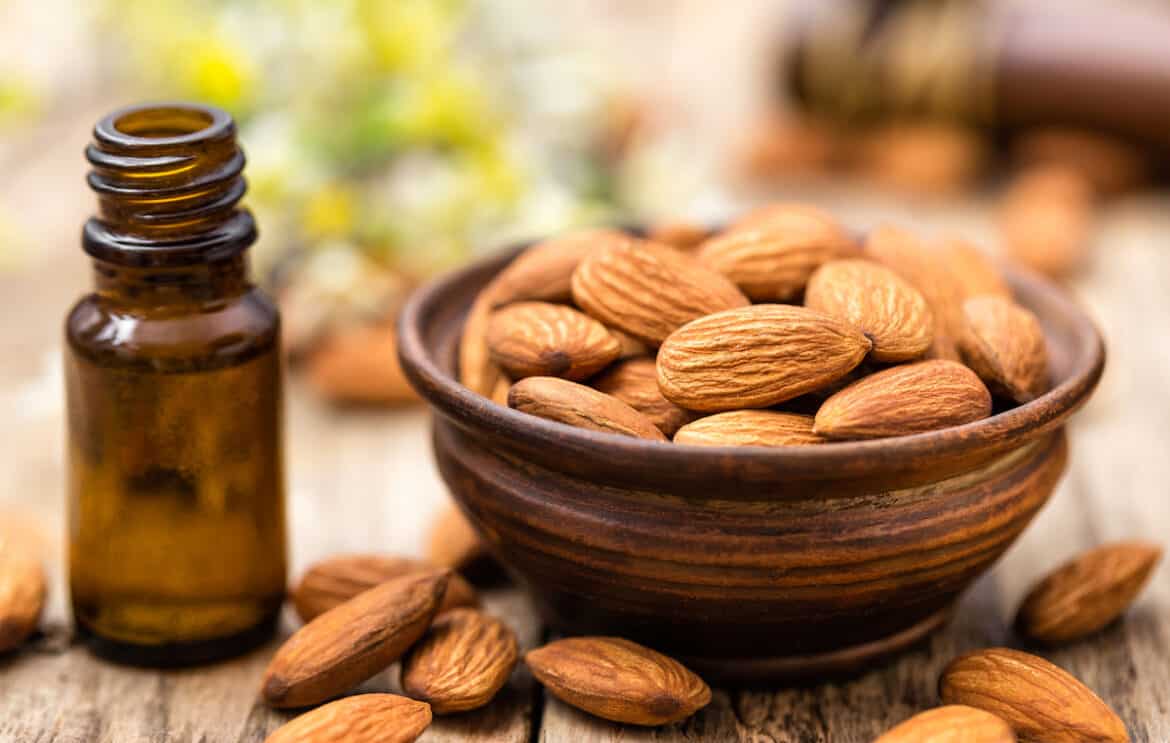 Though people often assume that almond extract and almond flavoring are the same thing, they most certainly are not. Though both serve the same purpose (to add almond flavor to a recipe), they have quite a few differences when it comes to production and ingredients.

While almond extract is a natural product made from real ingredients, almond flavoring is a synthetic almond flavor imitation that is chemically produced.

So what’s the difference? Though both are made from natural ingredients, natural almond extract is actually made from cassia bark.

The almond extract that we refer to in this article is pure almond extract, which is made from either the almonds themselves or stone fruit (drupe) pits.

The almond oil contains a compound called benzaldehyde, which is where almond extract gets its flavor. Sometimes the benzaldehyde is extracted from the pits of drupes, such as peaches or apricots, as these stone fruits are close relatives of the almond.

To make pure almond extract, almonds (or the pits of other drupes) are cold-pressed and combined with alcohol. Water is then added to dilute the solution.

On the other hand, almond flavoring, otherwise known as imitation almond extract, gets its almond flavor from synthetic benzaldehyde, which is then combined with water and alcohol to dilute the solution.

When it comes to nutritional considerations, there isn’t too much of a difference between almond extract and almond flavoring.

Both have no practically no calories, no fat, and no protein.

1 teaspoon of almond extract or almond flavoring contains a mere 4 carbohydrates, which is less than 5% of the daily recommended value.

If you’re looking for some almondy goodness with more nutrition, we recommend trying almond butter. You can find the nutritional chart for almond butter by clicking here.

Almond extract usually costs between $1 and $3.50 per ounce, meaning that a 4-ounce bottle would cost anywhere between $4 and $14.

However, these prices shouldn’t frighten you, because the small amounts of almond extract that are used in recipes mean that even a tiny bottle will last a long time.

On the other hand, almond flavoring is the cheaper alternative of the two, as it usually costs between $0.50 and $2 per ounce.

Ways to Use Almond Extract

Almond extract and almond flavoring, though they do differ in ingredients and the manner in which they are produced, can usually be used on similar occasions.

However, if you are making a recipe in which almond is one of the most important ingredients, it is advisable to use almond extract, as it will create a more pure and natural flavor.

Almond extract and almond flavoring are most commonly used for baking purposes.

They can be substituted for vanilla extract in baked goods such as cakes, cookies, cupcakes, and more. They are also delicious when whipped into icing or homemade whipped cream.

It pairs especially well with desserts that contain other drupes, or stone fruits, such as cherries, peaches, apricots, and plums.

Almond extract would be an excellent addition to any cherry pie, peach cobbler, apricot tart, or plum crumble.

It can even be used in savory recipes that include almonds, such as saffron rice or almond crusted chicken tenders.

Note: Almond flavoring cannot be made at home because it is synthetically produced…unless you are a chemist with a laboratory!

How Much Almond Extract To Use

Almond extract is extremely potent, so you want to use it sparingly.

The most that you will likely use in a recipe is 1 teaspoon, as using much more would not result in a stronger almond flavor but rather a bitter taste.

How To Substitute For Almond Extract

Perhaps you are allergic to almonds or simply don’t like the taste.

If you don’t want to use almond extract or almond flavoring, you can use vanilla extract or essence in its place, though it will certainly result in a distinct flavor.

If you’re looking for a unique and distinct replacement for almond extract or almond flavoring, there are some interesting products that you should consider.

Depending on the flavor profile of your recipe, you could try out chocolate extract, banana flavoring, coffee flavoring, or orange flavoring.

Though these alternatives will result in extremely distinct flavors, they can serve as a substitute when a recipe calls for almond extract or almond flavoring.

Up Next: Vanilla Extract Vs Vanilla Essence – The Differences

Thanks for reading through this comprehensive guide to the difference between almond extract and almond flavoring. We hope you enjoy the answers to our most frequently asked questions too!

Almond Extract Benefits – Are There Any?

When it comes to health considerations, the most important thing to take into account is the benzaldehyde, which is naturally occurring in almond extract but synthetically produced in almond flavoring.

Naturally occurring benzaldehyde, which is extracted from almonds or the pits of stone fruit, contains cyanide, though it is found in such trace amounts in the almond extract that you’ll be safe unless you consume abnormally large amounts of it.

Almond flavoring, on the other hand, does not contain cyanide, and though it is synthetically produced in a laboratory, it doesn’t present any health considerations that are cause of worry.

In the end, both almond extract and almond flavoring are safe ingredients with a low nutritional value.

If you or a family member has a tree nut allergy, which includes almonds, almond extract is likely unsafe to consume.

Though it depends specifically on how the almond extract is produced (whether it is made using almonds or the pit of another drupe) and the severity of the allergy, it is recommended that people with tree nut allergies steer clear of almond extract.

While almond extract can be a risk for people with tree nut allergies, almond flavoring should be safe.

Because it doesn’t actually contain any almonds, just synthetic flavoring, almond flavoring is usually fine for those who suffer from tree nut allergies, though this depends on the severity and personal condition of each individual.

The safest bet is to consult with your allergist or physician before consuming almond extract or almond flavoring.