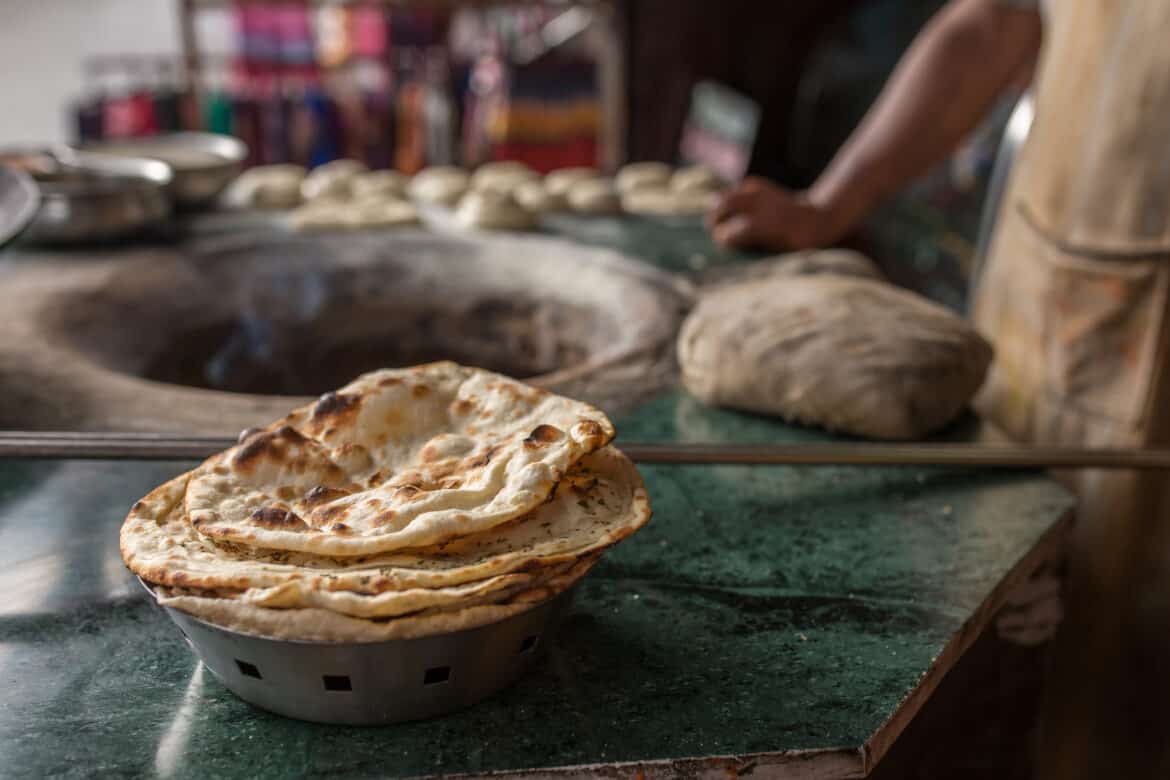 Tandoori roti and naan are two types of flatbreads popular in Indian and Pakistani cuisines.

Served with an accompaniment of numerous savory dishes, they may look the same at first glance, but there are certain qualities that set them apart.

So, what is the difference between tandoori roti and naan? Tandoori roti is unleavened bread made using whole wheat flour in a traditional pot-shaped clay oven (also known as tandoor), whereas naan is a yeast-leavened flatbread that contains fillings and is much fancier.

Read on to find out more about tandoori roti and naan, and how they compare in terms of their ingredients, preparation method, taste, and texture:

What Is Tandoori Roti?

Tandoori roti is a flatbread popular in Southeast Asia, particularly India and Pakistan, that is prepared using a traditional pot-shaped clay oven called a tandoor.

Tandoori roti gets its name from the oven (tandoor) used for preparing it and is different from other types of roti made using a concave or flat skillet known as a tawa.

The main ingredient that goes into making tandoori roti is wheat flour. The cooking method, however, may differ as some people may add clarified butter (ghee), butter, sugar, or yogurt to the mix.

Naan is a leavened flatbread also popular in Indian and Pakistani cuisine and traditionally prepared in a tandoor.

It mainly serves as a side for a variety of dishes and comes in several varieties, most of which originate from South Asia. The word naan doesn’t hold much significance in South Asian cuisine as it is a generic name for bread over there.

Both tandoori roti and naan are flatbreads traditionally prepared in a tandoor oven. They are served alongside a variety of dishes such as BBQ items, curry, soups, and vegetables.

Let’s look at how they compare in terms of their ingredients, appearance, cooking style, varieties, texture, and more.

Tandoori roti is unleavened bread made traditionally with whole wheat flour. It doesn’t have any fillings and is usually enjoyed with curries, soups, and veggies. It may oftentimes even serve as a wrap for meat dishes.

Naan, on the other hand, is a yeast-leavened flatbread made using refined all-purpose flour. It is much sweeter and fancier than tandoori roti and can contain fillings such as minced meat, veggies, cheese, raisins, butter, and coconut.

At first glance, tandoori roti and naan may look very similar but they are two different types of flatbreads. Their level of thickness depends on how they are prepared and the expertise of the person making them.

Tandoori roti can never be as thick as naan due to the various ingredients and fillings present in the latter, which give naan a denser texture and thicker mouthfeel.

When it comes to texture, tandoori roti has a drier, coarser, and lighter texture that requires more chewing.

Naan, on the other hand, has a softer and denser texture mainly because of the ingredients used and the type of flour and yeast added to it.

Tandoori roti is one of the many variants of plain roti, which is prepared on a tandoor. Other variations of roti include:

Naan, on the other hand, has several subcategories — some of the most popular ones include:

Tandoori roti gets its name from the way it is prepared in a cylindrical clay or metal oven called a tandoor. It is usually powered by a wood fire or charcoal and gives the tandoori roti its distinctive taste and appearance.

While it is possible to make tandoori roti on a flat skillet or tawa when there’s no tandoor available, the traditional way to make it is in a tandoor only.

Naan is also baked inside a tandoor oven and both tandoori roti and naan are stuck to the inside of the oven on the sides, where the heat creates air pockets and cooks them to perfection.

While the cooking style for both tandoori roti and naan is more or less the same, the preparation method, time, and ingredients are all very different.

Tandoori roti is generally a very no-frills-attached flatbread that is easy to prepare and barely takes any time because of the limited ingredients involved, especially if you are an experienced baker.

Naan, however, takes much longer due to the mixing of the ingredients and the separate preparations involved for the various fillings used.

Tandoori roti is healthier than naan as it contains fewer calories and no cholesterol, saturated fat, or trans fats. When prepared with whole wheat flour, it is also rich in protein, iron, dietary fiber, minerals, and potassium.

Although naan offers the same nutritional benefits, it contains saturated fats and cholesterol due to the use of animal fat in its preparation, which may lead to health conditions if consumed in excess.

Its nutritional benefits also depend heavily on the type of naan and the fillings used inside.

For someone new to Indian and Pakistani culture and cuisine, getting confused between tandoori roti and naan is expected. After all, they are both types of flatbreads with more or less the same uses.

They are, however, two very different types of staple foods that differ in terms of their ingredients, taste, texture, nutritional value, and much more:

How To Make Tandoori Roti At Home

Tandoori roti is made using either whole wheat flour or a mixture of wheat flour and maida (all-purpose flour) and is traditionally cooked in a tandoor oven at a certain temperature.

While you will easily find tandoors at several restaurants serving Indian and Pakistani cuisine, you will rarely see one in a house, which leads to our big question — can you make tandoori roti at home?

Yes, you can. The trick to cooking tandoori roti is cooking them at a specific temperature so that they are cooked inside and out. You can easily make them on a tawa or an electric tandoor if you have one.

Here are the ingredients you’ll need to make tandoori roti at home:

Here are a few helpful tips to make tandoori rotis at home — without a tandoor:

How To Make Naan At Home

Since traditionally, naan is also made in a tandoor (seldom seen in a residential property), you will have to use a skillet or tawa when making it at home.

Similar to how you would cook a tandoori roti, you have to be mindful of the temperature so that the naan is cooked evenly.

Here’s how you can make naan at home:

If you wish to make stuffed naan, you can add the stuffing while you roll it out.

Use a spoon to add the filling to the rolled-out dough and use your fingers to pinch the sides of the dough towards the center to seal it. Use a rolling pin to roll out the dough.

You can also sprinkle it with sesame seeds or poppy seeds and use your rolling pin — apply a bit of pressure to make them stick to the dough.

Once the naan is cooked, you may brush it with warm butter (or ghee) and serve it immediately.

Now that you know all about tandoori roti and naan and how they compare with one another, here are a few additional questions we thought you might have.

What is the difference between chapati and roti?

Chapati is a type of roti made using a few basic ingredients such as flour, water, and salt. Roti, on the other hand, can refer to any leavened or unleavened flatbread.

Are tandoori roti and naan vegan?

Tandoori roti may or may not be vegan, depending on how it is prepared. You need to make sure it isn’t topped with any butter or ghee, and that no yogurt is mixed with the dough.

Naan, on the other hand, is not vegan. Since most naan contains yogurt in the dough, which is an animal by-product, it cannot be considered vegan.

In the case of stuffed naan, if the filling is made with meat, cheese, or other similar ingredients, it will definitely not be safe for vegans.

No, tandoori roti is not gluten-free as one of its main ingredients is wheat flour. You can, however, use a gluten-free alternative to make it, such as almond flour.

Coulis Vs Compote — What’s The Difference?

Is Lard Vegan? (Plus What To Use Instead)