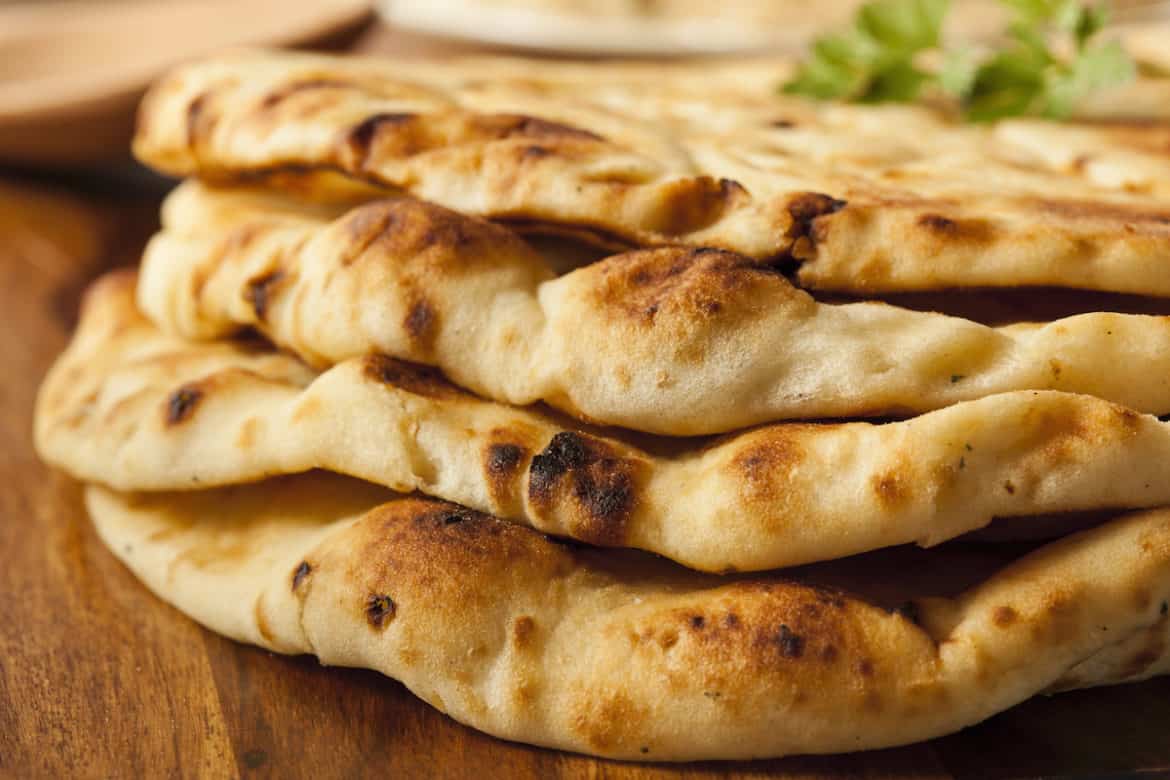 Naan bread is a yeast-leavened Indian bread, traditionally baked in a tandoor, a clay oven, and it is absolutely delicious. Naan bread is readily available at many supermarkets, Indian restaurants and can be easily made at home.

You might have some naan bread sitting in your fridge, waiting to be devoured with a curry or eaten alone as a snack.

Read on to learn more about this amazing bread and how to reheat it!

Naan bread is simple enough to reheat at home, whether from frozen or using the naan left from dinner the night before.

Depending on the appliances you have at home and how you like to serve your naan bread, here are the three best ways to reheat naan bread and bring it back to its original delicious texture and taste.

How To Reheat Naan In The Microwave

Microwaving naan bread is one of the quickest ways to reheat it. Depending on your microwave strength, you will need to heat up the naan bread for 30 to 90 seconds.

Cooking for longer than this will only lessen the moisture content and cook the starch, which will cause the naan bread to be rubbery.

You will be able to tell if your naan bread is ready if it is warm to the touch and can be gently folded.

If you are warming up more than one naan, follow the below timing guideline for reheating naan in the microwave:

How To Reheat Naan In A Frying Pan

Reheating naan in a skillet is a good option for naan that is not frozen. You will need to heat the skillet up to high heat before placing the naan in the skillet. If you don’t have a good skillet, you really need to try out this one that I use!

How To Reheat Naan In The Oven

To heat non-frozen naan up in an oven, you will need to give it an extra bit of moisture to prevent it from drying out.

If you’re looking for a new baking sheet, these are my favorite ones that you can get on Amazon.

How To Reheat Naan In An Air Fryer

To reheat naan in an air fryer, follow these instructions:

You will have perfectly toasty naan in less than 5 minutes with this method.

Adding Flavor To Your Naan Bread

It is possible that your naan bread would have lost some of its flavors while it was frozen or sitting in the fridge, and having flavorless naan bread just isn’t worth it.

Luckily, you are able to add some extra flavor to your naan bread when warming it up in a skillet or in the oven.

You can add almost any spice, ingredient or topping you want to your naan bread, but here are the most popular and best-suited flavor options to really take your naan bread to the next level:

I just reach into my favorite spice rack to try out new flavors!

You have the freedom to mix and match any ingredients and toppings you want when reheating your naan bread, to create the perfect snack or accompaniment to a main dish.

How To Store Naan Bread

Proper storage of naan bread is the best way to ensure it keeps well and holds its flavor and texture perfectly. For store-bought naan bread or for naan bread made at home, here are the best two ways to properly store the naan bread:

The Different Types of Indian Bread

Mostly everyone is familiar with the deliciously tender and soft naan bread given as a side to curry take-outs, but there are some other wonderful Indian breads that are just as amazing as naan.

Why not try one of the below breads out and expand your culinary knowledge of Indian breads?

Chapati is unleavened bread that is made by slapping and stretching out dough between the palms of the hands, before being cooked on a tava, which is a disc-like frying pan.

Chapati goes so well with almost any gravied curry or stew. It has a mild nutty flavor and is an everyday bread in India.

Parotta is a layered flatbread from Kerala. Parotta is made with maida flour and contains a higher gluten content than its sister bread paratha. This results in the bread being silkier and doughier once cooked.

Parotta is traditionally served with breakfast or lunch with a dahl or lentil curry, but there are more modern ways of enjoying the bread, such as stuffed with onions and cheese, or even served sweet with Nutella and bananas.

Paratha is possibly the most common unleavened flatbread in India. It is a versatile bread, being flaky, chewy and dense. This texture is achieved by the dough being layered with ghee while folding.

The paratha bread is baked on a hot Tava and then fried in a skillet with oil. This results in a crisp flatbread that does not disintegrate when served with curries or stews.

Puri is an unleavened bread which is fried until golden and crispy.  The dough inflates once it hits the hot oil, creating a golden puff which is suited best served with chana masala or a korma.

Bhatura is a deep-fried bread that is golden and crispy. It is a leavened bread made from maida flour, ghee, yogurt, and yeast. It is popularly served with chana masala at breakfast time.

There are two different types of bhakri, one is prepared being cooked like a pancake on top of a hot tava, and the other is puffed up in oil and served with ghee.

It is a staple bread that is often eaten by farmers out in the field, accompanied by chutney and rice.

Being a simple, yet delicious bread, there are many different ways to serve naan. One way is to stuff the naan with different ingredients and spices.

There are so many options on how to serve naan, but the below are some famous stuffings for naan bread.

Paneer is an Indian cheese, and curried up can be served stuffed in naan, or even the cheese on its own.

This is naan bread stuffed with onions and potatoes. It is a vegetarian option and is just as delicious as any other meat variation.

This is a sweet variation, it is naan stuffed with nuts and raisins. It can be eaten as a dessert or as a snack during the day.

This is naan stuffed with ground mutton, lamb or goat. It can be served as a main meal, with many different spice and curry variations to be experienced.

Other than these traditional ways to stuff naan, there are more modern and western takes on naan bread, with the bread being used as a pizza base, or wrapped around a burger patty to mimic a burger.

There really are so many possibilities on how to serve naan, from the humble side to curry to a flatbread pizza, it depends how creative you can be!

Thankfully, reheating naan bread isn’t complicated, and there are ways to reheat the naan bread to ensure it keeps its crispy and soft texture, as well as its wonderful taste and moisture.

It is so handy to have some frozen naan stored away in the freezer, or some kept in an airtight container in the cupboard.

It is such a versatile bread and can be used to complete nearly any type of dinner, adding an authentic Indian taste to even the most mundane of meals.

The trick is knowing how to properly reheat the naan to keep it as delicious as can be!

Up Next: Naan Recipe Without Yogurt

How To Freeze Kolaches

How To Reheat Sticky Rice

How To Reheat Tteokbokki

How To Reheat Risotto – Everything You Need...

How Long Is Chinese Food Good For? (And...

White Stuff On Grapes – What Is It...

How Long Does Dragon Fruit Last? (And How...

How To Make Parsnips In An Air Fryer

Tripped across your blog while googling the best way to reheat naan bread. The skillet method is perfect – made my (homemade) Tikka Masala well rounded and ridiculously tasty. Thanks!