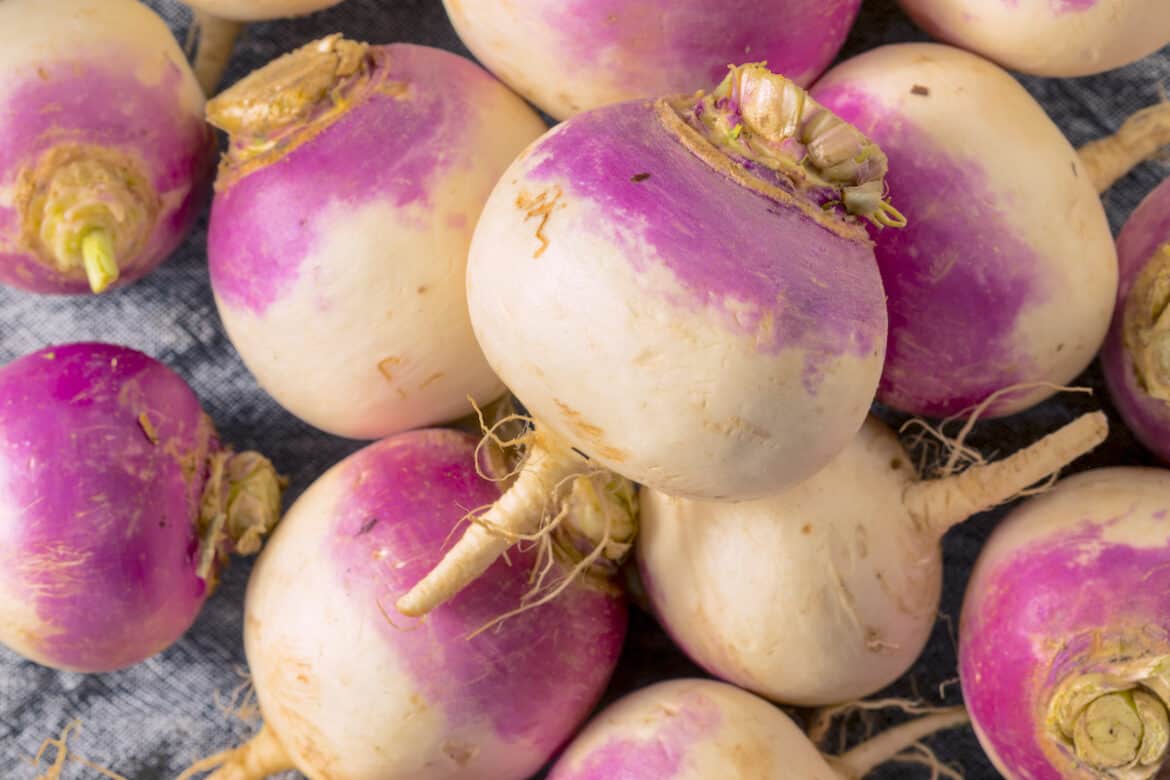 For some reason, many people avoid turnips, simply assuming they taste bad.

But this is far from the truth. Unlike some of their root vegetable relatives, turnips don’t have much of an earthy or bitter taste and they will probably surprise you with what a great addition they make to a meal.

What do turnips taste like? The young root vegetables are mild, with a delicate sweetness to them and just a hint of peppery spice. As they age, they do get a bit woodier, but many people enjoy the depth of flavor in a roasted or mashed recipe.

In this article we’ll go into detail on the flavor of turnips, comparing them to many more common vegetables that you’re probably familiar with.

We’ll also give you some tips for preparing turnips to bring out the best of this underrated root vegetable.

Turnips are very interesting root vegetables in that they taste slightly different to different people.

Most commonly, people find turnips to have a slight bite to them, which is not unusual as they are part of the same family as mustard greens and radishes.

This peppery taste is mingled with the flavor of cabbage which is again not surprising because turnips are cruciferous vegetables with plenty of sulfur-based compounds.

On the other side of the spectrum, others find turnips to be more of a cross between a potato and a carrot. They find the turnip to be more of a plain, semi-sweet flavor with a bit of a starchy texture and crunch.

When you eat the turnip will certainly influence the taste of this root vegetable. Turnips do tend to get more spicy and bitter as they age, so a young and tender turnip will be much milder and crispier.

The leaves of young turnips are mild, fresh, and just a little bit sweet.

They taste very similar to a young turnip, though more concentrated in flavor. The leaves get more bitter as they grow, and many find these spicier as well.

You can eat them raw, chopped up into a fresh green salad and they’ll add a unique peppery bite, not unlike arugula though not nearly as bitter or strongly flavored.

When cooked, they lose much of their bitterness. So if you have older leaves, sauteeing them in some olive oil, minced garlic, and adding a little bit of fresh ground salt is a winning combination.

If you’re trying to sneak more vegetables into your family’s favorite foods, adding turnips to mashed potatoes is a great place to start.

The white root vegetable will blend seamlessly into your potatoes and the flavors combine nicely, giving the resulting mash a sweeter flavor, but not shockingly different.

Do turnips taste like potatoes, though? Most people would say no.

If you taste-test these two vegetables one after the other, there is a significant difference in the flavor. The texture may be similar, though potatoes are starchier than turnips.

Turnips have a spicy undertone and a sweeter flavor than potatoes though much of the spice disappears when it’s cooked, leaving only a sweet, simple flavor that does have hints of potato.

You can substitute one for the other in recipes, however, as they cook nearly the same. Although they are certainly not the same vegetable, so the flavor of your meal will be different.

Turnips and rutabagas are from the same family, Brassica, and, as cruciferous root vegetables, they do have a similar taste.

In fact, rutabagas are thought to be an ancient hybrid of cabbage and turnip. In many parts of the world, rutabagas are even called Sweedish turnips or, simply, Swedes.

Turnips are generally harvested when they’re quite young, to avoid the woody, bitter flavor that develops as they age. Rutabagas, however, are allowed to grow much longer so they are rather large when they’re finally harvested.

Younger vegetables tend to be sweeter, and this is true for turnips, however rutabagas as a vegetable are naturally sweeter than turnips, even the young roots.

Turnips and radishes are both in the Brassica family, as well, and they have a similarly peppery note to them, though it’s much more pronounced in a standard red radish.

A daikon radish, however, is milder and has more in common with turnips, as far as taste goes, though their texture is quite different.

A turnip actually looks like a large, overgrown white radish. One thing turnips and radishes have in common is that their greens are often ignored or discarded, despite the fact that they’re incredibly nutritious and delicious.

Radish greens have quite a bit more heat than turnip greens do, but both tops taste like concentrated, green versions of their roots.

Can You Eat Raw Turnips?

Yes, raw turnips are a great addition to a salad, shredded into a slaw, or sliced thinly for some added crunch to your sandwiches, burgers, and even wraps.

If you’re planning on eating your turnips raw, shop for young turnips. Look for bulbs that are small and heavy for their size and don’t have cracked or wrinkly skin.

What is a Good Turnip Substitute?

In terms of flavor, the best substitute for turnip is rutabaga. They’re very similar, though rutabaga is a bit sweeter. Texture and consistency are also almost identical.

If you’re substituting turnips because you don’t love the flavor but have a recipe that calls for them, you can usually substitute a white potato and get similar results in a recipe.

If you want even more flavor, you can combine cabbage with radish in a raw dish, or cabbage with some mustard greens in a cooked dish.

Either way, you’ll get the sweet, slightly sulfurous taste from the cabbage along with the peppery heat from either the radish or the mustard greens.

While you can cook with radishes, they lose their heat when they’re exposed to heat, so it wouldn’t be the same.

How to Cook Turnips

Turnips are incredibly versatile and it’s nearly impossible to cook them wrong.

The one step that shouldn’t be ignored is peeling your turnips. Young roots will peel very easily though if you have a bit of an older turnip, a Y-peeler is the easiest solution, unless your quick and handy with a vegetable knife.

Most often, turnips are either boiled or roasted.

If you boil or steam your turnips, you can serve them as a side dish, enhanced with some garlic butter or fresh herbs like dill, rosemary, or basil. You can also mash them for a creamy, sweet alternative to mashed potatoes.

If you prefer to roast your vegetables, tossing them first with olive oil and some fresh or dried spices will bring out their flavor and add a crisp, butteriness to the outside edges.

Roasted turnips taste delicious when combined with other root vegetables, such as beets, carrots, and, of course, potatoes.

How to Make Turnips Taste Good

If you’re not yet a fan of turnips or if you have aged turnips that are a bit bitter, you can embellish the flavor using a few culinary tricks and treats, namely salt, butter, and cream.

Each of those ingredients will cut through the bitter taste of any vegetable and add a creamy, richness to your vegetable. Even better, roast some garlic and add that to your butter and cream as well.

Turnips also taste great with fresh herbs that lean towards the sweet, floral side of the herbal spectrum. Try roasting your turnips with some dill, rosemary, or basil.

There are different varieties of turnip that each has slightly different coloring, but most turnips have mostly white bulbs that tend towards purple near the top of the root, where the leaves start to grow. The tops are standard leafy greens.

Turnips and rutabagas are often confused for one another because of the white and purple coloring, and they are related vegetables though still unique.

Can You Eat Turnip Skin?

It is safe to eat the skin of a turnip, but unusual. They’re not particularly difficult to peel using a standard vegetable peeler, and the skin has a bitterness that lingers, leaving an unfavorable aftertaste in your mouth.

If you have a young, fresh from the garden turnip, the skin is probably thin and fresh enough that it won’t be overly bitter, so this would be the best way to give it a try if you’re curious.

Turnips are absolutely safe for dogs, and they’re considered a delicacy in the world of canines (so we hear). Most dogs will go crazy for turnips, so they make healthy, low calorie treats that your pup will love.

You can serve them to your dog with their food, as long as they are cooked or baked plain.

Dogs do not need seasoning to enjoy their food and salt is not good for them. You can also give them small raw turnips or dehydrated turnip pieces as chewy treats.

As with any new food, however, start with small amounts and allow your dog’s digestion time to get accustomed to them. It’s also always a great idea to check with a vet whenever you introduce new “people” food to your pooch.