The 3 Best Substitutes For Jicama 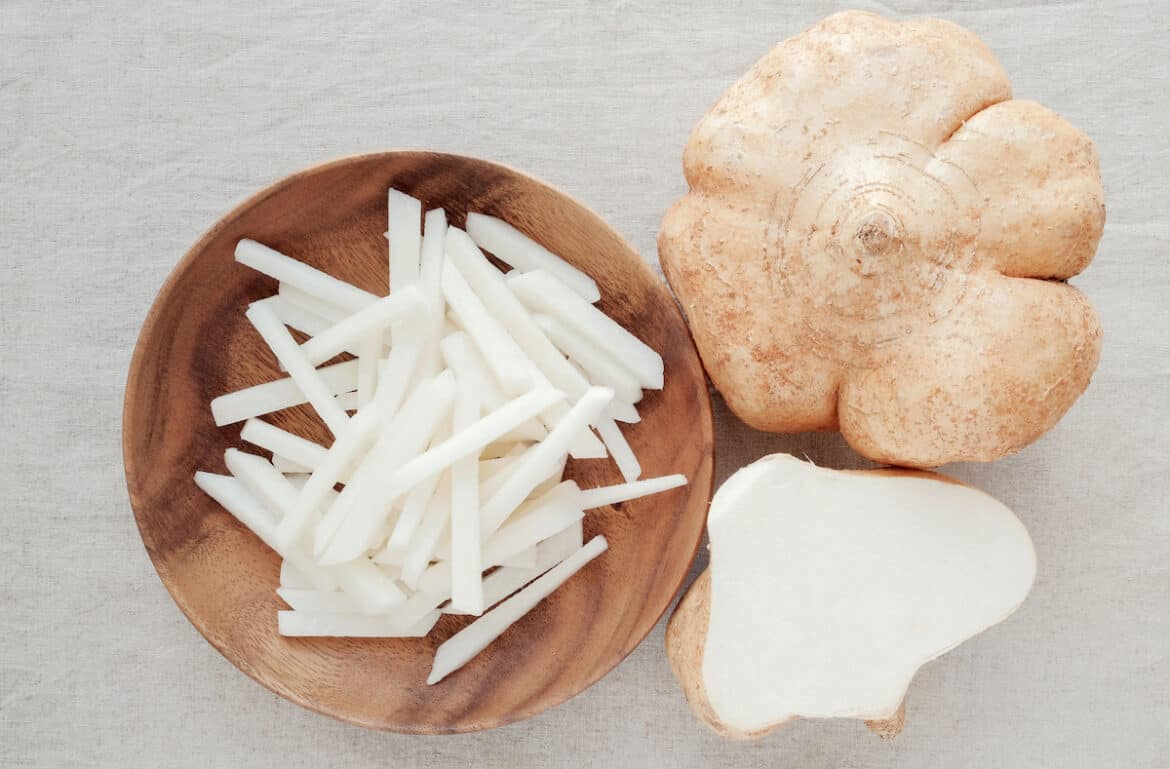 Most of us have developed certain habits when it comes to shopping for groceries. Our list of products rarely changes, we know the supermarket isles like our hands and thus, we often fail to notice the more intriguing vegetables or products that we could try.

While jicama is not a widely-available vegetable, if you are on this page, it is either part of your diet or you need a replacement since it is not available in your country.

With this said, what are the best substitutes for jicama? If you are looking for a raw substitute for jicama, try daikon radish or Jerusalem artichokes. If you need a replacement for a certain cooked meal, try water chestnuts since they are nearly identical both cooked and raw, although they are slightly sweeter.

Keep reading to learn everything you need to know about jicama and the best substitutes for jicama.

Jicama is a root vegetable that many people describe as a combination of apple and turnip. Originally, it was cultivated in the warm climate of the Mexican Peninsula but is nowadays grown in various regions around the world.

Jicama is a starch-rich vegetable, similar to potatoes and turnips. It has a slightly sweet taste, but is low in sugar, making it a good choice for people with diabetes or those following a low-sugar diet.

The vegetable is also known as Mexican radish. The root is safe to eat, but other parts of the plant are highly toxic.

Unfortunately, Jicama is not available everywhere around the world and not everyone can take advantage of its numerous benefits. On the good side, there are plenty of suitable jicama substitutes that you can use to achieve a similar taste or texture in cooking.

The health benefits of jicama are mainly derived from the unique combination of vitamins, minerals, and organic compounds, including (but not limited to):

Also, its antioxidant potential means that it helps fight cancer by neutralizing the effects of free radicals.

Overall, jicama is the right choice for people who have chosen to be healthy and strong.

It is most often eaten raw, but can also be used for soups and meals, although this reduces some of its health benefits.

The 3 Best Substitutes for Jicama

Ideally, you can substitute jicama with any relatively sweet vegetable with similar texture and crunchiness.

People even substitute it with crisp green apples and Asian pears which are fruits with significantly different properties.

While experimenting is always fun, here are three substitutes for jicama that have proven to be sufficient and we safely recommend.

Jerusalem artichoke has many names depending on the location and is a vegetable that is nowadays available everywhere. Originally cultivated in Central America (more specifically – Mexico like jicama), it is now also grown in Europe, Asia, and Australia.

This vegetable can be eaten raw, baked, or boiled. The tubers are slightly reminiscent of potatoes, although, with their number of small growths, they look more like ginger roots.

When it comes to the taste, it resembles a pear or a nuttier version of sweet potatoes. It is not strikingly sweet which makes it a perfect replacement for jicama which also has a similar flavor.

Water chestnuts are one of the most common products in Chinese cuisine. They produce bulbs that have firm white flesh and a light aroma.

Water chestnuts a pleasant taste and texture, as well as many health benefits for the human body. They are rich in vitamins and minerals and are low in sodium and fat.

Including water chestnuts in your diet can help improve your overall health and stimulate weight loss.

Water chestnuts are considered to be the most suitable substitute to jicama although they have literally almost nothing in common as plants and in appearance. Nevertheless, both are sweet in taste although water chestnuts are significantly sweeter.

Besides that, both have a similar texture that remains crispy even when cooked.

Daikon is a type of turnip with a long white root that resembles a thicker carrot. It is juicy and has high taste qualities.

It is widely used in traditional Japanese medicine due to its amazing healing properties and is another vegetable that we highly recommend for its long list of benefits.

Despite the obvious differences in appearance, we believe that daikon radish is one of the greatest substitutes for jicama since it is just as sweet, juicy, and crunchy as jicama. Ideally, you can replace each of those two with the other one for fresh dishes like salads.

The single major difference is that daikon has some spiciness besides the sweetness. In general, it not strikingly spicy but there are sorts of daikon radish that have a stronger flavor.

Last but not least, there are, in fact, six types of Daikon radish and you might be wondering which one to use as a substitute. As a whole, each of those types has a sweet taste although they differ in sweetness which gives you several viable options.

In other words, you can use any sort of Daikon radish but it depends on your personal preferences. If it was up to us, we wouldn’t recommend two of the types – Alpine and Shunkyo.

The first one is the sweetest type of Daikon radish while the second is quite spicy although also sweet.

Now that we have given you our recommendations, we should look at the nutritional values of each vegetable. If you are on a special diet or you count your calories, here is a small chart to make your choice easier.

As you can see from the chart, the substitutes mainly differ in calories and carbohydrates but this also means that they can truly be suitable for different diets.

Do you need to peel jicama?

Before anything else, you should know that the only edible part of jicama is the root. You should never try to eat the remaining parts like the leaves or flowers since they contain rotenone.

If you are unfamiliar, this is an insecticide that certain plants develop as a defensive mechanism.

As for the root, never try to eat it unpeeled. Not only will you hardly succeed due to the thick skin but it also contains rotenone which is highly toxic.

You will need a sharp vegetable peeler because the skin is truly tough.

Can you eat water chestnuts raw?

Although we mentioned that we highly recommend water chestnuts as a substitute for jicama for cooking purposes, you can most definitely eat them raw.

In fact, raw water chestnuts are significantly sweeter than canned or cooked. This is also the reason why we do not recommend them as a raw substitute – their sweetness goes too far beyond the sweetness of jicama. Just make sure to wash them thoroughly and peel them before you eat them raw.

Last but not least, make sure to consume the water chestnuts or use them immediately after you peel them because they do not keep for long periods. If you leave them out in the open for too long, they become home to parasites that you want away from your system.

If you need them for later, your best bet is to put them in water but still, you shouldn’t leave them for more than a couple of hours.

Do Jerusalem artichokes cause gas and bloating?

While this is highly individual and not applicable to everyone, you shouldn’t overuse with these artichokes in the first few tries. Gas and bloating are usually caused by the raw vegetable that we put in salads, therefore, it is a rare occurrence when cooked.

Up Next: How To Store Jicama – The Complete Guide

Can You Freeze Chocolate Milk? – The Complete Guide

Can You Freeze Miracle Whip?