The 7 Best Substitutes For Havarti Cheese 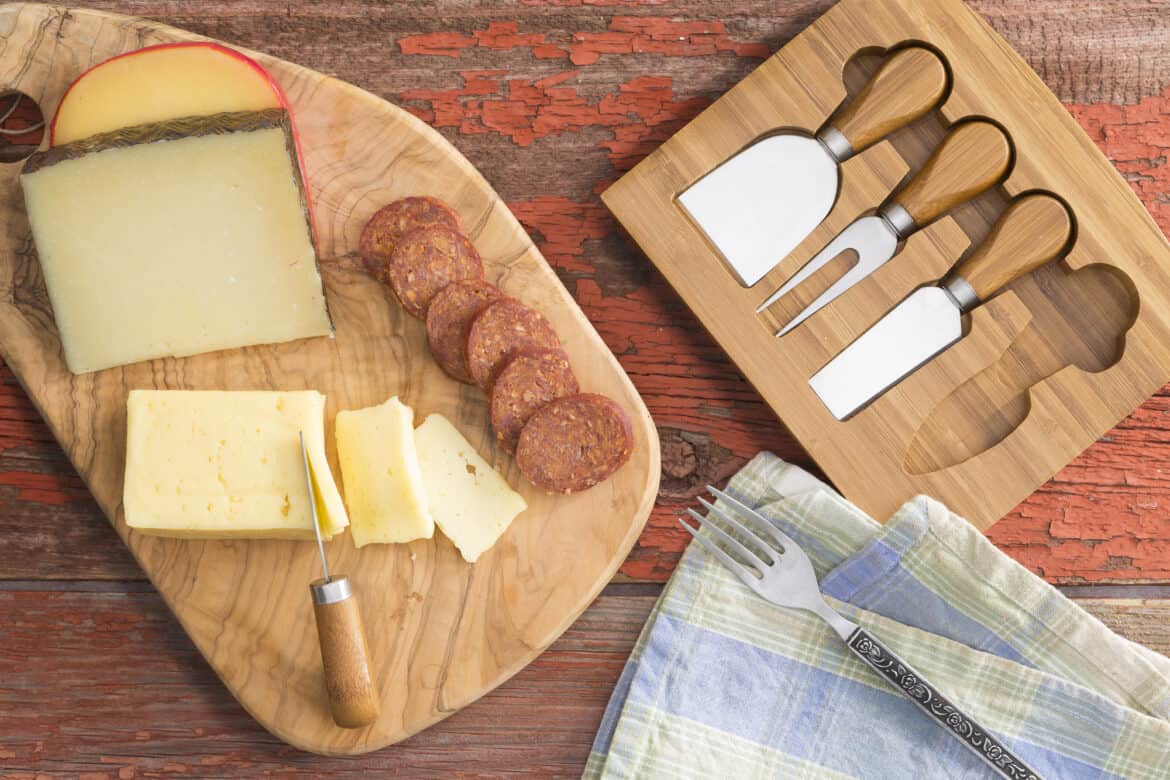 Some of the best cheeses you can stock up with are table cheeses. These types of cheese are so nice because you can use them for just about anything and they are always reliable.

Havarti cheese is one such cheese. It’s certainly a specialty cheese, but it’s the perfect table cheese that lets you melt, slice, grill, and more.

Whether you’re making a charcuterie board or you just want a sweet, aromatic cheese to add to a dish, Havarti is a great option.

Unfortunately, Havarti cheese is not always easy to find, so you might need to be familiar with some alternatives and other options to try when you’re in a pinch.

What is the best substitute for Havarti cheese? Havarti cheese is a Danish cheese, so when you’re looking for a substitute, you want to find other similar styles of cheese. Great options include Tilsit, Saint Paulin, Monterey Jack, and even Gouda.

In this guide, we will share the 7 best substitutes for Havarti cheese. We will cover all of the best options and what makes each of them great. We will also give you some insight as to how you can use Havarti and what taste sets it apart.

If you’re not familiar with Havarti cheese, it’s a semisoft Danish cheese. It is very smooth and buttery. It’s incredibly unique in appearance, texture, and flavor. It has a slight sweetness that sets it apart from other cheese.

Havarti cheese is creamy and white in color. It was actually developed on an experimental farm called Havarthigaard, where the name came from. Havarti cheese can be used in cooking, but it’s also the perfect snacking cheese.

You can make a delightful charcuterie board, slice it up to serve with wine and crackers, or even put it on the grill. You don’t even have to pair it with anything, you can just eat it by itself if you like.

Some people believe Havarti to be one of the best cheeses for fondue because it is so creamy.

Havarti is unique but also incredibly versatile. In terms of flavor, Havarti cheese is slightly sharp.

It has the aroma of a buttery cheese and the sharp flavor can sometimes be very direct. Its sharpness is comparable to something like Swiss cheese.

When you take a bite, it’s smooth and buttery and tends to have just a hint of sweetness.

How sweet it tastes can depend on the variety of the Havarti cheese and how it was made, but the sweetness is always there. Havarti cheese is also slightly acidic.

This cheese ages somewhere around 3 months and can age longer. As it ages, it takes on hints of saltiness as well as hazelnut flavors, so the aging of the cheese can adjust the overall flavors as well as the texture.

We’re ready to get down to business! You know and understand what Havarti is and what sets it apart. What do you do in a pinch when you run out of Havarti or you simply can’t find any? It seems tragic that you would ever run out but there are solutions that can work quite well.

Below you will find the 7 best Havarti cheese substitutes, complete with descriptions and just what makes them a viable alternative when you need it.

Our favorite substitute is Tilsit cheese, and we think you will find that most people agree this is the closest substitute you will get.

We found that it is comparable in both flavor and appearance, which means you could easily sneak it by as Havarti.

This type of cheese is very easy to find in European markets, but it also tends to be readily available in a lot of different delis that have specialty cheeses as well.

This means that when you simply can’t get your hands on a fresh block of Havarti, you have another suitable option that works really well and is easy to find.

The nice thing about Tilsit is you can use it for just about anything that you can use Havarti for.

These are almost universal substitutions across the board, so you can rely on Tilsit when you need a solution and you don’t want to cut any corners.

Tilsit cheese is very pale yellow in color and is semi-hard in texture. It’s a fairly mild cheese that has just a slight hint of sharpness to it. It’s very buttery and creamy, like traditional Havarti cheese.

It is the best substitute option you are going to find.

Saint Paulin is semi-soft. You can cut it and melt it and it works just like Havarti in all of the ways that count. Saint Paulin is slightly aged, which means it might have a deeper flavor overall.

It won’t be quite as sharp as Havarti is known for, but it will be fairly close. You get the same creamy and buttery texture but also a richer flavor, so your sweet and sharp flavor is changed.

Saint Paulin is a cheese that is most popular for cheese boards and similar presentations, but it can melt and does so nicely if you need it to.

Saint Paulin is still creamy and mostly soft. It will be buttery and it slices nicely. The largest differences you will find are the missing hints of sweetness that Havarti cheese is known for.

If you’re looking for a simple solution that you can find at just about any grocery store or deli, Monterey Jack is the solution for you. Monterey Jack is a good substitute for Havarti, but the texture will be noticeably different.

Monterey Jack tends to be denser and heavier but it has that mild, buttery flavor that people love about Havarti. If you’re melting cheese, no one will notice if you use Monterey Jack instead of Havarti.

Monterey Jack is another pale yellow cheese, which is one of the most immediate differences to Havarti. This cheese is an American cheese that is semi-hard, so it tends to be harder than Havarti cheese is in texture.

Monterey Jack compares in the flavor department, though. It has that touch of sharpness with a hint of sweetness and that is really what makes it a great option if you need a Havarti substitute.

Esrom is a Danish cheese that you can use to substitute for Havarti. Since it’s a Danish cheese, the buttery and creamy texture is reliable for a substitute. Esrom is close in terms of color, texture, and style, so it does make a good replacement.

Esrom tends to be sweeter than Havarti cheese, so this is something that might stand out slightly. It has a full, sweet flavor, and a steady, pungent aroma. Typically, the color is a very pale yellow, nearly white in shade.

It’s semi-soft, which leaves you with the buttery creaminess and sweet flavor that you just might be after. Another name for Esrom is Danish Port Salut. These terms are interchangeable.

Here is another good option that is fairly easy to find in most places. Young cheddar can be used because it has a similar flavor as well as texture.

You need to be careful when you select this option, however. Note that we specifically mention young cheddar. If you use aged cheddar, the flavor will be too sharp to really work as a substitute for Havarti.

The same concept goes for using sharp cheddar. It’s too sharp and doesn’t have the sweetness of Havarti, so it won’t make a good substitute.

Aged and sharp cheddar are not buttery and creamy and are more of a semi-hard cheese, although they can be melted.

Be aware that even young cheddar will be slightly firmer than Havarti, but it can work as a good alternative when you need it.

Emmental cheese is fairly unique. It’s a yellow color, so this will stand out against Havarti, but in most other terms, it’s pretty similar.

Emmental is slightly harder as well. However, it’s a medium hardness, so it won’t be too noticeable, just slightly less creamy.

This is a Swiss style of cheese, so it has holes much like Swiss. This will give it a different appearance as well. However, it has that buttery texture and some slightly fruity notes that give it some sweet flavor like Havarti.

Finally, you can use Gouda as a reliable substitute for Havarti cheese. Gouda is sweeter than Havarti, but you probably won’t notice a substantial difference. The nice thing is that gouda is easy to find.

Gouda is a Dutch cheese and is very common. It’s nice and mild and it’s pretty creamy in texture. In appearance, it’s about the same color. When you’re serving cheese cold, gouda is a great substitute.

Up Next: Can You Freeze a Cheese Ball?