The Best Substitutes For Celery Root 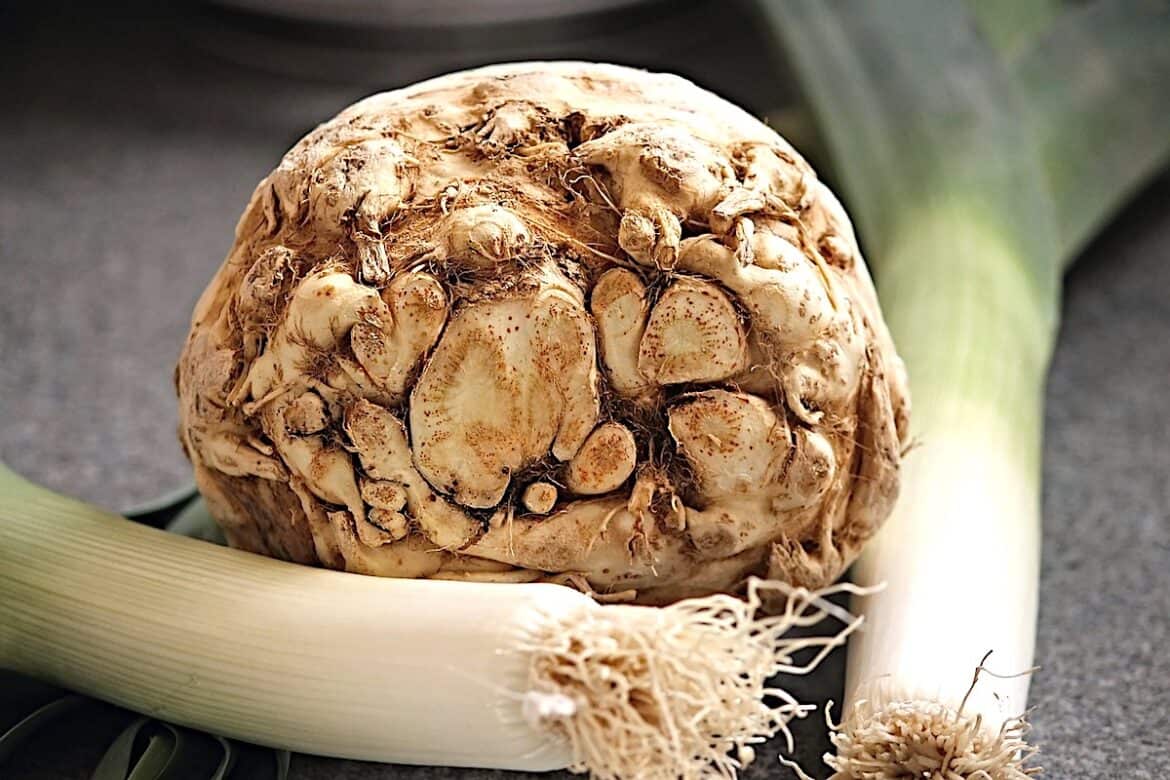 There are several ways you can use celery root in your recipes. You can grate it into salads, make a creamy soup with pureed celery root, or roast it with other vegetables.

But what about when your recipe calls for celery root and you can’t find it in your local market? Can it be substituted?

What are the best substitutes for celery root? Celery root can be substituted by other vegetables including parsley root, parsnips, turnips, carrots, daikon radishes, jicama, fennel bulb, and chopped celery.

Read on to find out more about the best substitutes for celery root.

Celery root, also known as celeriac, is one of the most underrated vegetables and, although it may not be the most aesthetically pleasing, it is packed with flavor and nutrients.

Some people believe that celery root is the root of celery, but that is not the case. Celery root and celery are members of the same family but are two different vegetables.

It has an impressive nutrient profile and is loaded with essential vitamins and minerals. It tastes quite sweet and creamy and can be eaten both cooked and raw.

While celery root is sometimes hard to find at your local grocer depending on where you live, we’re willing to bet you’ll have at least one of these substitutes listed below!

Parsley root is the root of the fragrant parsley herb that we all love to use for garnishing and flavoring. It looks quite similar to parsnips (another great celery root substitute) with its tapered shape, off-white color, and rough furrowed texture.

It is aromatic with a strong flavor, usually compared to a combination of celery root, parsley, and carrot. When eaten raw, it is crunchy and tender, and when cooked, it turns smooth and creamy.

Parsley root is a great substitute for celery root in providing a similar texture and color. When it comes to the flavor, though not exactly the same, it provides a similar flavor profile as celery root with extra hints of parsley, carrots, and potato.

For a slightly stronger celeriac flavor, you can add some celery seeds or celery salt to your recipe.

With a celery-like taste, parsnips are a great substitute for celery root, though their herbal aroma is a bit stronger.

They are rich in vitamins C and E and help build a stronger immune system. They look like white carrots and have a smooth and light texture.

As far as the taste is concerned, when cooked, parsnips are slightly sweeter than celery roots, which is why you must adjust the amount of sugar in your dish accordingly.

They make for a great celery root alternative when making stews, soups, and salads. Just make sure to match the proportion of parsnips to celery root when substituting them for the latter.

Turnips are a common vegetable that is very easily found in most grocery stores. They are apple-sized root vegetables with a firm texture and crunchy appearance.

They have a sweet, peppery taste, similar to that of radishes, and are a great alternative for celery root due to their taste and versatility.

Turnips are loaded with fiber and essential vitamins and minerals and can be cooked, braised, simmered, roasted, sauteed, pureed, as well as eaten raw.

Carrots are a popular kitchen ingredient that is not just easy to buy but also loaded with vital nutrients.

They have a sweet taste when cooked, similar to that of celery root, and the two also share a similar texture.

If your recipe doesn’t mind the orange color of carrots, they can easily and very successfully be substituted in place of celery root when making stews and soups.

They are also a great option for salads if you are looking for something crunchy.

However, if you’d like to add a nice aroma and a bit more of an earthy flavor, you could add some celery, celery seeds, celery salt, or parsley into your recipe.

They make excellent substitutes for celery root, especially if you are making roasted meat, and can be enjoyed both cooked and raw.

Daikon radishes have a high concentration of enzymes that aid in the digestion of starch and fat. They also contain high amounts of vitamin C, potassium, and phosphorus.

Similar to carrots, daikon radishes are not very aromatic and lack the celery root-like smell. If you wish to level up the aroma of your dish, you may combine them with celery or coriander.

Jicama is a not so common root vegetable but a great substitute for celery root nonetheless. It is also called yam bean, Mexican turnip, or Mexican potato, and has a sweet and mild flavor.

Nothing can beat jicama as a celery root substitute, especially when it comes to salads. It is usually eaten raw and is amazingly crunchy and juicy.

You can also cook it if you want, although if that is the case, make sure to cook it only for a short time to retain its crunchy texture.

Usually described as tasting like a sweeter and juicier version of a potato, jicama is rich in vitamins, minerals, and fiber, and is known to be low in calories with a very low glycemic index.

Fennel bulb is the white base of the fennel stalk with light feathery leaves that look like dill. It has a crunchy texture and a fresh, aromatic flavor that most people describe as “anise-flavored”.

It has a celery-like smell when raw and can be eaten in a variety of ways. A great substitute for celery root, fennel bulb can be sauteed, roasted, and added to soups and salads.

With a low-calorie content and a high nutrient profile, fennel bulb is a healthy addition to your daily meals.

One important thing to note is that since fennel bulb is softer and cooks faster than celery root, when used as a substitute for the same, make sure to shorten the cooking time or add the fennel bulb to your dish later on when it is almost ready to prevent it from being mushy.

Despite belonging to the same plant family, celery and celery root are actually more different than celery root and parsley root.

With wide parsley-like green leaves and a thick, juicy stalk, celery is a milder substitute for celery root and has an earthy plant-like taste.

Celery is watery; therefore, you may be required to add a thickener to your dish when using it instead of celery root. You may use potatoes, parsnips, carrots, parsley roots, or even some cornstarch with chopped celery for a thicker consistency.

Let’s get to the root of any remaining questions you might have about celery root.

What Is The Best Way To Store Celery Root?

There are several ways to store celery root to ensure it doesn’t go bad and can be used in your recipes.

You must start with prepping the celery root by cutting off any leaves and roots and gently brushing off any dirt. Do not wash it before storage to prevent discoloration.

Next, put the celery root in a plastic bag and store it in the vegetable compartment of the refrigerator to ensure it stays fresher for longer.

If you have a big celery root, cut as much as is required and wash, peel, and use it in your dish. Keep the remaining part back in the refrigerator to be used later.

How Long Does Celery Root Last In The Fridge?

If the correct storage procedures are followed, celery root can last in the fridge for about 10 to 14 days.

If you keep it in the fridge without a plastic bag, its shelf life will decrease to only 3 to 4 days and the celery root will be more prone to discoloration.

It would help prolong its life if the celery root is taken out of the fridge only when it is ready to be used. The same goes for washing it.

It is difficult to store celery root once it has been cut since it oxidizes faster. Therefore, as a rule of thumb, try to use the remaining portion as soon as possible.

Can You Freeze Celery Root?

Celery root does not freeze well, though it may be tempting to try, especially for when it is not readily available in the market.

The taste of frozen celery root will not be the same when it is defrosted and cooked. Therefore, it is best to use fresh celery root or opt for one of the many substitutes listed above.

Celery root, just like any other fresh produce, is perishable and goes bad after a few days, especially if it isn’t stored properly or wasn’t fresh to begin with.

Some of the common signs to look out for when storing celery root for an extended period include a slimy and mushy texture, a funny odor, and some discoloration.

It is best to discard the celery root as soon as you notice any of these signs.

Up Next: The Best Substitutes For Celery Seed

The 8 Best Tomatoes For Juicers