Home Foodsguy Parsnips Vs Carrots – What’s The Difference?
FoodsguyThis vs That

Parsnips Vs Carrots – What’s The Difference? 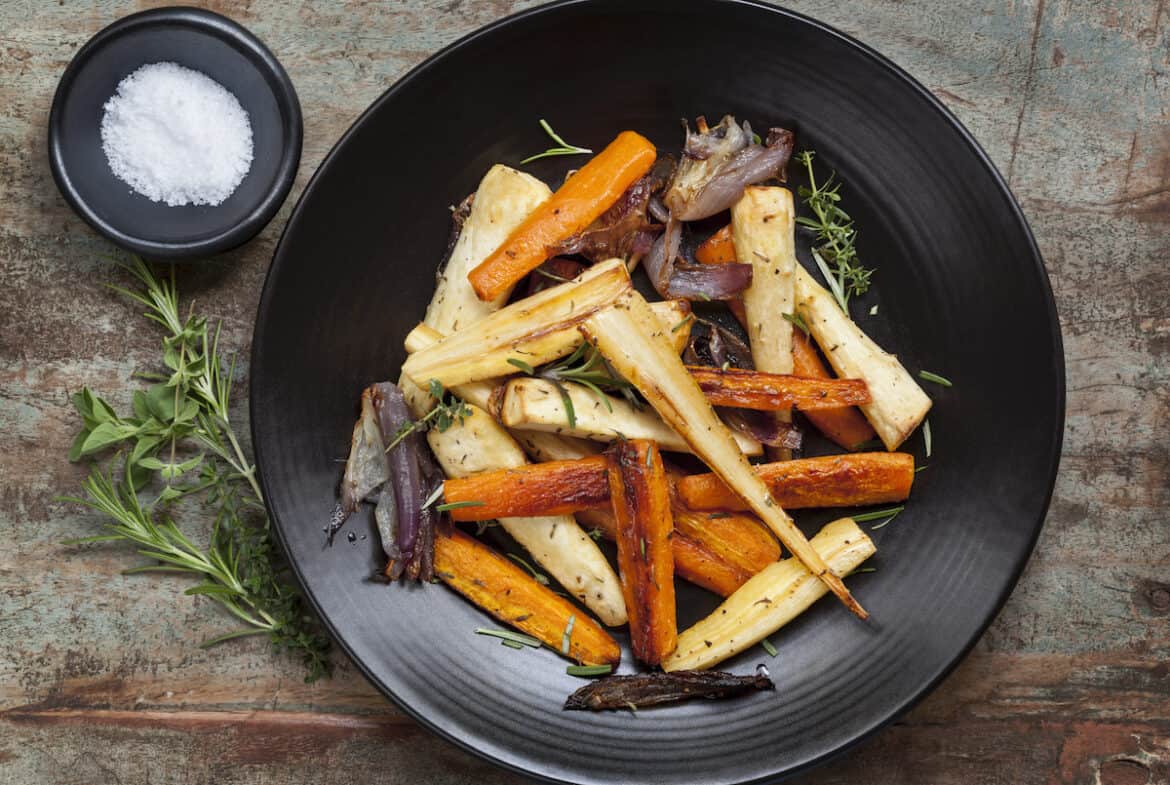 When we learn to cook, we rarely pay attention to more unconventional fruits and vegetables. Whether it’s because they are rarer or because they seem more complicated, a novice cook would rarely be interested in parsnips as an alternative to carrots.

However, when we delve into the art of cooking and start looking for alternatives to expand our variety of dishes, we begin to notice seasonal vegetables and others that rarely appear in regular recipes.

Parsnips, for instance, are seasonal root vegetables that closely resemble carrots but have different properties.

With this said, what is the difference between parsnips and carrots? Besides the obvious difference in color and the fact that they are not from the same family of plants, the major difference is in their flavors. While both vegetables are generally sweet, parsnips have a more spiced sweetness than carrots.

Keep reading to learn everything you need to know about carrots vs parsnips.

The origin of carrots dates back to 5,000 years ago in Central Asia, somewhere around the region of Afghanistan before they gradually spread throughout the Mediterranean.

The first carrots were white, pink, yellow, green, purple, and black, but not orange.

It was only in the 1600s when Dutch gardeners managed to cultivate the familiar orange carrots. Nowadays, these are the most popular variation of carrots, followed by yellow and red varieties, which are common in Asian cuisine.

Although it is known that a lot of the nutritional value of the original darker carrots has been lost with the cultivation of the nowadays regular orange carrots, they are still considered a “superfood” and bring numerous benefits to our health.

As for the flavor of carrots, carrots have a curious composition of flavors that ranges from sweet to relatively bitter throughout the different parts of the carrot.

All in all, carrots are generally sweet which is why they were often used as a sweetener before sugar reached the European continent.

Carrots are generally healthy to consume and we dare to say that you should actually try to incorporate them into your diet if you haven’t already.

There is a certain truth in the old wisdom that carrots are good for your eyes. With the abundance of beta-carotene in carrots, we can safely say that this is one of the pearls of wisdom that you should remember.

With this said, beta-carotene converts into vitamin A in the liver. Then, Vitamin A is further transformed into rhodopsin in the retina which is pure pigment, necessary for our night vision.

It has also been proven that beta-carotene protects against degeneration of macula and chenille.

Decrease the Risk of Some Types of Cancer

Scientists have found that frequent consumption of carrots leads to a reduced risk of various cancers such as lung, breast, and liver cancers.

This is once again due to the high amounts of beta-carotene and fibers in carrots.

Antioxidants prevent cell damage due to oxidative processes in the body.

Carrots contain various antioxidants, each of which has its own unique protective function.

Beta-carotene is the most common antioxidant, especially in orange carrots. Other antioxidants found in carrots are alpha-carotene, lutein, caffeic acid, coumaric acid, ferulic acid, and anthocyanidins.

This means that whichever variety of carrot you choose, it will certainly provide your body with a large dose of antioxidants.

According to studies, frequent consumption of carrots can reduce the risk of heart disease. It is also known that this same consumption will lower your cholesterol levels which is directly linked to the prevention of numerous heart diseases.

How to Select and Store Carrots

When choosing carrots, keep in mind that their roots should be firm, smooth, relatively clean, and brightly colored. The richer the orange color of the carrot, the higher the beta carotene content.

Carrots that are too cracked or soft should be avoided. If carrots are offered without their green tips, the color at the end of the trunk is indicative of their age and those with a fuzzy color should be avoided.

Because sugars are concentrated in the kernels of carrots, generally those with a larger diameter will have a larger core and be sweeter.

To preserve the freshness of carrots, it is necessary to reduce the amount of moisture they lose. Therefore, it is necessary to store them in the coldest part of the refrigerator in a plastic bag or wrapped in a paper towel, which will reduce condensation.

This way the carrots will stay fresh for about two weeks. They should also be stored away from apples, pears, potatoes, and other fruits and vegetables that produce ethylene gas, as it will make them taste bitter.

Parsnips are a prominent representative of the autumn-winter vegetable market but are often overlooked by many who do not know what they are missing. People often describe them as large carrots, a strange-looking turnip, and whatnot.

On the contrary, parsnip is an ancient root vegetable, grown for generations because of its nutritional value and health benefits.

It is difficult to say exactly where parsnips originate from but it has been in use since antiquity. All that is known is that it is of European origin.

Before the Europeans learned about the existence of potatoes, all vegetable dishes were cooked with parsnips. In some countries, parsnip remains a ritual food: in England, for example, it must always be present at the Christmas table.

In terms of flavor, parsnip has a pleasant sweet taste. It is said that if it is left to overwinter in the ground and taken out in the spring, its sugar content will be much more pronounced.

So – if we decide to make a generalized characteristic of parsnips, it could look like this: sweet and fragrant roots that resemble carrots but are more gentle and discreet.

The following benefits outline the major impact that parsnips can have on our lives. While there are numerous other known positives that would take pages and pages to explain, we have selected those few that stand out.

How to keep your cardiovascular system is a major topic of discussion.

While it is obvious that fruits and vegetables are the keys, parsnips have an even greater impact than you would normally expect. Given its high potassium content, it lowers blood pressure as well as stress exerted on the heart.

The high levels of folic acid in parsnips are an ideal supplement because they lower the levels of homocysteine ​​in the blood, which are associated with a higher risk of heart disease.

Against Cholesterol and Diabetes

The high percentage of soluble fiber in parsnips makes it suitable for the prevention of diabetes and heart disease.

Its proven use as a salad ingredient or puree has been shown to reduce blood cholesterol levels. In addition, it is a suitable food for diabetics because it contains safe natural sucrose and fructose.

Although the protein content of parsnips is not impressively high, the full range of minerals and vitamins that parsnips contain means that it is an ideal food or food supplement.

It can help balance diets that are erratic or characterized by nutritional deficiencies. Just as carrots are great to eat between meals, parsnips are also a healthy option, unlike potato chips and junk food.

Parsnips are rich antioxidant vitamins and organic compounds that protect from bacteria and other invaders just like they protect us from toxic by-products.

Vitamins C and E act as antioxidants in the body and eliminate or neutralize free radicals that can cause chronic diseases, including cancer.

Vitamin C also stimulates the production of white blood cells to attack diseases and external microbes that have entered the body, and also acts as a key element in the production of collagen, which is a major building block of the body.

As a low-calorie high-soluble fiber option, parsnips are a satiating food that stops the release of hunger hormones. This can significantly reduce the likelihood of eating between meals and help achieve the intended weight loss.

Also, optimized digestive processes help eliminate feces and put your nutrient intake at its peak so that you can get the most healthy nutrients from your diet.

How to Select and Store Parsnips

Parsnips are found in the months between September and March, which makes it the ideal winter vegetable. Look for small or medium roots because the larger ones are too fibrous. Choose hard parsnips, and avoid one with traces of brown spots and atypical wrinkles.

Store in the refrigerator unwashed and wrapped in a paper bag. Like potatoes, it can be stored in a dark and dry place out of direct sunlight. You can generally store parsnips in a refrigerator for not more than a month.

Nutritional Differences Between Parsnips and Carrots

The data in the following nutritional chart has been made based on 100grams of parsnips and carrots. As for the daily value of the nutrients, the percentages are based on a regular 2000-calorie diet.

As you can see for yourself, parsnips and carrots are relatively identical in nutritional values. The major differences can be seen in the reversed abundance of Vitamins A and C in the two vegetables, as well as in the increased amount of sodium in carrots.

Can I substitute parsnips for carrots?

In general, people substitute these two vegetables freely for all kinds of recipes. In fact, in most cases, you can use carrots instead of parsnips if you want to get a milder or naturally sweeter taste.

If you search for parsnips recipes online, you will see that there is also an abundance of ideas that suggest mixing the two vegetables together. In countries where parsnips have a bigger role in the local cuisine, you can often see salads and dishes with both.

In other words, you can substitute parsnips for carrots and vice versa, as well as mix them together.

However, if you want to get the best of both vegetables, we suggest keeping them separated in order to achieve their full taste capabilities.

Up Next: Carrot Cake Without Oil

Can You Mix Chicken and Beef Broth?