Home Foodsguy Seasoned Vs Unseasoned Cast Iron – What’s The Difference?
FoodsguyThis vs That 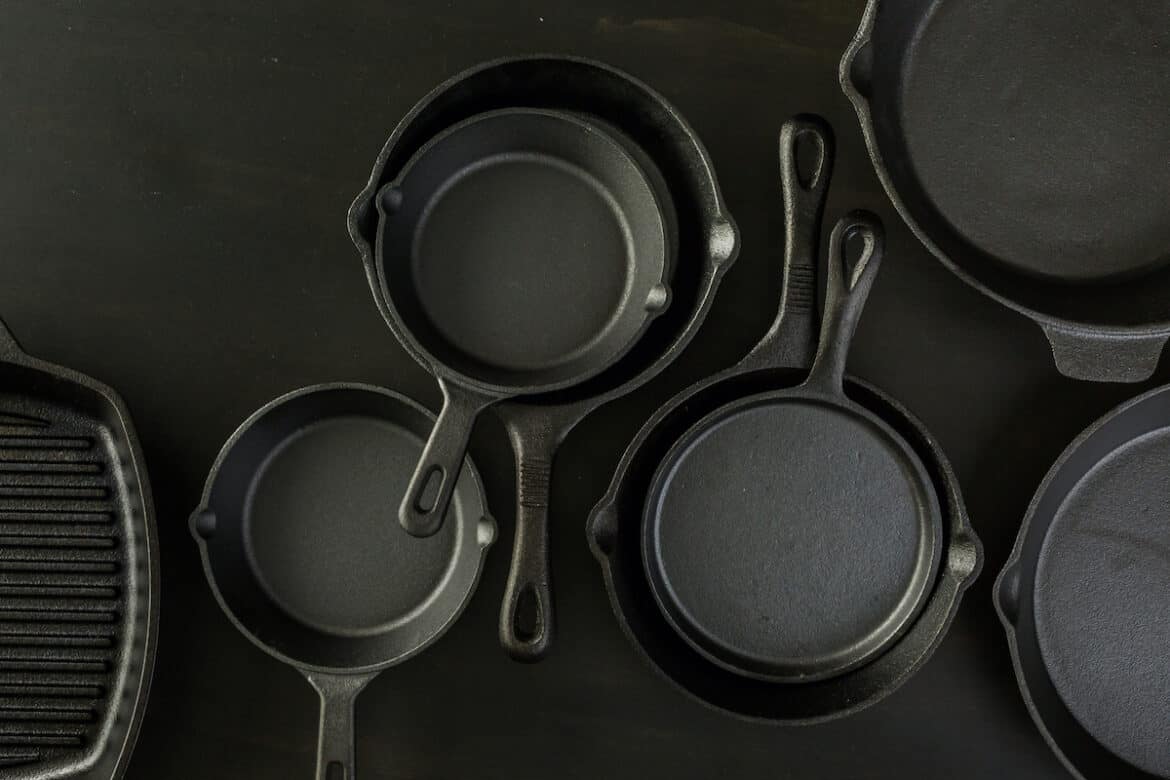 Robust, dependable, and nearly indestructible—this is cast iron cookware for you.

Designed and manufactured in the late 1800s as people transitioned from cooking over an open fire to using camping stoves, cast iron cookware gained popularity as a durable means of cooking a variety of foods.

It includes cast iron pans, cast iron grill pans, cast iron baking pans, Dutch ovens, and so much more, and can be used for baking, braising, broiling, pan-frying, roasting, sautéing, searing, and a variety of other cooking techniques.

Made using pure molten iron without any adulterated materials, cast iron remains one of the most popular cookware to date and is favored by many home cooks as well as professional chefs.

While it is true that cast iron pans are a class apart when it comes to perfectly seared steak or crispy hash browns, there are countless debates on whether or not to season them. To decide, you need to first understand their differences.

What Is Cast Iron Seasoning?

Cast iron seasoning refers to the process of layering your cast iron skillet with hardened oil to give it a protective layer that appears natural and makes it easier to cook with and clean.

It is done by heating a thin coating layer of oil on your cast iron cookware at high temperatures so that the oil bonds with the iron and becomes a hard, nonstick surface through a process called polymerization.

Since cast iron has a naturally jagged and uneven surface, it allows the carbonized oil to adhere to it and create an immaculate seasoning coat.

Not only does this make it easier to use and clean but also prevents the cast iron from corroding and rusting due to the oxygen and moisture present in the air.

With the market filled with a variety of cast iron cookware, you can either get iron skillets and pans that are unseasoned or have been pre-seasoned by the manufacturer.

The way to tell them apart is that unseasoned cast iron has a distinctive matte grey finish whereas pre-seasoned skillets have a sleek, black finish.

Most manufacturers sell pre-seasoned cast iron cookware where they protect the material with a light protective coating that is not necessarily oil and advertise it as “ready to use”.

Therefore, although you can use pre-seasoned cast iron as is, the seasoning is so light that it will cause the food to stick to the surface of the pan and turn out not so great unless, of course, you use heaps of oil while cooking.

It will also be extremely dull when it dries and will be susceptible to rusting and corrosion since there is no proper barrier protecting the cast iron.

The solution to this problem is seasoning. Whether you have an unseasoned or pre-seasoned cast iron skillet, you must season it properly before using it to protect its luster and give it non-stick capabilities.

The shiny black patina on seasoned cast iron makes it easier to use and last longer and allows you to cook foods that tend to stick to the surface without a worry.

How To Season Cast Iron

Before you use a brand-new cast iron pan or skillet, regardless of whether it comes unseasoned or pre-seasoned, we recommend you season it properly at home in your oven.

Alternatively, you may start with cooking dishes that require large amounts of oil and that render a lot of fat. In this way, you will be inadvertently seasoning your skillet while cooking.

Here are step-by-step instructions on how to season cast iron in an oven to maintain the seasoning of your cast iron cookware or to restore a rusty one:

Although it is commonly heard that you must never wash a cast iron skillet with soap and water, it is important that you do when you’re re-seasoning it.

Use a minimal amount of mild soap to get rid of any food particles from the surface. In case of rust, use a ball of steel wool and gently scrub it off.

This will help you create a smooth coating without removing its existing seasoning, which is also why you must never put a cast iron skillet in a dishwasher.

Next, you need to thoroughly dry the skillet to remove any water droplets as this may be a hindrance in smooth seasoning.

You may use a paper towel or lint-free cloth, or you may also put it over low heat on the stovetop for a couple of minutes to get rid of any moisture on the surface.

Step #3: Rub Oil On The Skillet

After the skillet is completely dry, you can move on to coating its surface with some cooking oil. Although you can use any type of oil, for best results, go with canola oil, corn oil, or vegetable oil.

These are the best choices since you need an oil with a high smoke point that can withstand the high temperature without burning and filling the oven with smoke.

Using a paper towel or lint-free cloth, spread a thin layer of oil on the skillet’s surface, making sure to cover the entire surface area, both inside and out.

Make sure to not go overboard with the oil as too much of it won’t season the skillet properly and will turn into hard droplets of oil on the surface. You just want a thin layer coating the entire pan.

Step #4: Heat The Skillet In An Oven

The best way is to put the skillet upside down on the center rack of the oven so that the oil doesn’t pool on its cooking surface.

Leave it in the oven for about half an hour, after which you can turn off the oven and let the skillet cool inside it. This is an important step as it will allow the seasoning to sit and stick to the surface of the cast iron.

For a truly solid layer of seasoning, you can repeat this oiling and heating process a couple of times. It can be especially useful when fixing a rusted skillet that has been wrecked due to misuse.

To re-oil it, take the skillet out of the oven (making sure to use oven mitts), rub some more oil on it, and pop it back inside for an additional 30 minutes. You may repeat this process until you are satisfied with the results.

Now that you know the differences between seasoned, unseasoned, and pre-seasoned cast iron and the best way to season one, here are a few additional questions we thought you might have:

Can you cook in an unseasoned cast iron pan?

Yes, you can cook in an unseasoned cast iron pan; however, it is a bit more complicated with a few additional cooking steps.

Unseasoned cast iron may take a long time to heat up, and in some instances, it might not heat properly at all.

This causes the food to stick to its surface, which is why you need to preheat it on a medium flame for about 10-15 minutes before using it.

Once you get used to your unseasoned cast iron pan and figure out the level of preheating required to make the surface less sticky, it’ll be much easier to use.

But if you want to skip the hassle and switch to easy cooking, we suggest you season your cast iron pan.

There are many reasons why your seasoned cast iron skillet might turn sticky. Two of the most common reasons are that you may have used too much oil to season it or didn’t heat it long enough in the oven.

To get rid of the stickiness and to make your seasoned pan smooth again, simply wipe the excess oil with a paper towel and put the cast iron pan in the oven for about an hour.

Up Next: Does Italian Dressing Have Dairy?

Does Italian Dressing Have Dairy?

How To Make And Use Cinnamon Extract