Home Cooking Tips Can You Put A Cast Iron Skillet In The Oven?
Cooking TipsFood SafetyFoodsguy

Can You Put A Cast Iron Skillet In The Oven? 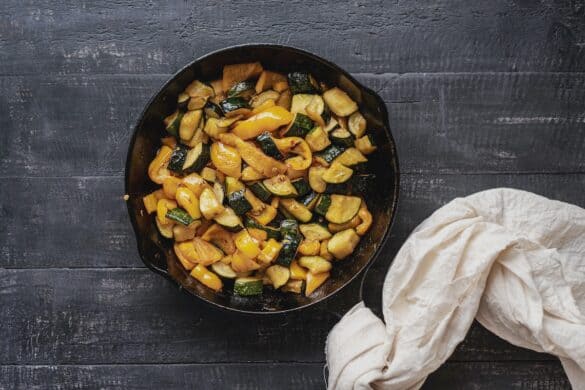 Cast iron cookware is among the gold-standard of kitchen equipment and is a must-have for all chefs and home cooks.

It is unparalleled in terms of durability, versatility, and functionality, and can be used to make bread, appetizers, main courses, and desserts.

Simply put, only someone who has used a cast iron skillet in their kitchen knows its limitless potential.

If properly taken care of, these kitchen workhorses can last a lifetime and are risk-free in terms of health. You don’t have to worry about harmful chemicals leeching in your food as with Teflon-coated cookware.

They retain heat really well, are non-stick when seasoned properly, and make the food prepared in them more flavorful. But are they oven-safe?

Read on to find out whether all types of cast iron skillets can (or can’t) be put in the oven, how long they can stay in there, how to season them properly, and other tips for prolonging their life and durability!

Can All Types of Cast Iron Skillets Go In The Oven?

Cast iron skillets are generally oven-safe and can withstand high temperatures for a reasonable amount of time.

Cast iron melts at very high temperatures above 2200°F and doesn’t start to show signs of metal fatigue until it reaches around 700°F, which is a much higher temperature than the average home oven is capable of.

You can safely use a cast iron skillet in the oven or under the broiler, where it will be able to retain heat for a long time, making it an ideal choice for cooking and baking.

When it gets really hot, you can handle it using an oven mitt, silicone holder, or kitchen towel.

Most recipes call for around an hour of cooking in the oven, and that is completely fine since a cast iron skillet can withstand being in the oven for two hours.

For most recipes, you can cook your food on the stove at first and finish it off in the oven. You can also do this in the opposite way by first cooking your food in the oven at a low heat and then transferring it to the stove for a perfect sear.

What’s great is that you don’t have to worry about transferring the food from a cast iron skillet to another pan before putting it in the oven. You can simply preheat the oven and put your skillet in without a second thought.

However, you must keep in mind that not all cast iron skillets are made equal, and some come with wooden handles making them not safe to be used in the oven.

Therefore, if your cast iron skillet has a wooden handle, do not try putting it in the oven and just stick to using it on the stove.

The enamel forms a useful layer that protects the cookware from rust, eliminates the need to season it, and allows it to be thoroughly cleaned. It is also great for slow cooking and for drawing flavor from foods.

They can be used on various heat sources such as the microwave and grill, and are available in a variety of color options. But are they oven-safe?

Anything higher than that will cause the enamel coating to crack and chip.

Another thing to keep in mind is that since enameled cast iron skillets are made using thinner pieces of metal as compared to their seasoned variants, they can easily warp if not handled properly.

Here are a few tips on using enameled cast iron skillets in the oven:

How To Season A Cast Iron Skillet In The Oven

Seasoning is an important part of using cast iron skillets to prevent them from rusting and to give them a perfect non-stick finish.

It is done by heating thin layers of oil that seep into the pan’s surface and gets rid of any roughness on the metal that could cause the food to cling to it.

As the oil is heated, it bonds to the metal in a process called polymerization and converts the fat into a type of plastic that eventually turns into a hard and blackened surface that protects the metal from oxidizing and rusting.

Seasoning is a fairly easy process done by heating the cast iron skillet in the oven. Here are step-by-step instructions on how to perfectly season it in the oven:

Now that you know whether a cast iron skillet is oven-safe or not and how to season it properly in the oven, here are a few additional questions on caring for these kitchen staples!

How to clean a cast iron skillet?

Once the pan has cooled down after cooking, rinse it with warm water, sprinkle a bit of baking soda on top of it, and gently scrub it using a nylon brush.

Baking soda has anti-bacterial properties and will help neutralize any flavors or odors from whatever you just cooked.

Don’t soak the skillet in water since it will cause it to rust. Just let it dry completely and apply a thin layer of oil while the skillet is still warm.

No, cast iron skillets are not dishwasher-safe. They are old-fashioned kitchen items that are best washed by hand using a mild soap.

Scrubbing, warm water, and harsh dishwasher detergents remove the seasoning in the skillet that you worked so hard to achieve and make it susceptible to rust.

If, for instance, you have put it in the dishwasher, you will have to start all over with the seasoning and scrub off the rust with some good ol’ elbow grease.

As compared to aluminum, steel, and copper cookware, cast iron skillets are much less susceptible to warping due to the material that they are made with.

To gauge the indestructibility and strength of your cast iron skillet, focus on its thickness and weight. The heavier the bottom and the thicker the walls of the skillet, the less likely it is to warp.

However, even the sturdiest cast iron skillets can warp if not handled with care. Make sure to never expose them to thermal shock, which refers to sudden changes in extreme temperatures.

For instance, always avoid running a hot skillet under cold water, and simply wait for it to cool down. Also, never try to put a hot cast iron skillet in the fridge (although we can’t imagine why anyone would ever want to do that).

Up Next: Gluten-Free Brioche Buns