How To Make And Use Cinnamon Extract 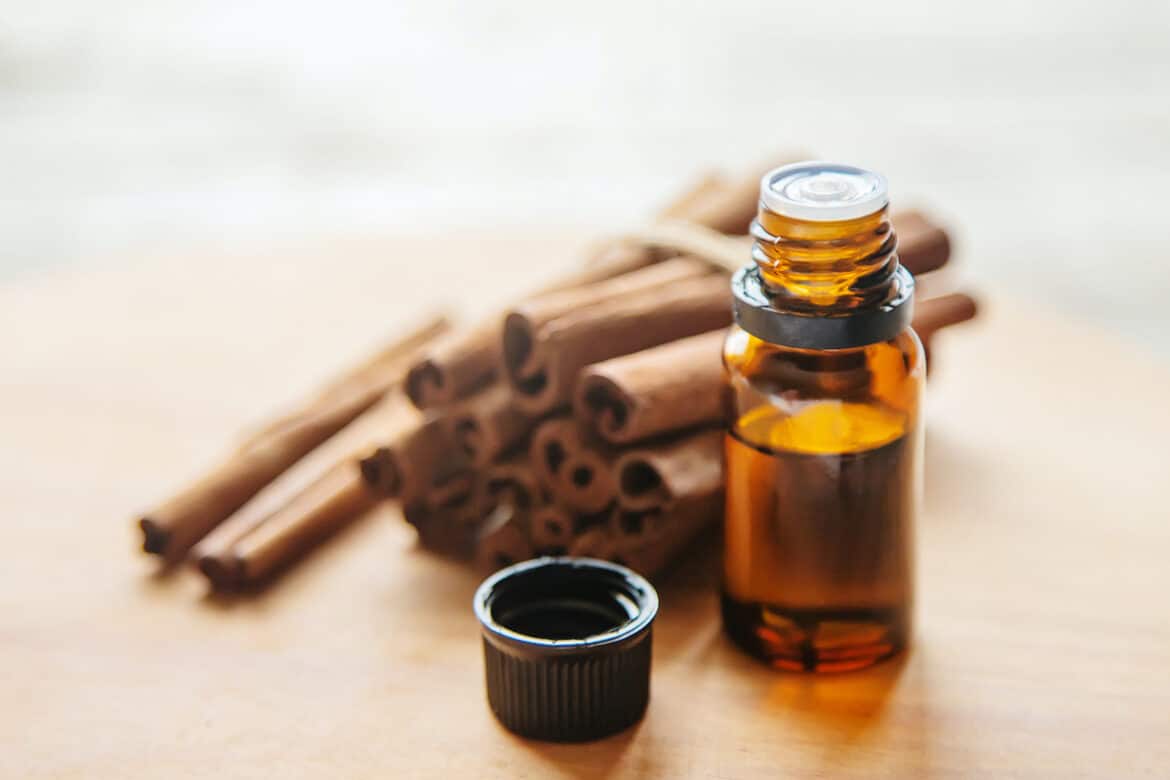 Sweet, spicy, and reminiscent of delicious food and cozy days, cinnamon is one of the most popular spices in the world, particularly in the US.

Popularly used for making cinnamon rolls and apple pie, cinnamon is also a perfect addition to beverages such as hot chocolate and coffee.

Usually available in whole or ground form, did you know that you can find it in extract form as well? Just visit your nearest supermarket and you’ll see it right there with the vanilla, almond, lemon, and mint extracts.

While you can easily find cinnamon extract at the local store, you can make an even better version at home and use it in a variety of recipes. That’s right! And it’s super easy.

So, how can you make and use cinnamon extract? You can make cinnamon extract using just two ingredients: cinnamon sticks and alcohol. It takes as little as 6 weeks and you can use it in all your favorite baked goods and beverages.

Read on to find out the ways you can make delicious cinnamon extract at home, along with its various uses and much more!

What Is Cinnamon Extract?

Cinnamon has long been valued for its anti-inflammatory, antibacterial, antimicrobial, anti-fungal, and anti-clotting properties.

And let’s not forget the delicious sweet, spicy, and strong flavor and aroma it imparts to whatever food it is added to.

All kinds of cinnamon products, including cinnamon powder and cinnamon extract, are made from cinnamon barks obtained from the Cinnamomum tree.

Not to be confused with cinnamon oil, which is obtained directly from the cinnamon bark, cinnamon extract has a long shelf life when stored properly and has a more concentrated flavor than ground cinnamon.

There are two types of cinnamon available in the market, both of which can be used to make homemade cinnamon extract.

Imported from China, India, Vietnam, and Indonesia, Cassia cinnamon is what you would normally find in the US.

It is a piece of hard bark harvested from the cinnamon tree, which is then rolled or ground and has a deep reddish-brown color.

Imported from Sri Lanka and Madagascar, Ceylon cinnamon is mostly found in Europe and Mexico, although it has started to make its way into the US.

Harvested from the delicate bark of the interior of the cinnamon tree, Ceylon has a sweet, floral aroma and is light brown in color.

How To Make Cinnamon Extract

Making cinnamon extract at home is extremely easy and calls for only two ingredients: cinnamon sticks and alcohol. Don’t worry if you don’t drink though, since the alcohol burns off in the baking process.

For best results, use fresh cinnamon sticks from a freshly opened package. If you use old ones that have been lying around in your pantry for a while, it may not give you the best cinnamon extract.

Also, avoid using cinnamon powder since the powder could be extremely difficult to sieve out after the extraction, resulting in unnecessary grit in the extract.

The second ingredient you’ll need is alcohol. It is used in almost all extracts since the alcohol pulls the flavor out of the main ingredient and also works as a preservative, making homemade extracts shelf-stable.

Use any high proof grain alcohol with a higher ABV since it results in a faster extraction rate and helps extract the flavors from dry and dense spices such as cinnamon.

While you do not require anything top-shelf, we suggest not going for the cheapest option either.

Clear, unflavored vodka is a good choice since it will give you the strongest cinnamon flavor in the extract without overpowering it with other flavors.

Here are step-by-step instructions on how to make cinnamon extract at home:

Unlike vanilla beans that you can leave in your extract indefinitely, the cinnamon extract will start to taste bitter if the cinnamon sticks are left in there for too long.

Since, for obvious reasons, you wouldn’t want your cinnamon extract to turn bitter, remove the sticks once the extract has reached the required strength.

You will be able to tell whether it is done by its smell and color—very fragrant and a lovely rich brown.

Making cinnamon extract is a very easy, albeit lengthy process. You have to leave the mixture for around a month in order to get the desired results.

There are, however, other ways that you can use to speed up the process, one of them being the sous vide method.

Sous vide refers to the process of cooking foods at an accurate temperature, and while it can do wonders for meat and vegetables, it can also be used for making all kinds of extracts, including cinnamon.

When making sous vide extracts, the flavors are extracted much faster than they would at room temperature, such as in the traditional extraction method explained above, speeding up the process from a few weeks to only a few hours.

Here are step-by-step instructions on how to make sous vide cinnamon extract:

Another way to prepare cinnamon extract at home is to make it using an electric instant pot, where it is ready to use in a single day, although you may want to let it sit for around 2 weeks for best results.

But before we continue with the recipe, there are a few safety tips that you need to follow when using an instant pot for making cinnamon extract.

If you’re unsure about whether or not to use alcohol in your device, we recommend contacting the manufacturer or using one of the other methods for making cinnamon extract.

With that out of the way, here are step-by-step instructions on how to make instant pot cinnamon extract:

How To Use Cinnamon Extract

You can use it in a variety of recipes such as:

Now that we’ve covered all the different methods of making cinnamon extract at home and how to use it, here are a few additional questions we thought you might have!

How long does cinnamon extract last?

The best way to store cinnamon extract is to keep it in a cool, dry, and dark place, away from sunlight, preferably in the pantry. Make sure to keep the jar tightly shut when not in use.

When using store-bought cinnamon extract, the package will come with a “best by” date that estimates how long the product will stay at the best quality. It is still safe to consume, though.

How can you tell if cinnamon extract has gone bad?

If stored properly, cinnamon extract can last for an indefinite period of time. However, under certain circumstances, it may go bad.

Some telltale signs include the extract losing flavor over time or developing an off odor, flavor, or appearance. In such cases, it must not be consumed and should be discarded immediately.

Can you reuse cinnamon sticks for extract?

Cinnamon sticks can be reused a couple of times before they start to lose their flavor, however, for the best quality cinnamon extract, we recommend using only fresh cinnamon sticks that are in their optimal condition.

You can reuse the cinnamon sticks for other recipes by simply washing them under cold water and allowing them to dry.

To get the most flavor, you can run a grater over the sticks to release some fresh flavor. You can do this 4-5 times before the cinnamon sticks start to lose their flavor.

What is the difference between cinnamon oil and cinnamon extract?

Cinnamon oil and cinnamon extract are two different things, although they come from the same source.

Cinnamon oil is taken directly from the bark of the cinnamon tree and is highly concentrated, about 4 times as strong as cinnamon extract.

Cinnamon extract is made by dissolving cinnamon sticks into an alcohol solution, and is far less potent than cinnamon oil, although far easier to use for cooking.

Both cinnamon oil and extract are used as flavorings. Cinnamon extract is used in cakes, cookies, pies, and ice creams, while cinnamon oil is best suited for making candy.

Since extreme high heat is required to make candy, cinnamon extract is not the best option because it causes the alcohol to evaporate quickly.

What are the different alcohol options for homemade cinnamon extract?

There are plenty of good options when it comes to choosing the best alcohol for making cinnamon extract, with each one offering its unique characteristics.

Vodka is one of the most popular choices of distilled spirits when it comes to making extracts. The better the quality of the vodka, the cleaner and smoother it is—two very important factors to consider.

The biggest advantage of using vodka is that, since it is tasteless and odorless, it allows the flavor of the cinnamon to shine through.

Rum is another great choice when it comes to making cinnamon extract. It is repeatedly distilled like vodka, is smooth and pure, and brings out the flavor from the cinnamon sticks.

If you plan on making desserts such as cakes, cookies, and ice cream, using a rum-based cinnamon extract would be the perfect choice since it adds a bit of sweetness to the recipe.

The third option is bourbon, the most popular American whiskey and a great choice for making cinnamon extract.

Like vodka, it is clean; however, it has a slightly smoky and sweet flavor that brings out the sweetness of the cinnamon without overpowering its aroma.

What are the best substitutes for cinnamon?

One of the most delicious and aromatic spices in the world, cinnamon can be used in a variety of sweet and savory dishes, as well as different kinds of drinks.

If you don’t have cinnamon extract, you can use 4 times the amount of cinnamon powder in your recipe.

But when even that isn’t an option, you can substitute it with plenty of things you can easily find on your spice rack.

Some of the best substitutes for cinnamon include nutmeg, ginger, cloves, star anise, cardamom, allspice, and pumpkin spice seasoning.

Since all these ingredients have different flavor profiles, you need to choose the right substitute depending on the recipe you need it for and whether it is sweet or savory.

Up Next: The 7 Best Substitutes For Coconut Butter

Thank U very much for the info on making cinnamon xtract May God bless you in all that U do . Keep up the good work.