Why Is My Buttercream Runny? 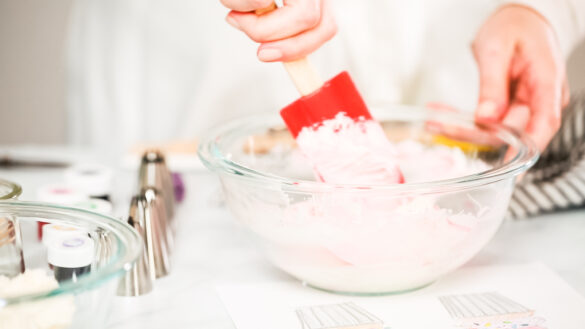 Everybody should have a buttercream frosting recipe on hand, one that you can always go to and easily tweak its flavor.

However, finding that recipe can be challenging! There can be many trials and errors that make you feel like you aren’t getting any closer to making the ultimate, fluffy buttercream frosting.

So, why does buttercream frosting become runny? The main culprit is that you’ve added too much liquid, whether by your own decision-making or a bad recipe. Another reason is that your ingredients and environment are too hot. You could also have over-mixed the frosting.

Lucky for you, we took an in-depth look at how to avoid all the potential causes of runny buttercream. We’ve even included a fun section on how to fix it completely!

What Is The Perfect Buttercream Consistency?

In a baking kitchen, buttercream is an essential ingredient to have. Arguably everybody that loves food has some type of go-to buttercream recipe. Some have one that has been passed down through the generations!

It’s important to know that no one just grabs a recipe, makes it, and it works perfectly fine. Somewhere, someone had to go through many tedious trials to figure out which recipes make the perfect buttercream frosting.

Since you’re here, you are probably that person. You tried a recipe, it came out super runny, and you aren’t sure what went wrong or how to fix it. It happens.

Characteristics Of A Good Buttercream

So what should the consistency of buttercream be? This frosting is made with fat (usually butter), powdered sugar, and a thinner (milk, cream, or water). You can also add flavoring ingredients and colorants.

First, butter is creamed to create a fluffy texture.

Then, once the powdered sugar is added, the mixture is vigorously whipped to create a fluffy frosting.

Lastly, thinner is used to help thin down and soften the consistency. Otherwise, you will over-beat the buttercream without actually thinning it down.

Buttercream is a relatively thick frosting. It has varying consistencies, but they are all still pliable. A good test is to see whether or not the frosting can make a large peak that can stand up on its own with a small curl at the tip.

This frosting should also be somewhat aerated, which gives it a fluffy and airy texture. The fluffy texture is created by beating the butter and powdered sugar.

Buttercream frosting should always be completely smooth and lump-free. A grainy frosting is not acceptable.

How Use Determines Consistency

The use is what will determine whether or not your buttercream has the right consistency. This is when many people thin down their buttercream frosting too much.

For example, a crumb layer for cakes uses a very soft buttercream frosting. That is easily created by adding some liquid to help thin the consistency.

Then, the final coating of buttercream on a cake (for decorative purposes) has to be thicker. It has to be firm and hold its shape extremely well.

For example, delicate embroidered embellishments on a cake will need a much thicker buttercream than delicate flower petals on a cupcake. Or maybe you need a frosting that will harden for cookies.

There are multiple types of buttercream that can be used differently. Check out this video from Baker Bettie on YouTube to learn more!

So What Makes Buttercream Runny?

Okay, so maybe you’re looking for a long list of reasons why your buttercream frosting is too runny.

The reality is that it’s probably too runny because you have added too many liquid ingredients — it’s the number one cause of runny frosting.

There are other, less common reasons why your frosting is trying to run away from your baked goods. Naturally, we included some great fixes for each. So, let’s get right to it!

A good recipe will always say something along the lines of “x – y tablespoons of liquid.” That’s because the environmental conditions are different every time you make the frosting, and it will require different amounts of hydration.

If you simply add the entire amount of liquid from the get-go, you are likely going to end up with runny frosting.

Another way you could have mistakenly added too much liquid is if you added a lot more than the recipe says.

Unfortunately, many people don’t properly mix the frosting between the liquid additions. Then, once the buttercream properly comes together, it is far too soft.

Everything Is Too Hot

By everything, we mean everything. It could be that your ingredients are too hot from the start, your equipment is warm, or even the general temperature of the room is too high!

Any one of these factors will cause the frosting to become soft (or softer) than it should be.

There is a reason we don’t use melted butter for buttercream frosting. Melted butter adds too much liquid and doesn’t add any structural support. The fat in the butter is what helps keep the frosting fluffy and firm in texture.

Furthermore, if your environment is very humid, you will need to add less liquid. High humidity means higher moisture levels in the air. That means that your frosting will automatically be more hydrated. So, it’s easy to make it too runny.

Over Beating The Frosting

Beating the buttercream frosting is a must, but if you over-mix the ingredients, they begin to lose their structural integrity. It ultimately deflates the structure that the ingredients have created.

The butter, which is meant to function as the stabilizer in your frosting, will soften far too much. Then, the moisture levels increase in the recipe, ultimately leading to runny buttercream.

This happens to us a lot. We think we know what we’re doing with the listed ingredients and wing it, then it comes out completely wrong. That is because each recipe is made with specific ratios, preparation, and production methods.

Some recipes don’t cream the butter, while others beat it for 10 minutes. Some recipes add the liquid and powdered sugar in batches, while others add it all at once. It’s conflicting and confusing and we just want frosting already.

The point is that each recipe is unique. The instructions are written for those specific ingredients and they won’t work the same in a different recipe.

We were always taught that it is better to prevent a ruined recipe than to try and fix it. But sometimes it’s too little too late. Now you’re left with an uber runny frosting, and you don’t know what to do.

Well, we have some tricks you can try. But, keep in mind that runny frosting is extremely difficult to fix. Many people prefer tossing the batch instead of getting it firm again.

To us, this is wasteful. We’ll always try to fix it. But sometimes you just can’t! If you’re up for the challenge, here are the best ways to fix runny frosting.

This trick is a strange fix. Most people keep adding powdered sugar.

However, if you’ve tried that, you know that you have to add a lot. And seeing as powdered sugar isn’t the cheapest ingredient in the world, that can be costly.

So instead, we decided to add 1-2 teaspoons of corn starch. It will naturally absorb a ton of liquid, but simultaneously act as an emulsifier and stabilizer (a big mouthful of words there, we know). Bottom line is that it works well.

This technique works and will always work. But, as we’ve mentioned, it requires a lot of powdered sugar, which can end up being more expensive — and sweet.

When adding the powdered sugar, make sure to sift it before adding it in small increments. We would sift it directly into the runny frosting.

If your frosting isn’t too runny, all you may need to do to fix it is chill it in the fridge for 10-20 minutes.

This will help firm up the butter, which may be all that is needed.

This technique isn’t fool-proof and won’t work in every circumstance, but there’s no harm don’t in giving it a try.

How To Make Buttercream Less Sweet

Can You Freeze Buttercream? – Step By Step