Home Foodsguy Can You Freeze Buttercream? – Step By Step
FoodsguyFreezingHow To

Can You Freeze Buttercream? – Step By Step 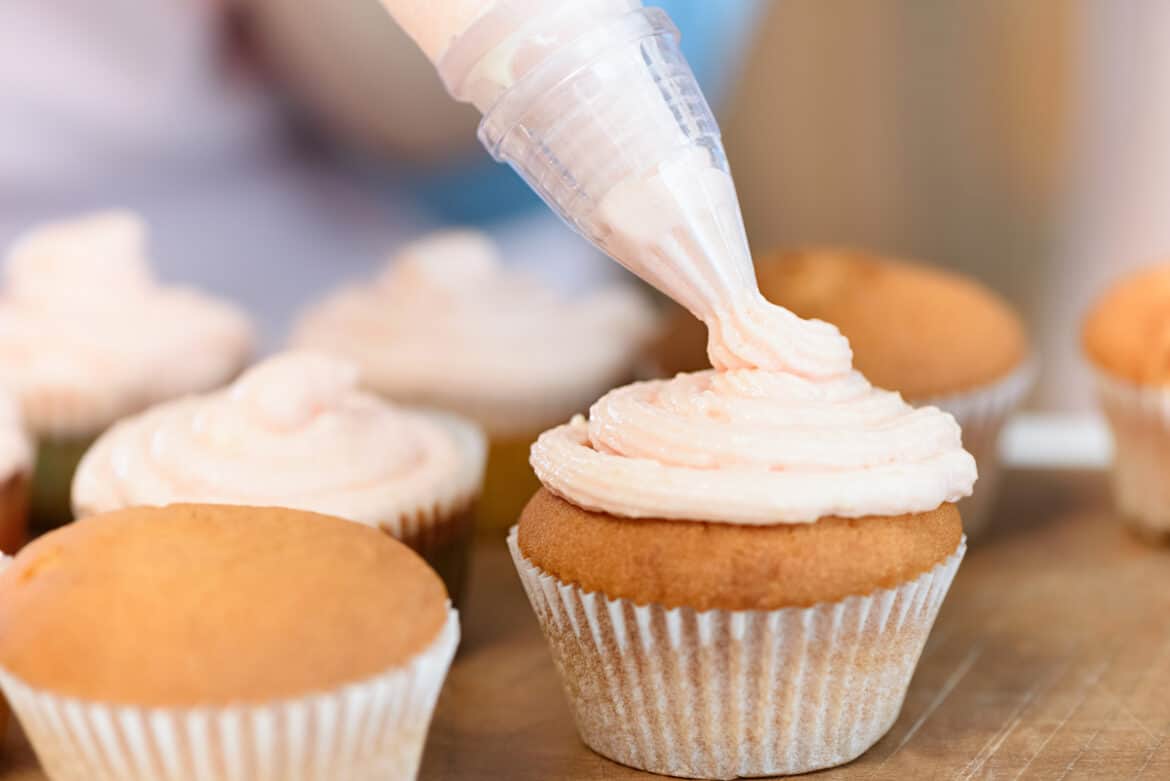 Ending up with excess buttercream is a common issue. You don’t always coordinate the amount of buttercream you make with the size of the cake or the number of cupcakes that need decoration or filling.

Can you freeze buttercream? Yes, you can freeze buttercream. It can be frozen for up to 2-3 months, no matter which recipe you’re using. Buttercream frosting, icing, cakes, and cupcakes can all be frozen, and thawing is usually a simple process.

If you have ever let excess buttercream go to waste, you will never do it again after reading this article.

There are different types of buttercream frosting, the most popular and easy one being the American buttercream.

It is made with a type of fat, such as butter, margarine or shortening, milk, and powdered sugar. Easy! Milk is often substituted for cream.

And the mixture of these simple ingredients turns into something heavenly, capable of taking any cake or cupcake to the next level.

Another variety for experienced bakers is German buttercream – buttercream made with custard.

In any case, this frosting doesn’t get too complicated, unless you decide to add fruit purees, chocolate, or other flavorings to it.

Due to its ‘clean flavor’, you can achieve all kinds of different flavors with it. In a word, buttercream is your oyster.

The true buttercream frosting is always creamy and rich. It has the perfect fluffy texture that adds the very necessary light layer to baked goods.

Can You Freeze Buttercream Frosting?

Buttercream is a versatile ingredient in a baker’s life. Not only can you add all the different colors to it and use it to decorate cakes and cupcakes but also use it as a filling.

Buttercream whisked by hand is a lot of effort and letting excess buttercream go to waste would be a shame.

Luckily, you can freeze buttercream. Freezing buttercream doesn’t affect its texture and creaminess if you defrost it right.

How to Freeze Buttercream Frosting

It is best to use buttercream while it’s fresh. If you have ended up with excess buttercream and know you won’t be using it within a week, you can freeze it.

Here is how to freeze buttercream frosting:

You can also freeze buttercream in an airtight container.

Additionally, you have to make sure that the lid of your container seals perfectly. Otherwise, the buttercream will absorb odors which will deteriorate its quality. And your baked goods certainly won’t benefit from it.

When using a container, we recommend wrapping it with a layer of food wrap just to make sure that your frosting is safe.

Tip: You can freeze smaller portions of buttercream in food wrap. Cut out a piece of food wrap, put a scoop of buttercream on the plastic wrap, roll, and twist the ends to secure the frosting in the wrap.

These small buttercream ‘bombs’ will be easy to thaw and use whenever you are in the mood for a fancier cupcake or two.

How to Thaw Buttercream Frosting

To use frozen buttercream, transfer it from the freezer into the refrigerator and let it sit there until the frosting has softened. This is a key step as drastic temperature changes will majorly affect the consistency of thawed buttercream.

It is good to place the container or bag with buttercream on a plate to avoid water leaking everywhere in the fridge.

Once the buttercream is all defrosted, take it out of the fridge and let it come to room temperature.

Another reason why it is always good to let buttercream frosting come to room temperature is that it is much easier to work with especially when you are going to use it for decoration purposes.

Do not refreeze defrosted buttercream.

Tip: Whip defrosted buttercream to restore the original texture. Do this only when the buttercream is at room temperature. Whipping buttercream that is still cold will make it grainy.

You can also use the microwave to defrost buttercream. However, you should be careful not to melt it.

Put the buttercream in the microwave for not more than 10 to 15 seconds on the Low setting. Once the frosting is slightly softened, use a whisk to defrost it further.

Large amounts if buttercream can be microwaved for a few times with intervals.

Can You Freeze Buttercream Cake?

You can freeze cakes and cupcakes with buttercream frosting.

Here is the best way to freeze buttercream cakes and cupcakes:

You can freeze buttercream cupcakes with this same method.

It is best to thaw frozen buttercream cake or cupcakes first in the fridge than at room temperature.

However, if you are in a hurry, you can take out the frozen cakes and defrost them quickly at room temperature. It will take you only a few hours until the cake is ready to be eaten.

Can You Freeze Buttercream Icing?

Frosting and icing have a few clear differences setting them apart. Frosting is fluffier than icing and much thicker. Icing is slightly runnier and has a glossy finish.

But these differences don’t refer to buttercream frosting and buttercream icing as these are technically the same thing.

Thus, you can go ahead and freeze buttercream icing even if you have made it following a particular recipe.

How Long Does Buttercream Frosting Last?

Buttercream made with the simple recipe without eggs will keep for around 14 days in the fridge. If you freeze it, you will be able to use this buttercream within 8 weeks.

Buttercream that contains egg whites will keep well for 7 to 14 days in the fridge. You can freeze it for up to 8 weeks.

Buttercream made with egg yolks, such as French and German buttercream, can be stored in the fridge for around 7 days. You can also freeze them to extend the shelf life for up to 12 weeks.

How Do You Know If Buttercream Is Bad?

Buttercream keeps well for around 2 weeks at proper temperatures. Additionally, the sugar in buttercream is like a preservative that contributes to its shelf life.

Just like with buttermilk, if your buttercream has an off-putting smell after taking it out of the fridge or thawing or has changed its color, it has most likely gone bad.

Does Homemade Buttercream Frosting Need to Be Refrigerated?

But if you want to be on the safer side, it is always good to keep buttercream in the fridge.

It is recommended to refrigerate buttercream made with egg yolks right away in order not to risk growing any bacteria in it.

Up Next: Can You Freeze Cream Cheese Frosting? – The Best Way

Can You Freeze Lobster Bisque? – The Best Way

Lasagna With Bechamel And Ricotta