How To Make Buttercream Less Sweet 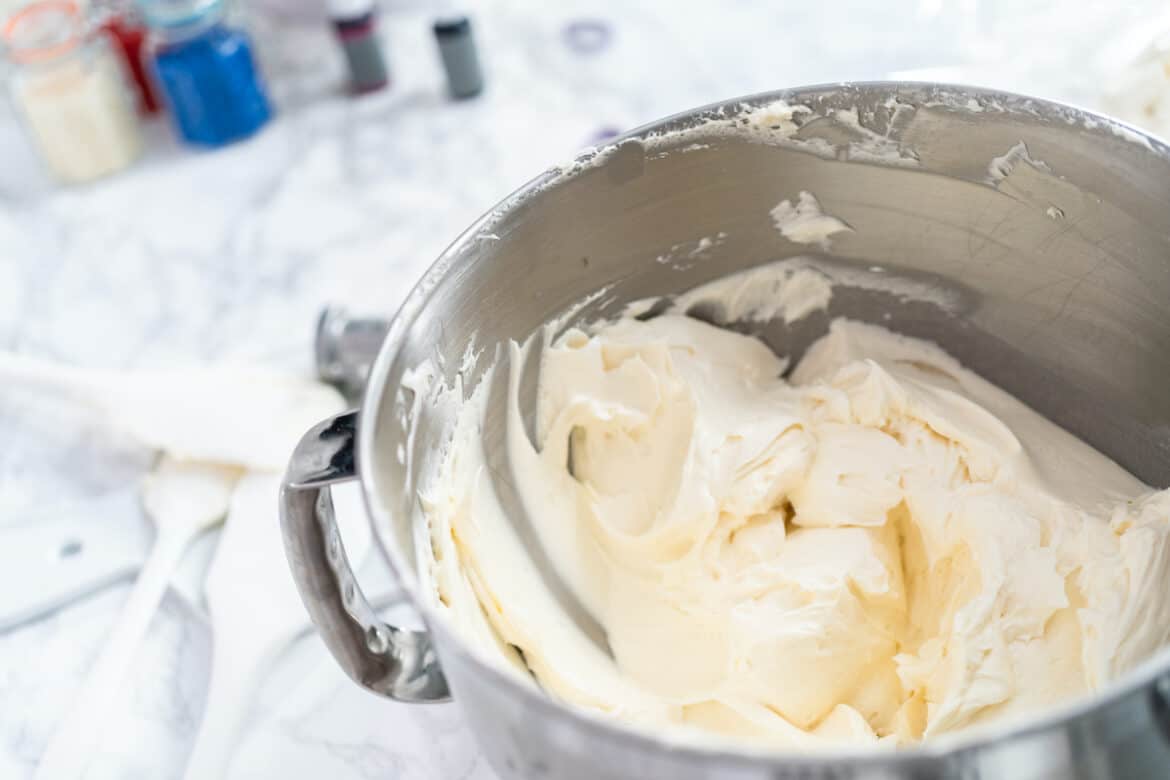 A cake without frosting? Unacceptable! Frosting can elevate the look and taste of your baked goodies, and what better frosting than good ol’ buttercream?

Buttercream is rich, creamy, and sugary, and one of the most common cake frostings in the US.

Made by mixing together a type of fat (usually butter, margarine, or shortening) with sugar, it is the perfect accompaniment for cakes, cupcakes, cookies, and the works.

It comes in several varieties, with simple American buttercream being the most popular and the kind you will most likely find on cakes at the local supermarket.

Although widely popular, buttercream can be a bit too sweet for many, and you will often find people, especially those with not much of a sweet tooth.

Read on to find out how you can make buttercream less sweet, along with some of the less sweet alternatives to top your cakes and cupcakes with!

Buttercream frosting is made from butter and a sweetener and is a great topping for cakes and other sweet treats.

There are several different types of buttercream frosting, with simple American buttercream being the most popular variety used in the country.

American buttercream has a light, fluffy texture and is made by beating butter and icing sugar at a high speed.

The icing sugar gives it more structure and helps it stay stiff enough for piping. However, since it is used in such large quantities, it can often make the buttercream too sweet.

You might think that by using less icing sugar, you can make it less sweet, but although that may do the trick, it will also affect the structure and hold of the buttercream.

Luckily, there are other easy ways to make buttercream less sweet, without compromising its structure. Here’s how!

Since removing or reducing sugar is not the most viable option, you can try increasing the amount of butter you put in the buttercream.

Buttercream is basically fat mixed with sugar; therefore, adding a bit of extra fat to the original frosting will dilute the amount of sugar and make it taste less sweet.

Add a tablespoon or two of softened butter into the buttercream and mix it at high speed until it is well incorporated. You may add more if need be. For a more neutral taste, you can try adding shortening instead.

Adding salt is probably the oldest trick in the book to balance out the amount of sugar present in any recipe, including buttercream frosting.

This is an incredibly simple technique for making your buttercream less sweet without altering its flavor and texture too much.

It will still taste sweet, but it won’t be as overpowering. Instead of using salt, you may even opt for salted butter.

You can also try adding some lemon juice to the frosting, especially if you are pairing the buttercream frosting with a citrus cake.

Not only will it help cut down the sweetness but also give the buttercream a nice kick.

To get the most perfectly balanced buttercream frosting, add 1/8th of a teaspoon of salt and 1 teaspoon of lemon juice for 4 cups of icing sugar.

With this method, you are not actually reducing the amount of sugar in your buttercream, but using an additional flavor to distract from the sweetness.

The flavor will help balance out the extreme sweetness from the icing sugar, and it can be anything according to your liking, such as extracts or alcohol.

You may also use dark chocolate, although it will work only if you are making a chocolate buttercream frosting.

Since dark chocolate carries a slightly bitter taste, it easily balances out the sugar and makes the buttercream frosting more palatable.

In addition to that, since, unlike butter, it is solid at room temperature, chocolate will make the buttercream smoother without compromising its hold and structure.

As mentioned earlier, there are several different options available for buttercream, many of which are much less sweet than classic American buttercream.

Therefore, if you are looking for a less sweet option, you can try one of the following equally delicious buttercream alternatives:

More complex to make as compared to American buttercream, ermine buttercream gets its structure from flour and milk without having to use too much sugar.

Both meringue buttercreams are made using sugar, cooked egg whites, and butter, but with slightly different techniques.

From this point onward, the steps for both the meringues are the same.

Once they have cooled down completely and are at room temperature, start adding softened butter into the meringue 1 tablespoon at a time and beat it until it is well-combined.

The addition of egg whites gives the meringues a nice marshmallow-like texture, and the absence of icing sugar makes them less sweet.

A classic flavor pairing for so many baked goods, cream cheese buttercream adds both a tangy flavor and extra creaminess to favorites such as red velvet cakes and carrot cakes.

Traditional cream cheese buttercream is made using cream cheese, butter, and icing sugar, and the tanginess from the cream cheese helps balance out the sweetness.

You may use condensed milk instead of icing sugar to make it milkier, silkier, and even less sweet. Another option is to add a bit of dark chocolate and have yourself some delicious chocolate cream cheese buttercream.

Now that you know how to make buttercream less sweet and some of the best less sweet buttercream alternatives, here are a few additional questions we thought you might have!

How can you make chocolate frosting less sweet?

Chocolate frosting is, hands down, one of the most popular and delicious frostings out there. For times when you feel it is too sweet for your liking, you can make it less sweet by adding more cocoa or a bit of sour cream to the frosting.

An important thing to consider is the type of chocolate you use. If you are using melted chocolate, you have unsweetened, semi-sweet, and sweet chocolate to choose from.

It is always best to use baking chocolate so that you can add the appropriate amount of sugar according to your preference.

You may also combine some cream cheese with your chocolate frosting, making it creamier and less sweet without any overpowering flavors or sweetness.

How can you fix gritty buttercream?

The perfect buttercream frosting has a light, fluffy, and smooth texture. However, sometimes you may end up with grainy or gritty buttercream due to the sugar not melting properly.

To always get the right texture and consistency, make sure to sift your icing sugar to remove any lumps. This is particularly important if you are using an opened bag of sugar that has been kept in a humid environment.

To fix grainy and gritty buttercream, you can try adding some liquid to help melt the sugar or leave the buttercream out for a few hours at room temperature.

When you’re ready to use it, beat it until it takes on a fluffy texture again.

Up Next: How Long Are English Muffins Good For?

How Long Are English Muffins Good For?