How To Make Palo Azul Tea 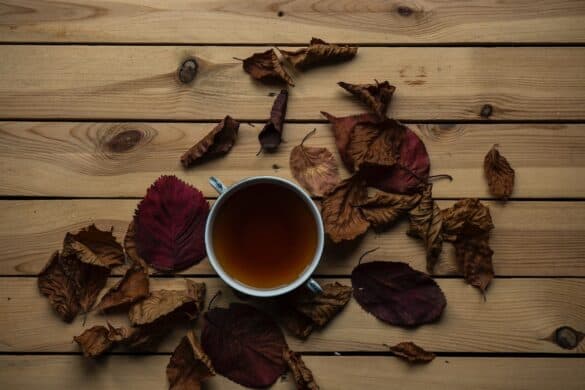 Nothing quite beats a lovely cup of tea! These days, many of us are looking for healthy tea options, and you really can’t get better than Palo Azul tea.

If you’re a fan of this flavorsome detoxifying hot drink, you might be wondering if you can make it at home?

So, how do you make Palo Azul tea? This unique hot drink is made by boiling wood chips from the bark of the Palo Azul plant. The tea can then be enjoyed either hot or cold, along with all the health benefits it brings.

Want to try making Palo Azul tea but not sure where to start? We’re here to help with the ultimate guide to this healthy drink, plus a step-by-step guide on how to make it!

What Is Palo Azul Tea?

Palo Azul tea is a herbal tea. Herbal teas, also known as tonics or tisanes, normally do not contain any caffeine.

Unlike coffee and traditional tea, herbal teas are enjoyed for their pleasant and refreshing flavor, as well as their health benefits.

Palo Azul tea is prepared using the bark of the Palo Azul plant. This is a type of plant known as kidneywood and is thought to have many benefits.

The use of Palo Azul in herbal medicine in South America dates back thousands of years, and recently it has increased in popularity around the world.

This healthy plant bark was first used by indigenous people in Central and South America. The Aztecs called this miracle drink “snake water” and used it as a remedy for multiple diseases and disorders.

Spanish missionaries were introduced to Palo Azul tea, which most likely led to it being dispersed around the world

If you’re used to herbal teas such as chamomile and mint, then you might find that Palo Azul tea is a bit mild in comparison! However, fans of this herbal tonic say that the taste is like no other, and rave about the delicate flavor.

So, what exactly does Palo Azul tea taste like? Its taste is certainly subtle, but it has very slight earthy tones to it.

Fans of this tea describe the flavor as robust and uplifting, with an intricate and deep taste.

It can be enjoyed on its own, but also makes the perfect base for other ingredients. The most common combination is Palo Azul tea flavored with cinnamon, lemon, and ginger.

What Are The Benefits Of Palo Azul Tea?

Palo Azul tea is pleasant enough to drink just for the mild and subtle flavor, but most people reach for this herbal tincture for the multiple health benefits.

Palo Azul tea is a medicinal detoxifying drink, which has a positive effect on many bodily functions.

The ancient Aztecs discovered the detoxifying properties of Palo Azul bark thousands of years ago, and it is still used for this purpose to this day.

It is thought to reduce bodily toxins, which helps to minimize pressure on the kidneys and pancreas.

Palo Azul tea is thought to help to balance blood glucose levels, which can reduce the risk of diabetes. The antioxidant properties of Palo Azul tea can also help protect against liver disease, heart diseases, and strokes.

Palo Azul tea can help to reduce inflammation and is often used for painful conditions such as arthritis and gout. It reduces pain and discomfort and helps to eliminate swelling.

How Is Palo Azul Tea Made?

Making Palo Azul tea is not a quick process, but it’s one of those satisfying rituals which many people get enjoyment from! Taking the time to prepare a delicious and healthy herbal drink is one of the many pleasures in life.

Unlike many herbal teas, the Palo Azul bark takes a long time to release its nutritious benefits into the water.

This isn’t a tea where you can pour on hot water and drink it a few minutes later! Palo Azul tea takes at least 1 hour to brew, and it must remain boiling throughout this time.

Luckily, you can make a large batch of Palo Azul tea, and enjoy the rest at your leisure. So you don’t need to spend an hour every day making up a mug of detoxifying tea!

Simply make enough for a week’s supply of tea, keeping it in a jug in the refrigerator until you are ready to drink it.

Here is the ultimate guide to making the perfect Palo Azul tea:

How To Serve Palo Azul Tea

Traditionally, Palo Azul tea is served hot, but many people also enjoy it cold. Either way, it can be enjoyed as a stand-alone drink, but the mild flavor also carries other ingredients well.

Palo Azul tea is often served with some sort of sweetener to enhance the delicate flavor. You can use sugar, but if you are trying to be healthy then a little bit of honey or a squeeze of citrus juice will also do the trick.

If you want a bit of a kick to your hot drink, try adding something a bit spicier. The mild taste of Palo Azul tea will carry strong flavors such as cayenne pepper, ginger, cinnamon, and turmeric.

Many of these have additional medicinal benefits, giving you the ultimate super drink!

Palo Azul tea has many health benefits, and these can be enhanced by mixing it with other herbal teas. Here are some great combinations to help soothe and ease uncomfortable disorders:

However, you don’t have to drink your Palo Asul as a hot beverage! The subtle flavor of this delicate tea makes a refreshing cold drink. So, if you want your daily hit of detox tea, simply pour a glass from the fridge every day!

You can still sweeten and mix your cold tea with other herbal beverages, so have a play and find out what your favorite way to drink Palo Azul tea is!

Now that we’ve looked at how to make Palo Azul tea, let’s take a look at a few related questions on the subject!

With its powerful detoxifying properties, you need to be sure that Palo Azul tea is safe to drink.

Luckily, there are no known side effects linked to drinking this tea, and experts have rated it as safe to drink. It is considered safe to drink 1 glass or cup of Palo Azul tea daily.

Drinking an herbal tincture such as Palo Azul tea is a safe and effective way to keep your body systems healthy, and can help to offset the potential damage caused by other medications.

However, if you are undergoing medical treatment, it is advisable to speak to your medical team before adding herbal remedies to your treatment regime.

Palo Azul tea has not been verified as safe for consumption by pregnant women. If you are pregnant or planning a pregnancy, it would be best to give this detox tea a miss.

The word ‘azul’ has Arabic origins and means blue in many languages including Spanish and Portuguese.

Palo Azul tea gets its name from the delicate blue hue which can be found when it is brewed. In fact, this beautiful opalescent, blue-tinged water is a traditional gift, often given to royalty!

So, does this mean that your Palo Azul tea will be blue? Well, don’t expect a bright blue drink like a children’s pop drink!

At best, your Palo Azul tea will have a light blue tinge, which adds a hint of color to the water rather than turning it blue.

The depth of color of Palo Azul tea depends on how long it has been brewed. To get a darker color, you must boil it for at least 1 hour.

For the full effect, serve the hot tea in a clear glass coffee cup, to allow the light to shine through. Don’t be disappointed if your drink isn’t blue though, as you will still have the great flavor and amazing nutritional benefits!