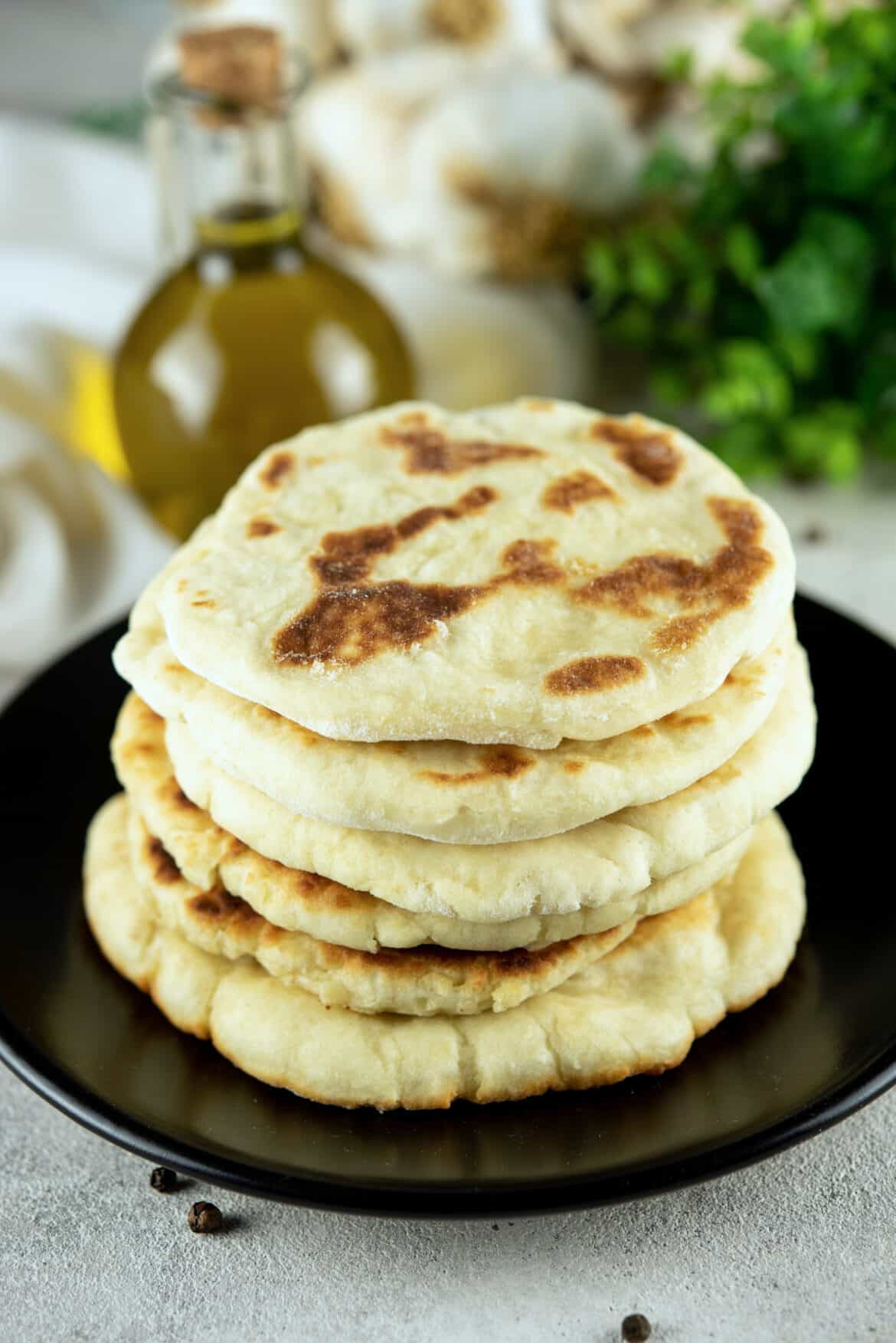 If you are unfamiliar with Naan bread, it is a great time to meet each other.

Naan bread is a traditional Indian bread. It is a type of flatbread that you make in a skillet. It is not a just flatbread, but also a soft and pliable type of bread.

This Naan recipe is quick and easy to make and requires no yogurt. This recipe is probably my favorite recipe for the Naan bread as it is not only quick but super delicious.

Sometimes people mix pita and Naan bread, but although both being types of flatbread, they are completely different. Pita bread is cooked in an extremely hot pan or oven and has a characteristic air pocket in the middle.

Naan bread is cooked over medium-high heat on a skillet and it has more air bubbles than pita bread, which has one big giant bubble.

Naan bread can be served with any type of meal. You can eat Naan along with soups, gravy, meat dishes, or simply used for sandwiches.

Can You Make Naan Bread Without Yogurt?

Yes, you can make the Naan bread without yogurt. The yogurt is used to make the bread soft and fluff, but making Naan bread with yeast and allowing it to raise will give the same results.

Yogurt of any type is not mandatory in this recipe. Yeast will do the trick and turn the Naan dough into the softest and most bubbly bread.

How Is Naan Bread Traditionally Made?

First, you want to make the dough by combining the yeast and flour together. Knead the dough by hands or using a stand mixer with a dough hooks attached. Divide the dough into six to eight portions and let it raise for at least 1 hour.

Once the dough is made, the bread itself is baked in a very hot clay tandoori oven, with charcoal or wood. Of course, we do not have a tandoori oven so the next best thing is a heated skillet.

You can use either a plain non-stick skillet or a cast-iron skillet (this one that you can pick up on Amazon is by far my favorite, and perfect for making Naan).

The baked bread will have distinguished brown spots on top. The spots are actually air pockets and a great indicator when the Naan bread is done.

Once it’s cooked, you can serve the Naan bread with olive oil, ghee, or butter.

How To Serve Naan

You can make Naan bread plain or with herbs or spices. Although Naan bread is not traditionally made with spices, you can always feel free to adjust this recipe to your personal taste. After all, you’re the one eating it!

You can use some of the traditional Indian spices such as turmeric or a pinch of curry powder, or choose a variety of herbs such as thyme, oregano or basil.

For some extra crunch, you can sprinkle the Naan bread with black cumin seeds.

Now let’s get into our yogurt-less Naan recipe!

How To Make Naan Without Yogurt

In a mixing bowl, combine water, sugar, and yeast. Cover and let it stand for 5 minutes at a warm place.

In a large mixing bowl, combine flour, milk, lemon juice, olive oil, and the yeast mixture. Stir to combine until dough comes together.

Divide the dough into six equal pieces. Roll each piece in a ball. Arrange the balls on a plate and cover with a damp cloth.

Let the dough rise for 1 hour.

Heat a large skillet over a medium-high heat.

Roll the dough balls to a 1/4-inch thickness and place into the heated skillet. Cook the Naan bread until it starts to bubble.

Flip the bread and brush with some olive oil. Cook the bread on the other side.

Up Next: The Best Ways To Reheat Naan Bread