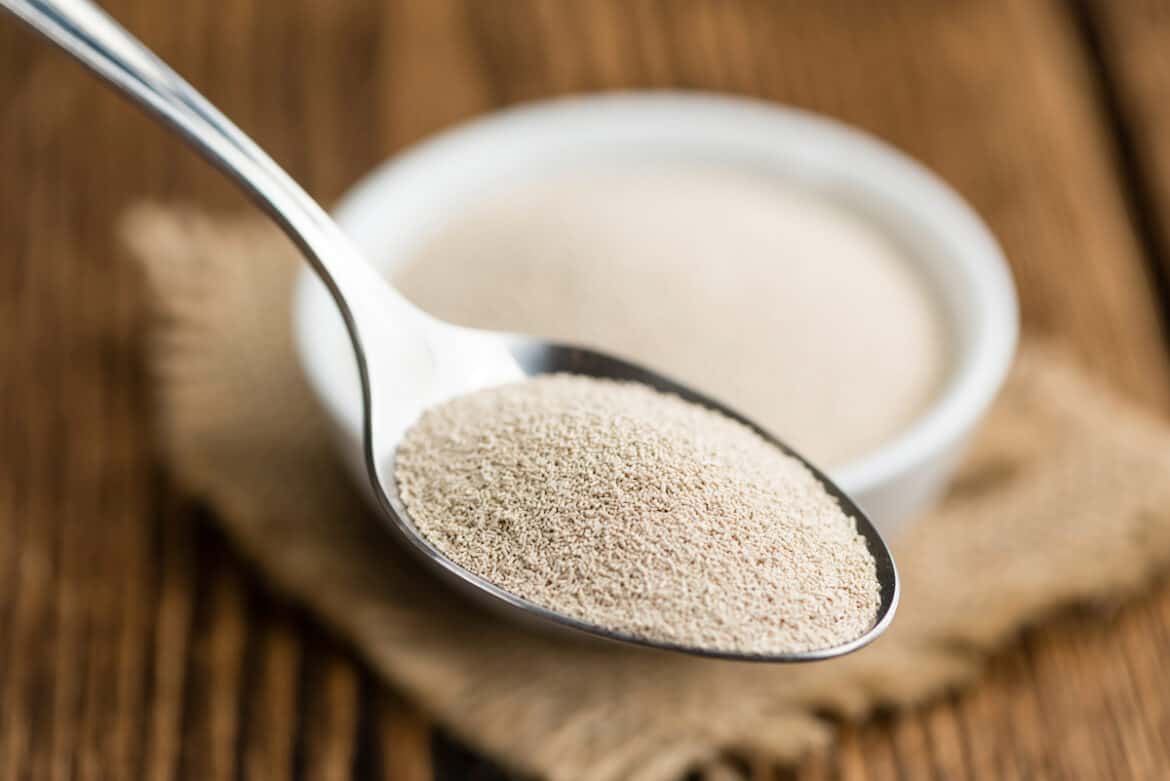 Whether you’re a professional baker or have recently tried your hand at baking, you must know how important yeast is to make fresh and delicious bread that smells like heaven!

Yeast is a microorganism that is present everywhere, and its main purpose is to break things down in a process known as fermentation.

It plays a vital role in bread making where it is used to leaven bread and give it a light, sponge-like texture, along with enhancing its flavor, texture, and aroma.

There are several types of yeast available when it comes to baking, to be used in recipes and as nutritional supplements, but for the uninitiated ones, it might be a bit confusing to know when to use which one.

Two common types of yeast that often come up in this discussion are active dry yeast and brewer’s yeast. While the two share a common strain, there are some significant differences between them that you must know before using them.

Read on to find out more about their similarities and differences, the different types of active dry yeast and brewer’s yeast, their uses, and whether they can be substituted for each other:

Before we discuss active dry yeast and brewer’s yeast, it might be helpful to have a better understanding of yeast, to begin with.

Yeast is a type of fungus that can be found anywhere and everywhere in the world. It is a very common single-celled form of life that can be found on trees, plants, in soil, and even inside the stomachs of both humans and animals.

It is an asexual form of life that keeps reproducing very fast under the right circumstances and leaves behind CO2 and alcohol.

For beer brewing, both CO2 and alcohol are extremely necessary since they are directly responsible for making the beverages alcoholic.

On the other hand, bakers are mostly interested in just the CO2 part for baking bread since that is what gives the final product its light, airy texture and delicious flavor.

What Is Brewer’s Yeast?

Brewer’s yeast, also known as beer yeast, is a type of slow-rising yeast that is used for beer brewing. It is made from a one-celled fungus called Saccharomyces cerevisiae (S. cerevisiae) and is also used as a nutritional supplement.

It is highly abundant in chromium that helps maintain normal blood sugar levels and is also a great source of B vitamins.

It is bitter and particularly effective in brewing beer and wine, where it produces tiny bubbles that help with the fermentation process.

Brewer’s yeast may also be used to make bread; however, its bitter flavor might be unappealing to some.

What Is Active Dry Yeast?

Active dry yeast is a partially dehydrated, granular type of baker’s yeast that is used to make fresh bread, cakes, and pastries.

You can find multiple types of baker’s yeast, such as fresh, liquid, instant, and active dry in the supermarket, out of which, active dry yeast is one of the most popular and commonly used.

It is used as a primary leavening agent for producing bread which, when mixed in sugar, releases CO2 that helps the dough rise and expand.

Active dry yeast is sold in a prepackaged form in supermarkets and it provides a light, airy texture to whatever it is added to, in addition to adding a wheat-y, nutty flavor.

It was developed during World War II so that the US army could easily bake bread without having to refrigerate fresh yeast, which already has a pretty limited life.

As opposed to instant yeast that you can add to your dough as is, active dry yeast needs to be proofed.

To do this, you need to dissolve it in lukewarm water, milk, or beer and wait for it to bloom. You may also add sugar or honey to the mix at this point to feed the yeast.

After about 5-10 minutes, a thin layer of fuzzy bubbles will begin to form on top of the liquid, indicating that the yeast is still alive.

Once the active dry yeast has been rehydrated, you may continue to follow your baking recipe and mix the rest of the dry and wet ingredients with the yeast.

Both brewer’s yeast and active dry yeast are products of a single-celled fungus called Saccharomyces cerevisiae that converts sugar and starch into CO2 bubbles and alcohol when used in food.

The main difference between the two is that while brewer’s yeast makes vast amounts of both CO2and alcohol, baker’s yeast (such as active dry yeast) produces a lot of CO2 and negligible amounts of alcohol.

Brewer’s yeast has a huge role in beer making and was designed specifically to produce high-quality alcohol. In fact, a main part of brewing beer is preparing the ingredients and creating a suitable environment where the yeast can thrive.

Active dry yeast, on the other hand, feeds on the starch produced by the flour to make CO2 bubbles that cause the dough to rise. It can be used to leaven all types of bread and baked goodies such as croissants, brioche, and coffee cake.

Active dry yeast is mainly used for the rising effect from the CO2 and, unlike brewer’s yeast, it does not produce any ethanol.

Can Active Dry Yeast And Brewer’s Yeast Be Substituted For Each Other?

Whether you plan on using brewer’s yeast for baking bread or baker’s yeast for making beer, make sure to substitute them with the correct equivalent amount.

The only issue would be that the bitterness of the brewer’s yeast might change the flavor of your bread or baked good, making it slightly bitter.

Similarly, since active dry yeast isn’t as zesty as brewer’s yeast, using it to make beer might not give it the distinct flavor that you’re accustomed to.

Make sure to not use lager yeast to make bread since it takes too long to generate enough CO2. Use ale yeast instead since it meets the requirements for both bread and beer making.

Also, if you are looking to make bread and beer with the same kind of yeast, make sure you use the active version and not the fresh and liquid forms.

Now that we’ve discussed active dry yeast and brewer’s yeast, how they’re different from one another, and whether they can be substituted with each other, here are a few additional questions we thought you might have!

What are the similarities between active dry yeast and brewer’s yeast?

Both active dry yeast and brewer’s yeast are strains of a single-celled fungus called Saccharomyces cerevisiae that convert sugars and starches into CO2 and alcohol.

Although brewer’s yeast is used mainly for making beer and active dry yeast is used to make bread and other baked goods, you can substitute one for the other in most recipes.

Can you use brewer’s yeast to make bread?

Yes, you can! Just make sure to use ale yeast and follow the same instructions that the recipe calls for.

Proof the ale yeast at 90°F with some flour or sugar and wait for 5-10 minutes for the mixture to start foaming and bubbling.

Once that is done, you can add the liquid to the dough and start kneading it to incorporate everything.

For instance, if the recipe calls for 1/2 ounce of active dry yeast, use 1 ounce of the brewer’s yeast.

Can you freeze fresh yeast?

Yeast is killed off at very high temperatures; however, it remains relatively unaffected when frozen.

You can easily freeze blocks of fresh yeast to use at a later date, up to 2 years, without worrying about it affecting the texture and flavor of your bread.

To freeze it, break it into smaller chunks, wrap them properly, bag them into a freezer-safe bag, and place them in the freezer.

Up Next: Baking Vs Cooking – What’s The Difference?

Baking Vs Cooking – What’s The Difference?