Can You Put Milk In A Kettle? 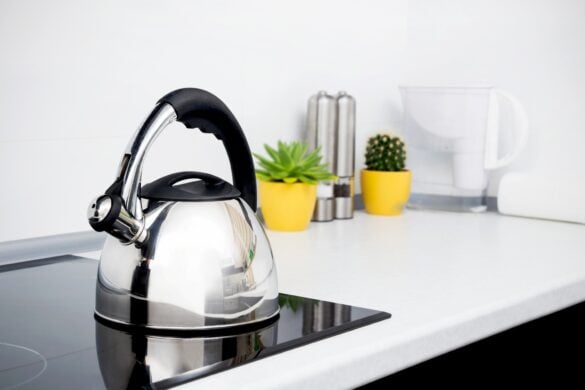 Boiling milk is great for making hot chocolate or other warm beverages, but actually boiling milk can be a little bit tricky.

Yes, you can boil milk on the stove, but this can take a little bit longer, and depending on the saucepan you are using, the milk might have a burned flavor.

One option people consider to boil milk is to use a kettle, but this might not always be the best idea.

Can you put milk in a kettle? While you can put milk in a kettle to boil it and there is a chance that you will end up with boiled milk, there are also various risks involved with doing this, such as the milk boiling over, burning, leaving a residue, and being more difficult to clean than water.

Are Kettles Able To Boil Milk?

There really isn’t a straightforward answer as to whether kettles are able to boil milk, because while most are capable of boiling milk, they were definitely not designed to do so.

Kettles are designed to boil and heat water (particularly electric kettles) and boiling anything other than water in a kettle can ruin its parts and cause it to malfunction or lose power over time.

So, you can boil milk in a kettle, but it is definitely not something that the kettle companies will recommend that you do.

The Risks Of Boiling Milk In A Kettle

As mentioned above, kettles are designed for boiling and heating water — boiling anything else comes with risks.

Here are the main concerns, and the main risks that come with boiling milk in a kettle.

Milk Is Likely To Spill Over

Milk does not evaporate as easily as water does, and the fast evaporation of water, or its turning into steam, is what prevents it from spilling over in a kettle.

When you boil milk in a kettle, it does not evaporate fast enough, and that means that the milk is very likely to boil out of the kettle, overflowing onto the kettle as well as the cooktop or counter.

This can be dangerous for a few reasons — you might burn yourself with overflowing milk, and the milk might get into areas of the kettle which (if electric) will short circuit when wet, and all-in-all will be a pain to clean.

It Can Leave Residue In The Kettle

Water is a fairly simple liquid, but milk is not. It is almost guaranteed that the milk will leave behind a sticky film in the kettle, as the protein and fat will stick to the sides of the kettle even if it is not boiled.

It can be really difficult to clean the inside of a kettle if this happens, but it can be made even more difficult to clean if the milk leaves residue in the nooks and smaller areas of the kettle, which are not easily accessible.

This residue might even cause the kettle to malfunction and underperform. More modern kettles might also not be able to perform all of the required functions if the milk leaves fat and protein clogged in sensors.

Milk Could Burn Instead Of Boil

Electric kettles have sensors that tell them when to switch off once the water has reached boiling temperature. When you boil milk in a kettle, it could cause these temperature sensors to not work properly.

A kettle might also work by switching off when steam reaches the lid, and as explained, milk does not cause steam the way that water does.

In both of these cases, the milk could cause the sensors to malfunction, and then the kettle will not switch off once the milk has reached boiling temperature.

Due to this, the milk will then burn — this could do some serious damage to the kettle, and your milk will be ruined. It will be an absolute nightmare trying to clean up burned milk from the inside of the kettle as well.

The Kettle Could Smell And Be Unhygienic

Milk, as a dairy product, is perishable. The fat and residue it leaves behind can also start to smell after time, and bacteria might even begin to grow.

If you boil milk in a kettle, you will find that it is really hard to clean out from the inside. This milk could then develop a really bad odor over time, and any water you boil in the kettle after this could hold onto this unpleasant odor.

There is also a risk that you could become sick from drinking anything boiled in the kettle afterward, especially if there has been an increase in bacteria growth in the kettle due to the leftover milk.

How To Boil Milk In A Kettle

If you are absolutely set on boiling milk in a kettle, then it is worth knowing how to do so in a way that poses the least risk to your kettle, and which will give you properly heated milk that isn’t burned.

Here is the best way to boil milk in a kettle:

Try not to leave the kettle to boil fully and switch off on its own, as the milk might cause the automatic function to not work. You must watch for the milk to be heated up and switch it off yourself before the milk begins to burn.

How Do You Clean A Kettle After Boiling Milk?

It is essential to clean the kettle after you have used it to boil milk. Leaving it will only ruin your kettle and cause an unpleasant odor.

There isn’t anything fancy you need to clean a kettle after boiling milk, and some household pantry items can work great.

When you have poured all of the milk out of the kettle, rinse it with water twice. Then, make a mix of water and white wine vinegar, mixing them in equal portions. Fill the kettle with this mixture, up to ¾ full.

Boil this solution and then leave it to sit in the kettle for up to 20 minutes, unplugging the kettle when doing so.

Pour the vinegar and water solution out and rinse the kettle.

You might have to repeat this process with new vinegar and water if there is quite a build-up of residue inside the kettle.

So, Should You Put Milk In A Kettle?

You can put milk in a kettle and boil it, but it is recommended that you do not. The milk might overflow and spill out of the kettle and (if electric) it could destroy the kettle’s element and short circuit it.

The milk will also likely leave behind residue in the kettle, which could cause a bad odor over time, especially if it is not cleaned properly.

If you are going to boil milk in a kettle, then follow the above guidelines on how to do so properly, and how to thoroughly clean the kettle after doing so.

What is the best way to boil milk?

A good way to boil milk is to heat it in a milk pot or saucepan on the stove over medium heat.

It is best to stir the milk as it heats to keep the water, fat, carbs, and proteins from separating.

It is also best to not allow the milk to come to a complete boil, and when you notice bubbles, you should turn the heat off.

You could also use a milk steamer or milk frother, or simply heat your milk in the microwave, but it isn’t as easy to stir the milk using these methods.

Will milk burn if you boil it?

If milk boils too quickly, then there is a very good chance that it might scorch at the bottom and burn, which can give it an unpleasant taste.

Slow and steady is best for boiling milk, and turning off the heat before it reaches a full boil.

For our visual learners, here’s a helpful video from Food How on YouTube on how to boil milk!

Milk Steamer Vs Milk Frother – How To Tell The Difference

Left Milk Out Overnight – Is It Safe?

Can You Put Milk In A Keurig?

Can You Microwave Milk?

Can You Freeze Olives?