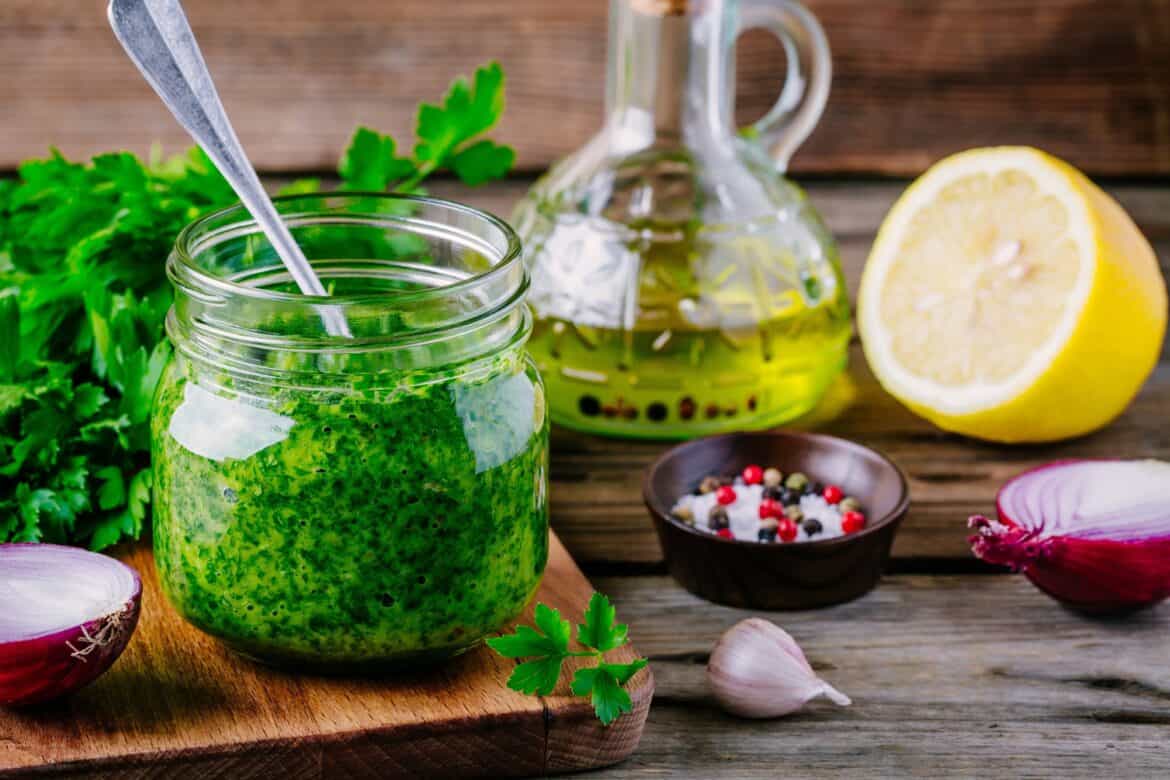 If you’re a fan of chimichurri sauce, you’ll always have a batch of this zingy marinade at hand!

Whether you prefer it homemade or store-bought, chimichurri sauce can transform a steak dinner into something magical.

But how long does chimichurri last? Store-bought chimichurri sauce is shelf-stable — if unopened, it can be stored for 6 months in a cool, dry place. Once opened, chimichurri sauce will last 3 weeks in the refrigerator. Homemade chimichurri does not contain any preservatives and should be stored in the fridge and eaten within 7 days.

Want to make sure you always have a fresh supply of chimichurri sauce for your steak dinners? We have got all the answers and more for you!

We will take a look at how long chimichurri lasts as well as give you some tips on the best way to store this delicious, herby marinade.

Chimichurri sauce originates from Argentina, where is used as a marinade and flavoring.

The popularity of this source is spread around the world and many of us have now enjoyed a chimichurri steak in our favorite grill house.

Chimichurri is an uncooked sauce, and the predominant ingredient is chopped fresh parsley. This is combined with other fresh herbs such as oregano and cilantro, as well as garlic, olive oil, red wine vinegar, and red pepper flakes.

It’s hard to describe the flavor of chimichurri — it is quite similar to pesto, but with a hint of spiciness. It brings an intense, bright freshness to dishes, with a distinctively herby flavor.

Traditionally, chimichurri is used as both a marinade and a sauce for grilled steak. The meat is basted with the sauce as it cooks, and again just before it is served.

Modern recipes have adopted chimichurri sauce to be used in many different ways.

It can be used as a marinade for fish, chicken, and lamb, or added to cooked pasta in the same way as pesto. It is also a popular complementary sauce to other grilled meats, such as sausages or ribs.

A fresh batch of chimichurri is relatively easy to whip up at home, but you also have the option of buying a pre-made bottle or jar of sauce from the grocery store.

However, how long chimichurri will last depends on whether you have made it yourself or used a commercially produced variety.

Homemade chimichurri will have a shorter shelf life, as it is made using only fresh ingredients.

However, the unusual thing about chimichurri sauce is that it is considered preferable to allow it to age for a short period before using it. This allows the ingredients to ferment together, creating the unique flavor we know and love.

In the short term, the vinegar in homemade chimichurri will help to preserve it.

Once you’ve made a fresh batch of chimichurri sauce, it should last for around one week in the refrigerator. Chances are that you will have used it all long before this though!

Store-bought chimichurri sauce is sold in jars or bottles and has a longer shelf life. When unopened, it is shelf stable and can be safely stored at room temperature.

The best-before date on unopened store-bought chimichurri sauce is normally around six months after the date of purchase.

What Is The Best Way To Store Chimichurri?

Unopened bottles of chimichurri sauce are normally shelf stable and can be stored on the pantry shelf at room temperature. This should normally be a cool, dark place away from fluctuating temperatures and bright lights.

Once you’ve opened a bottle of store-bought chimichurri sauce, it needs to be refrigerated.

You can keep it in its original container or decant it into something smaller if that is more convenient. Make sure the bottle or jar is tightly sealed with a secure lid to prevent air and bacteria from contaminating the sauce.

Homemade chimichurri sauce should be decanted into a container with an airtight lid.

Remember, this sauce contains vinegar and plenty of pungent herbs, so it may taint your precious plastic Tupperware! A better choice would be a glass jar with a tightly fitting lid.

Remember to label the jar with the date the sauce was made. This will help you ensure that it is all eaten before it goes past its best.

How To Tell If Chimichurri Has Gone Bad

Chimichurri sauce is an interesting concept as it is made with fresh ingredients, but the lifespan of these is extended by gently fermenting them in vinegar.

This means that a batch of chimichurri sauce will stay fresh for far longer than a bunch of freshly picked herbs.

Historically, this sauce was intended to be consumed over several days.

In fact, some people will tell you that chimichurri sauce tastes at its best 1-2 days after it has been made. At this point, the herbs still taste fresh and zingy, but the flavors had been allowed to blend and mellow thanks to the addition of vinegar.

The vinegar in both homemade and store-bought chimichurri sauce also has a natural preservative effect, helping to inhibit the growth of bacteria.

Store-bought chimichurri sauce has normally been pasteurized and may contain additional preservatives to help it stay stable for even longer.

But like most good things in life, chimichurri sauce will not last forever!

Eventually, the fresh herbs will start to degrade in quality, and start to turn bad. If chimichurri sauce has started to deteriorate and go bad, there are certain tell-tale signs to look out for.

The joy of a fresh batch of chimichurri sauce is its vibrant green color, adding a splash of color as well as herby goodness to cooked steaks. However, over time the fresh herbs will lose their vibrant green color and turn much darker.

If your sauce is just a bit darker than normal and you can’t see any other changes, then it is probably fine to eat. However, it might not have the same fresh and zingy flavor as a freshly made batch of sauce.

But if you see any other changes to the color of your source, such as patches of mold, it is definitely past its best and should be discarded!

If you take a good sniff of a batch of fresh chimichurri sauce, all you should smell is fresh herbs and vinegar.

When the sauce starts to go bad, you may detect a slightly musty or moldy smell.

So, if your chimichurri sauce has passed the appearance and smell test, what next? If you have any reason to suspect at all that it has gone bad, then do not taste it. But if all seems good, then give it a try!

Chimichurri sauce should taste herby and earthy, with a fresh flavor. If you detect any odd or unusual flavors, then it has likely gone bad.

You are unlikely to suffer any significant health problems from eating chimichurri sauce that has gone bad, but we wouldn’t advise that you risk it!

How To Freeze Chimichurri

The great news is that you can freeze chimichurri to keep it for longer. This works best if you’ve just made a fresh batch of homemade chimichurri, or if you’ve opened a large bottle of store-bought sauce that won’t get used within a few weeks.

The best way to freeze chimichurri is in individual portions — this can be in ice-cube trays or small plastic containers, depending on how much sauce you’d need for a family meal.

Once the sauce is frozen, the cubes should be decanted into a larger airtight container or Ziploc freezer bag. Make sure to label it with the contents and the date it was frozen!

Frozen chimichurri sauce will stay fresh for up to three months in the freezer. After this, it will still be safe to eat but may have deteriorated in terms of texture and flavor.

How To Defrost Chimichurri Sauce

If you’re organized enough to plan ahead, take your chimichurri sauce out of the freezer the night before you want to use it. Place the frozen cubes in a covered bowl in the fridge and allow them to defrost slowly overnight.

But what if you forget, or have a last-minute change of plan for dinner?

You can quickly defrost cubes of chimichurri sauce by placing them in a bowl in a hot water bath. Check the temperature of the water regularly, and refresh it with hot water if necessary.

And if you’re in a big rush, you can defrost chimichurri sauce in the microwave, but this is a risky move. If you overdo it, the sauce will start to heat and cook, ruining the fresh flavor of the herbs.

Using defrost mode, place your frozen cubes of chimichurri sauce in a microwave-safe container and set the timer for 10 seconds.

Check the sauce after every 10 seconds — once they are partially defrosted, take them out of the microwave and leave them to fully thaw out at room temperature.

How Long Do Cocoa Bombs Last?

How Long Does Cotija Cheese Last?

How Long Does Potato Soup Last In The Fridge?