How Long Does Potato Soup Last In The Fridge? 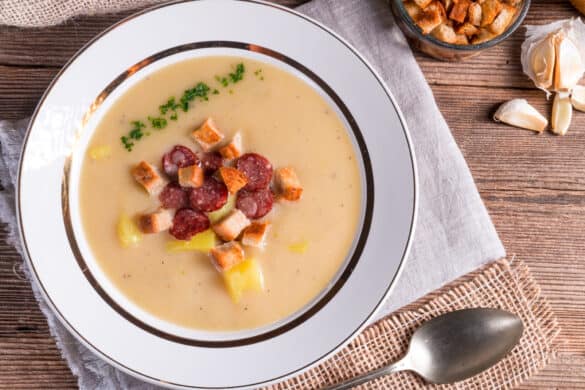 Potato soup is a classic comfort food that is hearty, filling, and oh-so-delicious. It can be made in many different ways (vegetarian, vegan, or meat-based) and you can add your choice of ingredients to it, such as cheese, bacon, or broth.

Because of how healthy and delicious it is, you may be tempted to make a big batch of potato soup to enjoy it later as well. However, this can leave you questioning how long you can store it in the fridge before it goes bad.

So, how long does potato soup last in the fridge? Potato soup generally lasts up to 5 days in the fridge, which is the best way to store it. There are numerous factors that affect how long it might be good for, however, such as the ingredients used, the preparation method, and the storage conditions.

Read on to find out how long potato soup will last in the fridge, the best way to store it to make sure it lasts the longest, how to tell if it has gone bad, and more!

The best way to store potato soup, whether homemade or canned, is in the fridge. However, there are a few basic guidelines you need to follow to make sure it lasts as long as possible.

The main thing that causes the soup to go bad is the presence of bacteria. This can be due to a number of reasons, the biggest one being improper storage and handling.

To maximize the shelf life of the soup in the fridge, make sure the temperature of the fridge remains consistent and doesn’t drop below 40°F.

Don’t keep the soup in the fridge’s door as the frequent opening and closing of the fridge causes the temperature to drop rapidly, affecting the shelf life of the soup.

The mode of storage is another important thing to consider, which refers to the type of storage container you use.

An airtight glass or plastic container is the best option to choose — try to find a shallow and wide container so that the soup can cool quickly and evenly.

How Long Can You Keep Potato Soup In The Fridge?

Potato soup can last in the fridge for up to 5 days if the storage conditions are ideal.

Let’s review several other factors that will affect how long your potato soup will retain its flavor and quality.

This isn’t a definitive list since everyone has their own version of this creamy soup. You can add cheese for maximum flavor or use additional herbs and spices or your choice of vegetables.

As is obvious, the ingredients you choose to add to your soup will have an impact on how it keeps in the fridge and for how long. Every ingredient has a different shelf life and some will increase the risk of curdling the soup more than others.

For a dairy-based soup such as potato soup, the higher the amount of fat in it, the lower the chances of it curdling.

If you are using low-fat or skim milk to make the soup, you can make a flour slurry and mix it with the milk to prevent curdling. You may also add a bit of heavy cream.

If you are preparing a vegan version of the potato soup, it will last longer than the meat and dairy versions. You may use thickening agents such as coconut milk, chickpeas, nuts, and beans.

The preparation method for the potato soup is another important factor to consider when determining how long it will last in the refrigerator.

If you are making a dairy-based soup using cream, you can cook the broth, meat, and vegetables first and refrigerate this base for up to 2 days before you incorporate the dairy ingredients.

Tempering the dairy is another great tip to prevent it from curdling.

You can either heat the milk to around 190°F before adding it to the soup or add small amounts of the heated soup to the milk until it reaches 190°F and then add the mixture to the soup.

Do not let the soup boil when heating it, and hold off using salt till the serving time as it may accelerate curdling.

For vegan potato soup, you can make a broth base and keep it in the fridge for 4-5 days. You can add the cooked potatoes to the soup on the day of serving since, if added earlier, they may separate and create an unappealing texture.

Before storing potato soup in the fridge, you need to bring it down to room temperature, which usually requires leaving it out on the kitchen counter for a while.

You need to be extremely careful about not leaving it at room temperature for more than 2 hours as it increases the chances of bacterial contamination.

Depending on the temperature and humidity levels in your kitchen, it may even start to go bad before the 2-hour mark.

Keeping this in mind, you may want to cool the soup down within this brief window. The sooner you do it, the better. To speed up the process, you may cool the potato soup in an ice bath and keep stirring.

Never keep hot potato soup in the refrigerator as it may raise the temperature of the fridge and affect the other items inside.

Can You Freeze Potato Soup?

You can freeze potato soup, but it won’t freeze that well, especially if you use dairy ingredients such as milk or cream.

If you know that you are going to have to freeze your leftover potato soup, you must account for it while making the soup.

Since dairy is what causes it to not freeze as well, you have two options.

You can either leave out the dairy before freezing and add it later during reheating, or use a non-dairy milk alternative as it won’t separate as much as heavy cream.

An unopened can of potato soup has tons of preservatives and will retain its best quality for about 3-5 years.

It is best to check the “best by” or “best before” date printed on the packaging to determine how long it will remain at peak quality.

Once opened, it will last for about 3-5 days in the refrigerator if kept in ideal conditions.

The best way to tell if it has gone bad is to check the way it smells and looks (more on this below). Similar to homemade potato soup, if it develops a weird odor, is discolored, or has mold growth, it should be discarded.

When buying canned potato soup, if you see that the container it is in is leaking, rusting, bulging, or damaged, do not buy it as it is either already bad or will speed up the process of it going bad.

How To Tell If Potato Soup Has Gone Bad

Potato soup is a perishable food item and will start to go bad after a specific amount of time has passed.

If you consume spoilt potato soup, you will most likely experience digestive issues such as diarrhea and vomiting.

Luckily, there are several telltale signs that point toward the soup’s quality and whether or not it is suitable for consumption.

All you need to check whether the potato soup has gone bad is how it smells and looks. Its taste would also be affected, but it’s better to avoid tasting potato soup that looks or smells off since you would risk getting sick.

Fresh potato soup has a nice, warm, and creamy smell. If stored properly, the leftovers should smell just as good as the day the soup was made.

If you notice a change in the way it smells, it is a clear red flag and cause for you to proceed with caution. Spoilt potato soup will have a strong, sour, or rancid odor.

If you notice that your leftover potato soup doesn’t have its original color and has instead taken on a darker shade, chances are that it has gone bad.

There may also be slimy spots on top of the soup, which are caused by bacterial growth, and can make you sick if consumed.

Other than that, if you see mold growing on the soup, you should discard it immediately and clean the container and storage area immediately.

Curdled potato soup is also a sign that your soup may be past its prime. Spoilt potato soup can form lumps in the broth or become too thin and watery.

Can You Freeze Cream Soups? – The Ultimate Guide

Can You Freeze Potato Soup? – The Best Way

Can You Freeze Broccoli Cheese Soup?

Can You Freeze Asparagus Soup?

How To Keep Hot Dogs Warm

Can You Put Glass On The Stove?