Home Foodsguy Shumai Vs Gyoza – What’s The Difference?
FoodsguyThis vs That 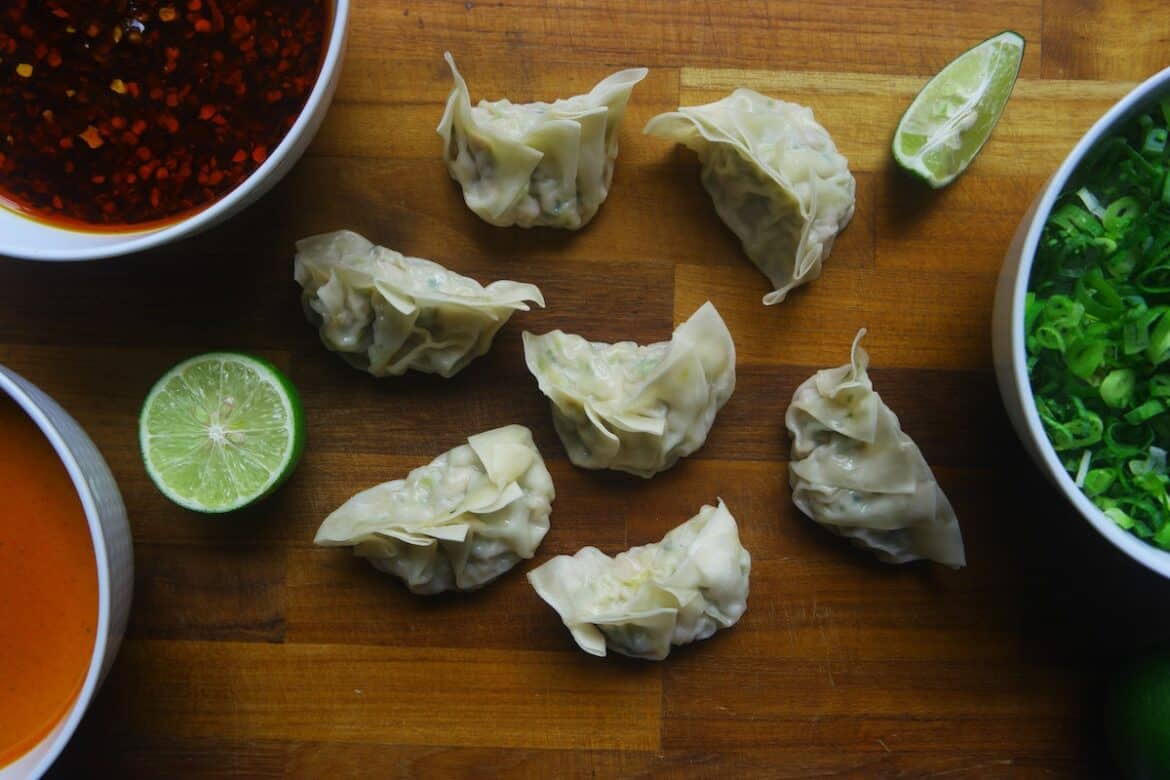 When it comes to Asian dumplings, things can get really complicated. Shumai and gyoza are two popular Asian dumplings. Many people enjoy them without knowing the differences between the two.

What are the differences between shumai and gyoza? The key differences between shumai and gyoza include their origin, appearance, and cooking method. For example, shumai originated in the Guangdong province of China and has a cylindrical shape, looking like a small basket. Gyoza, on the other hand, originated in Japan and looks like a half-moon, very similar to potstickers.

In this article, we have compared shumai and gyoza dumplings to make it easy for you to distinguish between these two savory treats and learn about the specifics of each.

Shumai, also spelled as siu mai, is a type of Chinese dumpling. It is a popular dim sum meal.

These steamed dumplings stuffed with minced pork or prawns are served as a snack or a side dish. The true Chinese version of shumai also has vegetables.

While shumai is originally from China, there is also a Japanese version of it that became popular in Japan in the 1930s. Japanese shumai is slightly different from Chinese shumai. It is simpler as far as the filling is concerned.

Gyoza is the name given to Japanese dumplings. These dumplings are stuffed with ground meat and vegetables.

The story behind the Japanese gyoza is very interesting. These dumplings were inspired by Chinese potstickers.

During the years of the Second World War, Japanese soldiers ate Chinese potstickers in Northern China.

When the war was over and the Japanese soldiers were back home, they recreated Chinese potstickers and came up with dumplings that are now known as gyoza.

Are Gyoza and Dumplings the Same Thing?

Gyoza falls within the category of dumplings. Technically all gyoza are dumplings but not all dumplings are gyoza.

The biggest difference between gyoza and dumplings is that the wrapper used to make gyoza is thinner and the ingredients used to stuff it are more finely chopped.

Additionally, the most common preparation method for gyoza is pan-frying them for a crispy texture while dumplings are usually steamed.

What Are the Differences Between Shumai and Gyoza?

Shumai and gyoza have many similarities, including the fact that both are made with the same kind of wrapper and similar ingredients are used in the preparation of these two dumpling varieties.

Let’s compare shumai and gyoza to find out the similarities and differences between these two Asian foods.

While shumai has become popular in Japan since the beginning of the 20th century, it actually originated in the Guangdong province of China.

Shumai is translated as cook (shao) and sell (mai). This indicates that it has always been a kind of street food that was made and eaten on the go.

Gyoza, on the other hand, is a Japanese dumpling variety.

Both gyoza and shumai have a few varieties. The three main types of Japanese gyoza are the following.

When it comes to the variations of shumai, there are many. There are numerous Chinese varieties of shumai dumplings, including Hohhot shaomai, Cantonese siumaai, Jiangnan shaomai, and Uyghur shaomai.

These shumai varieties are slightly different as each province and region uses different ingredients and cooking methods.

Some Chinese shumai variations also look a little different though the general shape of these dumplings is always the same.

As shumai has become popular among all Asian countries, there are also non-Chinese variations of shumai, including Vietnamese, Philippine, Indonesian, and Japanese shumai.

The key similarity between gyoza and shumai is that both are made with thin wheat flour wrappers.

But gyoza and shumai are different in terms of the ingredients used to make their fillings.

The common filling used for gyoza is minced pork and vegetables, namely cabbage, spring onion, and ginger. Other meats, such as minced beef or chicken, can also be used for gyoza.

Pork is a common ingredient for shumai too. However, the difference is that shumai filling is generally a combination of minced pork and prawns while gyoza is made only with minced pork.

The Japanese variation of shumai dumplings is different from the original Chinese version. The main ingredients are pork and onion. The open part of the dumplings is also topped with green pea.

There is also a difference in the texture of the meat. In Chinese shumai, the meat is simply minced while in the Japanese variation of this dish the pork is ground to a paste.

Gyoza dumplings have a half-moon shape. They are pressed on the edges to secure the filling inside the wrapper. Gyoza dumplings sit flat which makes it easy to pan-fry them.

Shumai dumplings, on the other hand, have a cylindrical shape and look like a basket. What makes them detectable is their open tops. You can easily see the filling of shumai dumplings.

The flavor of gyoza and shumai depends on the ingredients used to make them. Both dumplings have a savory flavor which is enhanced by the soy sauce that always accompanies them.

Flavor notes specific to shumai come from ginger and scallions. Both are staple ingredients used in the making of these Chinese dumplings. Shiitake mushrooms in shumai enhance the umami flavors of these dumplings.

Gyoza also features a combination of meat and vegetables. Cabbage is a popular ingredient for gyoza filling. While the napa cabbage used to make gyoza has a mild flavor, it gives the dumplings a nice crunchy texture.

Japanse gyoza has a rather unique texture. Gyoza is first pan-fried and then cooked with a small amount of water.

Because of this, it is crispy from the outside and very tender inside. Deep-fried gyoza, on the other hand, has more crunch to it and the filling is obviously less juicy.

If you like a more delicate texture, you should certainly try boiled gyoza. Boiling gyoza in water or broth makes it chewy and very tender.

As you don’t fry shumai and only steam it on a bamboo steamer, it lacks the crunch of the wrapper gyoza has.

How shumai and gyoza are cooked is one of the key differences between the two dumpling varieties. Shumai is typically steamed on a bamboo steamer while gyoza is first pan-fried for its signature crispy texture.

As opposed to shumai, you can use other cooking methods for gyoza too, such as steaming, boiling, and deep-frying.

The nutritional value of shumai and gyoza depends on the ingredients used to make them as well as the cooking method. For example, fried gyoza certainly has more calories and fat than steamed gyoza.

However, the difference in calories between shumai and gyoza isn’t significant. The two dishes are also similar in terms of their fat, sodium, and cholesterol content.

There is a major difference in the vitamin and mineral content of the two dishes which is mainly because of the cabbage in gyoza.

In Japan, people serve gyoza as an appetizer or a snack. It is also a popular festival and street food.

The most common dipping sauce served with gyoza is soy sauce combined with an equal amount of vinegar. Chili also goes into the gyoza sauce to make it a little spicier.

As you already know, the Japanese have their version of shumai too. They like eating shumai as a snack or serve it as a side dish.

Aside from the traditional soy sauce-vinegar blend, shumai is often accompanied with mustard in Japan for an extra kick of flavor.

In China, shumai goes on the table alongside other dumplings. It is often served for breakfast and accompanied by tea.

Chinese shumai is served with the open part of the dumpling covered with orange roe or carrots for added color and taste.

Shumai is also served with a dipping sauce made with vinegar, soy sauce, and chili.

Up Next: Is Sugar A Condiment?

Is Sugar A Condiment?

How To Tell If Broccoli Is Bad – The Ultimate Guide