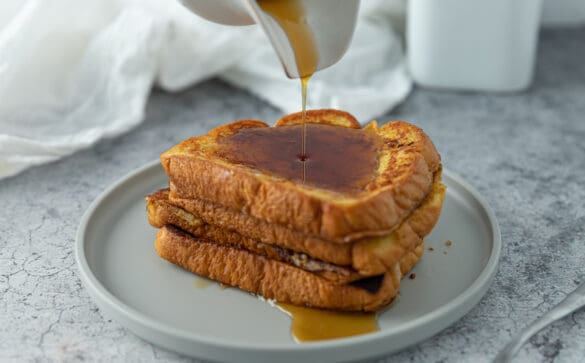 French toast is a staple for any brunch gathering. It’s easily one of the most loved breakfast foods in existence. You’ll find french toast at any breakfast buffet or at your favorite fancy brunch restaurant.

What I love about french toast is how simple and easy it is to make. The ingredients are very basic pantry staples that almost everyone has at home.

All you really need for the most basic French toast is bread, eggs, and milk. It’s easy enough to change up this recipe just by adding different toppings as well.

French toast is the perfect breakfast item for breakfast in bed for Mother’s Day or Father’s Day. You probably don’t have to go shopping for ingredients and it can be dressed up with many different toppings.

If you really want to impress some people with your French toast making skills, this is my favorite breakfast cookbook and it has some out of this world French Toast recipes.

It’s also easy to make French toast in bulk for a large crowd for brunch. You can cut it diagonally or into strips that can be dipped into syrup.

French toast sticks can be a fun way for kids to eat them as well. There are also many different French toast casserole recipes to try if you want to bring the dish to a party.

What is French Toast?

French toast is an old recipe and its origins are not really known. Although the name of this recipe suggests that it is from France, a similar recipe was made in the Roman Empire.

This recipe has gone by other names before we came to know it as “French toast.” People often made this recipe using stale bread to make it more palatable.

In France, this recipe is actually known as “pain perdu” or “lost bread” (the history of that name goes back to the 15th century). It later became known as French toast as it gained popularity throughout Europe.

Vanilla is not an ingredient that is really necessary for most recipes. Vanilla simply adds a subtle flavor to most recipes that call for it.

Vanilla extract often comes in a very small bottle and it’s easy to run out of it quickly if you like to bake.

In this French toast recipe, we substituted vanilla with maple syrup. It is a different flavor, but they both complement a sweet recipe well if you feel you need extra flavor.

You could use other extracts like almond extract if you have it available (or you can just pick it up on Amazon, I personally like this one).

You can also simply leave the vanilla out altogether. When adding syrup or other toppings you likely won’t miss teaspoons or two of vanilla extract.

For more substitution ideas, you can check out our article about the best substitutes for vanilla in cookies! (Let us know if you try any of these substitutions with your French toast.)

Toppings are the most exciting thing about French toast! A classic French toast is served with butter and maple syrup.

Another popular and simple topping is powdered sugar with cinnamon. But just like so many other sweet recipes, there are hundreds of different combinations that you could choose.

It’s also possible to make a “stuffed” French toast recipe by adding something between two slices like cream cheese frosting, chocolate, or Nutella.

A few of my favorite French toast toppings are:

Types of Bread for French Toast

You can really use any type of bread for French toast but some are a little better than others. It’s important to have a bread that is thick-sliced and that holds together well.

The bread will have to be dipped in the egg, so you don’t want it to fall apart before it makes it to the pan.

Brioche and challah bread are both popular choices for French toast. They have excellent flavors that complement this sweet recipe and hold together very well.

If you buy a loaf of bread that isn’t sliced you can also create thicker slices of bread which will help with this recipe. However, any type of bread that you have available should work. It can be white, wheat, or multigrain bread, whichever you prefer.

I used potato bread for this recipe. It’s a favorite in our house and the sweetness of this bread works very well for french toast.

How To Make French Toast Without Vanilla

Step 3: Grease a skillet with butter or cooking oil and place over medium-high heat.

Step 4: Soak each slice of bread on both sides.

Step 5: Quickly transfer bread to skillet and cook until golden brown on both sides.

Grease a skillet with butter or cooking oil and place over medium-high heat.

Up Next: Can You Freeze French Toast?

How To Fix Bitter Cake – The Ultimate Guide

Can You Microwave Sour Cream? – The Ultimate Guide