17 Foods That Start With Z 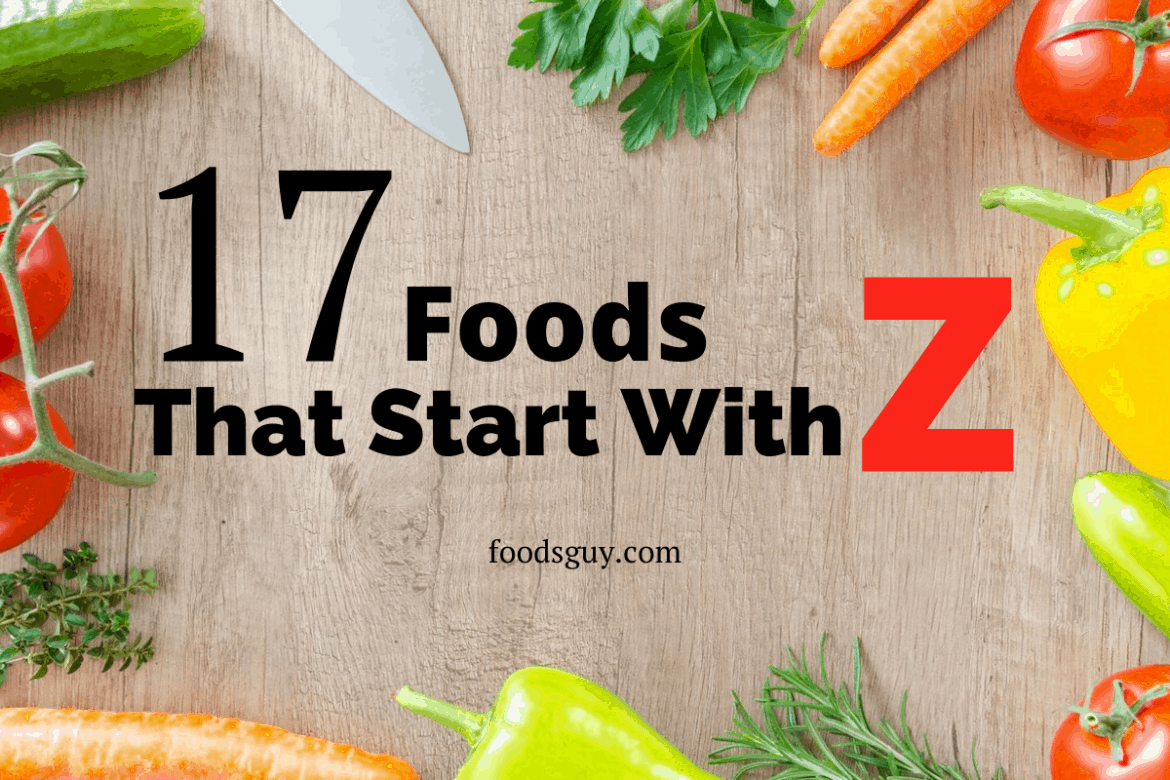 The world is full of interesting and delicious foods and this article rounds out our series exploring foods from A to Z. Whether you’re searching for a new culinary experience to try or looking for an explanation of a strange food you’ve recently discovered, chances are we have covered it in one of our related alphabetical posts.

What follows in this article, however, are 17 foods that start with Z.

17 Foods That Start With The Letter Z

Zabergau Reinettes are a large variety of apple. They’re russet apples, with a pale, almost metallic copper color muting the bright green of their skin. The flesh is very pale yellow and has a fine grain.

It’s a German heirloom variety. The term “reinette” is French for princess and indicates the tree was grown from seeds rather than grafts.

Zabergau apples are commonly cooked as they develop a sweeter flavor as they age and taste much nicer than when they are freshly picked from the tree. If timed right, they will have a nutty, almost spicy flavor.

Zaghloul dates are primarily grown in the Middle East and can be difficult to source in the US. They are sometimes called ‘red dates’ because they have deep red or burgundy outer skin. The flesh inside, however, is a bright white.

These dates have a surprisingly crisp texture when fresh, similar to an apple. They are not fibrous like some dates, but they are as sweet as you would expect a date to be.

The flavor profile is more complex than other varieties, combining notes of cinnamon with a surprising astringency.

Zander fish are popular game fish found in freshwater in Western Eurasia, considered the most valuable food fish in Europe.

In the 80s, they were introduced as stockfish in North Dakota though they’re pre-emptively being considered an invasive species in Ontario, Canada because if they reach the Great Lakes they will compete with native species.

They’re ray-finned fish related to perches. They have firm white flesh that is tender and delicate, with few bones. They’re very versatile, being served whole or as fillets and equally delicious when baked or smoked.

Zapotes, sometimes also called sapodillas or sapotes, grow in tropical rainforests of Central America and nearby regions. The fruits have hard, woody, brown rinds that peel away surprisingly easily, similar to citrus fruits.

The fruit inside is a vivid, rich orange or coral color. Though it can be somewhat stringy, the texture is otherwise similar to avocados. The flavor, however, is closer to fig and as sweet as jam.

Zapotes have a high concentration of a compound called saponin, which is quite astringent and can leave you with a dry mouthfeel.

Zapallo loches are Peruvian squash that can be oblong, bottle-shaped, or crookneck. They have dusty, blue-green skin that is covered in bumps and knobs.

This type of squash has the best flavor when harvested young, so they’re rarely allowed to grow more than 2 pounds. The flesh is firm, golden yellow, and surprisingly smooth.

The flavor can be compared to that of butternut squash that has been spiced. It’s quite versatile and is frequently consumed raw and grated, cooked in chunks, or pureed for soup.

Zapallo Macre is another type of squash that is native to Peru, however, this one is considerably larger than the Loche. These fruits can grow up to nearly 2 feet in diameter and are mostly round, with a firm, grooved, dark green rind.

Inside the flesh is bright yellow or pale orange and very dense. It has a large central cavity filled with stringy, spongy fibers and soft seeds.

The Macre variety of squash is typically cooked, either roasted, baked, or boiled. The flesh turns rich and creamy with a subtle sweet flavor.

Zebra eggplants are so pretty they’re hard to eat. Some call them graffiti eggplants, striped eggplants, or even fairytale eggplants. Their pink-purple skin is striped with white and they are considerably smaller than conventional eggplants.

They can be prepared in all the same ways a standard eggplant is prepared, perfect for grilling, roasting, or tossing into a rich tomato sauce.

They are the least bitter of all eggplants, thanks to the thin skin and tiny seeds. Their flavor is sweet, more like a fruit than a vegetable.

Zebra melons are native to Indonesia though they’re grown throughout Europe and Northern Africa and exported to most of the world. These melons have a dusty grey-green rind that is roughly textured. Darker green vertical stripes are running along the length of the fruit.

The flesh inside is a rich salmon color. The fruit is tender and very juicy, though dense. Multiple seeds are housed in a central cavity that has a looser, slightly slimy texture.

The melons are very aromatic with a noticeably floral fragrance. The flavor is less complex, simply honey-sweet.

Zebra tomatoes come in red, green, and yellow varieties. Regardless of the color, the skin of these fruits is covered in vertical stripes, giving them their name.

Green zebra tomatoes are relatively smooth and round, whereas the red and yellow varieties tend to be more lopsided and have significant grooves alongside their stripes.

Zebra tomatoes are well-balanced sweet and tart with mild acidity levels and just a small amount of astringency. They’re also known to be quite juicy.

Zhe fruits are sometimes called Chinese mulberries though they are not truly part of the mulberry family. They look strikingly similar, however, so the name seems to fit.

These berries grow on trees throughout East Asia. They develop in clusters of small, lopsided, bumpy ovals. They are a bright red color that deepens to a darker red with black spots as they ripen. The firm, juicy flesh is slightly chewy.

Every berry will vary in flavor because, even within the same cluster, they ripen at different rates. A mature fruit will be very sweet, similar to a cross between a melon and a fig.

The fruits have a spicy sweet citrus flavor that can be compared to orange sherbert. They’re very commonly used to make beverages, including liqueurs or rich sauces

If you’re a fan of wine, you may have heard of Zinfandel. Depending on where you are when you purchase a bottle, you may either find yourself with a bottle of robust red or a sweet rose called White Zinfandel, which is much more popular in the US.

Zinfandel grapes have a very high sugar content that, when fermented, can produce alcohol levels topping 15%.

The flavor of the grapes varies depending on the temperatures they are exposed to while they grow. Cool-weather zinfandel grapes will have raspberry notes, whereas grapes grown in warmer climates will lean more toward blueberry with notes of pepper and anise.

Ziti is a type of pasta, shaped similar to penne but with ridges covering the entire surface.

The most common use for ziti is baked ziti, an Italian-America casserole creation featuring a tomato sauce, multiple types of cheese, and your choice of filling ingredients, such as ground meat, peppers, mushrooms, and/or onions.

Zizania latifolia is a rare species of wild Manchurian rice. In ancient China, it was a very important grain sustaining the country but in recent years it has nearly disappeared.

If the plant is cultivated now, it is mostly for the stems rather than the wild rice. The stems are prone to a fungus that cause them to grow thicker and faster. Once they’re harvested, they can be either cooked or eaten raw.

Ziziphus fruit, also called ziziphus jujuba, jubube fruit, or zuzunbi jujubes is a Chinese fruit similar to a red date. They are round or oval with wrinkled, dark red-brown skin.

Inside the flesh is opaque white or very pale green with a single small inedible it in the center. The fruits are crisp and slightly grainy in texture, similar to an apple or pear.

Ziziphus fruits are most commonly eaten raw, freshly picked. Everything but the pit is edible and they can be extremely sweet or have more subtle notes of tangy and tartness.

Zucchini is one of the most popular summer squashes worldwide. The oblong, cylindrical squash has dark green smooth, glossy skin and creamy white flesh. The texture is slightly spongey and very delicate.

They have a very mild flavor but work well in sauces where they soak in surrounding flavors. They can also be used in sweet recipes, such as muffins, pancakes, or loaves of bread.

Zuriat fruits are a type of palm fruit native to Northern Africa. It is exported throughout much of Asia as well.

The fruits develop into ovals that are on average 3 – 4 inches around. They have a woody, fibrous brown outer skin that is covered in bumps and divots. Inside there is fibrous, spongey flesh protecting a large seed that takes up the majority of the center of the fruit.

The flesh is often eaten out of hand or cooked into sweet bread or cakes. It is crunchy and a well-balanced sweet and tart flavor that is most often compared to gingerbread. The seed is also edible and is more likely to be prepared like a vegetable, boiled or baked.

Up Next: Provolone Vs Mozzarella – What’s The Difference?

39 Foods That Start With Y