How To Eat Biscotti 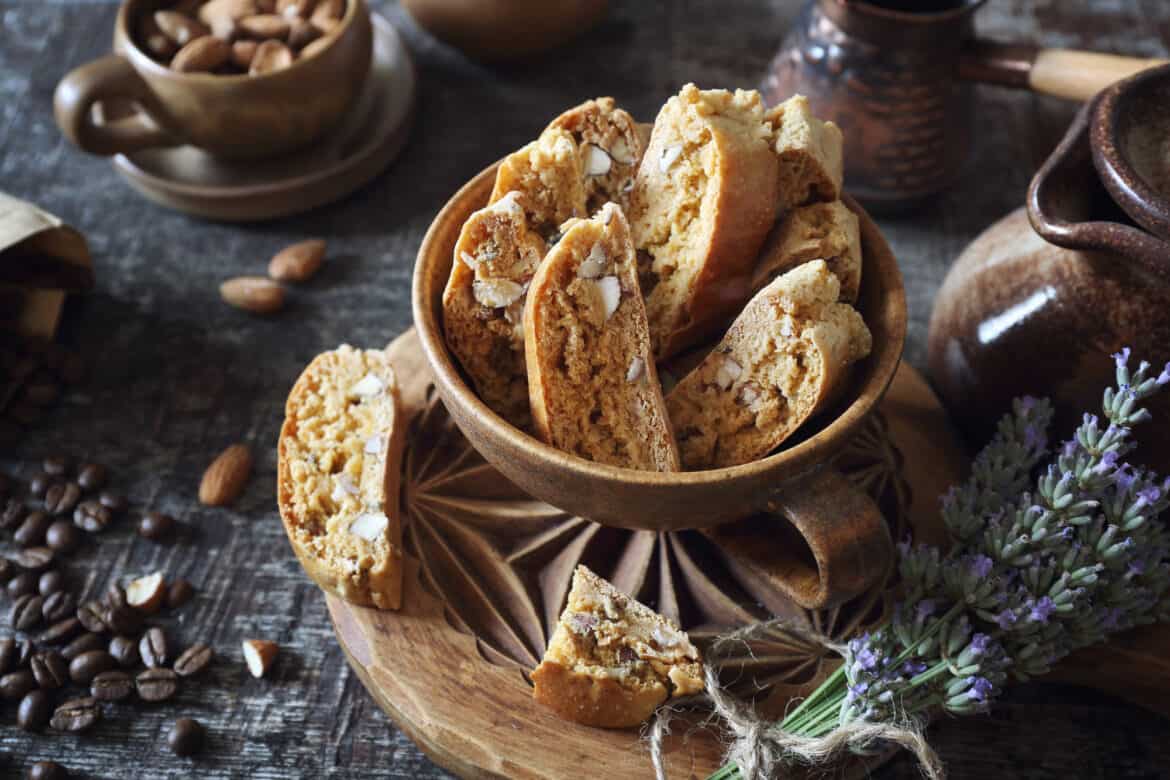 Many people have put off biscotti due to their dry, crunchy texture, but it is this very quality that means that they can be eaten and enjoyed in all manner of unusual ways.

A perfectly crafted biscotti is a delight to behold, and deserves to be eaten as its creator intended!

But how do you eat biscotti? The traditional way to eat biscotti is by dipping these crunchy baked biscuits in a glass of sweet fortified wine as an after-dinner dessert. Alternatively, you can dunk them in coffee, tea, hot chocolate, or milk, or crumble them on top of ice cream and other desserts.

If you’ve been gifted a pack of gourmet biscotti, or are tempted to buy a bag from your Italian grocery store, you’ll want to make sure that you enjoy them in the best possible way.

Keep reading to find out everything you need to know about how to eat biscotti!

Biscotti are a traditional Italian pastry cookie with a characteristically dry, crunchy texture. This occurs as a result of the way in which they are made, as they are baked twice to achieve this crispness.

Biscotti have long historical origins, and a form of this cookie was carried by Roman legions on their travels to conquer distant lands. The name biscotti comes from the Latin word ‘biscuits,’ which means ‘twice cooked.’

Modern recipes stay close to the original ingredients, although a raising agent such as baking soda is often also included.

It is also now commonplace to use a fat such as butter when making biscotti, giving them a richer and more indulgent flavor.

You may find that modern biscotti recipes include either pine nuts or almonds, and not both. Some do not contain nuts at all and use almond essence, vanilla, or anise to add flavor.

Deluxe biscotti are often dipped in melted chocolate for an extra level of indulgence.

Biscotti dough is rolled into a log shape, which is then baked. This baked log is left to cool and then sliced on the diagonal, creating long, thin slices. These are then baked again to achieve the characteristic crisp, dry texture.

The advantage to this second bake is that it removes just about all of the moisture from the dough. This means that biscotti have a very long shelf life, as they are less likely to go moldy.

Very useful if you’re a Roman soldier marching for hundreds of miles!

Biscotti are also relatively healthy compared to many other types of cookies, biscuits, and pastries, as they tend to contain less butter and lower amounts of sugar.

A classic biscotti has a relatively mild flavor and will mainly taste buttery with a hint of sugar. This neutral flavor is surprisingly satisfying and blends well with many other foodstuffs and drinks.

Biscotti should not be so sweet that they are sickly, and they generally contain less sugar than most other types of cookies. The flavor is deliberately intended to be mild, as it is the way in which they are eaten that adds to the flavor.

The main flavors of traditional biscotti are vanilla, almond, and anise, with a subtle hint of butteriness. Think of a chocolate chip cookie with less sugar and without the chocolate, and you’ll be in the right ballpark!

You will often find biscotti sold in three different types – almond, vanilla, and chocolate. If you’re feeling really decadent, opt for a pack of biscotti that has multiple flavors for you to sample!

Almond biscotti are enhanced with almond flour or crushed almonds in the dough, whilst vanilla biscotti contain vanilla extract.

Chocolate biscotti may have a thin coating of chocolate that is applied after they are baked, normally to just one-half of the biscuit.

Biscotti may not be strong in flavor, but there is a good reason for this. All will be revealed when we find out the best ways to eat biscotti!

Biscotti are quite unlike any other type of cookie or biscuit, and for a very unusual reason.

These biscuits are deliberately so dry and crunchy that they are almost unpalatable, but when eaten in the manner in which they were intended, they are completely transformed!

Biscotti are very rarely eaten alone and are intended to be dunked into a liquid. The dry and crumbly consistency is perfect for drawing in fluids and absorbing flavor throughout the whole cookie.

If you really wanted to, it would be perfectly fine to nibble on a plain biscotti. In fact, many people enjoy eating them this way, and there is no reason why you shouldn’t!

But to really do them justice and enjoy them the traditional way, they should be dunked in a drink first to make them soft and full of flavor.

There are other ways to enjoy biscotti if you don’t like the idea of dunking them in a drink. The crunchy texture can be softened by adding a layer of something moist, such as jam, or they can be crumbled and used as a topping for desserts.

Best Drinks To Pair With Biscotti

Biscotti pair well with many different beverages, but the traditional way to enjoy these crunchy cookies is by dunking them in a glass of sweet, fortified wine.

Yes, we know that this sounds very unusual, but this is how biscotti are served in Tuscany!

The wine used to pair with biscotti is known as ‘Vin Santo’, but any type of sweet marsala-style wine will work well. This pairing is a commonplace dessert served in restaurants all over Italy and beyond.

Now we wouldn’t recommend that you have a glass of fortified wine every time you want a biscotti, as that would definitely exceed the recommended daily alcohol limits!

Lucky for all of us, biscotti can be dunked in many types of drinks, not just sweet fortified wine.

The flavor of biscotti works particularly well with coffee, and these biscuits can be dipped in any style of coffee, from a foamy cappuccino to an energy-boosting espresso.

The crunchy biscuit is perfect for absorbing the flavor and moisture of coffee, adding a hint of sweetness along the way.

If you’re not a fan of coffee, then biscotti can be dipped in pretty much any hot beverage!

Tea drinkers often enjoy a biscotti or two with a cup of Earl Grey or English Breakfast tea, but they also pair well with many types of herbal tea.

For a more decadent option, biscotti can also be softened by dipping the biscuits in hot chocolate or a milkshake, while the combination of biscotti and ice-cold milk makes the perfect bedtime drink for children!

When it comes to dunking biscotti in a hot drink, the method is equally as important as the type of drink you choose. Get the timing wrong and you’ll be highly disappointed with your cookie and drink combo.

Dunk it too quickly and your biscotti will barely have a chance to soak up the liquid and any new flavors.

Leave the cookie in the drink for too long, and the biscotti will become too soft and soggy. This can lead to the worst-case scenario — the biscotti falls apart inside your drink!

The optimum timespan for dipping biscotti into a drink is around 10-12 seconds. This leads to a perfectly softened biscotti that has soaked up the flavors of your drink, without becoming soggy and falling apart!

The great thing about biscotti is that these hard, crunchy cookies are incredibly versatile. While they were intended to be dipped in a drink to soften them, you can also enjoy them in a myriad of other ways!

All you need is something that contains moisture to soften the twice-baked biscuit.

This could be a generous helping of jam or fruit compote or a spoonful of yogurt or Crème Fraiche. A drizzle of honey will add a hint of sweetness, helping to bring the biscotti to life.

For a more decadent option, there are many ways in which biscotti can be incorporated into a dessert recipe.

They can be crumbled up and used as a topping for ice cream or frozen yogurt, or blended into fine crumbs to use as a cheesecake crust.

Biscotti can also be used to make the classic American camping treat, s’mores! The gooey marshmallows and melted chocolate ooze into the crisp biscotti, creating a grown-up version of this fun family treat.

And if you want to eat biscotti straight from the packet? We say, go for it! Many people enjoy the crunchy texture of dry biscotti, and they can be eaten without any garnishing at all.

Can You Freeze Biscotti? – The Best Way

How Long Does Tiramisu Last?

Do Cannolis Need To Be Refrigerated?

How Long Does Bone Broth Last?

How Long Do Oreos Last?