Home Foodsguy Carob Vs Chocolate – What’s The Difference?
FoodsguyThis vs That 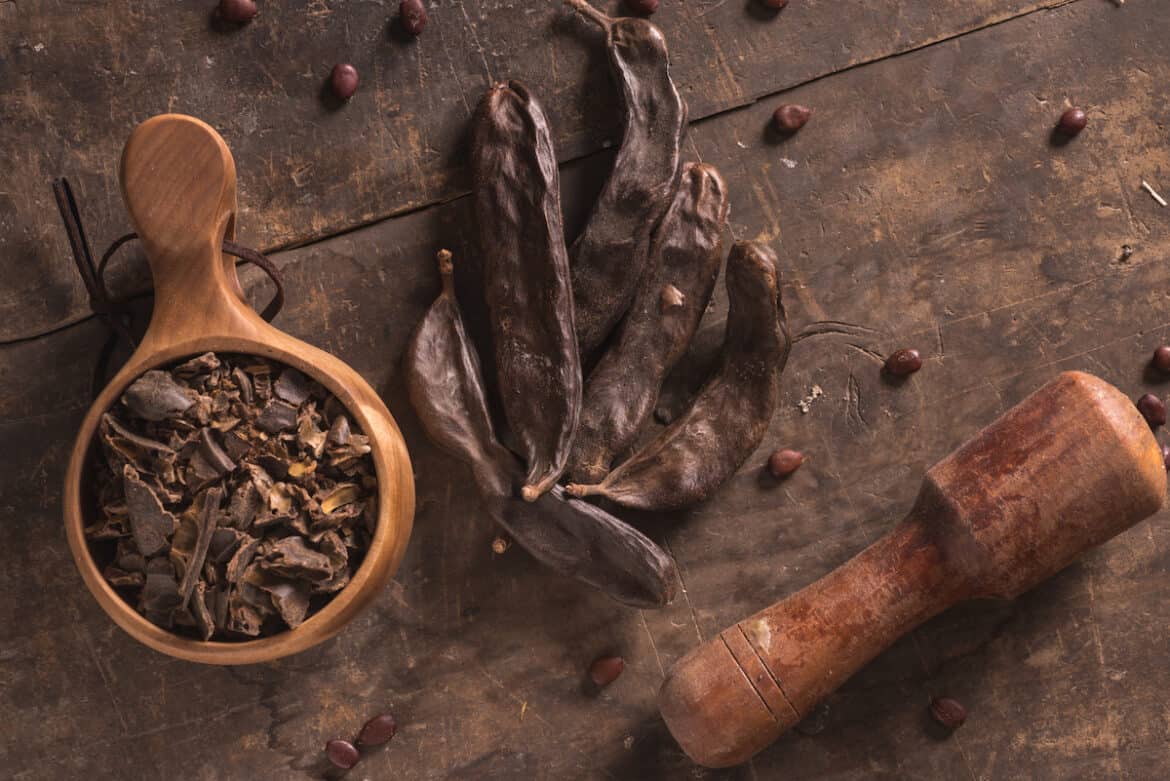 Though everyone knows what chocolate is, and has likely tried it at least once in their life, you may not be familiar with carob unless you’ve perused the shelves of your local health foods store.

You may be surprised to know that carob and chocolate, though seemingly similar, are very different foods that come from a distinct plant and have unique nutritional characteristics.

Read on to find out all you need to know when it comes to distinguishing carob and chocolate.

The Difference Between Carob and Chocolate

Below we’ll touch on price, nutrition, and the best way to use each one, as well as answering some of the most common questions that arise when trying to differentiate between carob and chocolate.

Though not nearly as popular as chocolate, carob can be used in a similar way and has a plethora of health benefits.

In fact, it has been valued for its nutritional benefits for thousands of years and was even used by the ancient Greeks for its various health purposes.

Read on to find out everything that you need to know about this healthy and delicious food.

Where Carob Comes From

As mentioned, carob is harvested from the pods of the Meditteranean carob tree (scientific name Ceratonia siliqua).

Though native to Greece and the surrounding region, these trees are now grown all over the world.

When a female carob tree is fertilized, it produces hundreds of seed pods, from which the carob that we enjoy is harvested.

How Carob Is Made

Once harvested from the pods of the carob tree, carob can be transformed into a number of different forms.

You can find carob in powder form, in chips, in liquid form as a syrup or an extract, and even as dietary pills.

Carob pods can also be consumed fresh or dried, though they are most commonly found in a processed form.

Carob has a wide variety of health benefits. It is rich in antioxidants and fiber and low in fat and sugar, and it has been reported to help ease stomach issues and promote weight loss.

Additionally, unlike chocolate, it is caffeine-free.

How is Carob Used

Carob can be used in very similar ways to chocolate. Because it is naturally sweet, it can be a great replacement for chocolate when baking.

It can replace cacao or cocoa when in powder form, perfect for making brownies and cake, and can be baked into muffins or cookies when in chip form.

As we mentioned, carob can also be found in capsule form to be taken as dietary pills.

Due to its wide variety of nutritional benefits, it is not only used as a delicious ingredient, but also a healthy dietary supplement.

Carob can replace chocolate in almost any recipe, and it is especially delicious in brownies, fudge, or cake. It can also replace cocoa powder to make imitation hot chocolate or a carob milkshake.

Carob can be used in just about any chocolate recipe.

It is important to keep in mind that carob is naturally sweeter than chocolate, so if a recipe calls for raw, unsweetened cacao or bittersweet chocolate, it will likely also call for sugar.

In this case, you’re best off omitting the sugar, or at least reducing it, when using carob in place of chocolate.

Though we’re all familiar with chocolate, we may not know exactly where it comes from or how it is made.

Believe it or not, chocolate also has a wide variety of health benefits, that is, when consuming it in raw cacao powder or dark chocolate form with little added sugar.

Where Chocolate Comes From

Chocolate, like carob, comes from a tree, in the case of chocolate the Theobroma cacao tree.

Cacao is harvested from the pods that grow on this tree.

Though it is native to Central and South America, almost ¾ of the world’s cacao is now grown in Africa.

How Chocolate Is Made

Once the cacao pods are harvested, cacao beans are removed and fermented, which is what creates the bitter taste that raw cacao and dark chocolate have.

After fermentation, the beans are dried and sent off to be processed into whichever form of chocolate they are destined for.

The beans are first roasted, a process that transforms them into cacao nibs.

These nibs are then ground into a thick paste called chocolate liquor, which is later mixed with cacao butter and sugar, milk (in the case of milk chocolate), and other ingredients.

If you’re dairy-free and avoid milk chocolate, check out these vegan chocolates.

To refine the texture, this mixture is aerated and then tempered (heated and cooled) to make a smooth and delicious bar of chocolate.

When it’s not combined with high concentrations of milk and sugar, chocolate can actually offer a wide variety of health benefits.

Like carob, it is a rich source of antioxidants, and dark chocolate has even been shown to lower the risk of heart disease.

How Is Chocolate Used

As I’m sure you know, chocolate can be found in a variety of forms. Raw cacao powder is used for baking brownies and cakes, white chocolate chips are a favorite for cookies and muffins.

Chocolate can be eaten on its own in chocolate bar form, and it can be transformed into syrup for a delicious ice cream topping.

Chocolate is a key ingredient in the traditional Mexican mole sauce, which is often served with chicken.

It has been known to cover a wide variety of foods, ranging from bacon to pickles, and pairs surprisingly well with hot chili pepper.

Both carob and dark chocolate are healthy foods that offer distinct nutritional benefits.

Which Is Healthier – Carob Vs Chocolate

As you can see, despite their similar taste, carob and chocolate differ significantly when it comes to nutritional value.

Dark chocolate has more calories and is higher in fat, cholesterol, and caffeine. Carob also has higher levels of potassium and calcium than chocolate.

However, carob is higher in carbohydrates and doesn’t have as much iron or magnesium as dark chocolate.

So which is healthier?

That depends on your parameters. If you’re watching carbs, dark chocolate is a better option, but if you’re trying to cut back on fat and/or calories, carob is the healthier choice.

Each offers a distinct nutritional value, though both are very healthy options when it comes to picking a sweet treat.

Thanks for reading through this article about carob vs chocolate. We hope you found it interesting, and we hope that you find these frequently asked questions to be equally helpful!

Is Carob Safe For Dogs?

If you’re a dog owner and animal lover, you’ll know that chocolate is one of the most dangerous things that a dog can consume.

Chocolate contains theobromine, which is not easily digested by dogs and can quickly reach toxic levels.

Carob, on the other hand, does not contain theobromine, making it perfectly safe for dogs.

If you have a sneaky dog that likes to make its way into the pantry, you’ll feel much more reassured if you have carob on hand instead of chocolate.

Carob can even be used when making special dog treats. That way, your four-legged friend can enjoy cookies too!

If you’re curious about theobromine implications for humans, check out this video by Thomas DeLauer on YouTube:

Does Chocolate Cause Headaches?

Though it has not been clinically proven, some people claim that chocolate causes headaches.

This could be caused by the presence of caffeine or certain naturally-occurring components that are found in chocolate: tryamine and phenylalanine.

The link between chocolate and headaches may not be clinically proven, but if you are prone to headaches or have noticed that chocolate can trigger a migraine, consider switching over to carob.

Cocoa Vs Cacao – What’s The Difference?

Cocoa, which is not to be confused with raw cacao, is the sweet chocolate powder that is used to flavor hot chocolate or to make brownies, is also made from cacao beans but by a slightly different process.

To make cocoa, the chocolate liquor is pressed, removing all fat, or cocoa butter, which will be later used in the chocolate-making process.

The chocolate liqueur that is left over is very dry, and is then ground into cacao powder.

Though it may seem confusing, the difference between cocoa powder and cacao powder is quite straightforward.

Cocoa powder is made using the process explained above, and it is often mixed with sweetener and/or dairy, which makes your hot chocolate so delicious.

Cacao powder, on the other hand, is made from fermented cacao beans that have not been roasted. These beans are processed at a lower temperature and then ground into a powder. This technique results in its more bitter flavor, and it makes it a very healthy product with little processing and no additives.

Up Next: The Best Sugar-Free Chocolate Chips

The Best Oil For Salad Dressing