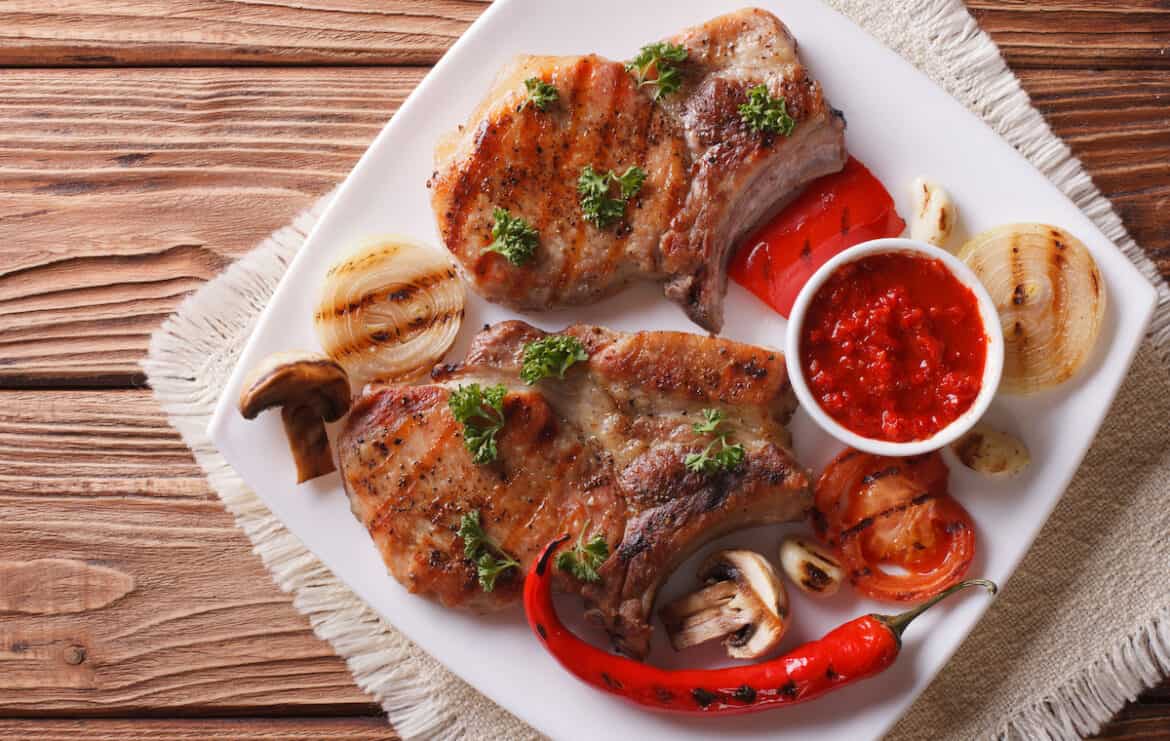 Though they come from the same animal, pork loin and pork shoulder are actually significantly distinct cuts of meat. They have different purposes, different textures, and must be prepared in different ways.

Read on to find out everything you need to know when it comes to distinguishing between pork loin and pork shoulder.

The Difference Between Pork Loin and Pork Shoulder

It’s time to talk about nutrition, taste, and answer some questions that often arise when it comes to choosing and distinguishing between different cuts of pork.

What Is Pork Loin?

Pork loin is a comparatively leaner cut of meat, meaning that it has less fat than pork shoulder.

While it is the leanest cut of pork, it is also the most tender.

Pork loin is most commonly found in the form of pork chops, though an entire pork loin can be transformed into delicious and juicy roast pork.

As mentioned, the two most common ways that you can find pork loin are as pork chops and as a pork loin roast.

When it comes to pork chops, the bone is often left in, resulting in a characteristic T-bone shape and the juiciest, most tender meat. Bone-in pork chops are often thicker than pork chops that have had the bone removed.

On the other hand, pork loin can also be found as an entire, intact cut of meat, often simply referred to as “pork roast”.

Pork loin is best when roasted whole and bone-in, though it can also be prepared with the bones removed and stuffed.

Remember that pork loin is the most tender cut of a pig, but only when properly prepared. If pork loin is overcooked, it is very easy for it to become dry and tough.

There are different methods that must be used when it comes to preparing pork chops vs pork loin.

How To Cook Pork Chops

Pork chops can be prepared in a variety of ways, ranging from stovetop to oven and even on the grill.

The most important thing to keep in mind is that the internal temperature of the meat must reach 145 degrees F before it is safe to eat.

Also, you should always properly season your pork chops before cooking them.

When making pork chops on the stove, you’ll want to cook them over medium heat for 8-10 minutes, about 4-5 minutes on each side, until the outer crust is golden brown.

Alternatively, you can pan-fry pork chops by first breading the meat and then cooking in hot oil for 6-8 minutes, flipping once.

To cook pork chops in the oven, roast uncovered at 425 degrees F for 15-20 minutes, until the meat is fully cooked and tender but not dried out.

Roasting pork chops is the easiest way to accidentally dry them out, and a great tip to avoid doing so is to marinate them for a few hours in advance.

Finally, preparing pork chops on the grill is a delicious alternative cooking method that yields especially good results when adding barbeque sauce or a similar glaze.

To make pork chops on the grill, marinate the meat with seasoning ahead of time, then cook on a preheated grill over medium heat for 15-20 minutes, turning once.

Brush the barbeque sauce or glaze on the meat during the last 5 minutes of cooking to avoid charring.

Pork loin, on the other hand, is almost always prepared in the oven, which is where the term “pork roast” comes from.

As a general rule, a pork loin should be roasted at 350 degrees F for 25 minutes for every pound of meat.

Always check the internal temperature of the meat before serving, which should reach at least 145 degrees F.

A pork roast is undoubtedly more flavorful when seasoned and/or glazed, so be sure to apply a rub or a sauce beforehand.

Ideally, you’ll sear the pork loin on the stove before roasting to brown its outer layer. Baste your pork loin throughout the roasting process to keep it from drying out.

What Is Pork Shoulder?

Pork shoulder, as you may have guessed, comes from the upper shoulder of the pig.

As we noted above, it is rich in fat and connective tissue, which makes it especially apt for slow roasting and smoking.

Sometimes pork shoulder is also referred to as pork butt or Boston butt, which may be a bit confusing.

Pork shoulder often includes the shoulder blade bone, making it a blade pork roast. If the cut includes the lower part of the arm, it is referred to as an arm roast.

This well-marbled cut is most often roasted whole and is the perfect candidate for pulled pork, as its concentration of high fat and cartilage helps it to keep from drying out during extended cooking times.

Pork shoulder, much like pork loin, can be prepared in a variety of ways. Perhaps the most popular way is roasted or smoked whole, which can be done in the oven, a slow cooker, or a smoker.

Slow cooking your pork shoulder is the best way to make pulled pork. However, pork shoulder can also be cut up to be used in stews.

To roast pork shoulder in the oven, cook at 350 degrees F for 35 minutes per pound, uncovered.

To prepare in a slow cooker, cook on low heat for 6-8 hours, until the meat is tender enough to be pulled apart easily by two forks.

When smoking pork shoulder, preheat a smoker to 225 degrees F for indirect smoking and cook for 15-20 hours, or until the pork has reached an internal temperature of 195 degrees F.

Pork loin is by far the healthier choice when it comes to comparing the nutritional value of pork loin and pork shoulder.

Read on to discover the nutritional details of pork loin and pork shoulder.

While pork loin usually costs between $3 and $5 per pound, pork shoulder typically ranges between $1 and $3 per pound.

This price difference certainly adds up when buying large quantities of meat, so it’s something to keep in mind if the price is a big factor when selecting your pork.

Thanks for reading everything we thought you should know about the differences between pork loin and pork shoulder. Below we’ve answered all of the questions we most commonly get asked about these two portions of meat.

Can You Substitute Pork Loin For Pork Shoulder?

As you can see, we’ve noted a number of differences above that make pork loin and pork shoulder very different cuts of meat.

With that in mind, it’s usually not a good idea to substitute pork shoulder for pork loin in a recipe and vice versa.

If you try to roast a pork shoulder using the same method as a pork loin roast, you will end up with a very fatty piece of meat.

Additionally, if you try to smoke pork loin or use it to make pulled pork instead of doing so with pork shoulder, your meat will dry out rather quickly.

It’s best to stick with the cut of meat that a recipe calls for when cooking with pork.

How Do You Keep Pork Loin From Drying Out?

As we’ve mentioned, one of the most common problems when cooking with pork loin is drying out the meat.

As it has a relatively low concentration of fat, extended cooking times will not tenderize it but rather make it tough and dry.

To keep pork loin from drying out, you’ll want to avoid slow-cooking methods, such as a crock pot or a smoker. When cooking pork loin chops on the stove or grill, cook for the lowest amount of time necessary, between 6 and 10 minutes, just until the pork has reached an internal temperature of 145 degrees F.

If you soak your pork loin in brine or a marinade 2-6 hours before cooking, this will help to tenderize the meat and prevent it from drying out.

When roasting, periodically baste the pork loin so that it remains moist and doesn’t get tough.

What Is The Best Cut Of Pork?

Answering this question really depends on what kind of pork you like best.

If you’re a big fan of pulled pork, pork shoulder is the cut for you.

If you like your pork tender and juicy, turn to pork loin. When looking to roast a pork loin, buy bone-in, which helps to preserve the meat’s natural flavor.

Pork tenderloin, which also comes from a similar area of the body as pork loin but is a distinct cut, is another incredibly tender piece of meat.

But we can’t forget about ham, which comes from the pig’s back leg, pork ribs/rib roast, and, of course, bacon, which is cut from the side of the pig’s belly.

No matter what your preferences, there is a perfect cut of pork for everyone!

Up Next: The Difference Between Ham And Bacon