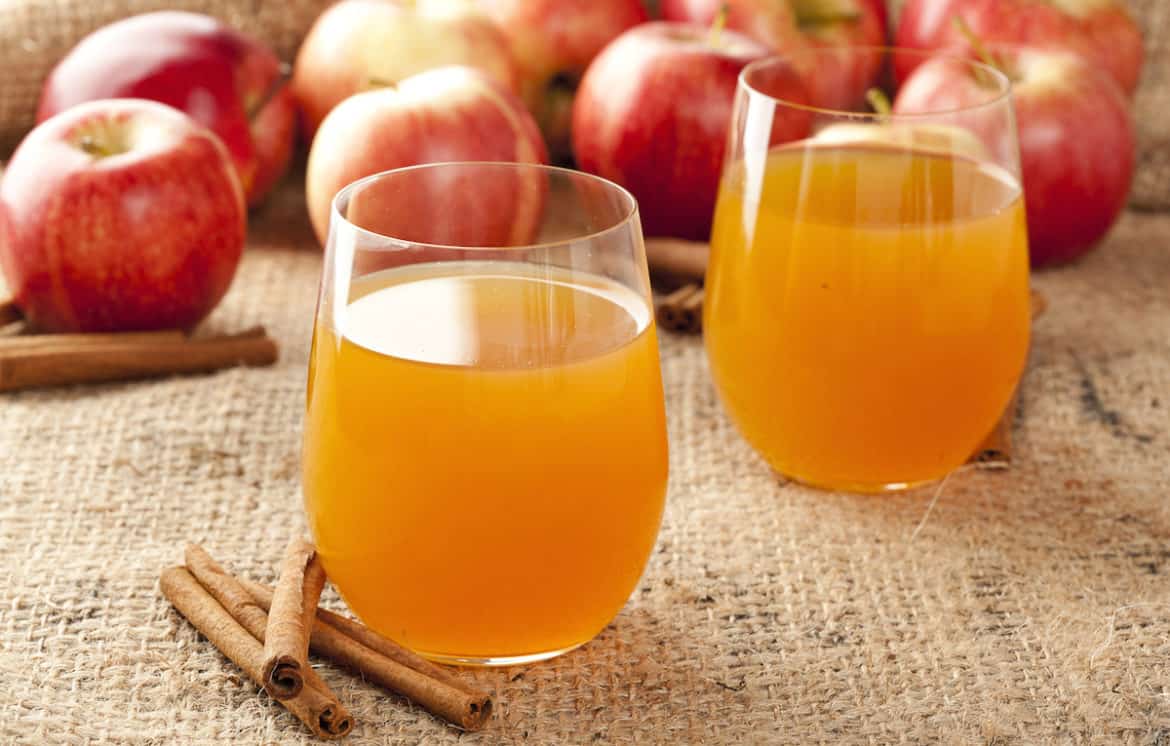 Apple cider has been a delicious beverage since the dawn of time and apple cider vinegar is often claimed to be a cure for everything from acid reflux to warts. They sound and smell remarkably similar and are made using the same base ingredients, but they are far from the same.

There is more to the story than that simple answer. In this article, we’ll look at the difference and similarities between a variety of apple products and answer all your questions about everything related to either apple cider or apple cider vinegar.

What is Apple Cider?

Fresh pressed apple cider is sometimes also called sweet cider, cider, or non-alcoholic cider, depending on where you live. It is made by collecting the juice from whole, crushed apples, minimally filtered and then pasteurized for safe consumption.

Each cider maker will use their own custom blend of apples to press and the may also add preservatives to keep their cider fresher, longer.

If you find a cider that is classified as a “varietal” this means the beverage is made using only one signature variety of apple, rather than a blend of apples.

However, if you find a drink labeled as an apple cider blend, it usually means that it’s been made using another fruit entirely, such as cranberries or raspberries.

Apple juice is also made by crushing, masticating or pulverizing apples to extract the juice from the flesh and skin of the fruit.

With cider, much of the pulp and even skin is left in the juice, which turns it a deep caramel color and adds a lot of heaviness to the final product. Apple juice is very finely filtered to create a liquid that is as thin and smooth as water.

When fresh apple cider is left to ferment, it becomes an alcoholic beverage. In Europe and some other countries, the mention of cider always implies an alcoholic drink unless specifically stated otherwise.

It is usually the opposite in the US, with most cider being of the sweet variety unless specifically stated as “hard,” or alcoholic.

What is Apple Cider Vinegar?

All vinegar is a fermented combination of water and acetic acid, but the acetic acid can be made from a variety of plants, including potatoes, rice, grains, or fruit.

Apple cider vinegar, or ACV, is made from fermenting apples into natural sugar alcohol and then adding bacteria to convert the alcohol into acetic acid.

My favorite ACV, and one of the most popular, is Bragg’s Organic Apple Cider Vinegar with “The Mother.”

White vinegar is a completely clear liquid whereas ACV is brownish. They have noticeably different flavors as well, with the apple version, not surprisingly, having a fruitier finish to it.

They’re both useful and healthy for a variety of cooking and edible purposes, and they’re equally beneficial as a disinfectant. Both products are often used topically for health purposes, but for home cleaning white vinegar is more popular mainly due to its much lower price-tag and less powerful odor.

In most cases, cider vinegar will have ACV as a base with another fruit as an added flavoring.

Apple cider vinegar has become so popular in the past decade that it’s used for almost everything now, similar to coconut oil. There are even memes and jokes that advise, “When in doubt, try ACV!” In all honesty, though, it can be very effectively used in a wide variety of situations.

Here are a few of our favorite, not so obvious uses for ACV:

Apple cider and apple cider vinegar both have health benefits, but for very different reasons, so it’s difficult to accurately compare and contrast the two products to say one is better or healthier than the other.

Instead, we’ll just take a look at their individual merits in hopes of convincing you that both are great additions to your daily life.

If you’ve been drinking apple juice all your life thinking it was healthy for you, it may be time to switch to sweet apple cider juice instead. Apple cider will have all the nutritional benefits of apple juice and also many more.

Apple cider is made using the pulp and some of the skin of the fruit as well which leaves you with more fiber and even more vitamins and minerals.

Commercial apple juice is also usually processed much further, either adding a lot of sugars and preservatives or at the very least putting it through a variety of procedures to make it more shelf-stable or long-lasting and robbing it of a lot of the nutritional value.

Apple cider goes through less processing and, though it won’t last as long, retains a great deal more nutrition.

Apples are very heart-healthy and great for your metabolism. These benefits transfer to both apple cider and apple cider vinegar, but when you’re drinking apple as a beverage, the cider version is much more palatable.

Since ACV has such a potent flavor and it isn’t usually consumed in large quantities, it’s more often used topically and has many benefits in this sense.

It’s very antibacterial, as already mentioned, and it’s been used throughout history for treating everything from lice, ticks, and fleas, to nail or foot fungus and warts. It can be used to clean any wound, and even to treat ear, throat and mouth infections.

ACV is naturally acidic as well, so it can help restore the pH balance of both your skin and your internal organs. If used topically, it can help improve skin conditions like eczema or psoriasis.

It can be irritating if used in too high of a concentration, so always be sure to dilute it with water or a skin-friendly oil and check with your doctor or dermatologist before using it for any serious skin conditions.

If you’re not sure how to use apple cider vinegar for consumption, I highly recommend Thomas Delauer‘s recipes on YouTube! Not only does he tell you how to make each beverage (he makes 2), but he also explains the science behind apple cider vinegar.

Halal is an Arabic word that means “permissible.” In Muslim culture, as well as many others, anything that has alcohol is strictly forbidden, so a hard apple cider would not be halal.

However, during the process of turning apple cider into apple cider vinegar, the alcohol is essentially eaten by bacteria, leaving the vinegar non-alcoholic and, under most authorities, halal.

There may be some strict religious officials who disagree, however, so if you’re concerned, it is best to confirm with the authority you trust the most.

There is a variety of research that suggests apple cider vinegar is good for weight loss, yes.

The acetic acid in the vinegar has been shown to improve your metabolism, lowering insulin and balancing blood sugar. This helps your body more efficiently burn fat and better regulate fat storage.

It may also send signals to your brain that turn off your hunger signals, which curbs your appetite.

Altogether, this is a good combination for healthy weight management.

Is white vinegar good for you?

White vinegar is often used as a key ingredient in many natural DIY home cleaning products, but it is good for your health? Yes, in fact, white vinegar has been shown to have a variety of healthy benefits.

In ancient and traditional medical practices, it’s anti-microbial properties have been very useful in treating wounds and infections, and when taken internally, it has been shown to help manage blood sugar, reduce cholesterol, and even help with weight loss.

It’s often used in making pickles, as a condiment or in salad dressing, to make mustard, as an ingredient in marinades or cooking sauces, in various baking recipes and even in the cheesemaking process.

Up Next: Does Hard Cider Go Bad?

Can You Freeze Eggnog? – The Best Way

The 5 Best Substitutes For Orange Extract

Cellentani Vs Cavatappi – What’s The Difference?