The Best Vegetables For BBQ 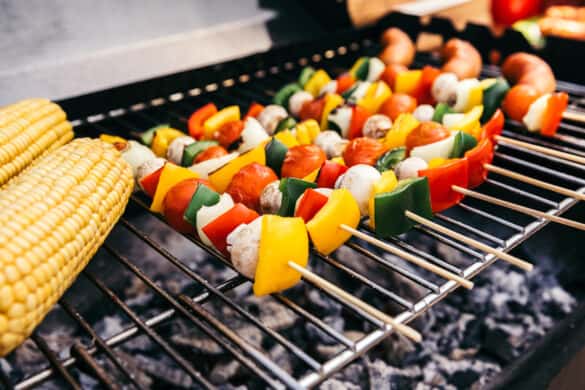 We like to believe every season is BBQ season. Nothing says life is good like the heavenly aroma of smoky goodness.

While meats are, granted, mouthwateringly delicious on the grill, vegetables take on a whole new level of greatness on the BBQ, too. Smoky flavor and grill marks enhance any veggie, but certain vegetables just seem made for the experience.

Which vegetables are best for barbecuing? Most vegetables do well on the BBQ, but vegetables with sweeter flavors, such as carrots or corn, or semi-firm textures, such as bell peppers and mushrooms, tend to do especially well. Vegetables with higher water content are not as popular, but some, like tomatoes and squash, still do well.

In the rest of the article, we’ll share some quick and easy tips for perfectly BBQed vegetables every night.

It’s hard to find a vegetable that doesn’t taste amazing after it’s been barbecued, but there’s something special about the 11 on this list.

So let’s get into the best of the best!

Corn on the cob is probably the most commonly grilled vegetable in North American, partly because of the delicious results but also because it’s just so easy.

You can leave it covered in the husk for a smoky steamed corn, you can get grill marks on it for an ultimate BBQ flavor, or you can rub it with olive oil to pull out some of the sweetness for corn that practically melts in your mouth.

There’s no wrong way to make BBQ corn on the cob!

Portabello mushrooms are naturally woody and when you add the smokiness that results from the BBQ and possibly even a dash of liquid smoke, they turn into one of the meatiest, most satisfying vegetables that you could grill up. Yum!

Remember to wipe the outer caps clean, snap off the stems and gently scrape out the gills. This will leave you with only the “meat” of the mushroom and it won’t turn a weird black color that has nothing to do with grill marks.

Place them directly on the grill for about 4 minutes each side. They grill fast!

If you want to BBQ white or brown button mushrooms, skewers come in handy. Clean them well, then layer them onto a skewer. Rotate them in a high heat area of the grill for about 5 minutes or according to your preferred texture.

With this method, they get softer and chewier the longer they cook.

The easiest way to BBQ bell peppers is whole. Char them on all sides for 3–4 minutes until they’re completely blackened and then toss them into a bowl covered with a lid, plate or towel.

Let them steam for 10 minutes or so. Then carefully remove the stems and seeds (they’ll practically fall out of the pepper) and pull off the peeling.

You’ll be left with sweet, smoky fire-roasted peppers that you can eat immediately preserve in a marinade for use in salads, sandwiches, and anything else you can think of.

You can also quarter and clean your peppers and grill them for only 3–5 minutes to eat right away.

Our favorite way to BBQ summer squashes like zucchini, yellow squash, and eggplant is to slice them lengthwise into strips about ¼ inch or ½ thick.

Paint them with olive oil and season them well then lay them on directly on the grill for about 3 minutes on each side. The salt pulls the moisture out and you’ll develop a smoky edge to your slightly sweet veggies that can’t be beaten.

Grilling asparagus is almost as easy as corn on the cob.

We highly recommend coating them lightly with olive oil and adding some herbs and seasoning. Just place them directly on the grill for 4–6 minutes, turning once halfway through.

This method also applies to broccoli rabe or broccolini, though the stalks are a bit tougher so you should add an extra 2 minutes of cooking time.

Simply slice onions into rounds but don’t separate the rings. Place directly on the grill for about 5 minutes, flip and let the other side cook for another minute or two.

This method also works really well for cabbage, though it takes longer to cook.

There are plenty of different kinds of tomatoes but our favorite type for the BBQ is a cherry or grape tomato. Threaded onto a skewer and grilled for 5–7 minutes until they’re sweet, tender, juicy, and heavenly.

If you want to grill a larger tomato, like an heirloom, beefsteak, or even a Roma, try halving or quartering it and placing it directly on the grill.

Leaving the skin touching the grill will help keep them together while still sending enough heat through the piece to cook them and bring out the natural sugars.

Grilling brings out the natural sweetness of carrots, caramelizing the sugars. It works nearly the same for parsnips and turnips. A grill basket comes in handy for carrots because they’re outer layer gets a bit delicate for the grill as it cooks.

You can place it directly on the grill, but you’ll want to keep them crisp this way.

They’re one of the veggies that take the longest to cook, around 10–12 minutes. Using maple syrup as a glaze is a brilliant idea, especially with a tiny bit of cayenne pepper.

Green beans can be tricky because they fall through the grill easily, but they’re worth the effort. A great solution is to take a portable grill and place it on top of your standard grill plate, so the holes are opposite each other. This way the beans won’t fall all the way through to the coals.

Trim your beans before grilling and toss with some olive oil and lemon juice, it brings out the flavor of the beans. They’ll grill perfectly in about 5 minutes, turning optional.

You can use this method for snow, sugar, or snap peas as well as edamame whole in the shell.

Grilled romaine lettuce became a huge BBQ trend a few years ago and it seems to have cooled off a bit, despite the continued goodness of the grilled lettuce.

Kale has become a bit more of a superstar, but grilling almost any leafy green is a culinary delight.

Something happens to green leaves when they’re cooked at such high temperatures – they lose all their bitterness and become melt-in-your-mouth wisps of buttery crisps.

If you’re working with an entire head of lettuce, like Romaine, simply quarter it, baste it with olive oil, season as desired, and grill until charred, about 5 minutes.

If you’re grilling individual leaves, keep them in rather large chunks so that they don’t fall through the grill. Massage some oil into the leaves and season and then place them directly on the grill.

They’ll sizzle and even pop, but leave them where they are for at least 3 minutes. Carefully using tongs, flip them over and let the other side char just for a quick minute, then pull them off.

Cook collard greens the same as kale and butter lettuce bok choy and endives like Romaine. You can grill beet greens, Swiss chard, and other lighter greens as well, but don’t cook them as long as the tougher leaves.

Roasted garlic is often done in the oven or a toaster oven, but done on the grill brings a smokiness to the creamy garlic mush that will make it much too easy to eat an entire bulb of garlic in a single sitting.

All you have to do is slice off the top of the entire bulb, place it on a piece of aluminum foil and drizzle with olive oil. Wrap it up well and place it on the hot grill, with indirect heat for about 40 minutes.

Now that you know what to go for, you need to be sure you grill your veggies perfectly. Can’t risk wasting a precious bite!

Here’s a handy reference for the best average grill times and methods for your BBQ veggies:

You can make a delicious marinade using olive oil, a bit of lemon juice, some salt, and any herb or spice that is your favorite.

We love garlic, basil, rosemary, thyme, and a few hot chili flakes for good measure, but you really can’t go wrong with any dried herb.

The secret is less in what you put in the marinade and more in when you use it. Raw veggies tend to be quite resistant to soaking up liquid ingredients. Grilled vegetables, however, are like flavor sponges.

Instead of marinading your vegetables before you grill them, baste them when they’re about half cooked.

Pour the remaining marinade over the top after they’re done to let them soak up all the flavor in replacement of the water they lost through cooking.

What Are the Best Skewers For BBQ Vegetables?

You can soak bamboo skewers and use them quite effectively on your BBQ, but we’re partial to reusable, easily cleanable metal skewers.

You need to watch your fingers because they will get hot, but they’re very convenient and they’re specially designed so that your food, no matter what veggie you’re grilling, doesn’t slide off.

Our favorite is the V-Shaped set by Grillmer.

How Do You Grill Vegetables in the Oven?

Not having a BBQ should never deny you of the goodness of barbecued vegetables. For that matter, grilling them in your oven works well in the winter, when you’re not so inclined to fire up the outdoor grill in any case.

To grill vegetables in your oven simply use the broil setting. There is a difference between grilled and roasted, and the broil will give you a quick scorch, leaving plenty of crunch compared to slow-roasted veggies.

Keep your eye on your vegetables closely and turn once they start to blacken a little bit. You can rotate just once or multiple times as required.

The Best Crackers For Hummus