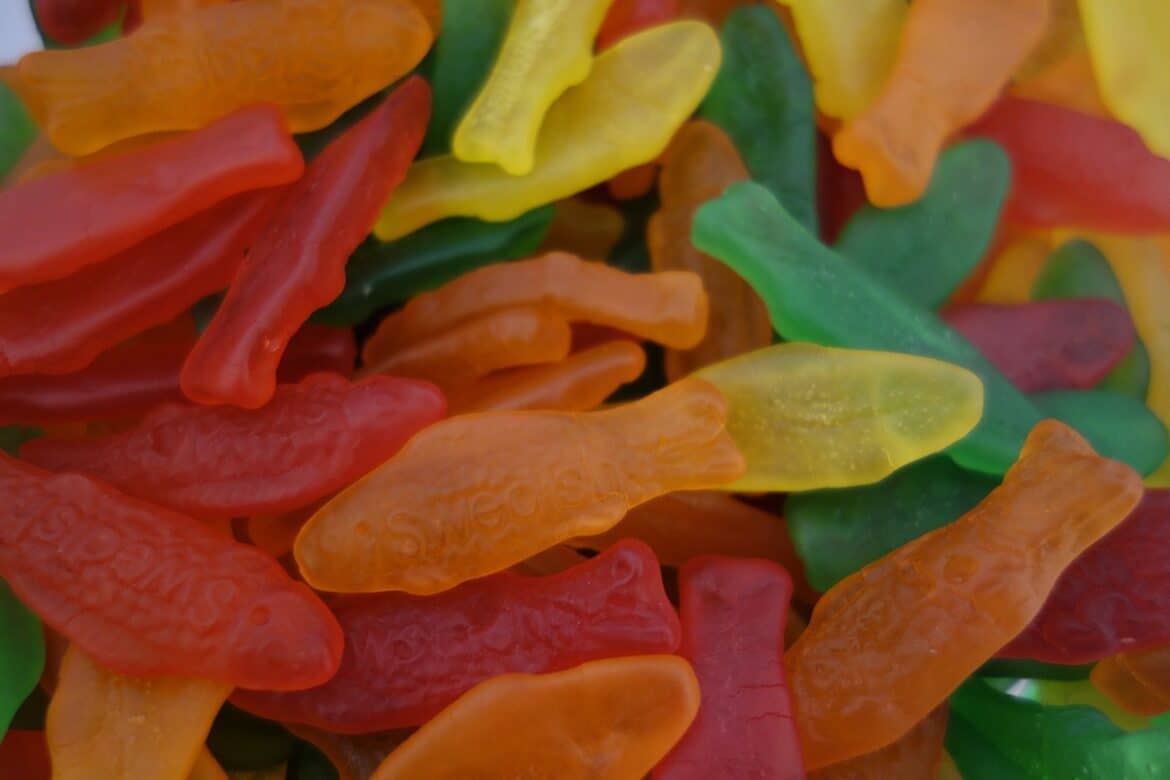 With the rise in veganism, more and more people are looking for vegan products, especially candies. Unfortunately, there aren’t so many available and a lot of their ingredients are questionable.

Swedish Fish specifically is an extremely popular candy around the world, but there is some debate regarding its vegan-friendliness.

So, are Swedish Fish vegan? In general, most Swedish Fish products are vegan. The variety sold in peg bags, however, does include beeswax, so when purchasing Swedish Fish, make sure to look at the ingredients to determine whether or not it’s vegan or vegetarian.

What Are Swedish Fish?

Swedish Fish is a type of chewy fish-shaped candy originally made by a Swedish candy maker called Malaco.

Since the 1950s, many other companies have started making them and they can be found in most parts of the world.

What makes this candy unique is its very specific flavor. The original color it was produced in was red and has a flavor called lingonberry (a type of European berry). In other parts of the world, this red flavor is considered to be a type of berry or cherry.

Today, many more flavors and colors have been introduced into the range. The yellow candies are lemon-flavored, the green ones are lime, the purple is grape flavored, and lastly, the orange ones are orange-flavored!

There are also a few varieties of products within the Swedish Fish range.

Ingredients Used To Make These Candies

So, the easiest way to determine whether or not these candies are vegan is by checking the ingredients list.

Of course, different brands will have a few differences in ingredients, but the base ingredients should be the same across the board.

First, we want to mention that there are two different types of Swedish Fish commonly available. These are regular Swedish Fish and peg bag Swedish Fish (the ones in the hanging bags).

Sugar is naturally the first and almost main ingredient used to produce candies and these Swedish Fish are no exception. Sugar adds sweetness to candy as well as texture.

The process of candy making is very complex, but to achieve a specific texture like this chewy one, the sugar is melted to a certain temperature, and then cooled so that the crystals align in a certain way.

This gives it a chewy texture, compared to hard candies that use different temperatures.

Carnauba wax is also used in both candies. This is a type of wax obtained from the leaves of a Brazilian palm plant, so it is vegan.

The main difference between the two types of Swedish Fish you find is that regular candies use white mineral oil whereas peg bag candies use palm kernel oil and beeswax.

So, Are They Vegan?

If you look at the ingredients list, you can immediately see that peg bag Swedish Fish isn’t vegan because of the beeswax used in it. Beeswax is an animal-derived product, so is immediately excluded as a vegan-friendly product.

The regular Swedish Fish however only contains plant-based products and is generally considered vegan.

The other flavored and colored Swedish Fish are also considered vegan and use the same ingredients as regular Swedish Fish candies.

So, make sure to always check the packaging to make sure that the specific candy you grab is vegan. You can simply check the back of the packet at the ingredients used.

Are The Colorants Vegan?

Again, it depends on the brand you have. Check whether or not the candies contain beeswax to make the initial determination whether they are vegan or not. If they have beeswax, they aren’t vegan.

Then you can look at the colorings used for the different flavors. Most flavorings for candies are plant-based (like grapes, oranges, lemons, limes, and berries) so you do not have to worry about those being vegan or not.

Red 40, the color used for the original Swedish Fish, is often confused with the Red 4 coloring. Red 4 is obtained from beetles, whereas Red 40 is obtained from petroleum (don’t worry, it is still food safe) and even strawberries.

Moving on to the other colors, Tartrazine (Yellow 5) and Sunset Yellow (Yellow 6) are both also petroleum-derived colorings and therefore are both vegan friendly. Interestingly enough, Yellow 6 can also be obtained from strawberries.

For different colors such as orange, green, and purple, the three primary colors are mixed to create the correct shades – very much like painting!

Where Does The Controversy Lie?

So, even though you can see from the ingredients listed above that all of them are vegan, there are some deeper concerns regarding a few of the ingredients within the vegan community.

These ingredients include sugar, palm oil, colorants, and flavorings.

A shocking fact we recently learned is that some sugars are processed using bone char. The bone char helps give the cane product its pure white color.

Despite the sugar itself not having any bone char in it, it is the processing method that is frowned upon and that sparks the debate.

Many vegans believe that regular granulated sugar cannot be considered vegan if it uses animal products in the processing.

However, not all cane sugars (or even other sugars) are processed with bone char. In general, the packaging will say organic, unrefined, natural, or raw to indicate that a sugar is completely vegan.

Unfortunately, the precise types of sugar for Swedish Fish are unknown.

The next controversial ingredient is palm oil or fat. Again, the ingredient itself is vegan, but the way it is obtained is not considered environmentally friendly and does have devastating impacts on animals.

This goes against vegan beliefs, so like sugar, it isn’t always considered vegan. There are many palm-based products, especially recently, that state it has been obtained organically or labeled as “responsibly sourced”.

This is a good indication that the ingredient was obtained ethically.

Food coloring is often considered non-vegan because it is tested on animals, another obvious clash with vegan beliefs.

Again, it isn’t specified exactly what food colorings are used (in terms of brands) and whether or not they are vegan. Although, many people do believe that if the coloring itself doesn’t contain any animal or insect products, they are vegan.

If products contain animal-based flavorings, those must be specified on the packaging by law.

Personally, we believe that regular Swedish Fish are vegan when you look at their ingredients used.

Of course, there will always be some argument as to why a product isn’t vegan-friendly; however, if you strictly look at whether or not it contains animal-derived products, it does not.

They also don’t contain any gelatin-like most other soft candies, and also don’t have any egg albumen.

Always check the packaging to make sure that you don’t grab a brand that uses beeswax. These products aren’t vegan.

Now that we’ve gone over whether or not Swedish Fish are vegan, let’s take a look at some related questions on the topic!

What are some Swedish Fish substitutes that are vegan?

Like we have mentioned, regular Swedish Fish candies are vegan. Other chewy and gummy vegan candies include Twizzlers, Dots, Air Heads, and Jujubes.

Both the regular Swedish Fish as well as the non-vegan option are considered vegetarian. Most vegetarians only exclude animal meat or by-products like eggs and milk.

Beeswax is a controversial vegetarian ingredient; however, most vegetarians still include honey in their diet, so beeswax shouldn’t be any different.

Despite being labeled as kosher, these candies haven’t been officially certified as kosher. Make sure to check the label for any certifications, or simply decide for yourself whether you still want to consume it or not.

Swedish Fish are completely gluten-free and don’t contain any gluten products. There are candies that use gluten-based thickeners to help achieve a certain texture which is why there are some concerns regarding these.

Up Next: How To Tell If A Mango Is Bad

How To Tell If A Mango Is Bad – The Ultimate Guide