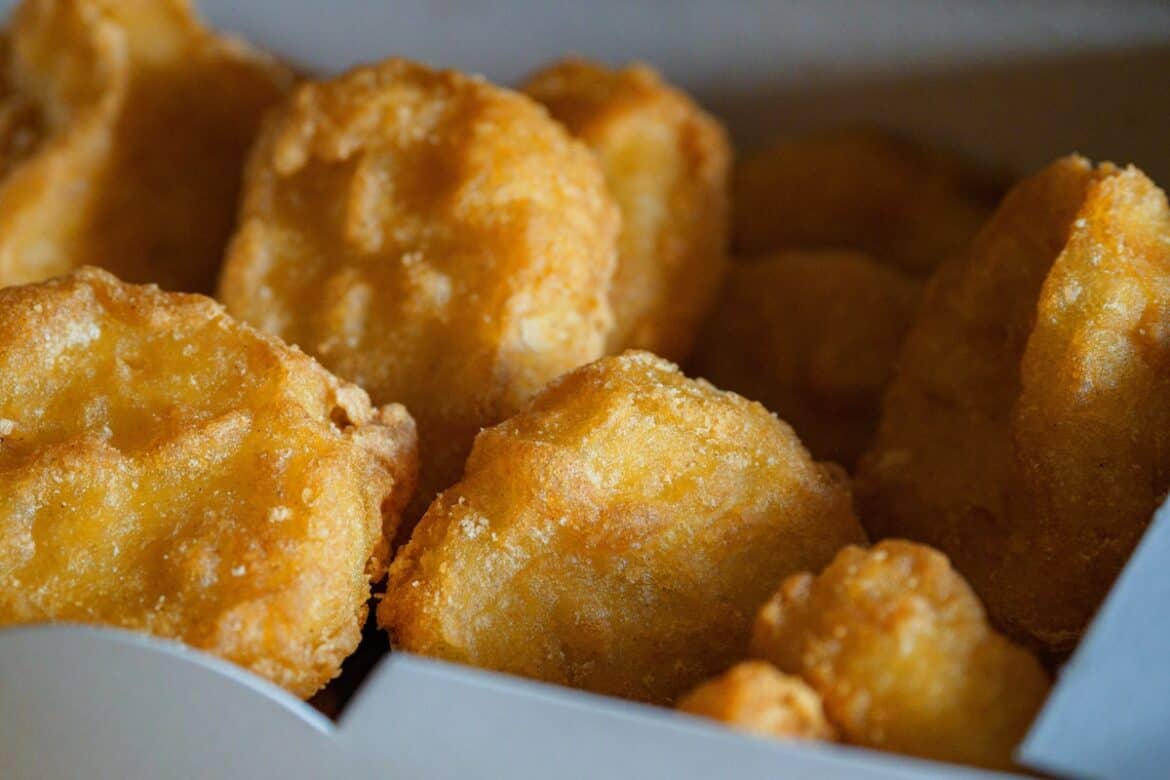 There’s nothing like tearing into a pile of chicken wings with your friends as you drink a cold of pint of beer and chat away with a show or sport playing in the background.

Whether you like your wings screaming hot, salt and peppered, or covered in sweet and sour sauce, there’s something for everyone!

Unfortunately, you may be disappointed to learn the truth about boneless chicken wings.

Read on to discover more about how chicken nuggets and boneless chicken wings are made, how they are served, and whether there is any difference between them!

What Part Of The Chicken Are Boneless Chicken Wings Made Out Of?

While you may think that boneless chicken nuggets are made from the wing meat of the chicken with the bone removed, you have been misled by clever marketing.

Boneless chicken wings are actually made from chopped-up and compressed chicken breast meat.

This meat is then battered and deep-fried and called a boneless chicken wing. However, they are basically the exact same thing as a chicken nugget or a chicken tender, which are also boneless chicken snacks made from breast and other meat.

While they may be easier to eat, boneless chicken “wings” certainly don’t have the same flavor. Wing meat is dark meat that is rich in fat and collagen, while chicken breast tends to be lean and low on the flavor and fat side of things.

While still tasty, they should not be classified as wings, since there’s barely a whisper of wing meat in any boneless chicken wing found at your typical chain restaurant.

What Part Of The Chicken Are Chicken Nuggets Made From?

Chicken nuggets are a little more honest about what they are: nuggets of chicken. While typically they are made from ground-up chicken breast that is battered and fried, other parts of the chicken can make their way into your nuggets as well.

It isn’t uncommon for nuggets to be made of a combination of white and dark meat, tendons, ligaments, bones, nervous and connective tissues, and fat. These chicken parts are ground up and formed into little nugget shapes.

While you may be flinching to see what goes into your chicken nugget, all these different parts of the chicken actually add flavor and texture. As you can see, boneless wings and chicken nuggets are actually pretty much the same thing.

In fact, nuggets may even be more likely to have wing meat in them than so-called boneless chicken wings.

How Are Boneless Chicken Wings And Chicken Nuggets Made?

When it comes to how boneless chicken wings and chicken nuggets are made, there isn’t really too much of a difference.

Both products are made of ground-up chicken meat, typically the breast, though there may be some other bits thrown in there such as tendons, bone, fat, and dark meat.

The chicken is ground up and pressed into specific shapes that are designed to be eaten in one or two bites, so they are easy to eat. They’re also not as messy as chicken wings, since you don’t have to pull the bones out to enjoy them.

Once the meat has been pressed into shape, the boneless chicken wings and chicken nuggets are battered. Sometimes the batter is plain and sometimes you might get a buffalo or other flavoring added in.

Finally, after the nuggets are ground, shaped, and battered they can be packaged up and shipped out.

When they arrive at their final destination, be that a commercial kitchen or your very own home, they are typically fried up nice and crispy and enjoyed with a variety of dipping sauces.

As you can see, the only real difference between chicken nuggets and boneless chicken wings is the marketing that goes into them.

While chicken nuggets are often marketed towards children, boneless chicken wings are a way to capture the adult market by dressing up a nugget as a wing.

Regardless, both boneless chicken wings and chicken nuggets are delicious and the perfect vehicle for a variety of sauces. But if you’re looking for chicken wing meat, then you’re better off ordering real, bone-in chicken wings, mess and all.

How Do You Serve Boneless Chicken Wings And Chicken Nuggets?

The main difference between chicken nuggets and boneless chicken wings is their marketing.

Adults love a chicken nugget, but perhaps don’t want to be seen ordering something so childish when they’re out to eat. That’s where the boneless chicken wing comes in!

You can order a more mature, nuanced dish like chicken wings, without the hassle of actually having to eat a chicken wing.

Typically they will be served like wings, coated in sauce, or served with dipping sauce, celery, and carrot sticks on the side (don’t forget the ranch dressing)!

Chicken nuggets, on the other hand, will typically be served with fries as part of a meal.

You will likely be given sweet and sour sauce, barbecue sauce, or ketchup to dunk your nugs. Depending on the restaurant the shape of the nugget and the boneless chicken wing may differ slightly.

But when it comes down to it, both are served with dipping sauces and both are made of chopped and compressed breast meat that has been battered and, typically, fried.

So if you’re out at a restaurant and you have a craving for nuggets, but only see boneless wings on the menu, or vice versa, feel free to order whatever is available. You can always ask for sauce on the side and an order of fries.

What Are The Different Parts Of A Chicken Wing Called?

If you are looking to make your own chicken wings at home there are a couple of types you can use.

When you see a wing on a chicken, you’ll notice that it comes in three distinct parts. Two of these parts are easily edile, while the third is likely best saved for bone stock.

If you want to make your own wings at home, I suggest picking up a selection of both drumettes and wingettes so that you can try both types.

I like doing a simple oil, salt, and pepper coating then roasting them at a high temperature so they get crispy on the outside.

With air fryers now on the scene, you can make amazingly crispy and delicious chicken wings quickly and easily right at home.

How To Cook Chicken Wings In An Air Fryer

To make crispy, crunchy chicken wings in your air fryer right at home, follow these steps.

Up Next: Pasta Left Out Overnight – Is It Still Safe?

Pasta Left Out Overnight – Is It Still Safe?

Can You Freeze Papa Murphy’s Pizza?