Home Foodsguy Alfredo Vs Carbonara – What’s The Difference?
FoodsguyThis vs That

Alfredo Vs Carbonara – What’s The Difference? 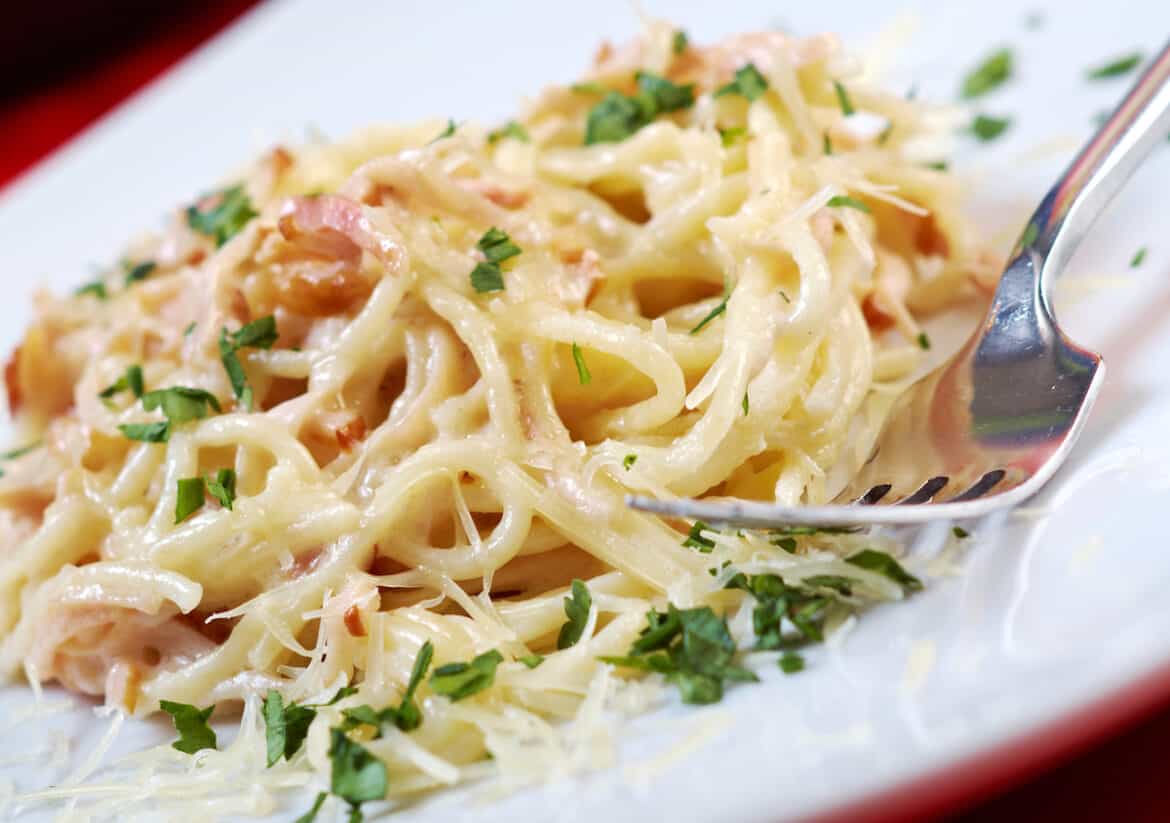 Americans love their rich and creamy pasta sauces as much as Italians do, however, we’re a little less clear on the traditional ingredients list for many of our favorite dishes.

Have you ever found yourself faced with deciding between alfredo vs carbonara, but not really knowing which is which?

What’s the difference between alfredo and carbonara? Alfredo is a rich sauce derived from butter and parmesan and is traditionally served with a classic, egg-based fettuccine. Carbonara sauce is traditionally made with eggs, parmesan, and cured pork called guanciale. It is served over a plain flour-and-water spaghetti. Both are white sauces.

They are both simple, rich white sauces served over long pieces of pasta, but they are made and – traditionally – served differently. American versions of alfredo also use heavy cream and parsley.

Both sauces are simple to make at home if you know what you’re doing. This article will discuss best practices for making either sauce and the right ingredients to choose for each.

What is Carbonara Sauce?

Carbonara sauce is a very classic, traditional recipe that traces its roots back to peasants in Italy who usually had some form of cured pork, could make cheese on demand, and would put eggs in their sauce if they were available.

Though carbonara is thought of as a rich and creamy sauce, a classic recipe will not call for cream. Some recipes will add a splash of cream at the end of cooking and others make it with heavy cream, ignoring the rules of tradition entirely.

If you refuse to add cream, using very fresh eggs will be important and you can also use the starchy water from your pasta to thicken the sauce slightly.

There is more controversy surrounding the idea of adding garlic or onions. The more strictly traditionalist the chef is, the less likely they are to add these extras to the sauce, as they are not the traditional Italian method.

Grated cheese, usually parmesan or pecorino, eggs, and pork fat are all this sauce needs, with plenty of black pepper to cut through the richness.

What Pasta to Use for Carbonara?

Spaghetti is the most common pasta used for carrying carbonara sauce. The story is that, because it’s a “peasant dish”, the originators of the sauce would not have been able to afford the pricier egg pasta.

If you want a change from spaghetti, you can use any flour-based pasta, but it won’t be considered classic.

In more modern Italian restaurants and recipes, simple bacon is often used as the meat in carbonara. If the chef is feeling fancier, they may opt for pancetta, which is cured pork belly but not smoked, like bacon, which gives the sauce a simpler, cleaner flavor.

If the chef is adhering to a more traditional recipe, they will use guanciale. Guanciale is cured pork cheeks and neck. It’s sometimes called jowl bacon, though that’s a much less appetizing name.

Guanciale is very popular in Italian cuisine but it’s only recently starting to catch on in North American homes, so it’s not easy to find.

The flavor is much stronger than that of bacon because the meat is dry-cured and then aged, rather than cold smoked, which intensifies the flavor.

Because this dish was originated as a peasant dish, there were many ways to make it, usually depending on what the “peasant” had on hand at any given moment.

That means there’s room for individualization, but we’ve tried to stay as true to tradition as possible for this classic sauce recipe.

Carbonara will take a bit longer than alfredo to make because you have meat to cook. Expect to spend about 30 minutes creating this meal from scratch.

Carbonara is made for spaghetti, so if you prepare your sauce while your pasta is cooking, it may even be a little bit quicker. If your meat is purchased pre-cubed and your parmesan is pre-shredded, that will also save a few precious minutes in the cooking process.

Making carbonara is very simple. First, the meat gets sautéed until it’s golden and crispy and simmering in it’s fat.

The traditional recipe calls for guanciale, but if you don’t have access to this specialty pork cut, pancetta is a close match and available in most grocery stores. If you prefer bacon, try to find thick slices to cube.

You don’t cook your egg as you might normally expect with carbonara. Instead, you whisk your eggs until their well-blended and then you toss in your parmesan and mix that until it’s integrated into the egg.

If you get your timing right, your pasta and your fried meat should be cooked around the same time.

You can add some of the starchy pasta water to your meat pan along with the spaghetti. When it’s simmering hot again, remove it from the heat and immediately add the egg and cheese mixture.

The heat from the cooked pasta, leftover pasta water, and fried meat is what actually cooks the egg and creates the thick, creamy finish.

Of course, you can’t forget to season with salt and black pepper but if all goes according to plan your meal will be made and ready to serve within half an hour.

The origin of alfredo is a bit of a contentious debate. Some believe it is an American interpretation of an Italian dish, and others believe it’s an Italian sauce that has been adopted by Americans. Most agree that it is a combined effort between Italian and American chefs.

In Italy, the dish is usually made without cream, though Americans wouldn’t imagine leaving out their key ingredient.

Alfredo is a simple, rich, and creamy white sauce, which it has in common with carbonara, but it is made entirely differently. Butter is the main ingredient, supported by parmesan and, in some recipes, heavy cream and fresh parsley.

What Pasta to Use for Alfredo?

Fettucine alfredo is the most common preparation for this sauce. Alfredo is so common in North American kitchens, however, that it has been used to top almost every shape and size of pasta you can imagine. Just don’t tell the Italians.

What Meat to Use for Alfredo

A simple, classic alfredo sauce doesn’t demand any meat at all, though it’s not unusual to see some added, particularly in the United States.

Chicken breast is the most common meat addition to alfredo sauce, though shrimp is also popular.

Some people will add ground beef to their alfredo sauce, often with a Tex-Mex spice combination, but we would argue this changes the sauce too drastically to still be called alfredo.

While it’s very easy to pick up a jar of alfredo sauce while your grocery shopping, making this sauce from scratch is not difficult and the quality difference is noticeable, so we encourage you to give it a try, at least once.

If you’re cooking a traditional, easy alfredo sauce recipe, your meal could be ready for the table within 15 minutes. Of course, if you’re going to add meat it might take longer to make sure it’s cooked thoroughly, especially if you’re working with chicken.

Similar to the carbonara sauce recipe, if you time your cooking perfectly, you can make your sauce while your fettuccine is cooking. Not only will you save time, but you’ll serve it at peak freshness.

Alfredo is very simple to whip together.

While your fettuccine is boiling, heat butter and heavy cream – or without heavy cream – in a large saucepan until it boils. As soon as you see bubbles forming, reduce the heat to low and whist continuously to prevent the milk from scorching to the bottom of your pan.

Whisking continuously will also help the sauce thicken more quickly because it allows more water to evaporate. It also protects the sauce against a skim setting of the surface of your sauce.

Once your pasta is perfectly al dente, drained, and rinsed you want to remove your alfredo sauce from the heat. It should be nicely reduced by now and you can work in your parmesan. Sprinkle it in and stir until it melts and is smooth.

If you’re using parsley, mix that in well before adding the pasta.

Everything gets combined minutes before it’s served and it can all be created within 15–20 minutes.

We hope that you find this guide to the differences between alfredo and carbonara sauces useful. We also invite you to review these related questions for some additional information.

Difference Between Fettuccine and Linguine?

Fettuccine and linguine pasta are often confused for each other, both being long, flat noodles. Fettucine is an egg noodle that is wider and thicker than linguine. Linguine is a similar shape, though less substantial and made simply with flour and water.

Because it is a finer pasta, linguine is well-suited to light sauces that are oil or tomato-based. Fettuccine is a heartier noodle and can stand up to rich, creamy, and heavy sauces like bolognese or carbonara.

Can I Make Alfredo Spaghetti?

Alfredo spaghetti doesn’t have quite the international-sounding flair that fettuccine alfredo has, but yes, you can make it quite successfully if spaghetti is the pasta you have on hand. Depending on who you ask, though, it may not be considered true alfredo, strictly speaking.

Spaghetti is a rod-shaped pasta that is made from simple flour and water, much like linguine, so it has a more difficult time standing out with a heavy sauce like alfredo, but as long as you don’t overcook the noodles, the flavor will be similar.

What’s the Difference Between Boscaiola vs Carbonara?

Boscailola is very similar to carbonara and alfredo, but its signature ingredient is porcini mushrooms. It can be made in bianco, with heavy cream, or in rosso, which is a tomato-based sauce.

Either way, the flavor of mushrooms is what makes it stand apart from all other creamy sauces. It’s usually served with tagliatelle pasta.

Up Next: Can You Reheat Carbonara?

How Long To Smoke Chicken – The Ultimate Guide

The 5 Best Soy Sauces For Sushi