Home Foodsguy The Difference Between Ham And Bacon
FoodsguyThis vs That

The Difference Between Ham And Bacon 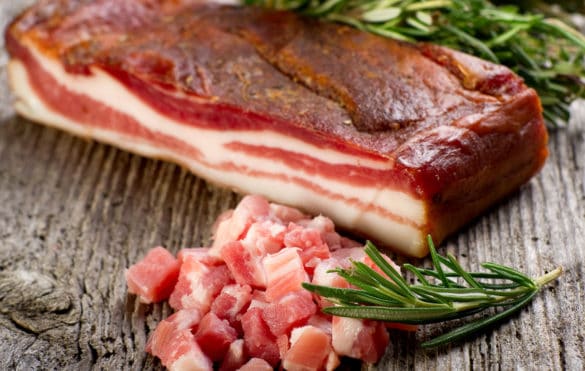 Awwww pork – one of the most flavorful meats available. Pork is one of those meats you either love it or you don’t. Of course, there are also people who are unable to eat pork for various reasons and that’s quite alright too.

Or maybe you are the person that loves bacon but doesn’t care for sausage or some other cut of pork. There are a lot of pork cuts that vary greatly across the board. It ranges much more than just bacon or sausage. We also know ham, pork chops, pork steaks, and the list could really go on and on.

In this guide, we will walk you through the similarities and differences between ham and bacon. We will detail and explain each one individually and then to simplify the comparison we will come back and provide you with a summary overview for a quick reference of how these differ.

Keep reading to find out the differences between ham and back and so much more.

Understanding the Differences Between Ham and Bacon

Ham and bacon are not the same things. They are both forms of pork and they both come from a pig but that is about where the similarities end when you think about it.

Ultimately, what you need to know about these two types of meat is that they are various forms of pork. Pork comes from domestic pigs and can be cooked or preserved in various ways.

Some forms are cured and treated while others are made into fresh cuts that can be frozen or cooked from the state they are in.

There are tons of varieties of pork. Here are a few to give you an example.

As you can see, there are many ways that pork can be enjoyed. This does not even cover all of them but it does cover the most common and the most well-known.

In this guide, we will be focusing on ham and bacon and discussing how these two cuts of pork can be similar or different.

We will walk you through each one, detailing what you should know about that cut in particular and then we will trace back and summarize the differences to provide you with a simple reference when you need it.

Ham is preserved after it has been cut through a process known as curing. Curing can happen in various ways. It can be wet or dry.

Curing can also include a smoking process or can skip the smoking process. There are numerous ways but essentially, the end result is that the ham is cured by some means.

Ham can also come in various sizes and cuts. It’s quite possible to purchase the full ham in a whole cut or to find other means that have been formed into something else. There are ham steaks, sliced ham, ham shanks, ham legs, and even deli-sliced ham for lunchmeat.

This is just the surface of working with ham. Let’s talk about some of the things you can do with ham.

There are literally tons of things you can do with ham. You can make various things with ham once it’s been cooked. If you make a large ham, then you know that there may be a multitude of leftovers.

So what are some things you can make with ham, aside from just having the whole baked ham?

Here are a few ideas for you.

There are many different things you can use your ham for, these are just a few ideas for putting that ham to use. With all these options, you certainly have no excuse for getting tired of your ham once you made a large ham and have an abundance of leftovers.

Ham can be cooked in so many ways. When you purchase a ham from the store or from a local butcher, or even if you have your own pig butchered and processed, ham is easy to store and work with.

You can initially cook a ham by smoking it, baking it, or even making it in a crockpot or instant pot-type device. We’ve already covered uses for the ham after you’ve cooked it.

There are also multiple ways you can store your ham. It can be refrigerated or frozen. The processes for preserving your ham are quite simple.

Bacon is quite a bit different than ham. Rather than being a large cut that is often sold as one large piece, bacon is made into its own unique thing before ever even leaving the processing plant or butcher’s care.

Bacon comes cut in strips. The strips can be cut in various thicknesses and they can be prepared in various ways as well. They can be smoked and cured with different underlying flavors. You might find it in multiple varieties and cuts.

There are a lot of uses for bacon. For starters, it’s great by itself and once it’s cooked you can eat it hot or cold. Bacon tends to produce quite a bit of grease during the cooking process.

Bacon can be cooked in the oven, on the stove, in the microwave, or even on a griddle or in an air fryer. It’s quite versatile.

There really is hardly ever the question of having leftover bacon. You can make as much or as little as you want. However, there are still a LOT of things you can do with bacon.

Here are a few ideas.

You really can’t tire of bacon.

In addition to the multiple ways you can prepare your bacon, there are also many ways to store bacon as well.

Bacon can be stored and preserved in the refrigerator or in the freezer and it’s quite simple to prepare it and store it.

When it comes down to it, there is very little that ham and bacon have in common. The only similarities are that they come from pork varieties and both are cured. Both have naturally salty flavors without being overly salty.

Ham is typically sold in a large cut but can be broken down into other things. It comes from the leg and is typically baked to cook it.

You can purchase ham lunch meat but that not one of the natural formations of ham. Ham at its finest comes from a large cut from the leg.

Bacon is sold in strips. It can be cut to various thicknesses but it will never be sold as large as a cut of ham. Bacon comes from typically the belly or the back but could come from any part of the pig.

Bacon tends to be greasy when cooked but can also be cooked and used in a variety of ways.

If you’re interested in comparing other cuts of pork, this 20-minute video by Bon Appetit on YouTube is worth the watch!

We hope that you find this guide to understanding the difference between ham and bacon to be a valuable resource.

We invite you to review the following question and answer section. It contains some additional information that you may find to be helpful for your needs.

Can You Reuse Bacon Grease?

Can You Eat Bacon or Ham Raw?

You can eat either one of these cold but you should never eat them raw. Both items must be cooked or smoked in some manner prior to being consumed. It is recommended that pork be cooked to a minimum internal temperature of 150 degrees.

Up Next: The Best Pork Belly Substitutes

How To Recook Undercooked Turkey – The Best Way