Home Foodsguy Zucchini Vs Cucumber – What’s The Difference?
FoodsguyThis vs That

Zucchini Vs Cucumber – What’s The Difference? 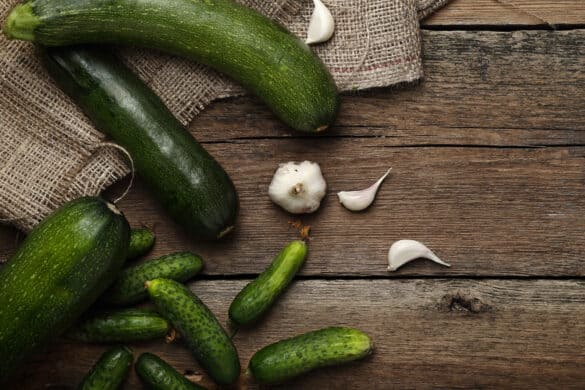 Can you think of a green gourd that is technically a fruit but is considered a vegetable and is often mistaken for another that appears identical? Weird description, right?

Would you think of a zucchini or a cucumber? These two vegetables often sit next to each other in the store and are constantly mistaken for each other. However, any botanist will know they have distinctive features and characteristics.

What’s the difference between a zucchini and a cucumber? Cucumbers have bumpier skins and tend to be smaller, while zucchinis have smoother-looking skins and are able to grow much larger. They are also from separate scientific genera and have different tastes, textures, and uses.

Below, we’ll take a more in-depth look at the differences between these two tasty “veggies.”

A General Overview of Zucchini

It is true that the zucchini, in shape and color, is not one of the most attractive vegetables and could hardly be compared with colorful peppers or fresh carrots, but in taste and nutritional qualities it surpasses most of the gifts of nature.

Zucchini is a fruit by origin, but widely accepted as a vegetable due to its culinary purposes and characteristics.

It ripens in mid-summer and is a close relative of watermelon, cucumber, and many other vegetables.

Zucchini, along with potatoes and corn, was brought from Central America to the Mediterranean.

It is said that this gift of nature was appreciated and cultivated as far back as 10,000 years ago, and centuries later the soft taste and satisfactory nutritional qualities of vegetables proved to be sufficient to begin a mass cultivation.

Who knows what the original taste of zucchini was before this cultivation began? The zucchini we know today, however, has a distinctive bittersweet taste, which is why most people prefer to cook it instead of consuming it raw.

Selection and Storage of Zucchini

When choosing zucchini for culinary use, it is important to choose them with a good firm, smooth, and undamaged shape. Spotted zucchini with injuries and soft skin are deprived not only of flavor but also of their useful substances.

When choosing zucchini, the main indication that the vegetable is fresh is its prickly surface.

It is best to choose medium to small zucchini because the larger ones have a lot of seeds and, in most cases, are overripe and very likely to have a bitter taste.

Zucchinis stay fresh for no more than 2-4 days in a dry and ventilated place. If stored in the refrigerator, this period jumps to 20 days, but it is important that they are placed in an airtight box or bag.

If you want to keep fresh zucchini in the freezer, first clean them, cut, and blanch for a few minutes in salted water. Allow them to dry, store them in envelopes, and freeze.

Zucchini has a wide culinary application – they are eaten raw, grilled, roasted, boiled, and fried. They can also be stripped or spiraled into long noodles to make zucchini noodle dishes, a healthy alternative to heavy pasta.

Not only is zucchini good for savory meals, but it can also be used to make sweet bread and cakes, from zucchini bread to zucchini brownies.

Young zucchini is the most suitable for all types of culinary purposes and are also the easiest to digest. In fact, the digestibility of zucchini depends on how they are prepared.

When they are boiled, they are easily digested, while fried zucchini are more difficult to digest.

A General Overview of Cucumbers

One of the most preferred and loved spring vegetables, the cucumber, contains more than 90% water, which makes it a refreshing agent, particularly suitable during the hot summer days.

The phrase “fresh as a cucumber” is actually a scientific fact: the temperature in the flesh of the vegetable is usually 20 degrees cooler than the air temperature.

Cucumbers originated in South Asia thousands of years ago. Early explorers and tourists brought these vegetables to India and other parts of Asia.

They were particularly popular in the ancient civilizations of Egypt, Greece, and Rome, which used them not only as food but also because of their beneficial properties for the skin.

Their skin, which vary from green to white, can be either solid or striped and have small bumps all across the surface. The inside of the cucumber is very pale green, dense and crunchy.

Cucumbers that are grown to be pickled or marinated are much smaller in size. Gherkins are one of the varieties of cucumbers grown for this purpose.

Selection and Storage of Cucumbers

The choice of cucumbers is determined by the fact that they are hard, with rounded edges, and their color is from bright to dark green. Those cucumbers that are yellow, wilted, or wrinkled at the tips should be avoided.

These vegetables need to be stored in the refrigerator, where they can be kept fresh for several days.

It is recommended to use within one or two days, but you can generally keep them for around a week in a colder refrigerator.

Cucumbers and other tender vegetables are sometimes treated with wax to protect them from injury during transport, which means that they must be peeled before consumption.

Of course, if you have a source of homegrown cucumbers, you can eat them with the peel on.

Cucumbers are one of the most widely-used products. They are among the most used vegetables for salads, especially.

Small cucumbers (gherkins) are used for pickling, which makes them one of the best appetizers.

Cucumber juice is used in diets, either undiluted or in combination with juice from other vegetables. As cucumber juice does not have a very strong taste, it is often used only as an addition to various vegetable cocktails.

Zucchini Vs Cucumber: The Differences

Zucchini and cucumbers are from one large plant family, but each have a different genus.

Since they often look alike, you should touch them to tell them apart, just in case. When you touch a cucumber, it will feel somewhat moist and soft but sturdy with little bumps.

Zucchini will appear smooth but feel course and slightly fuzzy.

Cucumbers are often thinner, while zucchini is thicker and also has a thick root on the top.

As for the taste, cucumbers are as common as a vegetable can get when it comes to salads, and it is a clear advantage over zucchini since zucchini is not particularly suitable for raw consumption.

The main difference comes from the natural taste of zucchini, which is an interesting blend between sweet and bitter.

This is why most people consume it cooked, as it will take on an entirely new taste, either sweet or savory.

Cucumber is rarely cooked, since it loses its distinctive properties.

What is a Good Substitute for Zucchini?

Zucchini is a widespread vegetable, but it remains fairly rare in certain regions in the world, like Asia.

In case you are in one such country and you cannot find zucchini or you simply ran out of it and do not have spare time to get more, there are several quality replacements that you should consider.

Eggplant has to be one of the most common alternatives to zucchini since both vegetables have a similar texture and bitter raw taste.

While there will be a difference, it will not be one that will ruin your dish. Instead, it might compliment it and become your favorite.

Yellow Squash and most other types of squash are the other best alternative to zucchini since they are all part of the same family of plants and have similar tastes.

In fact, people often mistake yellow squash for zucchini and vice versa, but this is a question for another time. All you need to know now is that they are similar and interchangeable when it comes to cooking.

In fact, we highly recommend trying both together whenever you have an opportunity. It will compliment your dish and add a touch of color.

We wouldn’t recommend cucumber as a substitution if you want an alternative vegetable that has a similar taste. Cucumber is juicier and loses its shape when cooked.

We’ve also included a chart summarizing the nutritional value of zucchinis and cucumbers:

Up Next: Is A Pickle A Fruit? – The Complete Guide

Can You Eat Quiche Cold?