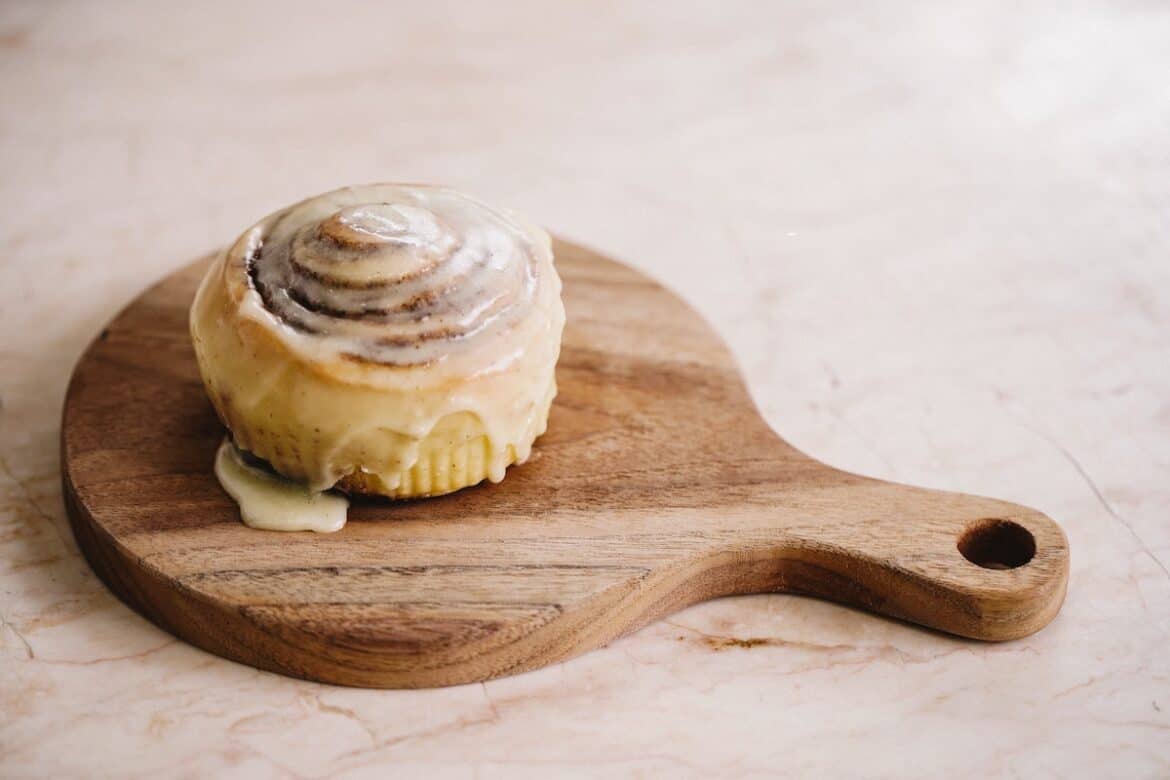 Is there anything as comforting as the smell of cinnamon rolls baking in the oven?

Every time I smell them I’m immediately transported back to elementary school when my mom would whip up a batch of those pop-open cans of cinnamon rolls as a weekend treat.

These cinnamon rolls came with a package of white glaze that we drizzled over them fresh from the oven and which inevitably ended up all over our fingers and faces.

While this classic glaze is delicious, sometimes it feels nice to change things up with new yummy toppings.

Read on to discover the 11 yummiest toppings for cinnamon rolls, some simple recipes, and exciting ways to jazz up your favorite breakfast pastry!

There’s a reason this topping is a classic! It’s deliciously sweet and creamy with a bit of a tang that cuts through the richness of a classic cinnamon roll.

The best way to use this frosting is to slather it on when your cinnamon rolls are fresh from the oven.

Getting the icing on quickly allows it to melt into all the nooks and crannies of your roll so every bite is that perfect combination of cinnamon, sweet dough, and creamy tangy frosting.

I will often put half the frosting on when the rolls are hot then put the rest on once they’ve cooled.

Splitting the frosting in two gives you the best of both worlds: lots of yummy frosting inside the cinnamon roll and a nice spread along the top so that they look great.

This topping is also great because it’s super simple to make.

Maple pecan topping for cinnamon rolls is great for folks who are looking for more sweetness, stickiness, and a bit of crunch to their cinnamon roll.

This topping is generally something you’ll want to decide on before baking your cinnamon rolls, since it tastes really great baked together.

However, if you decide you want to make a maple pecan topping after the rolls are already out of the oven, it can still taste great.

It’s pretty simple to make and you can pour it over the warm cinnamon rolls so it melts down the sides. I’ve included a basic recipe below.

Glazes are a popular topping for baked treats like cinnamon rolls, pastries, and coffee cakes.

They’re also really easy to make and less fluffy than frostings, like the cream cheese one I shared above. Glazes tend to be runnier, and they sink into all the spaces of the cinnamon bun.

The flavors also aren’t quite as intense as frosting, but the subtle sweetness really enhances the decadence of a cinnamon roll.

Glazes will typically set and harden on the top of the cinnamon roll, which also adds another layer of texture to your treat.

Making a glaze also doesn’t generally require heating, unlike the maple topping above.

You can also add things like lemon juice, lemon zest, vanilla, nutmeg, maple extract, coconut extract, or other flavors that you enjoy pairing with your cinnamon roll.

To make a simple glaze, follow the steps below. If you want to try a lemon glaze or something a little more adventurous, try searching for “best” whatever type of glaze you want to try and go from there.

Using toasted nuts and seeds as a topping is a great way to balance out the sweetness and softness of a cinnamon roll.

They are a crunchiness and toastiness that is the perfect complement to the fluffy dough and sweet filling of a cinnamon roll.

Nuts and seeds are also rich sources of protein and satiating fats, which balances out the carbs in the cinnamon roll, so you’ll feel more satisfied after enjoying them together.

You can use any nut or seed that you like, but some popular ones are cashews, pumpkin seeds, walnuts, and pecans.

If you want to get fancy you could make a topping like the Maple Pecan one above or you can roll them into the center of your cinnamon bun.

Cinnamon rolls really go well with so many things and I love the combination of fruit and berries with the spicy flavor of cinnamon.

One of my favorite ways to use up softening fruit in the kitchen is to make a delicious compote and pour it over desserts, like a cinnamon roll.

They are super easy to make and you can use any fruit that you like. Some fruits that go really well with cinnamon rolls are:

To make a simple fruit compote follow these steps:

* You could also use a mixture of fruits for a decadent combination.

Another way to combine fruit and cinnamon rolls is to use it fresh.

You can top your cinnamon roll with either whipped cream, a cream cheese frosting, or a glaze, and then sprinkle fresh fruit all over the top so it sticks to the rolls. Then sprinkle with powdered sugar.

The fruit is a great balance for the comforting richness of a cinnamon roll and adds a burst of flavor and freshness.

Lots of fruits pair well with cinnamon, so the sky is really the limit in terms of what you’d like to use. A few suggestions I enjoy include:

If you’ve had a coffee cake before then you’ve likely enjoyed a streusel. It is a crumbly topping made from flour, sugar, and butter that is strewn about the top of things like muffins, cakes, pastries, and yes, even cinnamon rolls.

While the basic streusel recipe is typically a 1:1:2 ratio of sugar:butter:flour, you can get creative by adding spices like cinnamon, nutmeg, clove, and cardamom.

You can also include chopped nuts, such as pecans or walnuts, to add some extra texture and flavor.

Adding a streusel to the top of your cinnamon roll provides another layer of flavor since they can be crumbly, crispy, and crunchy depending on the ratio you use and what you add to them.

The texture goes perfectly with the fluffiness of a cinnamon roll.

Ok. I know this one sounds weird, but hear me out. Over the past 10 years bacon has been sneaking its way into many a delicious dessert at some of the fanciest restaurants.

The smokiness, saltiness, and crispiness of bacon complement so many sweet treats and cinnamon rolls are no exception.

What I like to do is to whip up a batch of candied bacon, chop it up, and sprinkle it over the top of my cinnamon rolls.

You can use the bacon alone or combine it with the cream cheese frosting, vanilla glaze, or, my personal favorite, the maple pecan mixture.

To make your own candied bacon follow these steps:

I don’t think I have a found a dessert that can’t instantly be made more delicious by adding chocolate sauce to it.

Cinnamon rolls are definitely not the exception to this rule! Drizzling your favorite chocolate sauce or syrup over your cinnamon roll adds another layer of richness.

You can use a plain chocolate sauce or if you want to get even more indulgent, you could combine it with a caramel sauce, powdered sugar, chopped nuts, and candied bacon.

The combinations are limited only by your imagination and taste preferences.

Another great way to customize your cinnamon roll is with your favorite ice cream flavor.

There are so many great flavors out there to choose from that you could go classic vanilla to peanut butter fudge crunch. There’s no wrong choice here!

You can even take your yummy cinnamon roll topping to the next level by combining your ice cream with a couple of the other suggestions on this list.

One that is sure to be the ultimate in decadence is to combine vanilla ice cream with maple pecan topping and candied bacon. I’m drooling just thinking about it.

The combination of cold ice cream with a warm cinnamon roll fresh from the oven is something you’ve got to try.

The ice cream will melt into all the spaces and adds a creamy texture to the fluffiness of your roll. Definitely add it to your list of to-dos for 2022!

Finally, sometimes the simplest topping really is the yummiest.

Sprinkling powdered/icing sugar over the top of your cinnamon roll adds a subtle layer of sweetness that doesn’t overwhelm the natural cinnamon goodness of your treat.

It allows the texture and flavor of the cinnamon roll to really shine, but it also makes it look a little fancy if you’re planning on serving them to guests. It also couldn’t be easier! Just use a sieve to sprinkle your powdered sugar like a true pro.

Up Next: The 5 Best Coconut Vinegar Substitutes

Orange Vs Grapefruit – What’s The Difference