Do You Need Oil To Cook Bacon? 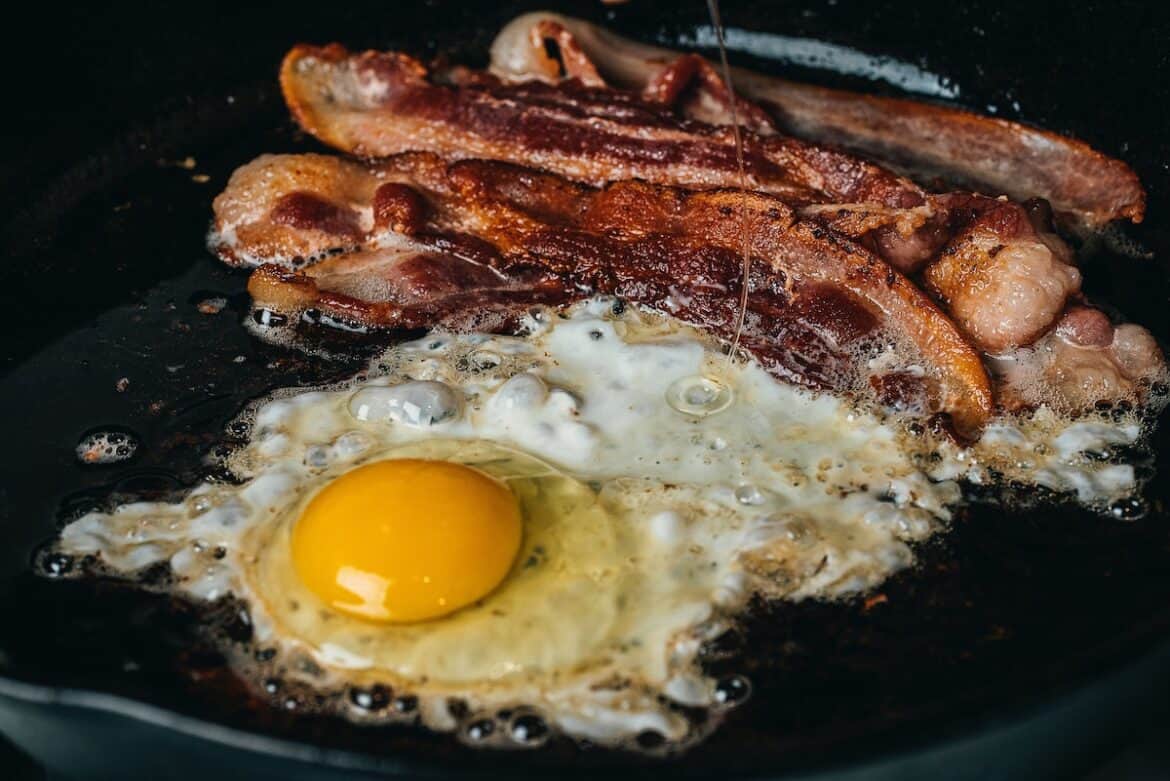 Crispy, salty, and chewy, cooked bacon is the favorite breakfast food of many people. And while bacon turns out delicious almost any way you cook it, there is a popular question about whether you need oil to cook it.

So do you need oil to cook bacon? You don’t need oil or butter to cook most bacon varieties. When exposed to low heat, the fat on the bacon strips renders, cooking the meat and preventing it from sticking to the pan.

In this article, you will learn why you don’t need oil to cook bacon, how to cook bacon without oil the right way, and what are the exceptions.

What Is Bacon Anyway?

Bacon breakfasts are some of the most appetizing meals to have for the start of the day. The mouth-watering smell of fried bacon is one of the few things to make you wake up and kick off your day.

But we don’t always know everything about the foods we love the most. What is bacon anyway?

Bacon is salt-cured pork meat. While there are different kinds of bacon, bacon is most commonly made from the pork belly and certain parts of the pig’s back. Bacon is cut, served, and cooked in thin slices.

Fried bacon is a popular breakfast ingredient. You can serve pan-fried bacon as a side dish or crumble it over salads, pasta dishes, and creamy soups.

Products similar to bacon are manufactured from other meats too, including turkey, lamb, and beef. This is why you may come across such products as turkey bacon, beef bacon, etc.

Can You Eat Bacon Raw?

A popular question is if you can eat bacon without cooking it. There are two sides to this question.

In many cases, bacon is also smoked after the curing process. Smoking bacon at high temperatures makes it reach an internal temperature high enough to make it safe to eat the bacon raw.

But does curing and smoking meat make it suitable for consuming it without cooking?

Many experts claim that eating bacon without cooking it is risky despite the fact that the meat has been salt-cured.

Even if the bacon you have purchased is smoked, you never know if the bacon was properly hot-smoked or simply given a smoky aroma. Consume it without cooking only if the packaging states that you can.

Eating raw or undercooked bacon may lead to foodborne illnesses as there is a chance of bacterial growth in it. So, err on the safe side and cook the bacon before eating it.

Do You Need Oil To Cook Bacon?

Another question is if you need oil to cook bacon.

In each slice of bacon, there is fat and meat. In the majority of the cases, there is quite a lot of fat in bacon. When you expose bacon slices to heat, the fat melts away. In other words, the meat in the bacon cooks in its own grease.

So, you don’t need oil or butter to fry bacon unless your frying pan is of poor quality and doesn’t have a non-stick surface.

Another case when you absolutely need to use oil for cooking bacon is when you are using Canadian bacon or very lean bacon strips.

How To Cook Bacon Without Oil?

Cooking bacon seems to be a fairly easy task considering the fact that you don’t need any additional ingredients. In reality, though, there are minor mistakes people make that result in poorly cook bacon.

Here is how to cook bacon without oil so that the fat is properly rendered and the bacon doesn’t burn:

Once you’re done cooking, there’ll usually be a lot of grease left in the pan, which is too delicious to just throw away!

There are many ways to use bacon grease. You can use it instead of olive oil to roast vegetables, drizzle it over your pizza, fry burger patties, make grilled cheese, hash browns, and much more!

But Can You Cook Bacon in Oil?

So, you don’t need to cook bacon in oil. But can you?

Yes, you can cook bacon in oil. While doing it adds unnecessary calories to cooked bacon, the oil you add into the pan helps the bacon fat render more easily and prevents the meat from burning.

Aside from cooking bacon with oil in a pan or skillet, you can deep-fry bacon. You can fry bacon strips in an ample amount of cooking oil as is or batter it first and only then deep fry it.

You are recommended to cook bacon in oil or fat if your bacon strips are very lean and don’t have enough fat to melt and cook the meat.

What Is The Healthiest Way To Cook Bacon?

Cooking bacon in the air fryer is one of the healthiest ways to cook it. When you cook bacon strips in the air fryer, the rendered fat falls to the bottom. So, you don’t consume extra calories and fat.

If you don’t have an air fryer, you can cook bacon in the oven instead. Simply arrange the bacon strips on the oven rack, making sure to place a baking tray underneath to catch the fat that will drip off the bacon.

The only downside is that cooking bacon in the oven does take longer than most other methods, around 20 minutes.

But the good thing is that you can cook a large batch of bacon strips at a time when using the oven. You can do this with an air fryer or a pan.

Other Ways To Cook Bacon

While the most popular way of cooking bacon is frying it in the pan, there are other cooking methods you can go for.

Microwaving is a quick way to warm up the bacon strips for a sandwich.

Microwave bacon strips covered with paper towels for around a minute for a quick warm-up and for around 3-4 minutes to get the strips somewhat crispy.

Cooking bacon strips on a grill is another great way to make crispy bacon.

Canadian Bacon: What Is It And How Do You Cook It?

As mentioned earlier in this article, Canadian bacon is a bacon variety that needs oil for cooking. But this is true only for certain cooking methods.

Canadian bacon is similar to ham, but it is not ham. It is made from pork loin and is very lean compared to regular bacon.

Fry the Canadian bacon slices for 1-2 minutes on each side or until you are happy with the color. When you take the bacon out of the pan, let it rest for a couple of minutes before you serve it.

Cover the bacon slices with paper towels and microwave on 50% power for around a minute.

Cooking Canadian bacon in the oven is another great method to avoid cooking it without oil. Simply arrange the bacon slices on the pan and cook them for 10-50 minutes in the oven preheated to 400°F.

Up Next: How To Thicken Stewed Tomatoes

How To Thicken Stewed Tomatoes