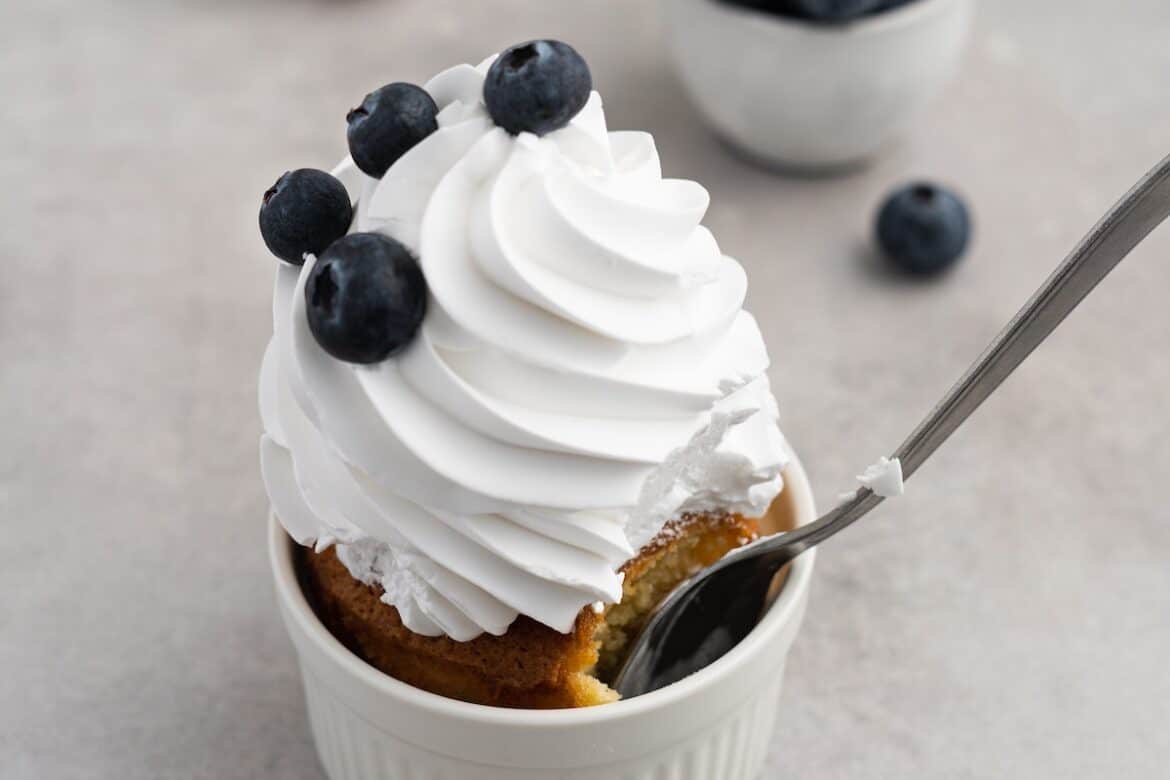 What’s the best way to take your desserts to the next level? Toppings, of course!

You can be as creative as you like and, depending on your mood and preference, may opt for anything such as chocolate, sprinkles, fresh fruit, nuts, whipped cream, and frozen whipped toppings.

Frozen whipped toppings are one of the most popular options for topping desserts and beverages such as cakes, cupcakes, pies, ice creams, milkshakes, hot chocolate, Caffè lattes, and other espresso drinks.

People oftentimes confuse whipped cream with whipped toppings, and although both are used more or less for the same purpose, they are not the same.

What Is Frozen Whipped Topping?

Made with ingredients such as skimmed milk, vegetable oils, corn syrup, and other natural and artificial additions, frozen whipped toppings are a good option for people looking for a quick and low-fat substitute for whipped cream.

Available in different flavors and varieties, frozen whipped toppings can be frozen, defrosted, and refrigerated without altering their components.

Since they are sold frozen, you have to let them thaw first before using them. Once defrosted, they will be ready to be used to top cakes, pies, ice creams, and other desserts.

Since they hold their shape, they can also be used to make simple no-bake desserts.

Cool Whip is one of the most popular frozen whipped toppings brands in the US and is available in aerosol cans or plastic tubs.

All varieties of Cool Whip contain milk proteins and are off-limits for those looking to go dairy-free.

For non-dairy frozen whipped toppings, you may go for brands such as Reddi-Wip and So Delicious that use coconut milk and almond milk in place of dairy milk.

Like most processed items, albeit delicious, store-bought frozen whipped toppings are not the best in terms of the ingredients that they use.

They contained stabilizers that help them retain their shape and consistency and have come under scrutiny as not being the healthiest option out there.

Are Frozen Whipped Topping And Whipped Cream The Same?

Whipped cream is basically heavy cream that has been whipped until it doubles in volume and achieves a light and fluffy consistency.

It contains natural ingredients such as cream, confectioner’s sugar, and vanilla extract. Some store-bought varieties may also contain gelatin as a stabilizer.

Due to the high-fat content of the heavy cream, whipped cream forms soft, light peaks when beaten. Since air is incorporated into the mixture, it gives the whipped cream the ability to stand on its own.

You can easily make whipped cream at home using a whisk or an electric mixer.

It increases in volume as it stabilizes and must be immediately stored in the refrigerator for several hours; however, it will begin to deflate over time and you may want to re-whip it before serving.

Frozen whipped topping, on the other hand, is a store-bought alternative for whipped cream that may or may not contain dairy.

You will find it in the frozen section in the supermarket and it contains ingredients such as emulsifying water, hydrogenated vegetable oil, sugar, and high-fructose corn syrup.

Although it contains significantly less fat than whipped cream, it usually has added sugar and is much sweeter.

Frozen whipped toppings also contain stabilizers that help it keep its shape, making it easier to use as a topping and in certain baked goods.

Now that you know what frozen whipped topping and whipped cream are, here are the differences between them in terms of their ingredients, texture, and flavors!

As mentioned earlier, whipped cream is made with a handful of natural ingredients such as heavy cream, sugar, and vanilla essence, and has a milk fat percentage of around 36%.

The higher the percentage of fat in the heavy cream, the better the whipped cream holds its shape and texture.

Frozen whipped toppings, on the other hand, are a type of processed food made using a long list of ingredients, most of which you can’t even pronounce.

It is a combination of skim milk, light cream, vegetable oil, and high-fructose corn syrup, along with natural and artificial additives that give it a relatively long shelf life.

Also, its high sugar content may be an issue for many, though it does add sweetness and an extra layer of flavor to it.

Whipped cream has a light, airy texture due to the air incorporated into the heavy cream during the beating process, which gives it a thick and stable form.

Frozen whipped topping has a heftier texture and its appearance resembles that of cream cheese or sour cream. The heftiness, however, may be attributed to the whipped topping being condensed into a tub.

To give whipped cream its deliciously sweet flavor, confectioner’s sugar is added to the mix, which is a much better option than regular table sugar since it does not clump and dissolves easily.

Some variants of whipped cream, such as crème Chantilly, use vanilla extract to add that extra bit of flavor.

Frozen whipped toppings, on the other hand, get their flavor from a combination of natural and artificial flavorings.

There are additives such as xanthan, guar gum, polysorbate 60, and synthetic wax. Due to the addition of corn syrup, the sugar content is also very high making it sweeter than whipped cream.

How To Make Your Own Frozen Whipped Topping At Home

Scoop some delicious frozen whipped topping over hot chocolate or coffee, or dip your favorite fruit in the delicious cream; the possibilities are endless!

All you need are a few basic ingredients that include:

To use the whipped cream as it is, you may use it on any dessert of your choice or transfer it into piping bags to decorate them.

However, to make frozen whipped topping, you need to freeze the whipped cream, and here’s how:

Although powdered sugar is traditionally used to sweeten whipped cream, you may use alternatives such as maple syrup to give it a more complex flavor.

Also, for an added kick, we suggest using vanilla extract or vanilla bean paste, if you can get your hands on some.

While whipped cream tastes great in its original form, you may add your choice of optional flavors and get creative with them to accentuate your dessert.

Some common flavors include cinnamon, pumpkin pie spice, peppermint extract, fresh lemon or orange zest, bourbon, rum, or other liquors of your choice.

We suggest starting with smaller amounts of any new ingredient and adding more to the mix as you go.

If you are afraid of over whipping the cream by adjusting the quantity of the ingredients, you may fold them in using a rubber spatula instead of a mixer or whisk.

Now that you know all about frozen whipped toppings and how to make your own at home, here are a few additional questions we thought you might have:

An unopened tub of store-bought frozen whipped topping can last for about 3 weeks in the refrigerator if stored properly and about 1 year if frozen.

Homemade frozen whipped topping can last only 3 days in the refrigerator and about 3 months in the freezer.

Once the package of the store-bought frozen whipped topping is opened, you can expect it to last only for a week. If it is homemade, we suggest you use it as quickly as possible since it may last for only 2-3 days.

How can you tell if frozen whipped topping has gone bad?

A simple way to tell if your store-bought or homemade frozen whipped topping has gone bad is to rely on your senses of sight and smell.

Any discolorations or weird odors emitting from the cream are signs that it has gone bad. A significant change in its consistency is also a sign of spoilage.

If you see water floating on the surface of the cream, there is a big chance that the whipped topping has gone bad and you should just throw it out.

If you taste it, you will find that it has a dry, sour, and tangy taste that sticks to your tongue. If you see any of these signs, do not use the frozen whipped topping as it may make you sick.

How do you thaw frozen whipped topping?

There are a few easy ways to thaw frozen whipped topping; however, you need to be extra careful while doing so since it can spoil very easily if left at the wrong temperature for too long.

The most common way to do so is in the refrigerator by leaving the frozen whipped topping in there for 4-5 hours, or preferably overnight.

Although pretty straightforward, it works only if you have enough time on your hands and know beforehand that you need to thaw the whipped topping.

The best method if you do not have the time to defrost the whipped topping in the refrigerator is to thaw it in cold water.

Just take a bowl large enough to hold the container of the frozen topping and pour cold water into it. Place the container in it for about 30-40 minutes.

Up Next: 7 Best Crushed Peppermints (& How To Crush Your Own)

7 Best Crushed Peppermints (& How To Crush Your Own)