Why Are My Brownies Cakey? 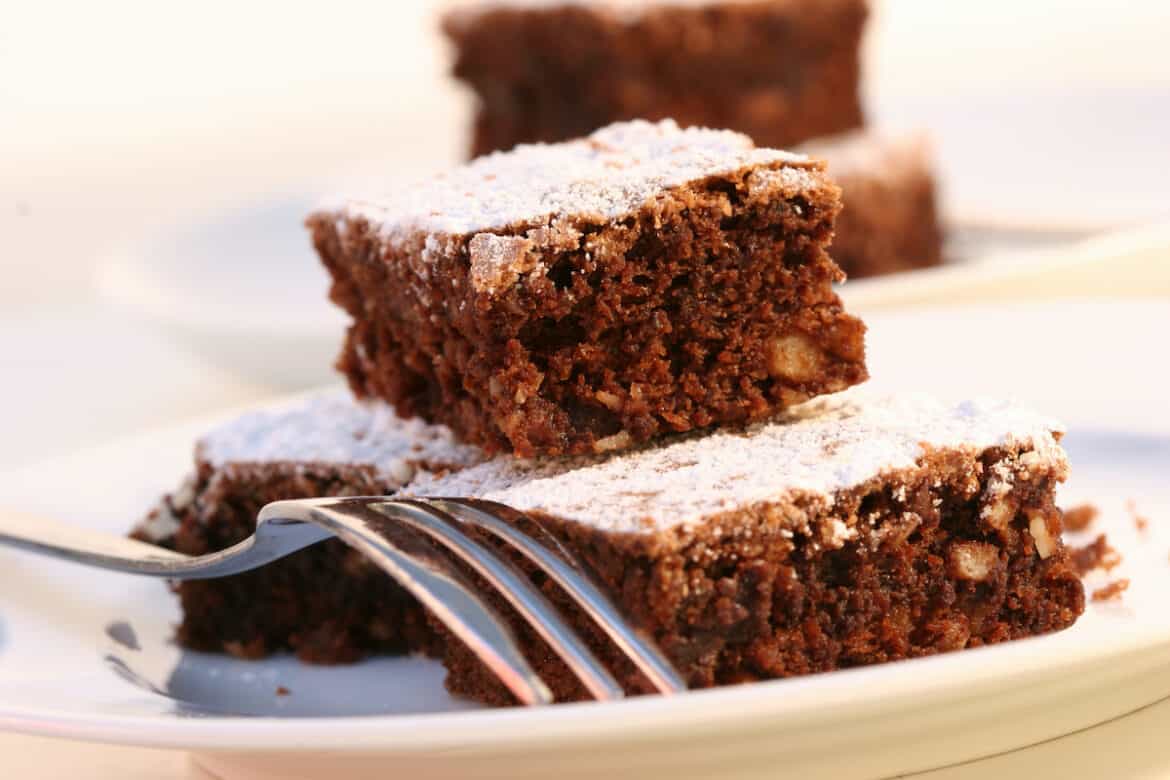 Everybody loves a good brownie, especially ones with a nice soft, gooey, and fudgy texture. But they don’t always come out this way, even if you’ve already made the recipe a thousand times before!

Baking is a science, and knowing exactly why certain things happen, especially when they go wrong, will help you understand what you need to do to fix them.

One of the biggest “mistakes” that happens when baking brownies are related to their texture.

The secret to getting your favorite type of brownie is all in the ratios. But if your go-to brownie recipe turned out too cakey just this once, it is more likely you overbaked it a little.

To get fudgy brownies, bake them a little less or adjust the recipe.

Today, we will have a look at the differences between fudgy and cakey brownies. Then, we will discuss exactly what you need to achieve one of the other. Lastly, we will also answer a bunch of frequently asked questions regarding other brownie baking problems.

Before even looking at what affects the texture of brownies and why they come out the way they do, you first have to understand what the different types of brownies are in order to make the right ones.

Other than flavor, what makes some brownies better than others is their texture. Some brownies have a more cake-like texture while others are chewier and fudge-like.

Fudgy brownies also referred to as chewy brownies, are much denser, softer and moister compared to cakey brownies. This is because of their higher fat ratio. It creates a gooey-like texture that is soft and luscious.

Cakey brownies have a much higher flour content compared to fudgy brownies and will create a more cake-like and lighter exture.  These brownies contain a lot less moisture because they have more flour, and are therefore drier (not in a bad way).

Neither is better (although you may disagree!). It is just a matter of personal preference.

Naturally, it is frustrating for many people when their brownies come out the opposite of what they prefer. Let’s help you prevent that!

Why Did My Brownies Come Out Cakey?

So, now that we have discussed how different ingredients affect the texture of the brownies, it is much easier to understand why they came out in a certain way.

Cakey brownies are almost always a result of the recipe and ratio of its ingredients.

Recipes that are high in flour will almost always be for cakey brownies.  If you aren’t sure what “high in flour” means, check if the recipe contains baking powder or bicarbonate of soda.

If it does, it means that they want the texture to be fluffy in order to create cakey brownies.

Recipes that are low in fat will also yield cakey brownies. Fat comes in the form of butter, oil, chocolate, and even milk.

Any recipe that doesn’t contain a ton of liquid will also be cakey. A recipe that has a lot of eggs is another indication that your brownie will be cakey.

Lastly, over-baked brownies will also come out cakey as you have removed all of the moisture.

Can You Fix Cakey Brownies?

Even if the ratios were correct but you over baked them, again, you cannot really add back chewiness or a fudge-like texture.

The best you can do is by pouring chocolate or simple syrup over the brownies while they are still hot. This will add some moisture, but it will not change the baked cake-like crumbly texture.

You can also always eat your brownies with ice cream to balance the dryness.

What Affects the Texture of Brownies?

So, now that you understand the difference between cakey and fudgy brownies, we can have a look at all the different factors that affect this texture.

By understanding what creates the different textures, you will be able to easily identify what you need to achieve a specific texture or what you can do to fix a faulty one.

A basic brownie recipe consists of butter, flour, sugar, eggs, chocolate, a raising agent, and sometimes a liquid like milk or oil.

So, the most important element that affects the texture of brownies is the fat. Fat can be incorporated using butter (which is all fat) or chocolate (especially milk chocolate which has a high fat content).

Fat adds a ton of moisture and mouthfeel and is essentially the core of any good fudgy brownie. The more fat is in a recipe, the moister the brownie will be.

Next, we look at flour.

As we have briefly mentioned, the more flour a recipe has, the cakier the brownie will be. This is because flour soaks up the moisture of the other ingredients. So, if you want a cakey brownie, you need loads of flour, and if you need a gooey brownie, you want little flour.

Baking soda or baking powder are common raising agents that are used in brownies. They are almost always included in cakey brownie recipes to help create a tall structure.

You don’t want a dry and dense brownie, but rather a crumbly airy one.

The amount of sugar doesn’t really affect the texture of a brownie unless you are using something like brown sugar, muscovado, or molasses. These are sugars that are high in moisture and will thus add some to the mixture.

“Sticky” sweeteners (like honey, muscovado, or syrup) will definitely add a ton of liquid and chewiness.

Oil and milk naturally also add moisture, but the ratio of these will determine the texture of the brownie. More liquid will result in a chewier and fudgier brownie.

Besides ingredients, the baking times of brownies will also directly affect the moisture levels. The longer an item bakes, the more moisture is removed and the drier the product will be.

So, for chewy brownies, you don’t want to bake them for too long – you may even want to slightly under bake them. Cakey brownies will always bake for the full time, if not slightly longer.

As a word of warning, however, be careful when trying to under bake brownies. It is generally considered risky or even unsafe to consume raw or undercooked baked goods with eggs.

When we say undercooked, we mean the minimum amount of baking time that still cooks your brownies. Just like you can pull cookies out of the oven when they’re a little gooey or a little crispy, an extra couple of minutes can affect your brownies.

How to Prevent Cakey Brownies

While there aren’t any ways to fix cakey brownies, there are a ton of ways you can prevent them from becoming cakey.

1. Most people over-bake their goods. To prevent this, it is important to follow the baking times exactly.

2. You should also check your oven temperature. Many, if not most, ovens have irregular temperatures and hot spots. Make sure you know your oven before using it.

If your oven is warmer than it is supposed to be (or colder), adjust the temperature accordingly. But do not adjust the baking times!

If for example your oven is too hot and you bake the brownies shorter, the only thing it will actually do is over-bake the outside and under-bake the inside. Rather make the oven a bit cooler and bake for the correct amount of time.

3. If your oven is working fine, the cakey brownies are due to the recipe. You can either check a recipe before making it or you can adjust a recipe.

If you want to adjust a cakey recipe to create a more fudgy brownie, you can do one of the following:

Try one of these solutions at a time to ensure you don’t change the whole recipe! Remember to make notes of any changes you made so you can improve the next batch!

How to Fix Undercooked Brownies

Even if you love fudgy brownies and moist baked goods, there is such a thing as too moist. Just like with undercooked cakes, you’ll want to cook those undercooked brownies just a bit more.

To fix undercooked brownies, simply place them back into the oven and bake them for another 5-10 minutes (depending on how raw they are).

Again, it is important to make sure your oven works correctly and that there aren’t any fluctuating spots.

An oven that runs colder than it’s supposed to will naturally cause the brownies to be under baked, so next time just turn it up a bit higher.

Why Are My Brownies Flat?

Brownies aren’t cakes and a lot of people think that they are supposed to rise a lot. Brownies, especially fudgy recipes, will rise only a tiny bit.

But if your brownies turn out extremely flat, it may be a result of over mixing.

You can also see if the recipe included baking powder or baking soda, which are essential ingredients for cakey brownies and for any baked good to rise.

Another big reason brownies become extremely dense is because there is too little sugar. When beating the sugar and butter together you are incorporating air. So without much sugar, your brownies will have no air and no structure.

Why Are My Brownies Hard?

Hard brownies can be a result of a few things:

To soften hard brownies, you can try to place them in a preheated oven for a few minutes. It will soften the sugar crystals and create a much more appealing texture. It may be best to brush a little butter on top to add back some moisture.

Why Did My Brownies Crack on Top?

This is a result of over beating the batter and incorporating too much air.

The air bubbles in the batter will expand when the batch is being baked, and once removed from the oven they shrink. When they shrink, they create cracks in the top of even cause the middle of the batch to sink.

Up Next: Does Brownie Mix Go Bad? – How To Tell

Can You Freeze Cherry Pie?