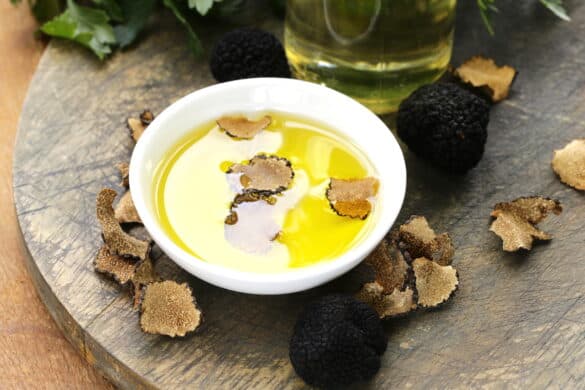 Truffles are luxury gourmet items and their exclusivity extends to truffle oil as well.

Both oils should be used as finishing oils, rather than cooking oils, but the subtle difference in aroma and potency can dictate what type of dishes you use each oil on.

In this article, we’ll explain exactly what truffle oil is, what the difference is between white and black truffle oil, and share some tips about how best to use each type of oil.

What Is Truffle Oil?

Truffle oil is a type of high-quality olive oil that is infused with the flavor of truffles, either white or black. When truffle oil was first made, the truffles or truffle pieces would be soaked in the oil, letting the flavor permeate the oil.

These days, truffle oil is more commonly made with synthetically-produced truffle flavoring because the truffles themselves are rare and very expensive.

All-natural truffle oils can still be found, but they will be much more expensive. They will also have a more well-balanced flavor, while artificially made truffle oil will focus on a single flavor note.

Unfortunately, there are no regulations that require a manufacturer to state whether their oil is made with real truffles or with artificially created flavors, so you have to rely on the integrity of the business to decide whether your oil is of premium-quality or not.

Most true truffle oils will go to great lengths to earn your trust in their natural quality.

Artificially-produced truffle oil is more likely to use vague terminology like “truffle essence” or “aroma of truffle” instead of specifically stating the type of truffle used and where it was sourced from.

Truffles are a type of very rare, edible mushroom. They’re difficult to grow and even more difficult to find in the wild, which is one of the main reasons they command a very high price.

They also have a very short shelf-life once they’re harvested.

Truffles can be grown in many places around the world, though certain locations are known to grow specific, prized species. For example, Italian white truffles and black truffles from France are two very exclusive types of mushrooms.

Truffles are most well known for their fragrance, which heavily influences the flavor. They are often described as musky and savory, and words like gamey and earthy are also used frequently to describe truffles.

Interestingly, truffles are also known to have pheromones that affect insect and animal behavior. This is one of the reasons female pigs were traditionally used to hunt for truffles, as they’re attracted to the pheromones the mushrooms give off.

Dogs are also able to sniff out the mushrooms and they aren’t as likely to eat them upon discovery, so they’re the preferred truffle-hunting animal. It’s also why truffles are often used as aphrodisiacs.

What Is Truffle Oil Used For?

Truffle oil is primarily used to add a truffle aroma to a dish. Because of this, it’s most often used as a finishing oil.

Premium versions of all your favorite foods may be drizzled with truffle oil to add flavor, fragrance, and a much higher price-tag.

French fries, pizza, pasta, and even mashed potatoes can be turned into gourmet meals with the addition of less than 1 ounce of truffle oil.

What Is White Truffle Oil?

Whether natural or synthetic, the flavor it provides is somewhat sulfurous and spicy, with flavors similar to garlic, onion, and other alliums, though diluted into a meaty, distinctly mushroomy flavor.

What Is White Truffle Oil Used For?

The most important thing to remember when using any kind of truffle oil is that cooking it will destroy the flavor, so you want to use it exclusively as a finishing oil.

Compared to black truffles, the flavor and aroma of white truffles is more delicate and subtle. It works well drizzled over pasta or risotto, or any other dish with fresh, light flavors.

What Is Black Truffle Oil?

In comparison to white truffles, what does black truffle oil taste like?

Black truffles are naturally more pungent and earthy tasting, getting much of their flavor from dimethyl sulfide, similar to cabbage and cauliflower, but with undertones that taste almost chocolate-like.

What Is Black Truffle Oil Used For?

The best black truffle oils are the most expensive, even compared to white truffle oil. The flavor lingers longer and will make an even stronger impact on your dish. Of course, black truffle oil should also only be used as a finishing oil.

Black truffles have a stronger flavor than white truffles, allowing the oil to stand up to more hearty and robust recipes. Try using a touch of black truffle oil to enhance roasted meat dishes, pizza, or other recipes that have bold flavors.

White Vs Black Truffle Oil – Which Is Better?

There is no clear winner in the debate over whether white truffle oil is better than black truffle oil, as they are both extremely decadent and gourmet. Black truffles may be slightly more exclusive, but that does not necessarily make them better.

Some people have a preference for the flavor and fragrance of either black or white truffles and that preference will likely extend to truffle oil as well.

While the choice to use either one depends on personal taste, it is generally agreed that white truffle oil tastes better on light or creamy foods, while black truffle oil is good for heartier, stronger dishes.

Can I Substitute White Truffle Oil for Black, or Vice Versa?

In nearly every situation, you can substitute these two truffle oils for one another without too much difficulty.

Black truffle oil does have a stronger, more earthy, and robust flavor than white truffle oil, so if you’re using it in a very delicate recipe, you may want to use slightly less oil than called for.

White truffle oil also adds a peppery, garlicky flavor, whereas black truffle oil is more sulfurous. However, they are similar enough that you’re unlikely to notice a significant difference.

Now that we’ve satisfied your curiosity, we invite you to take a look at a few frequently asked questions about truffle oil that we’ve gathered for your convenience below.

How Long Does Truffle Oil Last?

Every bottle of truffle oil should have a best-by date stamped on it, along with storage recommendations. It is best to abide by the instructions of your exact oil.

In most cases, truffle oil will stay fresh for 8–12 months if it is unopened. Once the bottle is opened, the fragrance will start to degrade quickly. Since much of the value is in the aroma, your truffle oil will quickly lose its potency.

Truffle oil can be stored in a cool, dark location out of direct sunlight unless otherwise specified on the bottle. Even after opening, it shouldn’t be stored in the fridge.

If it is cooled too much, it will cause your oil to go cloudy and may alter the flavor as well. Truffle oil should never be kept in a hot location, as heat will quickly and significantly change the flavor.

Truffles are mushrooms and truffle oil is made from high-quality olive oil, so white truffle oil should be naturally vegan-friendly, yes.

Many truffle oils don’t even use real truffles, but artificial flavoring is generally accepted as vegan-friendly as well.

All-natural truffles may be made with mushrooms that have been found using the help of pigs, dogs, or other scent-hunting animals.

This does not mean the product is any less vegan, as the animals are not harmed in the process, but the use of work animals to find the truffles may trigger some alarm bells in the minds of very conscientious vegan shoppers.

Truffles are very high-end, gourmet mushrooms, so it wouldn’t make sense to infuse low-quality oil with their essence.

Instead, truffle oil is made from premium, cold-pressed extra virgin olive oil. Olive oil is thought to be heart-healthy thanks to the monounsaturated fats and a good source of a variety of vitamins and minerals.

The truffles themselves also boast a nice collection of micronutrients. However, even with all-natural truffle oil, these nutrients aren’t likely to be retained by the oil.

More importantly, artificially flavored truffle oil certainly won’t add any additional nutritional value, and that is the most common type of truffle oil.

With all this in mind, the health of truffle oil is really only as healthy as high-quality olive oil, which has many benefits but also some drawbacks. As with all good things, truffle oil is best in moderation.

What Is a Good Truffle Oil Substitute?

If you don’t enjoy the taste or scent of truffles, the best substitute is a simple extra-virgin olive oil that hasn’t been infused with truffle. It will have the same effect on your recipe without the additional flavor.

If it is the flavor that you want, but you don’t have the oil, you can use fresh truffles or another type of truffle-infused sauce, such as a hot sauce, though the effect will be much different.

Up Next: Does Olive Oil Really Ruin Non-Stick Pans?

Do Oats Come From Wheat?

How To Moisten Cake – The Complete Guide

TIL I’ve been burning up truffle flavor in the cooking process. Thank you. Good stuff.