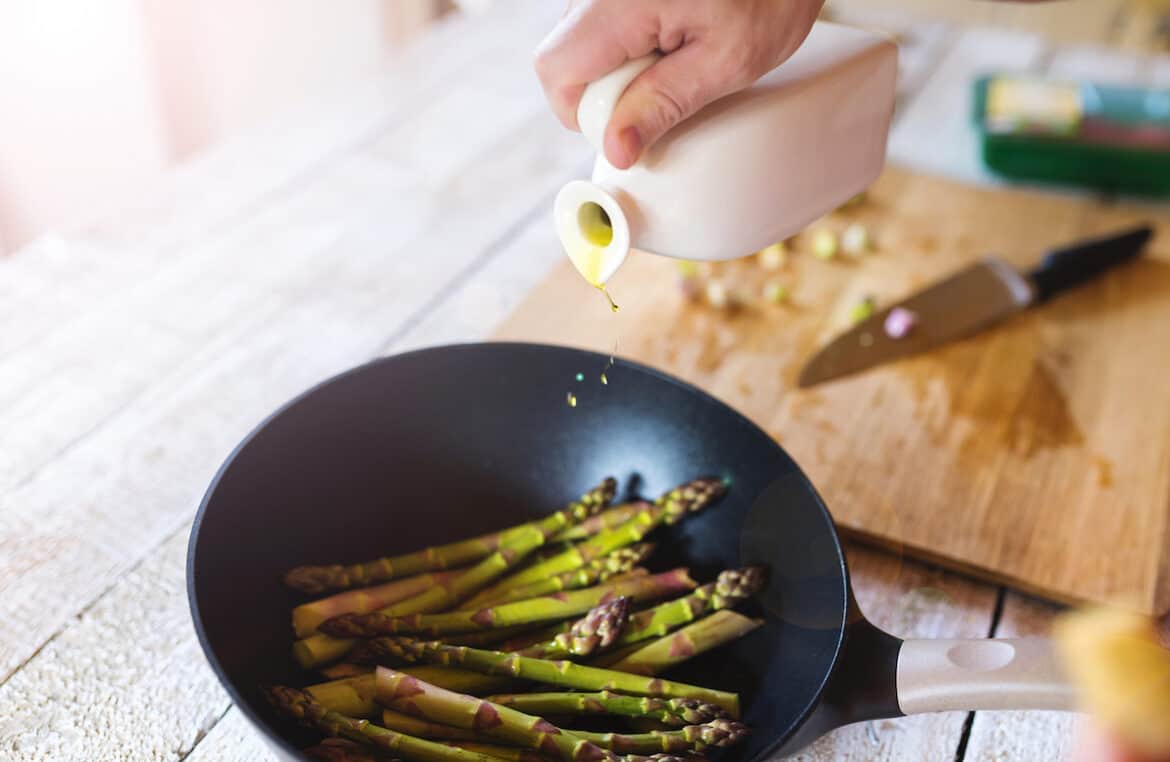 With so many products that are meant to help you in the kitchen, is it possible they could actually be affecting your process negatively?

Recently, there has been a lot of talk around what products actually ruin your pans, especially the really expensive non-stick ones.

Olive oil has especially been under a lot of scrutiny lately for “ruining non-stick pans.” But is this true?

Does olive oil ruin a non-stick pan? No, olive oil doesn’t ruin non-stick pans. There are many factors to consider when cooking with olive oil to prevent your pan from eventually being ruined, but the oil itself doesn’t affect the non-stick surface in any negative way.

In this article, we will have a look at non-stick pans and whether or not certain cooking oils shorten their lifespan. We will also be looking at other factors that play a part and how you can prevent them from becoming unusable.

We’ve found that breaking down elements will help us better understand how they work. So, by breaking this question down into sections, we will ultimately be able to answer the question, “does olive oil ruin non-stick pans?”

First, let’s look at non-stick pans and surfaces. Pans and pots are mostly made from stainless steel but can also be made from other materials like ceramic. They are then covered with a non-stick coating.

This non-stick coating is commonly made from PTFE, also known as Teflon (a brand that produces a specific type of PTFE).

This coating is very helpful when it comes to making food, as it allows the user to cook almost anything without it sticking to the pan or even burning. These pans are also considerably easy to clean, which is another reason they are so popular.

It is important to note (we will refer back to this later) that when these materials are heated above 660˚F (350˚C), the coating becomes fragile and releases hydrofluoric acids and organofluorine compounds.

These are all very fancy words, but this basically means that they can release dangerous chemicals into your food.

Moving on to the cooking oils. Originally, they were being used as a way to prevent foods from sticking to stainless steel or cast iron pans and pots, way before non-stick was ever a thing.

These oils can either be animal or plant-based, and they consist of mainly fat. Each type of fat has different characteristics that can be mostly categorized into smoking point, flash point, and flavor.

These are the three main points when deciding which one to choose.

Olive oil has long been a very popular fat to use during cooking. Extra Virgin Olive Oil has a smoke point around 374˚F (190˚C). In addition to this, it gives color to food (a nice golden brown) and accentuates its natural flavors.

This oil also has a very pleasant, yet neutral, taste that adds a lot of character to savory items.

Tons of plant-based oils can be found on the market. Oil can come from seeds (sunflower, flaxseed), nuts (peanuts, macadamia), and fruits (avocado, corn, coconut).

Always try to use an oil with a neutral flavor and high smoke point for general cooking.

There are also various animal-based fats like butter and lard. These work in very different ways and usually have lower smoking and burning points. They are, however, very tasty and also add an appetizing color to food.

Can You Use Olive Oil in a Non-Stick Pan?

So, let’s get straight to it. Can olive oil ruin a non-stick pan? No, it cannot. Olive oil actually acts as a protective barrier between the food and the non-stick coating.

Also, as we have just discussed, olive oil has an average smoking point, meaning it can handle a lot of heat before changing and allowing the food to stick and burn.

Out of all the fats possible, olive oil is actually one of the least likely to cause damage to your non-stick pans.

You don’t have to always use olive oil in a non-stick pan, but we certainly do, especially with older pans.

Why Do People Blame Olive Oil?

There are many reasons that non-stick pans get ruined and many people probably blame it on the olive oil, since that is what they constantly use. What else would ruin the pan, right?

But believe it or not, sometimes one bad move (which we will discuss) can ruin your non-stick coating forever.

Even though non-stick pans are meant to always be non-stick, that’s like saying that an onion should always be the same size. Random example, we know, but you get what we’re saying. You cannot expect a pan to be non-stick without flaw.

One of the main reasons non-stick pans are less effective is due to their age. After each use and clean, the coating slowly deteriorates and becomes less effective. This is very natural and there is truly nothing you can do about it.

The best way to extend the pan’s life is to implement proper cleaning and care.

Adding Oil At The Wrong Time

When adding oil (or any fat) to a non-stick pan, timing is important. There isn’t a right and wrong, just a better this than that.

When heating oils on a non-stick pan, it is better to add the oil when the pan is still cold so they both heat simultaneously.

The oil helps coat the pan before all the food absorbs it, creating a nice protective coating. The second reason, and one we spoke about earlier, is the toxic fumes that release if the pan is heated dry or too high.

These are all just preventative measures. If you add the oil at the wrong time, it won’t ruin your pan. The food is just more likely to stick, causing damage to the pan and decreasing its life.

Having the heat too high is never a good thing in cooking. For one, it rarely affects the food in a good way, and secondly, the damaged food damages the pan.

High heat causes moisture to dry out, both cooking liquids and the oils the item are cooked in. When the moisture is completely gone, the food starts to stick terribly, which damages the pan.

When you also cook food for a long period without stirring, for example when reducing liquids to make sauces and glazes, the moisture evaporates and the food starts to stick. Try to avoid reducing liquids in non-stock pots and pans.

This is where people more often than not ruin their non-stick pans completely: scraping the pans with pot scours.

We absolutely hate it when people reach for the pot scour instead of a million other methods. Don’t even get us started on the metal ones.

Pot scours have very rough and coarse surfaces that can and will remove that protective non-stick coating. Please, please and pretty please, never use anything other than a wet cloth to clean non-stick pans. Your pan will thank you.

If the pan is very sticky and burnt, you can simply add boiling hot water with some dish soap. The burnt food will eventually become loose and you will be able to gradually wipe away the char.

Also don’t use heavy-duty chemicals, acids, or alkaline, as they will also damage the coating.

Another thing that ruins a non-stick pan is when people don’t clean it properly. Not by using the wrong type of cleaning tool, but literally not removing all the burnt pieces, or sticky parts, or even food.

It isn’t the olive oil that causes the pan to not work; it’s the user that doesn’t clean it off. You’ll want to make sure that any and all traces of fat and food are removed before storing the pan to prevent build up.

Another big culprit that ruins non-stick cooking pans is wrong utensils being used in it. You cannot use any hard metal or wooden cooking utensils.

These will scrape the coating and gradually remove it or create weak pots that will chip away.

Instead, use plastic or silicone (we love silicone) cooking utensils. You can gently scrape the bottom of the pan to loosen the food without damaging it.

Cooking spray doesn’t ruin your non-stick pans either. What does ruin it, again, is when people don’t clean the spray off properly after it is used.

When cooking spray is heated to a very high heat (like in a pan), it coagulates and becomes very hard and sticky (just like your very shiny baking sheet that is now brown). This stickiness needs to be removed before storing to prevent build up.

You can take a hot soft sponge or cloth and apply pressure to the sticky areas. This will remove them without causing any damage.

Up Next: Ghee Vs Olive Oil – What’s the Difference?

How To Reheat Pita Bread – The Best Way