Home Foodsguy Ghee Vs Olive Oil – What’s The Difference?
FoodsguyThis vs That 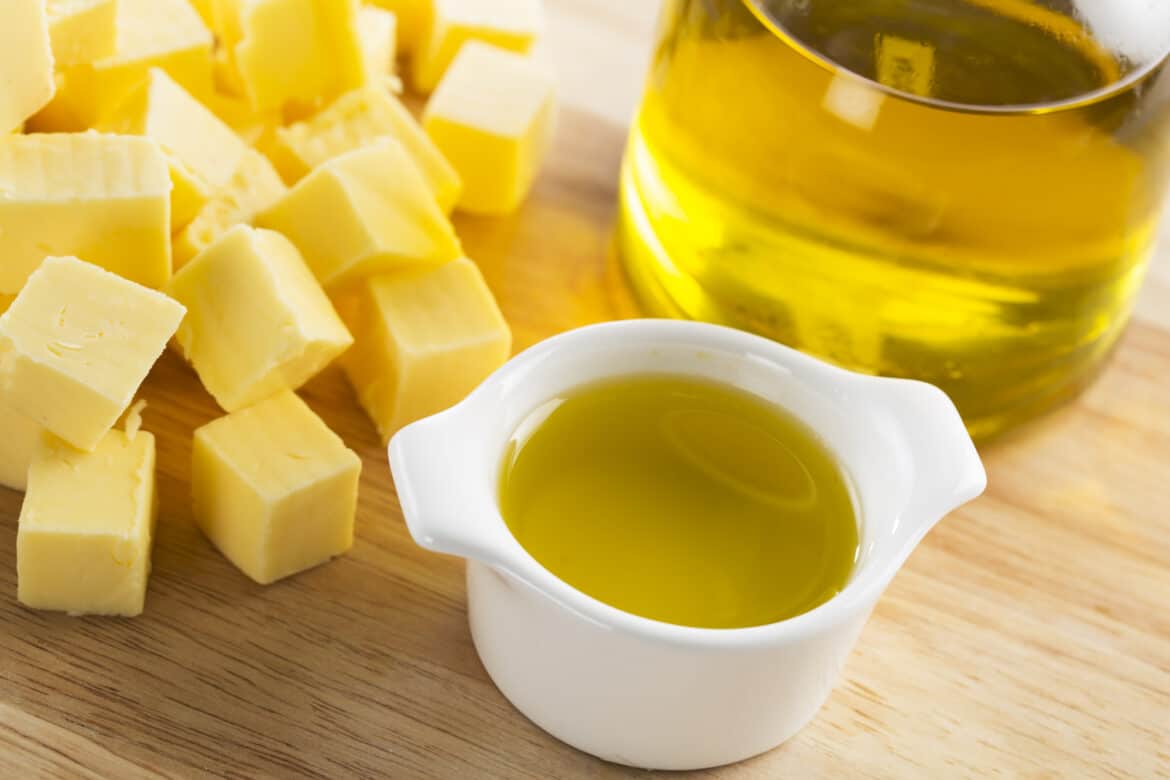 There are many oils and butter varieties you can cook with, and each of them has its unique properties, uses, and benefits. While olive oil has long been a popular cooking oil worldwide, ghee is widely used in Asian cooking.

When it comes to frying, sautéing, dressing, and marinating, nothing beats a dash of ghee or olive oil to bring out the natural flavors of your dish. So simple yet so effective, these flavorful additions are sure to satisfy your tastebuds.

But what is the difference between ghee and olive oil? Aside from having separate culinary uses, ghee is just clarified butter with a nutty flavor, while olive oil is extracted from whole olives and has a pungent and bitter taste that can vary in intensity.

In this article, we have broken down all aspects of ghee and olive oil to show you the key differences between these two products.

Originating in India, ghee is a staple in Asian cooking, just like olive oil is all around the world.

Ghee is butter that has been clarified and separated from milk solids and water. In other words, it is clarified butter consisting only of fat.

Ghee is typically clarified using butter made from cow’s milk. But it can also be made from buffalo-milk butter or contain spices that give it unique notes of flavor.

What Is Olive Oil?

Obtained from olives, olive oil is considered one of the must-have ingredients in any kitchen. Ranging from refined to extra virgin, this oil is almost irreplaceable for some cooks.

Olive oil is produced by pressing whole olives. This is what gives this oil a distinct flavor that is easily distinguishable in any dish.

Olive oil is the finishing touch on many dishes, somehow making them complete with just a drizzle.

Ghee and olive oil, while interchangeable under some circumstances, are quite different in many aspects.

The flavor of ghee depends on the temperature at which it has been clarified.

Low clarification temperature, such as 212°F or below, produces ghee butter that has a relatively milder flavor often described as curdy. When butter is produced at 248°F or higher, the flavor is more prominent.

As opposed to regular clarified butter, ghee is cooked longer. This gives it a nutty flavor from the browning of the milk content in the butter. Some also describe the favor of ghee as sweet and somewhat smokey.

It should be noted that ghee produced at a lower temperature retains its flavor for a few months. But once it starts deteriorating, you will notice changes in flavor.

Ghee clarified at a higher temperature, on the other hand, maintains its qualities for a longer time.

The taste of olive oil depends on a range of factors, including the type of olives it is made of, age, processing, etc.

Overall, the flavor profile of olive oil is generally described as bitter, pungent, and peppery, but it can be much milder depending on the process used to extract it from the olives.

Uses For Ghee Vs Olive Oil

Ghee finds many uses in the kitchen, especially in the countries of South Asia. Compared to oils and, including olive oil, ghee is used in smaller amounts. It is pure fat and is used to enhance the flavors in the dish.

As ghee is clarified butter, you may be mistaken to think that it can be used as regular butter. Ghee is much greasier and will not work for your morning toasts.

Ghee is best used for sautéing and pan-frying. It is also used in roasting. In Indian cuisine, ghee is often brushed on naan or roti bread before serving.

Once you get used to using ghee in your regular cooking, you may find it useful in stews and soups, as well as specific baking recipes.

Olive oil has a wider range of uses and this is what makes it a kitchen staple. From pasta and pizza to all kinds of salads, you can drizzle olive oil on top and take your dish to the next level.

Olive oil is also used in making marinades, dressings, and sauces. When it comes to cooking with heat, olive oil is best used for pan-frying.

Extra virgin olive oil is not suitable for deep frying. However, both ghee and olive oil can be used to season a cast iron pan.

Can You Substitute Ghee for Olive Oil?

Because of its liquid texture and pure fat content, ghee is a better substitute for oils rather than butter, as some may think.

For example, you probably won’t spread this on your toast in the morning because it won’t behave like butter. Instead, you may end up with a soggy, greasy mess, like you would if you were to spread plain oil over it.

However, as we mentioned, it will work great on naan or roti, as oils complement flatbreads. They cling to the surface to add flavor without seeping into the bread and ruining its texture.

You can substitute olive oil with ghee in such cooking tasks as pan-frying, as well. Ghee won’t burn, even when cooking at higher temperatures. It also makes a great substitute for sesame oil.

Olive oil and ghee are suitable for medium to high heat cooking.

Ghee has an approximate smoke point of 482°F. As for olive oil, the smoke point largely depends on the type and quality of the oil.

While the smoke point of refined olive oil varies from 390-470°F, virgin and extra virgin olive oil have a lower smoke point, ranging from 320-410°F.

Ghee is made by clarifying butter from milk solids and any liquid content, which leaves it in the form of pure fat. Thus, ghee doesn’t contain carbs.

The vitamin and mineral content of ghee very much depends on what kind of butter it has been clarified from.

Olive oil, compared to ghee, contains a much lower amount of saturated fat. The latter, when consumed more than needed, will lead to an increase in cholesterol levels.

Olive oil is higher in monounsaturated fats, which are healthy for you.

Both olive oil and ghee are high in calories. So, if you’re counting calories, you may need to limit your intake of these products.

As you can use olive oil raw in many recipes, such as dressings or drizzled on top of dishes, it can be beneficial to your health. Extra virgin olive oil is certainly higher in antioxidants and vitamins.

Here is a table comparing the nutritional value of one tablespoon of ghee and olive oil.

Which One Is Healthier?

While ghee and olive oil don’t differ much as far as the calorie count and fat grams are concerned, there are a few differences in the content of these two ingredients.

Both ghee and olive oil stand out for different reasons and may be healthy if used in moderation.

Here are the health benefits of ghee:

And here are some of the benefits of olive oil:

The shelf life of ghee is around 3 months if you store it in your pantry or somewhere cool and dry. You may still get some use out of your ghee butter after its best-by date if you keep the lid of the container tightly closed at all times.

You can also store ghee in the fridge, where it will last up to 12 months. Ghee stored in the fridge changes its liquid texture and solidifies.

The shelf life of an unopened bottle of olive oil is around 24 months. Once opened, you should use it up within a few months before the quality deteriorates. It will be good to use for up to 12 months if the bottle is tightly sealed.

Like ghee, olive oil should also be kept in a dark and dry spot. You can store it in the fridge, too. While doing this won’t affect the quality of the oil, solidified olive oil is not as convenient to use as ghee, as the latter generally comes in a jar.

Both ghee and olive oil are perishable and will eventually turn rancid.

Up Next: The 5 Best Oils For Fried Rice