White Spots On Cheddar Cheese – Is It Safe To Eat? 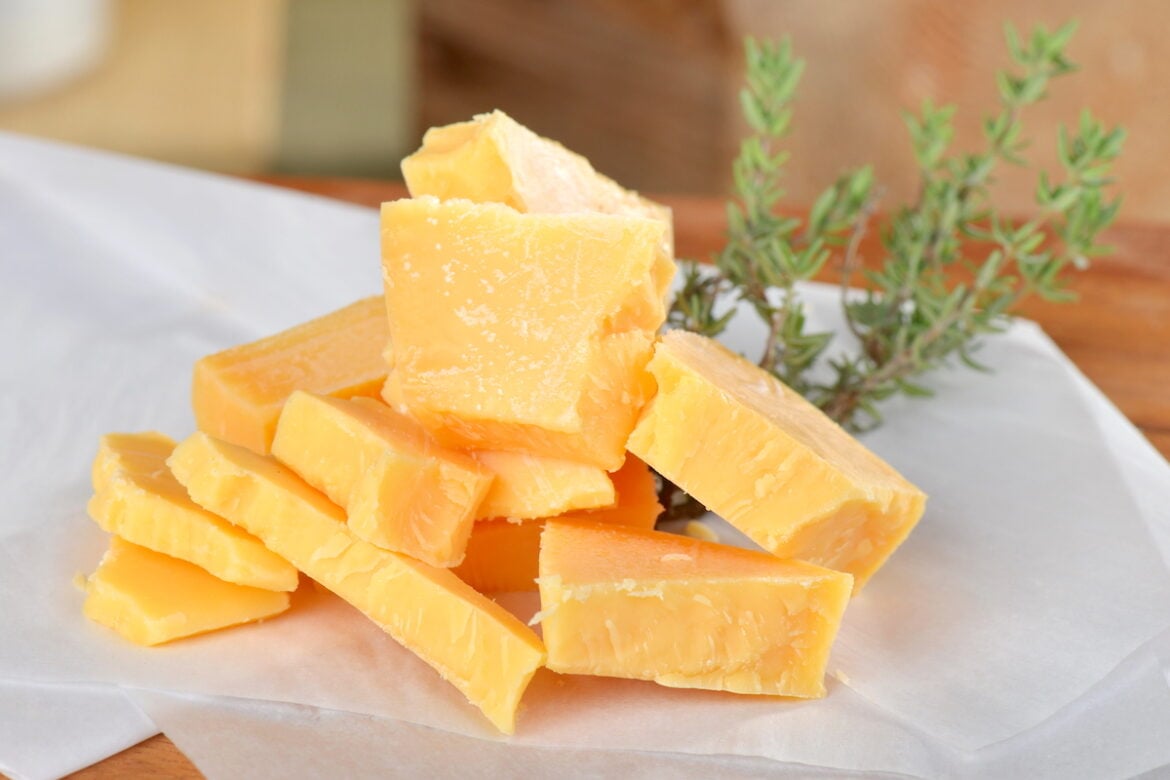 Good quality cheddar cheese is a precious ingredient. It is only natural that many people are alarmed by the white spots appearing on the outside and inside their cheddar cheese.

Continue reading to learn what exactly are those white spots on cheddar cheese, why and how they form, and how to tell the difference between cheese crystals and mold.

What Are White Spots On Cheddar Cheese?

If you love artisan cheddar cheese, you may have noticed white spots on it at least once. Sometimes these spots look alarming as they make it seem like there is something wrong with your cheese.

In reality, these white spots are cheese crystals and they are completely harmless. These crystals form as a result of the cheese’s aging process.

According to scientists and cheesemakers, there are two types of cheese crystals – calcium lactate crystals and tyrosine crystals.

Calcium lactate crystals appear as pale white spots or streaks on the surface of the cheese. They may also develop in the paste too, i.e. in the interior of the cheese.

Unlike calcium lactate crystals that can form on the outer surface of the cheese and also inside it, tyrosine crystals usually form only in the interior of the cheese.

Why And How Do Cheese Crystals Develop?

To understand how and why cheese crystals develop it is important to know how cheese is made.

Most cheese varieties, including cheddar, are made with a starter culture. A starter culture is bacteria that is used to transform milk into cheese through fermentation.

As cheese ages, the cultures in it eat more and more lactose which is the sugar found in milk. This causes the lactic acid levels to rise. This lactic acid then binds with the calcium present in cheese, forming calcium lactate crystals.

As for tyrosine crystals, they form when the amino acids called tyrosine break down and cluster forming crystals.

It is common for cheese to have only one type of cheese crystals. But in certain cases, you may find calcium lactate and tyrosine crystals in your cheese at the same time.

If you’d like an in depth scientific explanation, here’s a great video from The American Cheese Society on YouTube.

Are Crystals In Cheese Good?

If you spend a lot of time in the cheese aisle, you may have noticed that many aged cheeses have white spots on them. This is because some manufacturers do prefer to have their cheese with crystals.

Cheese crystals are considered to be an indicator of high-quality well-aged cheese and artisan cheddar is not an exception.

With this said, cheese crystals are not a good thing for industrial cheddar. In this case, they are considered a quality defect.

If you notice white spots on the industrial cheddar you are using, it might be a good idea to buy cheddar from another cheese manufacturer next time.

Is Cheddar Cheese With White Spots Safe To Eat?

Cheese with crystal formations in it is completely safe to eat.

Moreover, cheese crystals don’t affect the flavor of the cheese. Some people even like the crunchy texture these crystals add to hard cheeses.

How Do You Know If White Spots On Cheddar Is Mold?

Cheese crystals don’t make cheddar and other cheeses taste different. But the crystals cause the cheese to lose its visual appeal.

Many people take these spots as mold or a sign that the cheese is bad. As a result, they may toss completely good cheddar cheese or don’t buy it at all.

Calcium lactate crystals in particular may be difficult to distinguish from white mold that may also appear on cheese. How do you know if the white stuff on cheddar is cheese crystals or mold?

Calcium lactate crystals appear as white bits on cheddar cheese and inside it and look very similar to mold.

Here are a few tips to help you determine whether it is mold on your cheddar cheese or calcium lactate crystals.

Is Moldy Cheddar Okay To Eat?

Molds are used to make different types of cheese, including Roquefort, Gorgonzola, and Stilton. But uninvited mold on cheese is certainly not good.

For hard and semi-soft cheeses, including cheddar cheese, it is okay to cut out the moldy part and eat the rest of the cheese.

This is because mold doesn’t penetrate far into these types of cheeses. In the majority of the cases, mold doesn’t even spread beyond the surface of hard cheeses.

This is not the case for soft cheeses, such as cream cheese, cottage cheese, and ricotta. Mold can easily contaminate the entire container of cheese. So, removing the moldy parts doesn’t eliminate the risk of contamination and food poisoning.

If you notice mold on shredded or crumbled cheese, discard all of it instead of trying to remove the moldy bits.

How To Prevent Cheese Crystals On Cheddar Cheese

Now you know that cheese crystals are not harmful and it is completely safe to eat cheddar with white spots on it. Still, you may wonder if there is a way to prevent cheese crystals from forming on cheese.

Cheese manufacturers can take certain steps to prevent the formation of cheese crystals that often comes as a production defect.

Cheesemakers may keep the lactate levels low by washing the curd thus preventing the formation of calcium lactate crystals. They may also lower the calcium levels in cheese.

Tight packaging is another way to prevent the formation of cheеse crystals on the surface of the cheese.

How Do You Know If Cheddar Cheese Has Gone Bad?

Properly stored cheddar cheese will last in the fridge for around a month. Cheese crystals may develop on it earlier though as you already know cheddar with cheese crystals on it is still good and completely safe for consumption.

But there are signs that indicate that cheddar cheese is no longer good and it’s time for you to get rid of it. We have already told you that moldy cheddar cheese can still be consumed if you manage to cut out the affected parts.

There are other signs that indicate that cheddar cheese is bad and should be discarded.

You may check the expiration date to find out if the cheese is still good or not. However, these dates are not always accurate and you may throw away completely good cheddar cheese.

And what if the artisan cheddar you have bought doesn’t even have an expiration date?

Here are the signs that give away bad cheddar cheese:

To make your cheddar cheese last as long as possible, wrap it tightly in food wrap or aluminum foil or keep it in a sealable plastic bag. As for shredded cheddar, keep it in an airtight container or bag.

White Spots On Parmesan Cheese – What Does It Mean?

Best Types Of Cheese For Salads